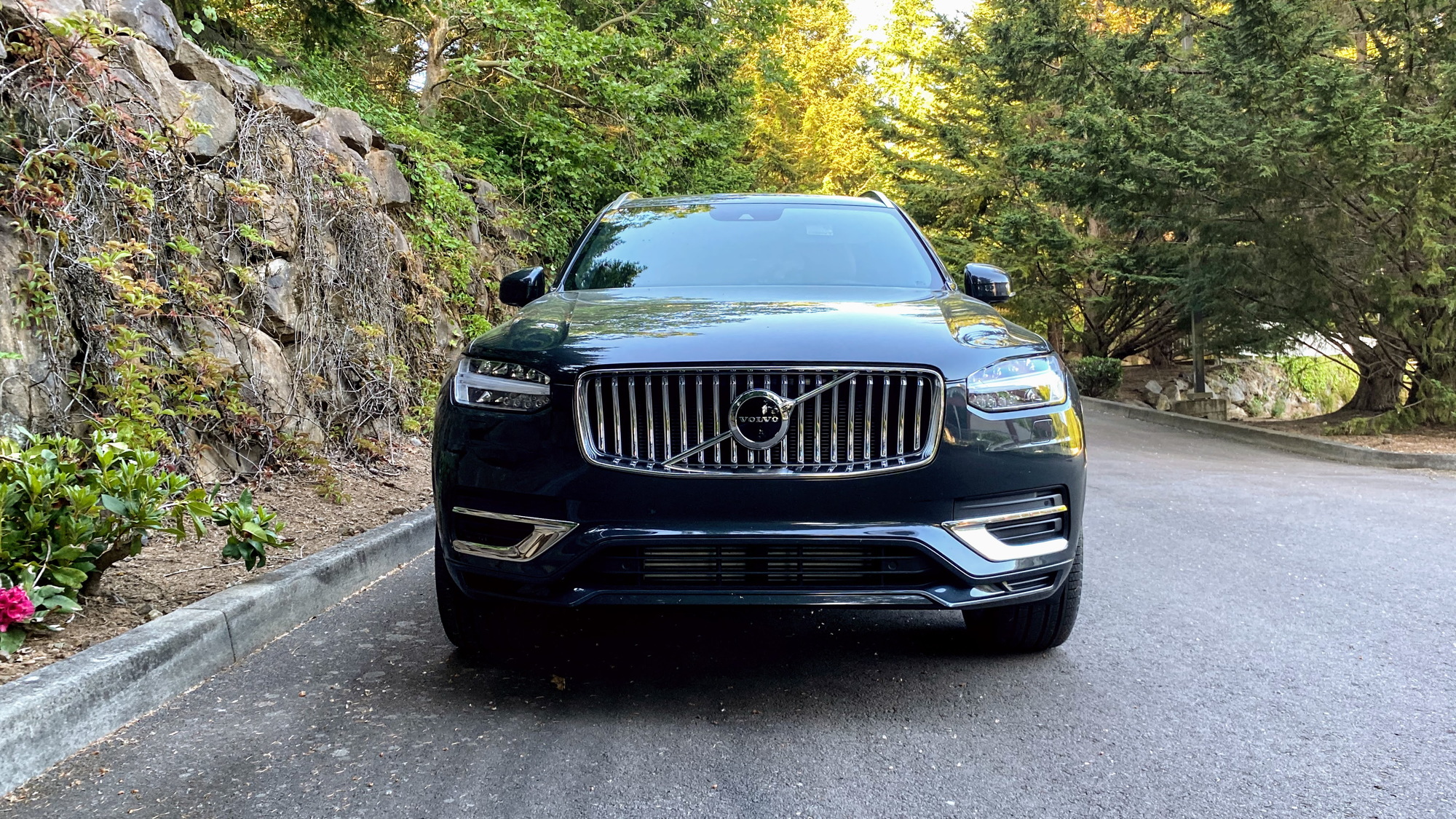 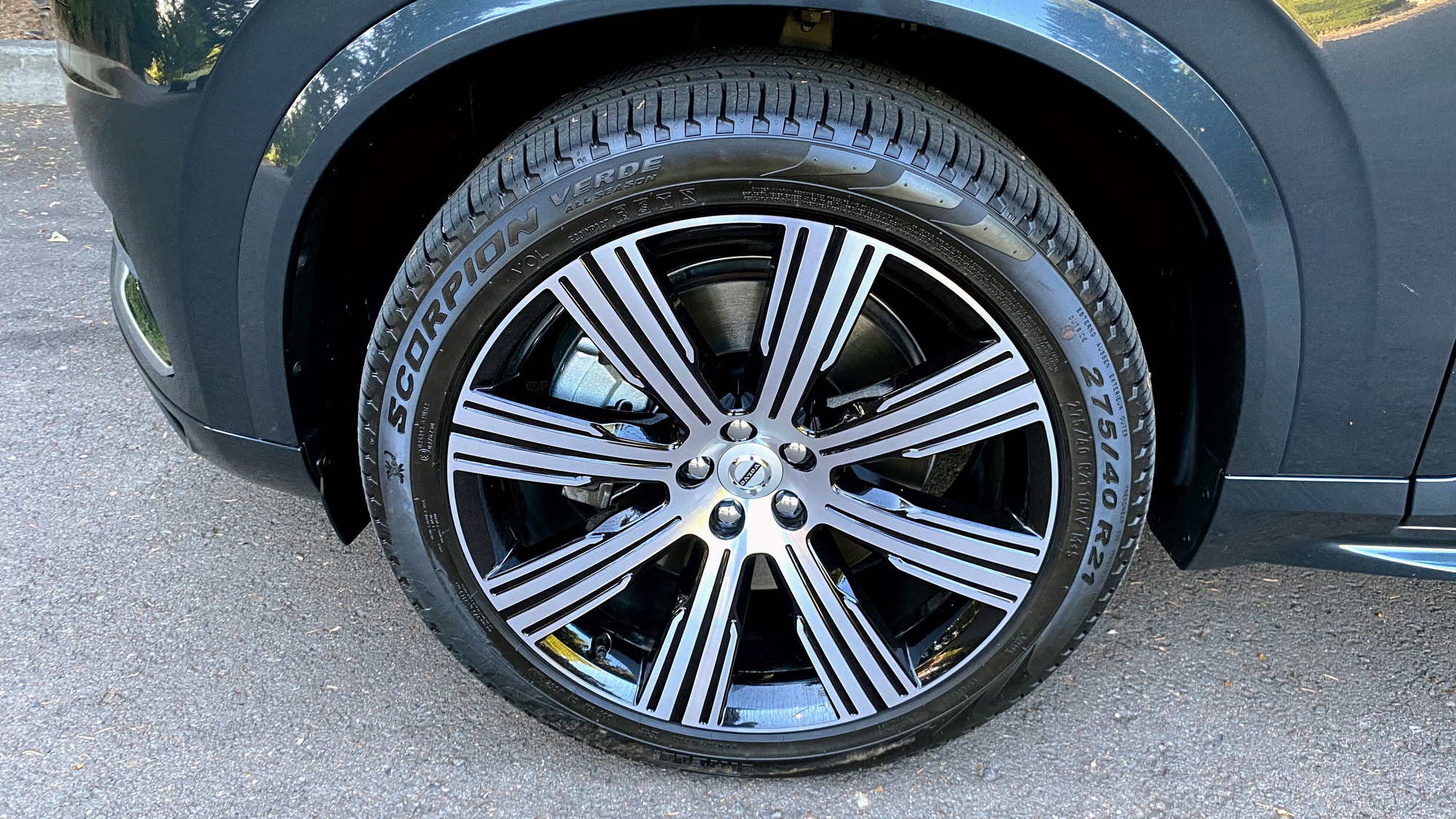 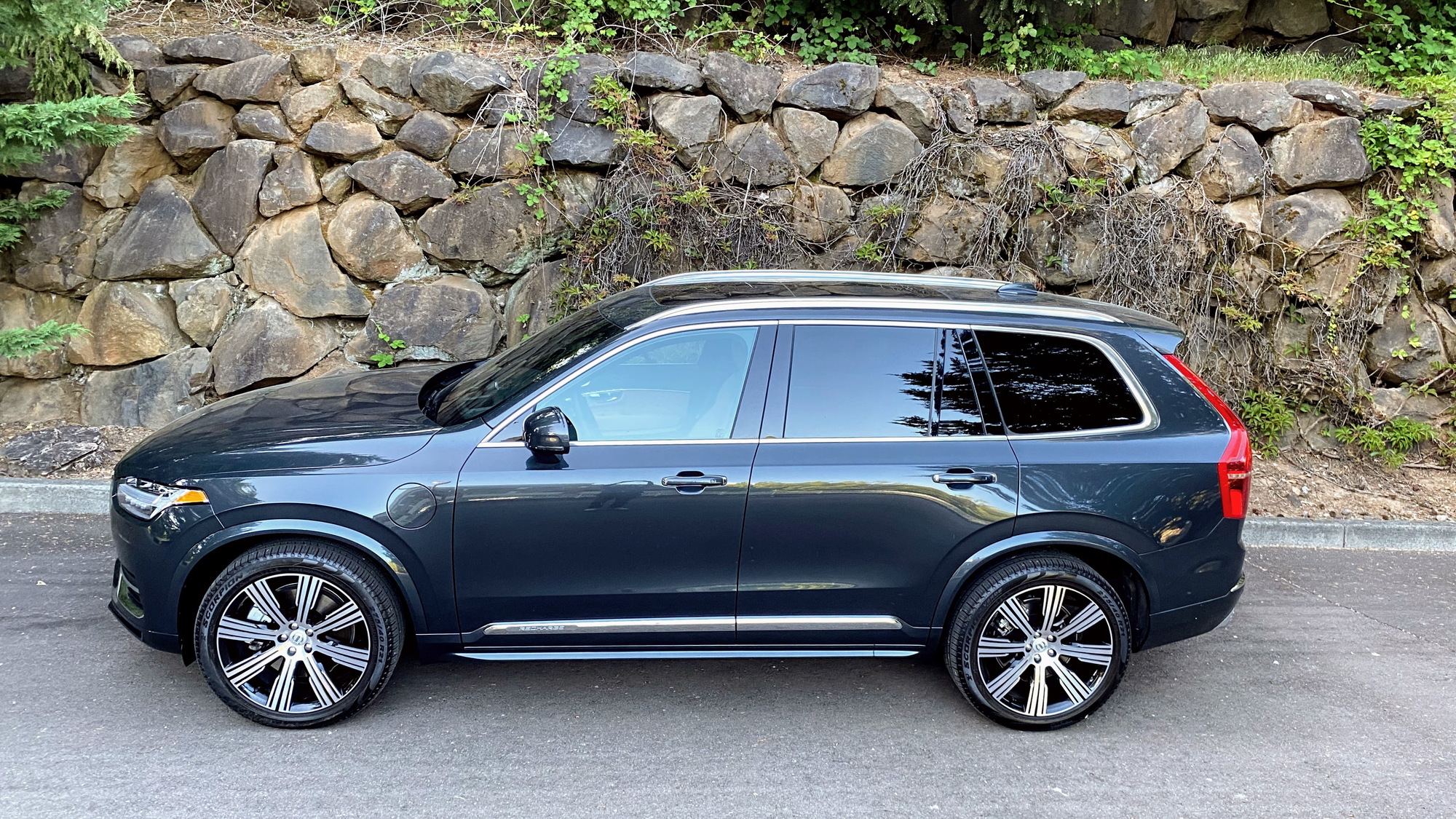 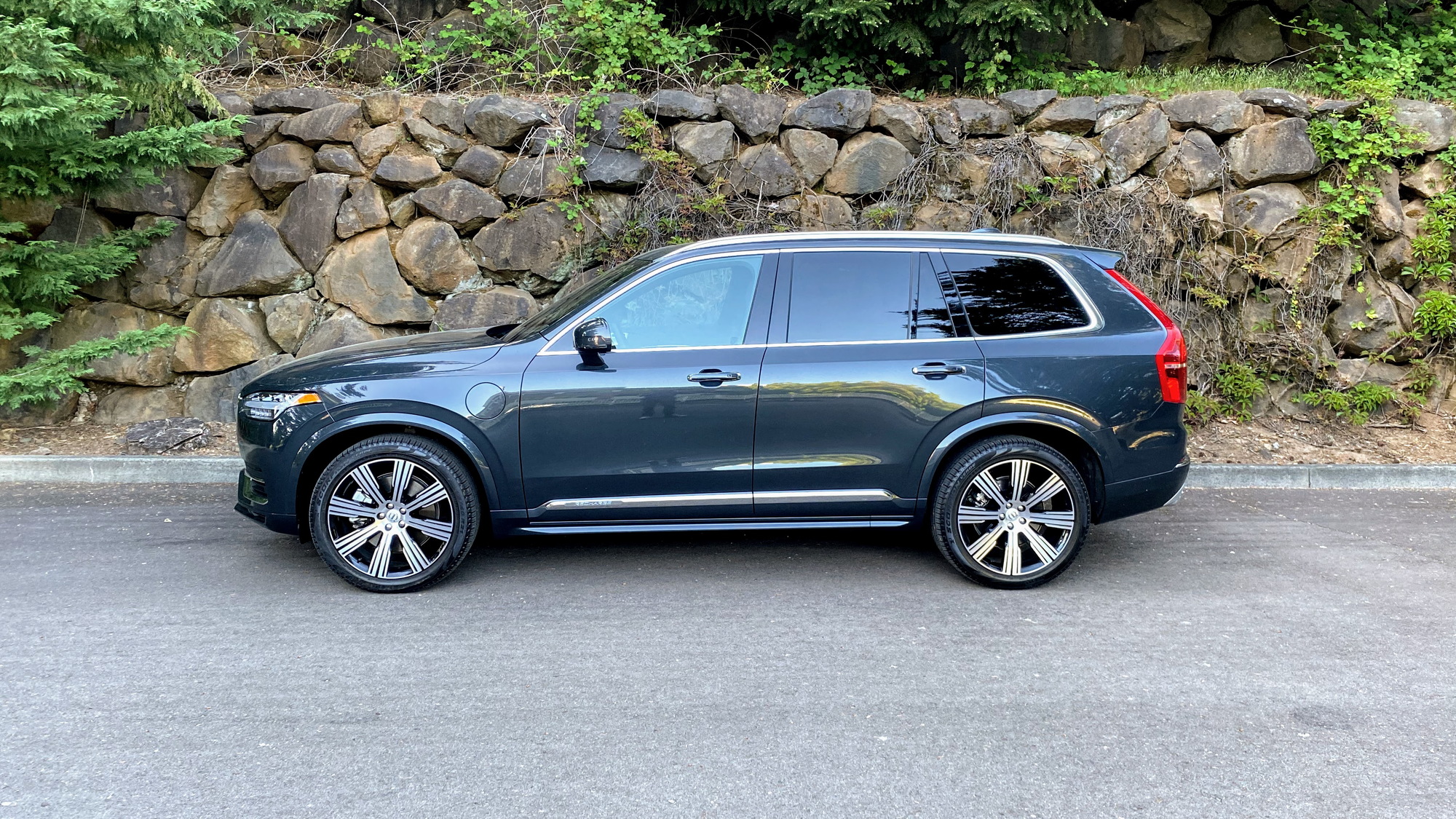 Volvo’s latest plug-in hybrids are resonating with shoppers. They look fantastic, satisfy drivers, and manage to offer up a nourishing experience without the garish gloss of some luxury alternatives. And after dropping prices on its PHEVs last year, they’re making up roughly 1 in 5 U.S. vehicle sales for Volvo.

But if your appreciation of vehicles from the Swedish automaker goes back 20 years or more, you might find a thread of continuity between vintage Volvo 240 and 740 wagons and the latest PHEVs, including the 2021 Volvo XC90 Recharge. The XC90 Recharge isn’t in any hurry whatsoever—if you want to go tailpipe-emissions-free, that is.

Select the “Pure” mode at startup—instead of the default “Hybrid”—and control any urges to accelerate quickly, and the XC90 will travel close to the average U.S. daily commute distance without burning a drop of gasoline. 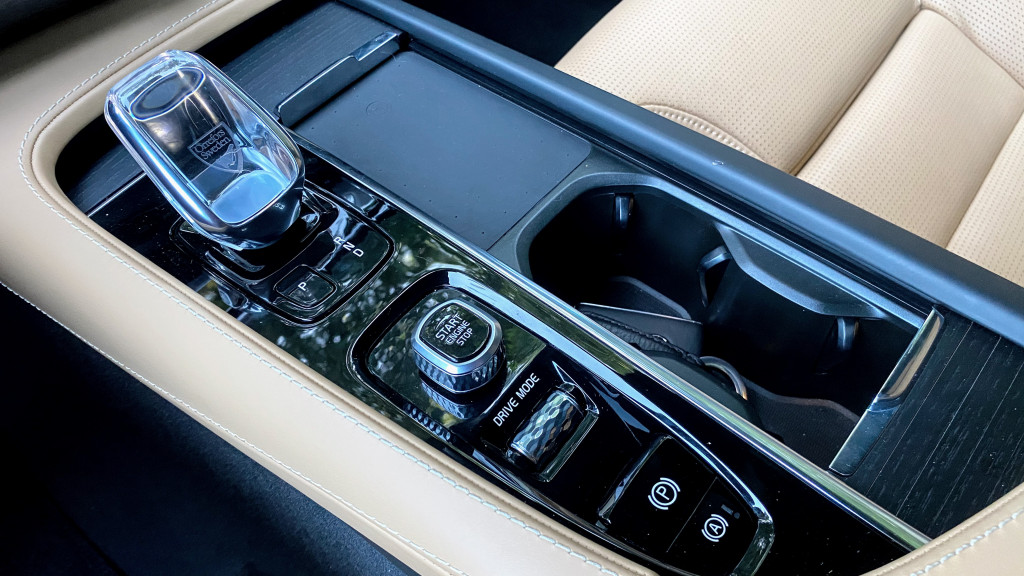 It’s probably our biggest gripe about the Recharge. Although Pure sounds like all-electric, there’s no way of actually locking in electric mode. For those aiming to stay electric on the commute it ends up being a bit of a cat-and-mouse game.

In a recent enjoyable stint I managed to easily beat the EPA range rating of 18 miles all-electric over multiple charges and driving conditions. However, in combined driving as a hybrid—without a plug-in charge—the XC90 Recharge didn’t demonstrate a high level of fuel efficiency.

Here’s how Volvo’s interface works. You learn to rely heavily on a dynamic gauge on the right side of the gauge cluster that shows—relative to accelerator input—how wide your all-electric zone is (illustrated by a little charge icon) and where the gasoline engine starts (shown with a little drop of fuel). In Hybrid mode especially, that point is always changing, based on conditions, so it offers a series of teachable moments on how to get the most out of the hybrid hardware. 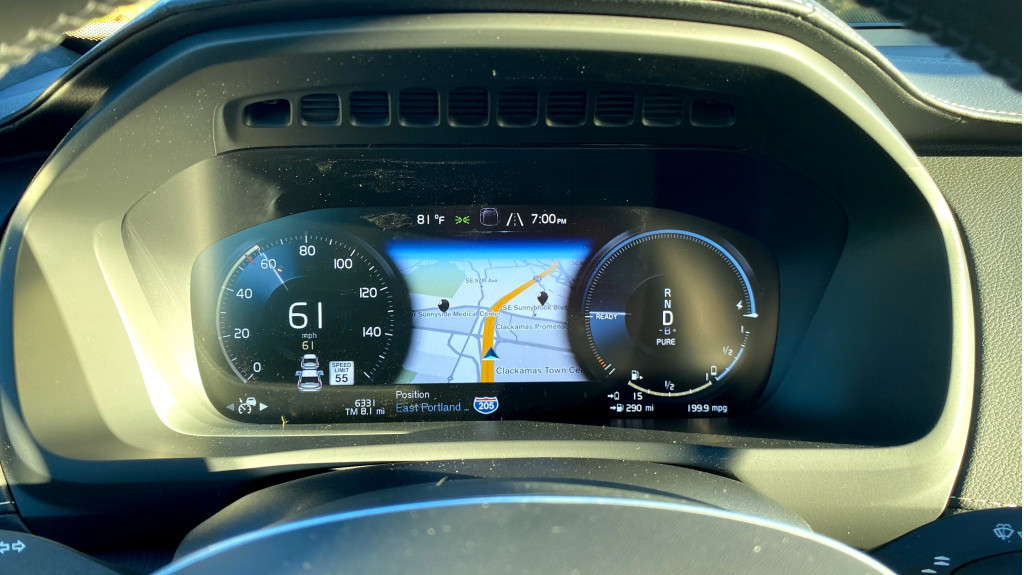 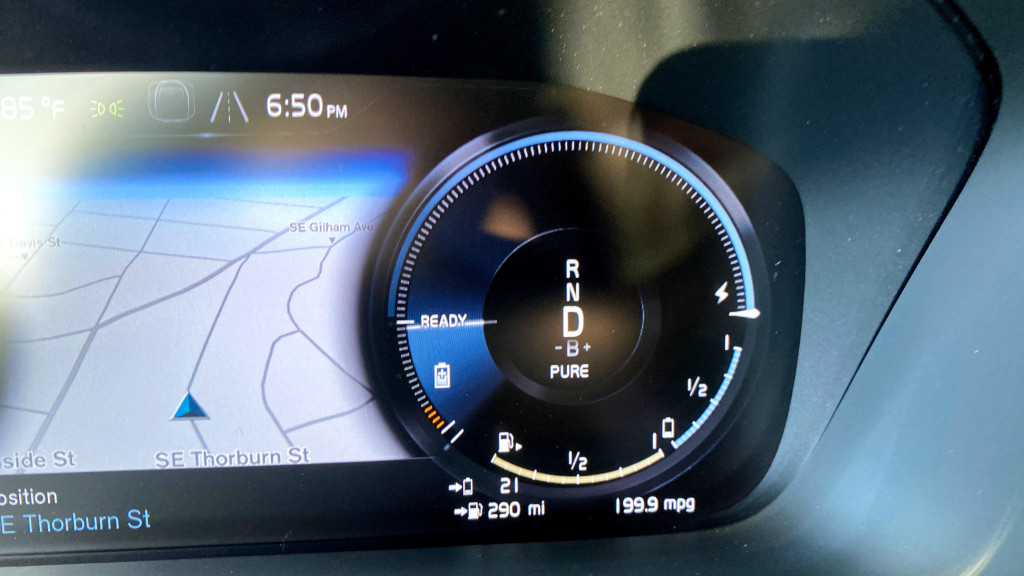 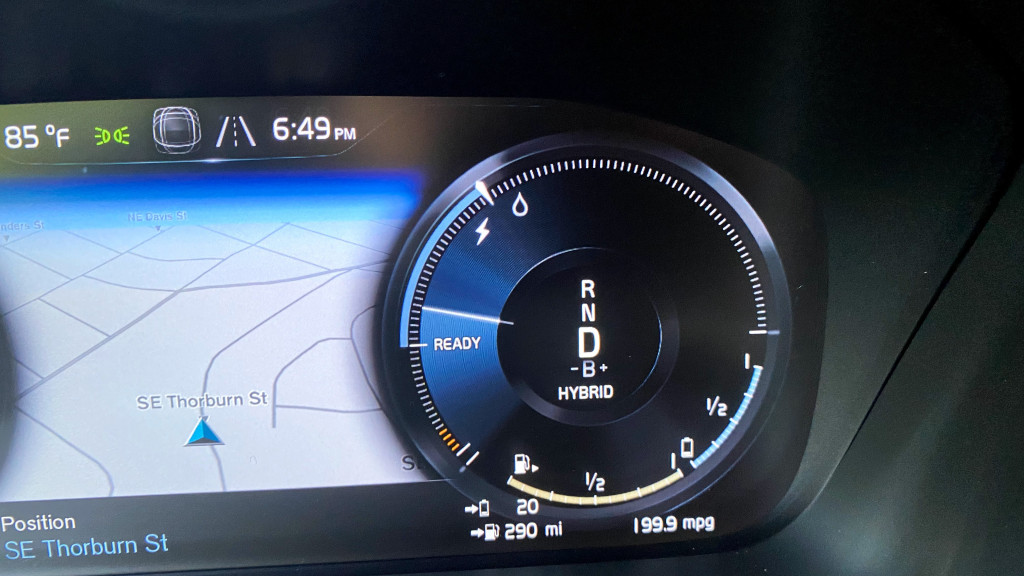 This way of contending with electric and gasoline power sources isn’t exclusive to Volvo, we should add. Automakers split into two schools on plug-in hybrids a decade ago. On one side was the Chevy Volt, which used the gasoline engine mainly as a range extender and didn’t perform much differently whether it was on or not. On the other side were the vast majority of other plug-in hybrids, focused on using the plug-in energy to boost the vehicle’s efficiency.

We know that plug-in hybrids are a bridge to electric vehicles. So does Volvo, which has been making its battery packs larger as the technology advances, on the way to a fully electric XC90 due in 2023 that will be made alongside the gasoline version. For 2020, the XC90 stepped up to an 11.6-kwh battery pack, versus a 10.4-kwh pack for 2018 and 2019 models and a 9.2-kwh pack before that. Those boosts haven’t raised the XC90 Recharge’s gas mileage—remaining at 27 mpg combined when operating without a charge, as a hybrid—but it has nudged the official electric range up to its present number.

It wasn’t until I really stomped my right foot down that I realized how well this combination can hurtle its 5,100 pounds of curb weight forward. The XC90 Recharge comes with a 313-hp, 2.0-liter turbo-4 engine, with an 87-hp electric motor, as part of a system that sends power to all four wheels via an 8-speed automatic transmission. There’s a 34-kw starter-generator motor, too. Peak power is 400 hp and 402 lb-ft of torque, and the powertrain feels docile and easygoing most of the time. The engine can be clutched out of the flow, allowing electric-only driving, but as you can imagine, it’s that 87-hp motor, at the rear wheels, that limits the experience. 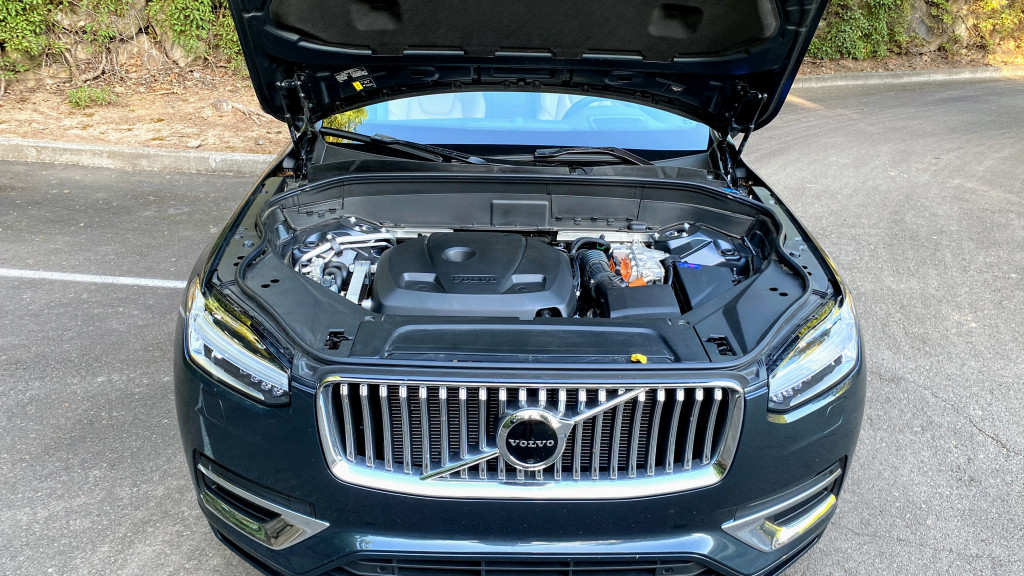 The T8 has a maximum speed of 78 mph in electric mode, but Volvo indicates that low temperatures can also affect it. In the Pure setting, I briefly hit 74 mph with some careful feathering of the accelerator versus the droplet display.

With a fresh charge, I followed a route I’ve taken with other plug-in hybrids. It starts with a mile of neighborhood streets, then 8 miles on the freeway at about 65 mph, then 8 miles on a 50-mph road with occasional stoplights, then the rest of the route on a 30-mph street with more frequent stoplights. I went an impressive 25 miles on electricity.

This was an ideal run based on the conditions—including a 74-degree ambient temperature and the climate control set to 72 degrees. I did the same run in a 2020 XC90 Recharge in 47-degree temps and went 19 miles.

After a full charge, this time with a 79-degree ambient temperature, I drove a different route at faster freeway speeds, most of it at around 65 mph, with my speed varying from 55 to 70 mph. This time the XC90 Recharge went 21 miles before switching to hybrid mode.

Without a charge, and just running in hybrid mode, the test XC90 Recharge didn't show it was getting close to its 27-mpg EPA rating, though. I saw 21.5 mpg over about 70 miles, but that's really too short of a trip to be conclusive. 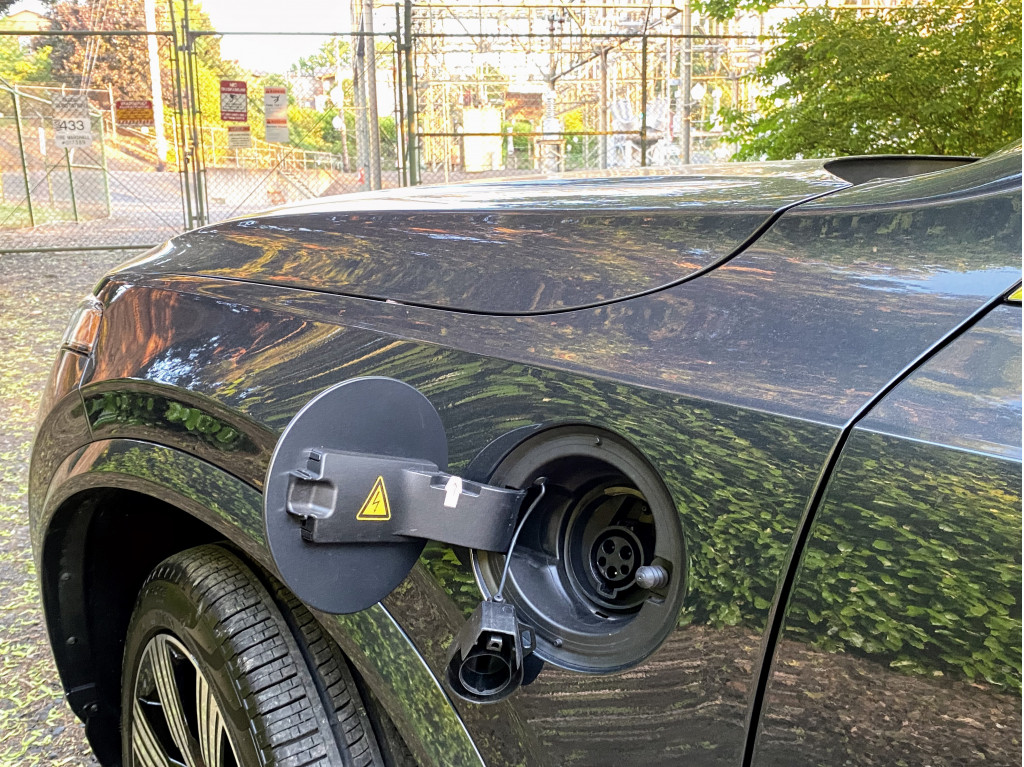 One asterisk for the experience: The XC90 is a noisy charger. With outside temperatures in the 70s, the XC90’s cooling fan ran intermittently like an air conditioning compressor while the car charged on my garage wallbox—leading to multiple checks that I hadn't left the car or its cabin climate control on.

The XC90 Recharge makes no sacrifices for the sake of kilowatt-hours. Three rows of seating fold easily, and down to a flat cargo floor. Perhaps that’s why Volvo didn’t opt for a larger battery.

The seats are superb. I’m 6-foot-6 and I like how the perches provide long-legged thigh side support with an underlying firmness. But we’ve observed that much shorter drivers feel just as well-accommodated in the XC90. 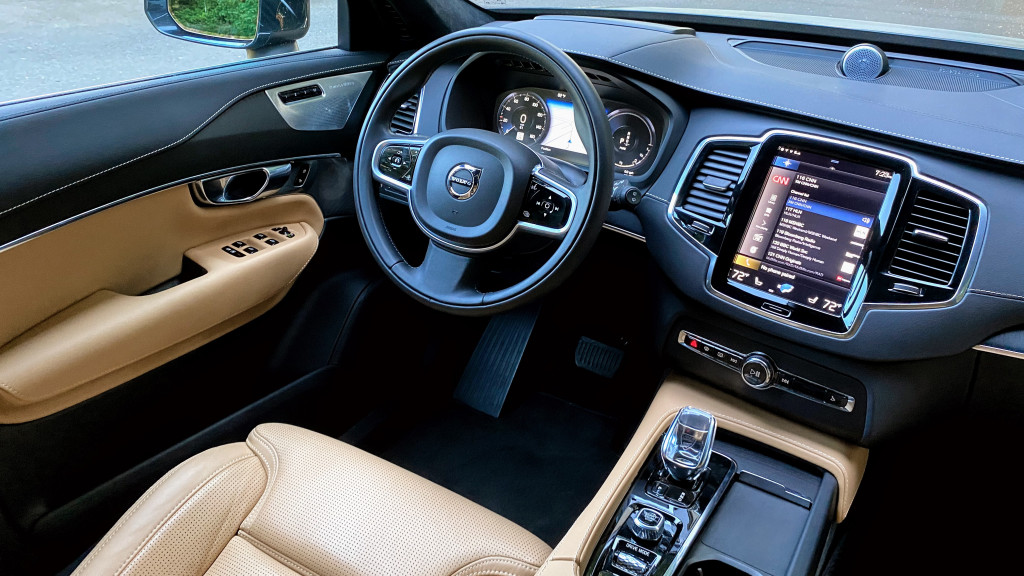 The XC90 Inscription, as tested, cost $81,690 and was loaded to the brim with luxury features. The luxurious Inscription model I had starts at $69,750 and included heated and cooled front seats, power front-seat cushion extenders, nappa leather upholstery, wood inlays, four-zone automatic climate control, 20-inch wheels, and Harman Kardon premium sound. It optioned that up with the $1,700 Lounge Package (massaging front seats), the $750 Climate Package (heated rear seats, steering wheel, and wiper blades), the $1,500 Advanced Package (head-up display and surround-view camera), the $3,200 Bowers and Wilkins sound system, the $1,800 four-corner air suspension, and several other upgrades—one of those being the integrated center booster cushion subs in for a booster seat for some kids (consult the owner’s manual).

That’s serious luxury-car territory, but in this case the XC90 feels the part. Now if only Volvo could work a bit more on making the Recharge feel the part as a messenger toward an all-electric future.