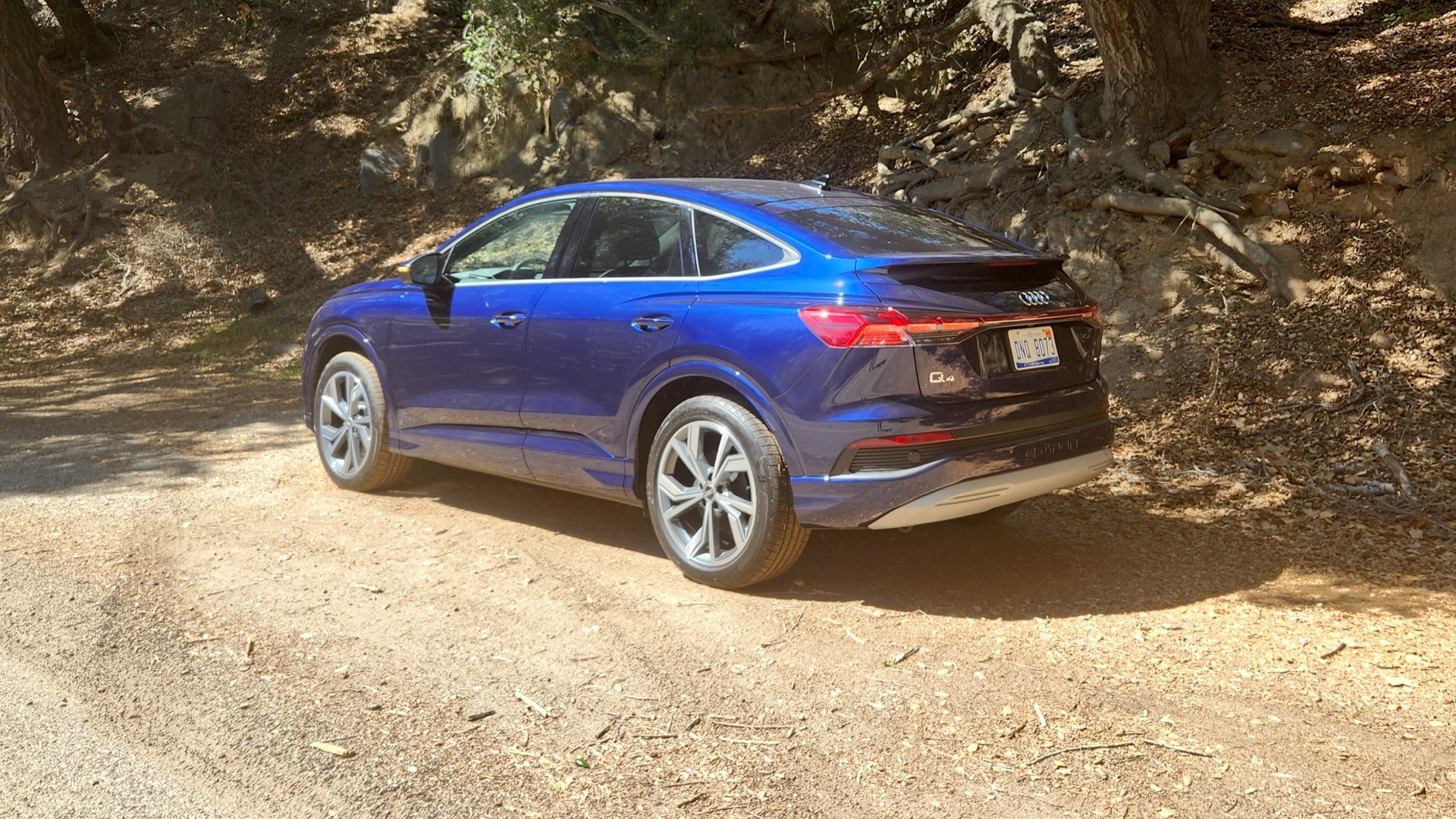 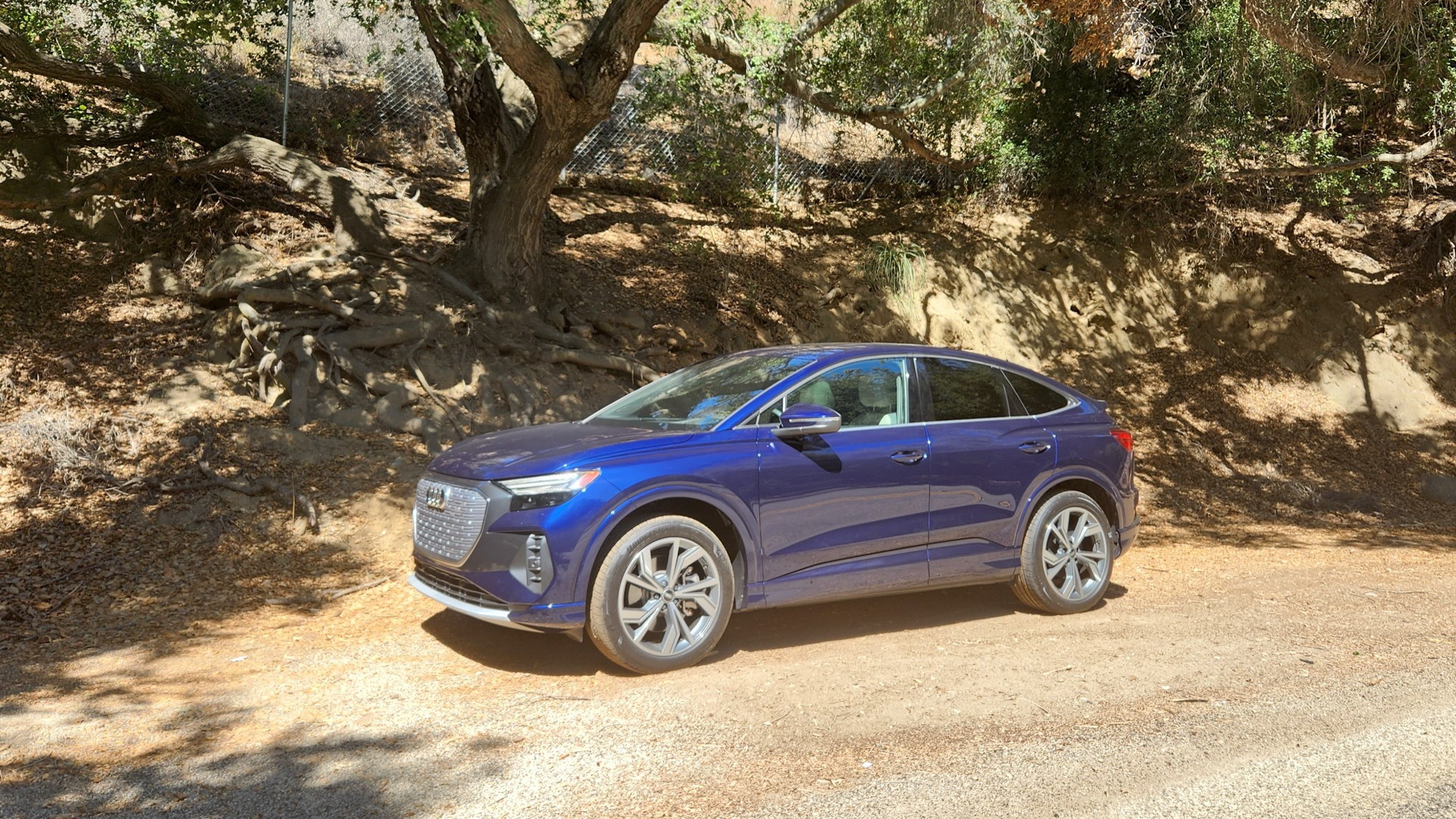 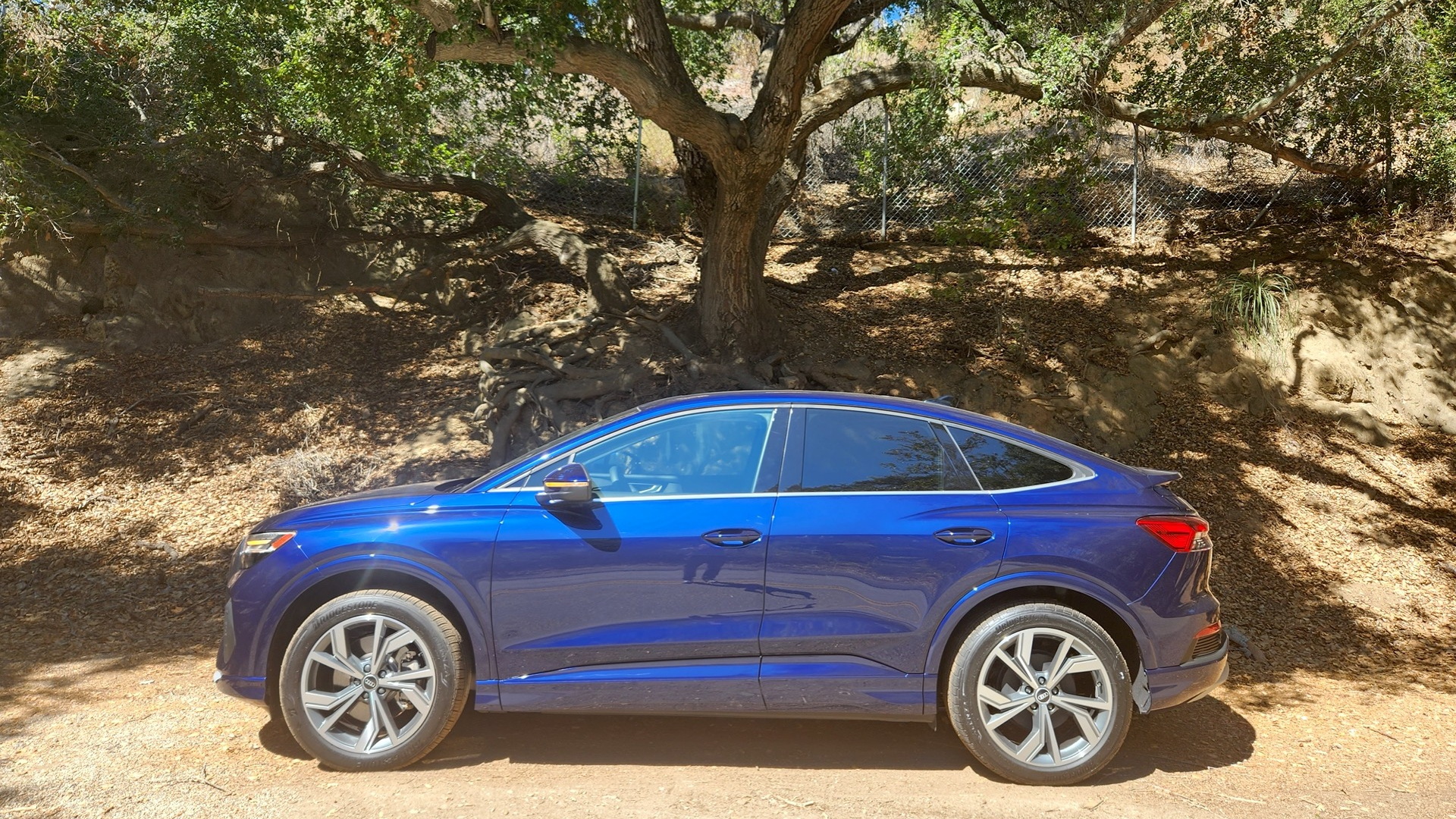 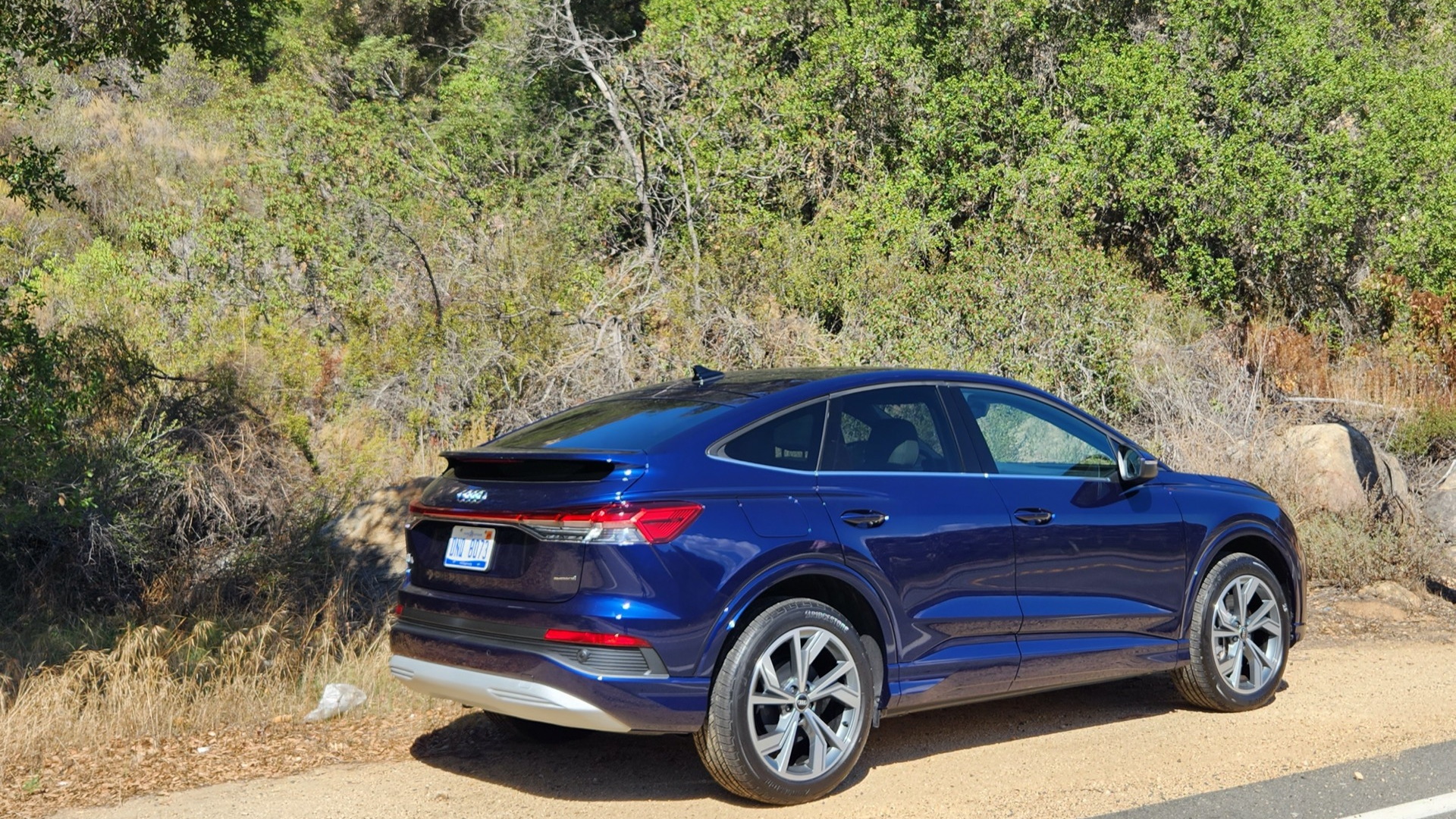 The 2023 Audi Q4 E-Tron gives the German luxury brand an all-electric entry in the popular compact crossover segment, making EV Audis accessible at prices of $50,000 and up. The brand’s large E-Tron SUVs and E-Tron GT sedan started at more than $70,000 and $105,000 respectively, and have sold in relatively modest numbers, so this is Audi’s chance to break out of the EV niche.

As with the larger E-Tron SUV, the Q4 E-Tron line offers two body styles: a conventional SUV shape, and a Sportback model with a more steeply raked tailgate. Comparing all-wheel-drive versions of the two, the sleeker Q4 Sportback 50 E-Tron has a slightly higher EPA-rated range of 242 miles, versus 236 miles for the more upright Q4 50 E-Tron quattro. The highest range comes from the Q4 40 E-Tron model with rear-wheel drive only, at 265 miles.

The Q4 line went on sale in late July for a very truncated 2022 model year—fewer than 2,000 are likely to be sold—but a larger selection of 2023 models offered with multiple powertrains will reach dealers starting in October. 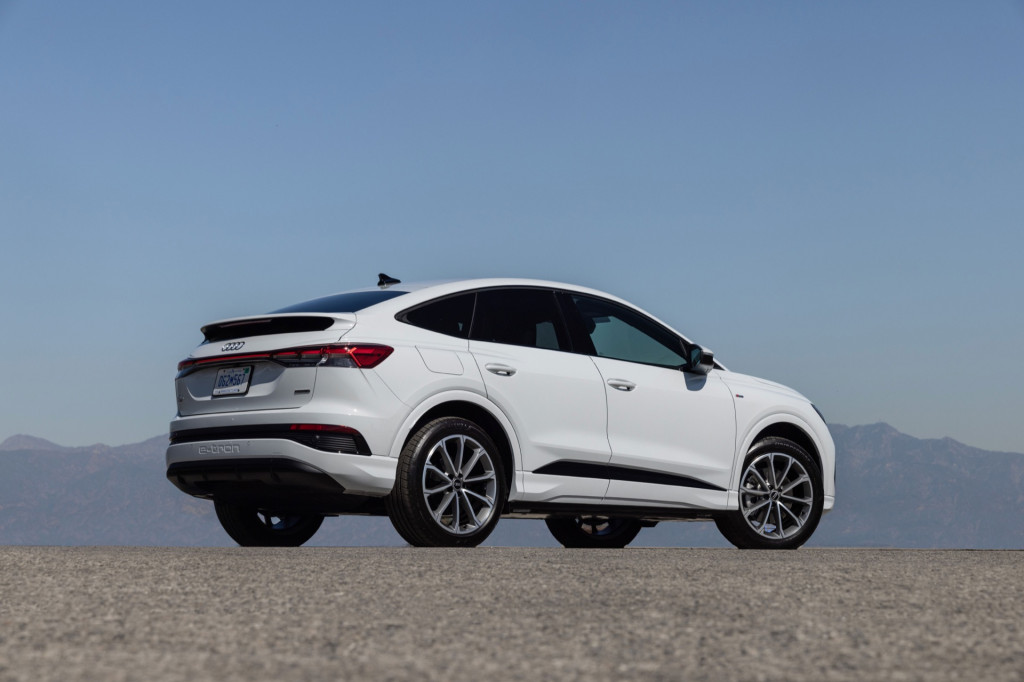 We tested an Audi Q4 Sportback 50 E-Tron, the all-wheel-drive fastback version, over 90 miles of suburban corridors and hilly mountain roads outside San Diego. We think it’ll serve Audi well as a lower-priced EV that’s otherwise right in line with the rest of the Audi range. But we have to note that other compact EV crossovers offer more range from smaller batteries.

In our drive, I found the Q4 e-tron doesn't offer the explosive acceleration of a Tesla Model Y, though its user interface is more traditional than the Tesla's everything-on-the-center-screen approach. Its road feel and suspension tuning is more sure-footed than those of the Genesis GV60, but it lacks that car's ability to charge at rates of 300 kw or more when the battery is largely depleted. It's also looking more space-efficient than the Mercedes EQB, although that comparison will have to wait until we can have them both side by side.

Familiar Audi appearance, inside and out

The standard Q4 E-Tron is instantly identifiable as a utility vehicle, with a longer third side window and a more upright tailgate. The Q4 Sportback E-Tron, on the other hand, has a triangular side window and a much more raked tailgate, giving it a tall fastback shape—and, due to peculiarities of EPA rules around measuring interior volumes, slightly more rear cargo space. Depending on trim and powertrain, wheels are 19 or 20 inches—and even still they don’t look all that huge on this tall utility vehicle.

Tastes will vary, but we found the standard E-Tron a more harmonious design in the classic Audi SUV vein. The Q4 Sportback, on the other hand, seemed too tall and thick through the middle for its fastback shape. It’s no sleek Audi A7 hatchback, that’s for sure. And the window in its tailgate is split into two pieces, similar to that of a Prius hatchback, visible through the rearview mirror with a bar running between them—and through the middle of your rearward vision. 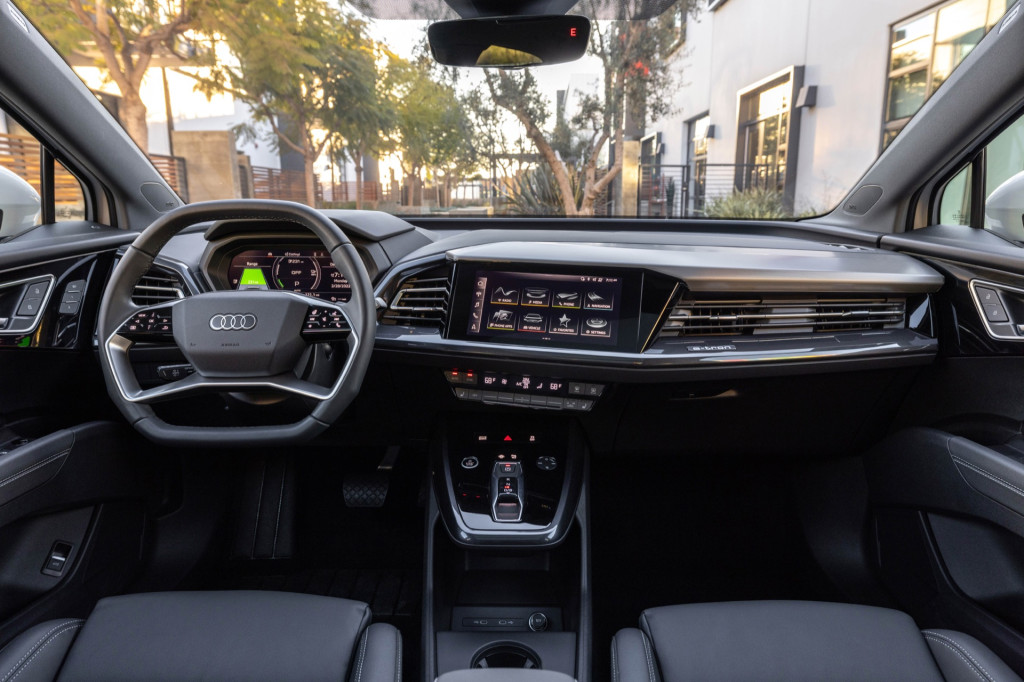 Inside, the Q4 is wall-to-wall standard Audi. The digital instrument cluster, 11.6-inch center touchscreen display, and ‘MMI3’ graphics and interface should all be familiar to drivers of other current Audis. Interiors come in black, brown, and beige, with an optional wood dash overlay and the usual array of brushed silver switchgear set in glossy piano-black surfaces.

From inside, except perhaps for the small sliding drive selector, you might never know the Q4 is powered by a battery and electric motors. Overall, the design is…well, very Audi.

Built on the VW Group’s MEB architecture for battery-electric vehicles, first seen in North America under the Volkswagen ID.4, the Q4 uses MacPherson struts at the front and a multi-link suspension for the driven rear wheels. It’s also the first Audi sold in North America for what’s likely at least two decades to use drum brakes, though only at the rear. With regeneration providing a substantial portion of the braking, Audi notes they’re better suited to infrequent use—as well as less expensive. 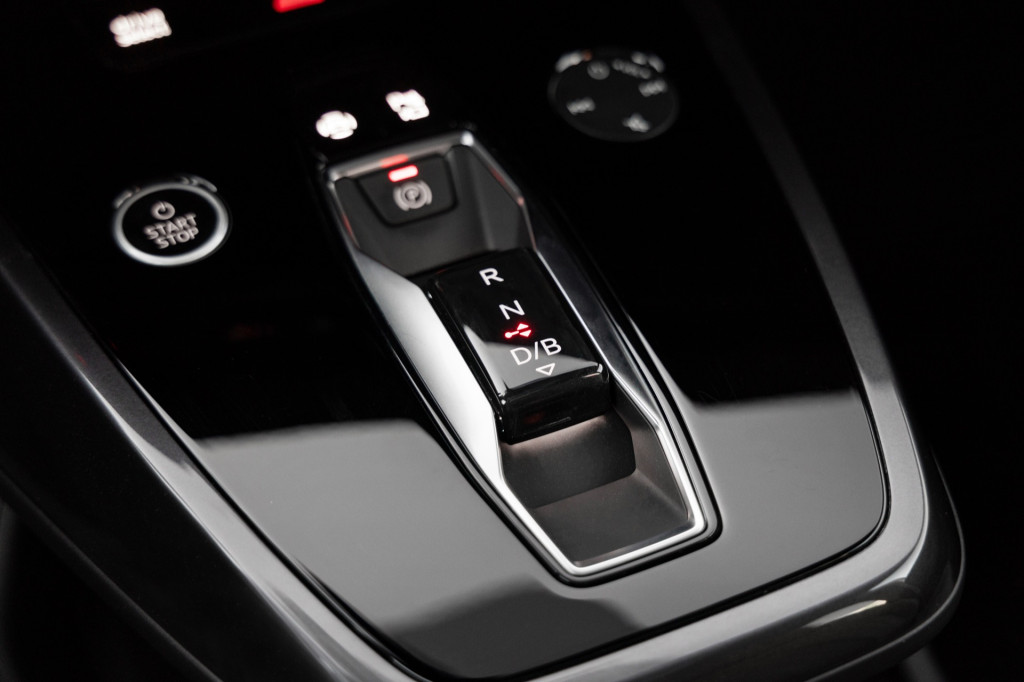 Drivers can choose among five “Drive Select” modes: Efficiency, Comfort, Auto, Dynamic, and Individual. We didn’t find the Dynamic mode as punchy and swift as we’d hoped, though the Efficiency mode clearly affected acceleration and made the Q4 slower and less responsive. In the end, we opted to do most of our test driving in Auto.

Audi executives uniformly said that while the Q4 may be a battery-electric car, its customers expect a similar driving experience and controls that mimic those of a gasoline or diesel car. Drivers who leave the Q4 in the standard “D” drive setting can use left and right paddles to increase or decrease regeneration through three settings, with 0 being the default and 3 the strongest. The “B” mode effectively locks the car in the highest 3 setting, somewhat boosting regeneration down to about 3 mph.

One-pedal: ‘not our philosophy’

But there’s no one-pedal driving mode and—like its VW Group sibling Porsche—Audi has no intention of providing one.

“That’s not our philosophy,” said Anthony Garbis, Audi’s senior manager of product planning, who pushed back against the idea that one-pedal driving was a benefit, suggesting it ran the risk of making passengers nauseous when used by an inexperienced driver. (There’s also no front trunk.) 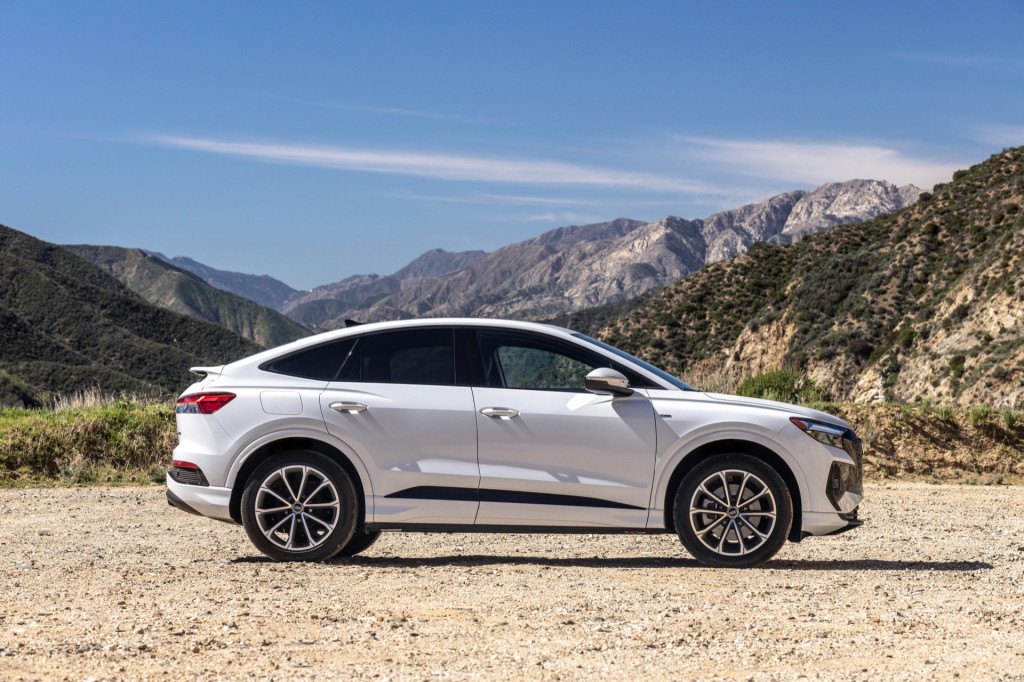 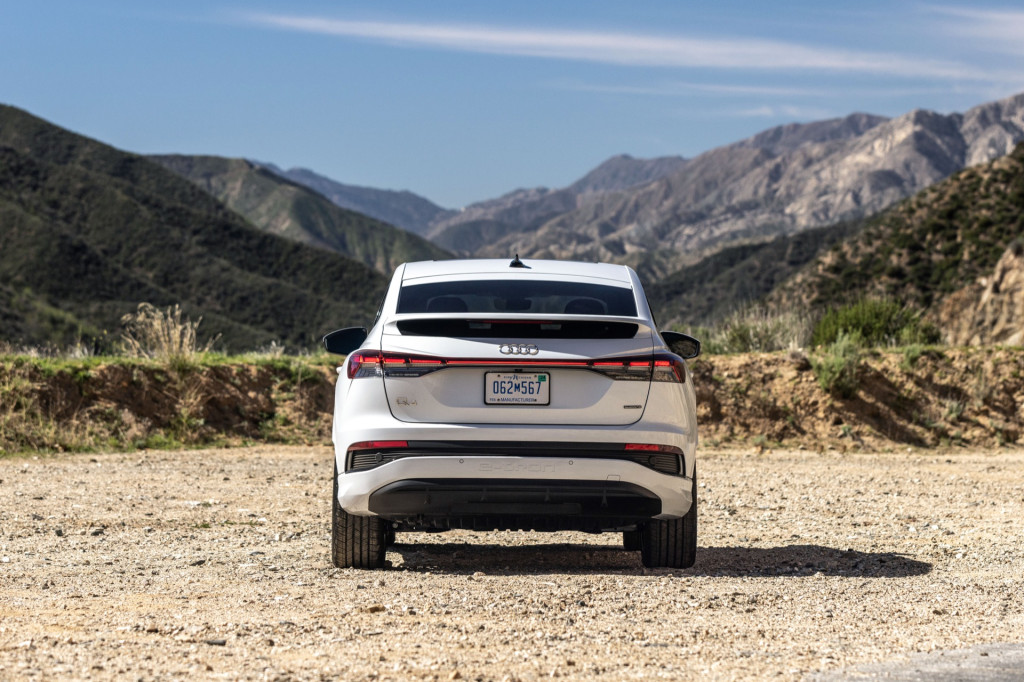 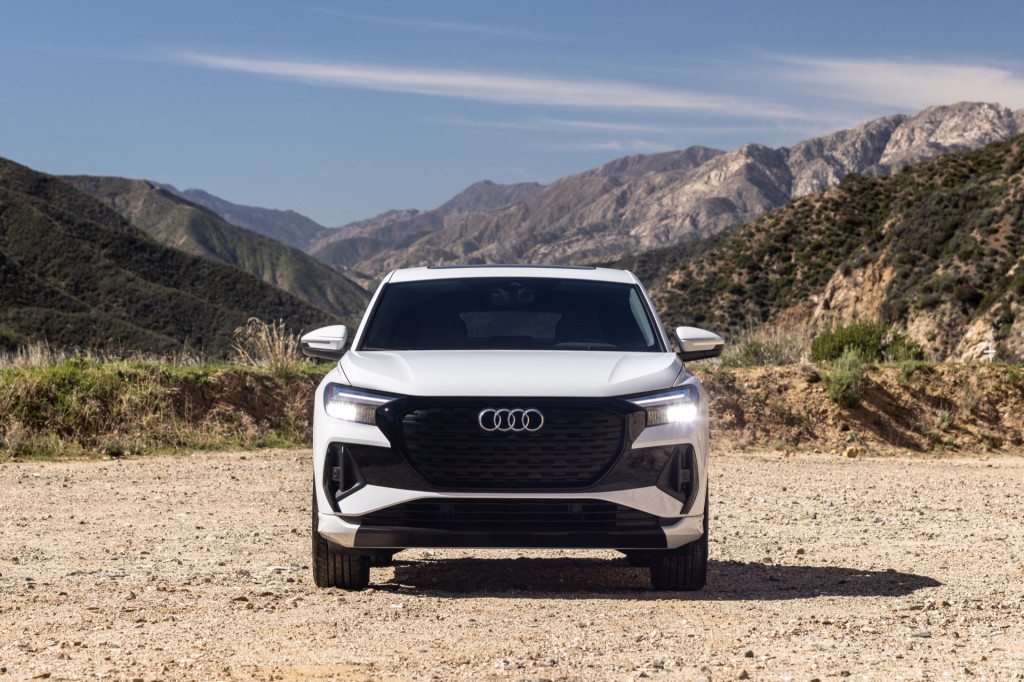 On the road, we found the steering predictable, with ratios that varied from the center to the most extreme turns, and power assist that varied with speed (more at low speeds for parking, less at highway speeds to keep the car stable). Handling and roadholding were adequate but seemed slightly numb, perhaps reflecting that with curb weights of 4,650 to 4,900 pounds, no Q4 is particularly light. The turning circle of 37.7 feet (AWD) is about average for a compact crossover.

Even given its hefty 82-kwh battery, the performance of our Q4 Sportback 50 E-Tron test car was adequate but hardly blazing. Asked about the possibility of a punchier Q4, Garbis smiled and said, “There’s always room for more power.” We look forward to future higher-performance models, perhaps a Q4 E-Tron RS?

Visually and dimensionally, the Q4 E-Trons are compact crossovers. But taking advantage of the EV skateboard architecture, with the wheels pushed out to the corners of the car and very short overhangs, the cabin offers a surprising amount of room. Audi said the distance from the pedals to the rear seat back is almost as large as that of the much larger Q7 SUV. 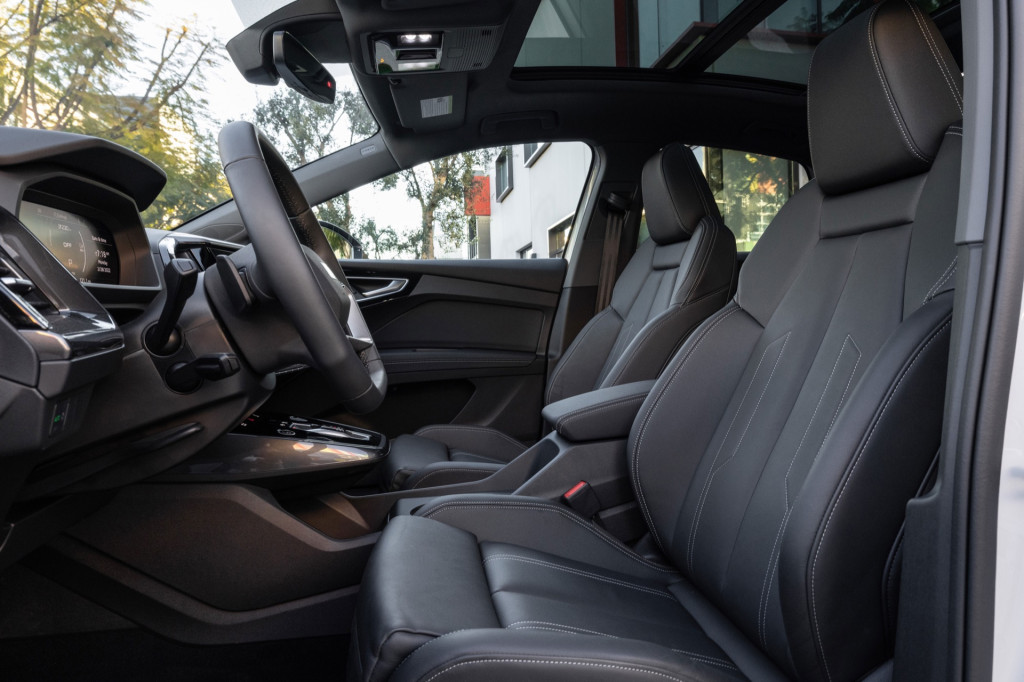 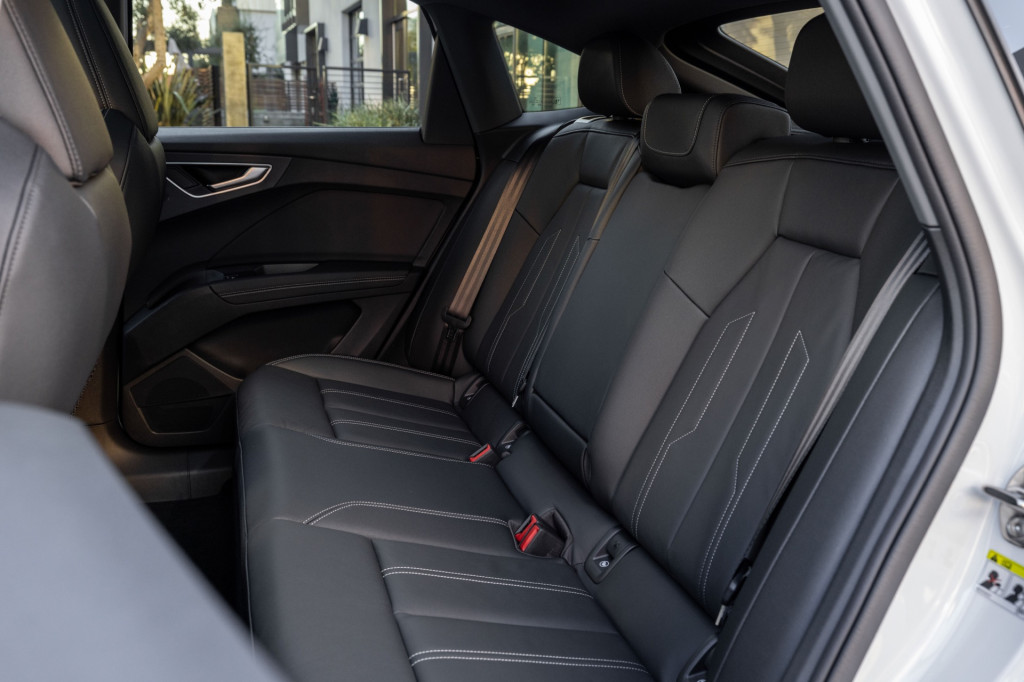 Indeed, two 6-foot reporters were able to sit behind each other, and drivers who pull their seats forward create a remarkably large opening for rear passengers. While it’s a five-passenger vehicle, we’d note that most passengers who ride in the center of the 40-20-40 split rear seat will be rubbing shoulders with their seatmates.

For drivers and front passengers, the haptic switches and overall layout takes a bit of learning. It all works fine once you understand the different functions, but more than once we changed something we didn’t intend to by accidentally brushing a surface.

The ride is smooth and Audi has done a remarkable job of quieting the cabin, even for an EV. Tire noise from the 19- or 20-inch wheels is thankfully low, and whine from the motors or power electronics is largely suppressed. At speed, the loudest noise was wind whistling over the door mirrors. 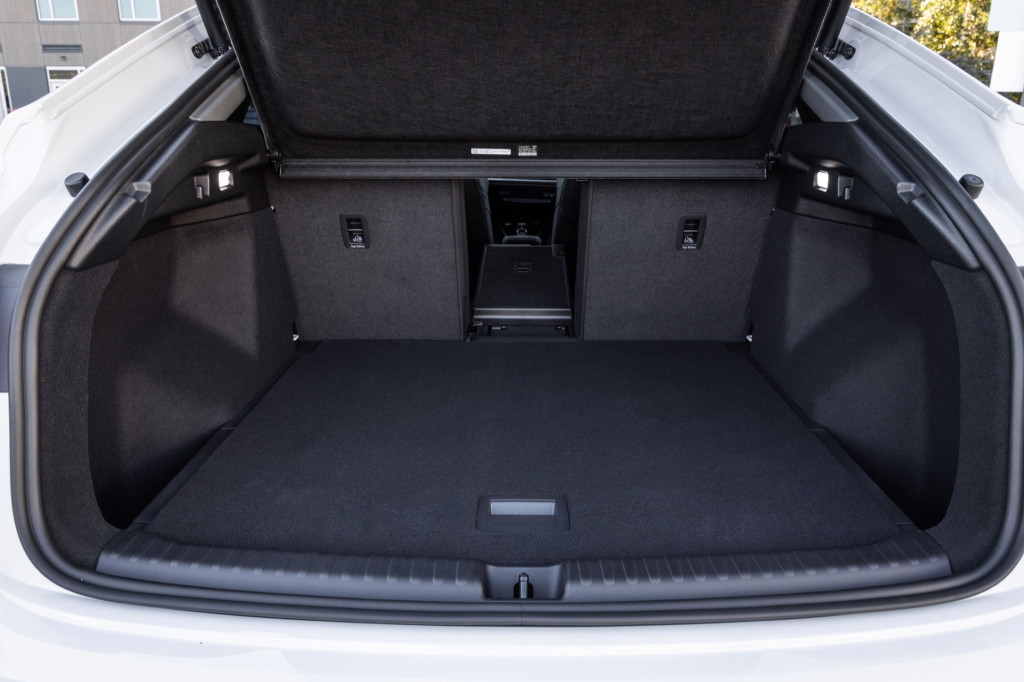 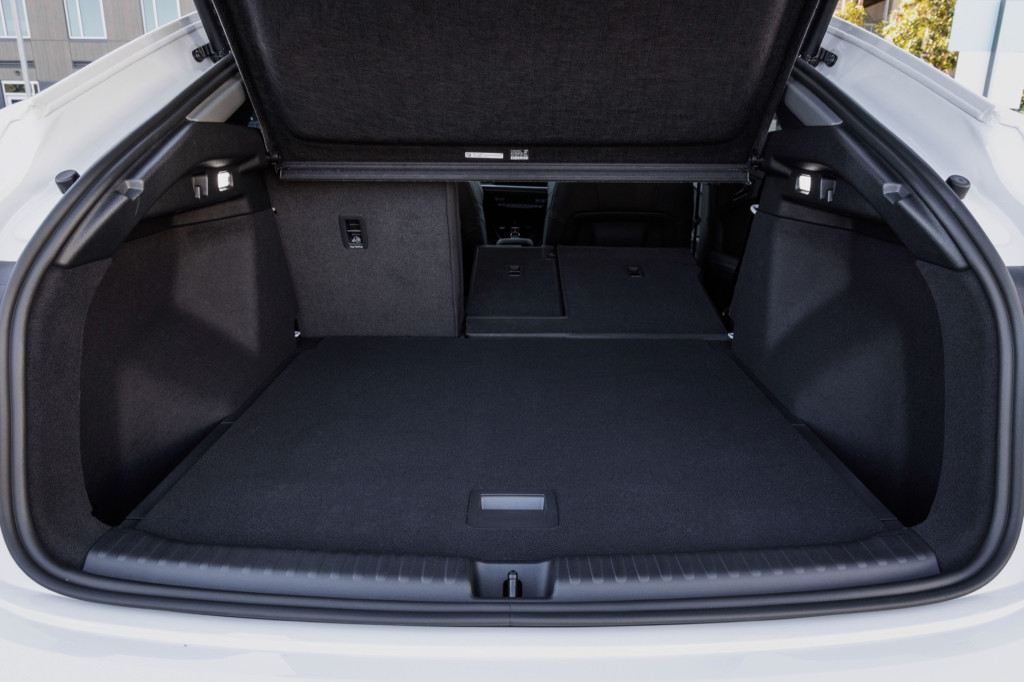 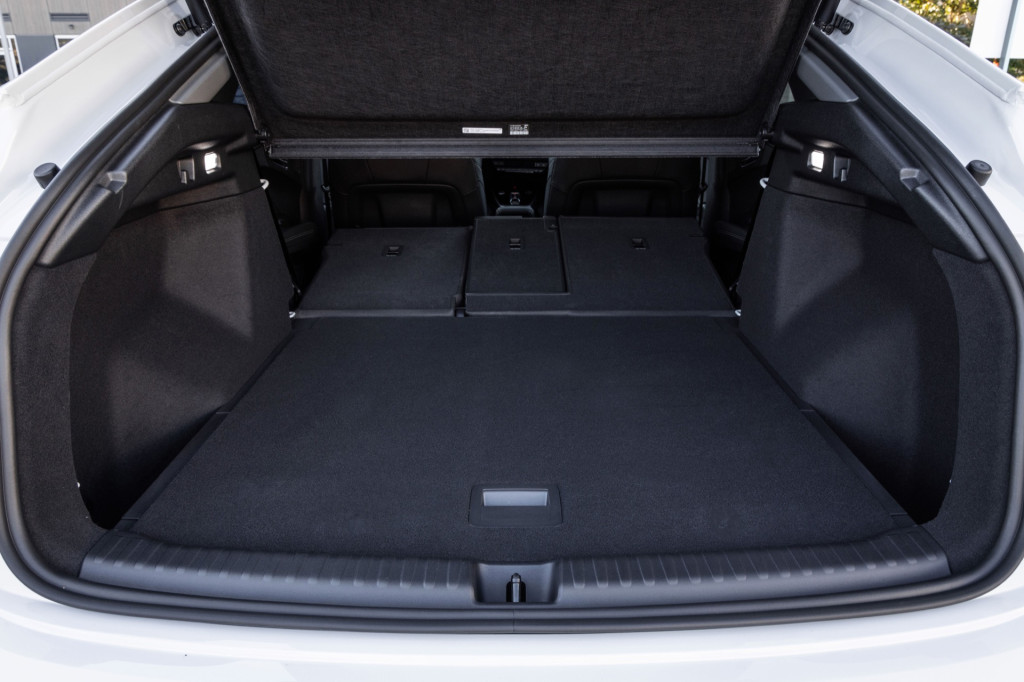 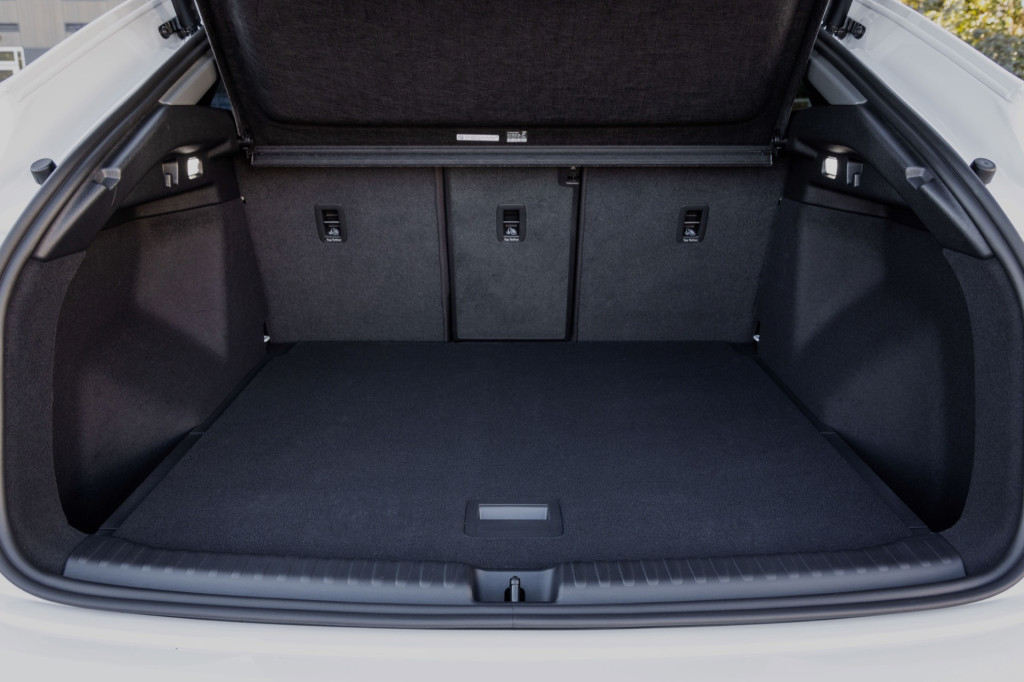 Cargo volumes with the rear seat up are 24.8 cubic feet for the Q4 E-Tron and 26.1 cu ft for the Q4 Sportback. With the rear seat folded, the SUV comes in at 53.1 cu ft vs 54.4 for the Sportback. While it’s counterintuitive that the Sportback, with its steeply raked tailgate, would offer more cargo space, Garbis explained that the tailgate of the Sportback is bowed out slightly at the rear, and its inner molding is hollowed out. Under EPA test standards, cargo isn’t stacked to the roof, so that sloping roofline doesn’t matter. But, he added, if you need to carry a large, square appliance box, get the standard Q4 E-Tron rather than the Sportback.

It’s also worth noting the load bay floor can sit at two different levels, or be folded in half and slotted at an angle to provide a barrier that divides the load bay—and potentially keeps your groceries or other goods from sliding all over the full cargo compartment.

Array of models and options

While the Q4 E-Tron standard SUV can be ordered with the 40 (rear-wheel drive) or 50 (AWD) powertrains, the Q4 Sportback E-Tron is only offered in all-wheel-drive form. Including the mandatory delivery fee of $1,195, those three models start at roughly $50,000, $55,000, and $58,000 respectively. The base trim level is called Premium, and a panoramic sunroof and power tailgate are included on it. 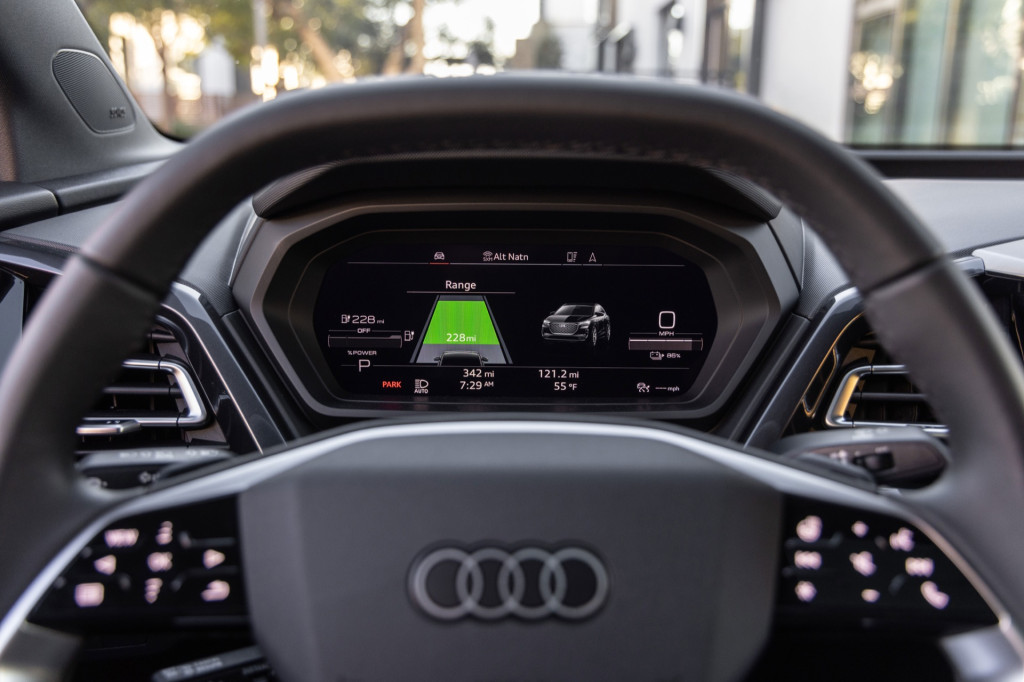 Neither the National Highway Traffic Safety Administration (NHTSA) nor the Insurance Institute for Highway Safety (IIHS) has rated the Q4 E-Trons for safety as yet. But Audi said it expects the Q4 to earn a 5-star rating from NHTSA and be designated a Top Safety Pick by IIHS.

With EPA efficiency ratings of 97 to 112 MPGe, the Q4 E-Tron lineup is only average in using its energy parsimoniously. Testing the drive modes through a mix of climbing and descending, plus suburban traffic among malls and gated communities, we logged 2.9 miles per kwh over our 90 miles of driving. 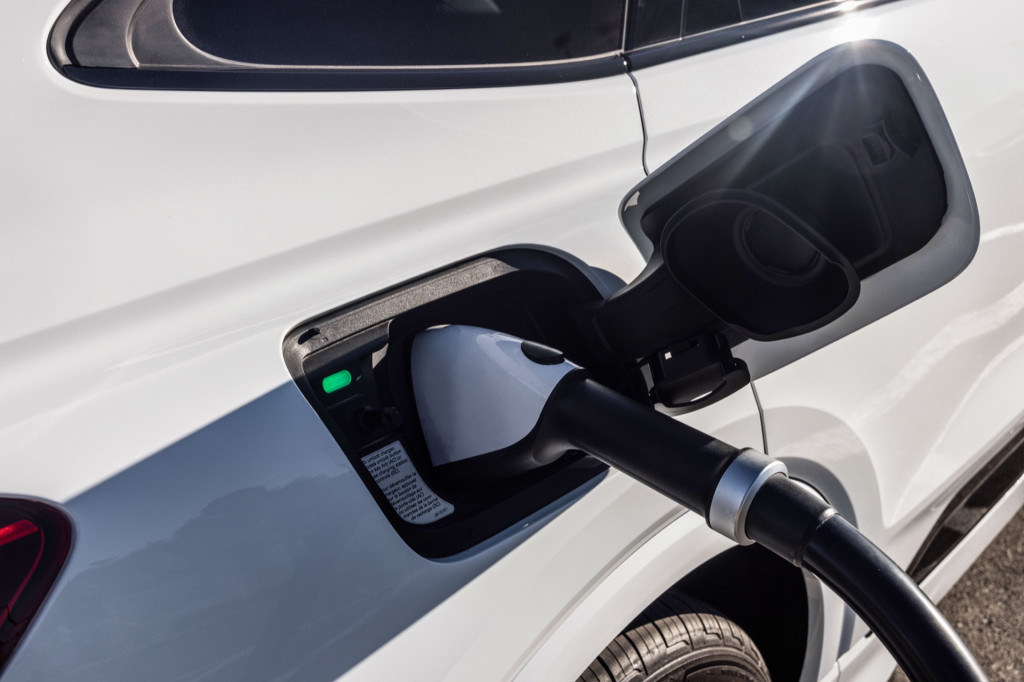 A portable charging cord with swappable pigtails for 120-volt and 240-volt plugs is provided with every car, and can charge at up to 9.6 kilowatts on the higher power. Audi offers a garage wallbox charging station capable of charging at up to 11.5 kw. Under optimal circumstances, the 150-kw CCS fast-charging system can recharge the battery from 5% to 80% capacity in as little as 36 minutes.

Every Q4 E-Tron buyer receives 250 kwh of free charging at Electrify America DC fast-charging sites across the United States. Audi is also working with QMerit to provide customers with assessments of what it may take to install a charging station at their particular residence.

Although the related VW ID.4 is made for the U.S. in Chattanooga, Tennessee, the Q4 is only made in Zwickau, Germany—which likely means that in 2023 it will continue to be ineligible for the $7,500 EV tax credit.

NOTE: While our test car was a 2022 model, the specifications, ratings, and prices in this review apply to 2023 models of the Audi Q4 E-Tron lineup. There are no mechanical differences between the two years, and only a small number of equipment changes—which have been reflected in the descriptions above.