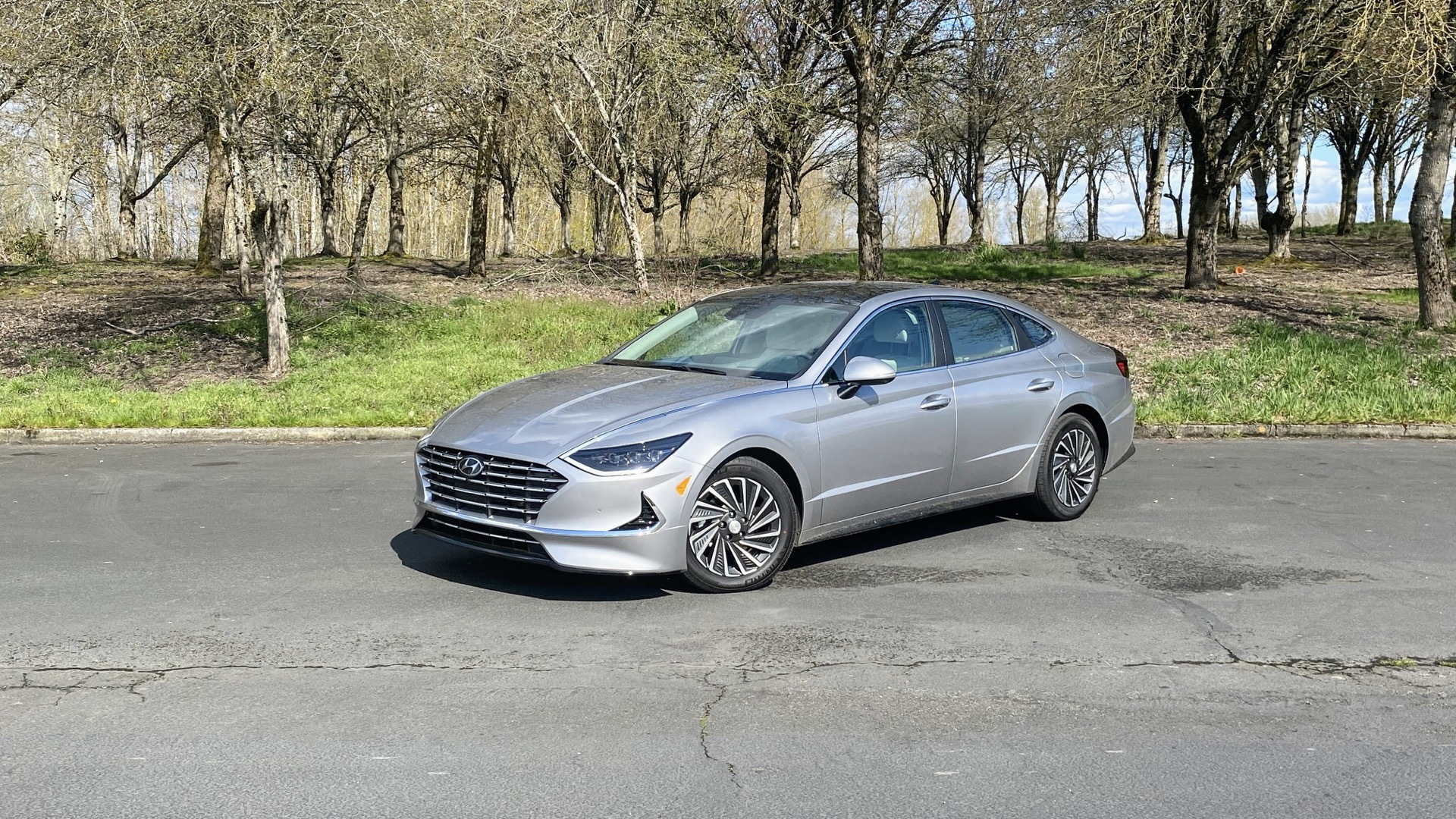 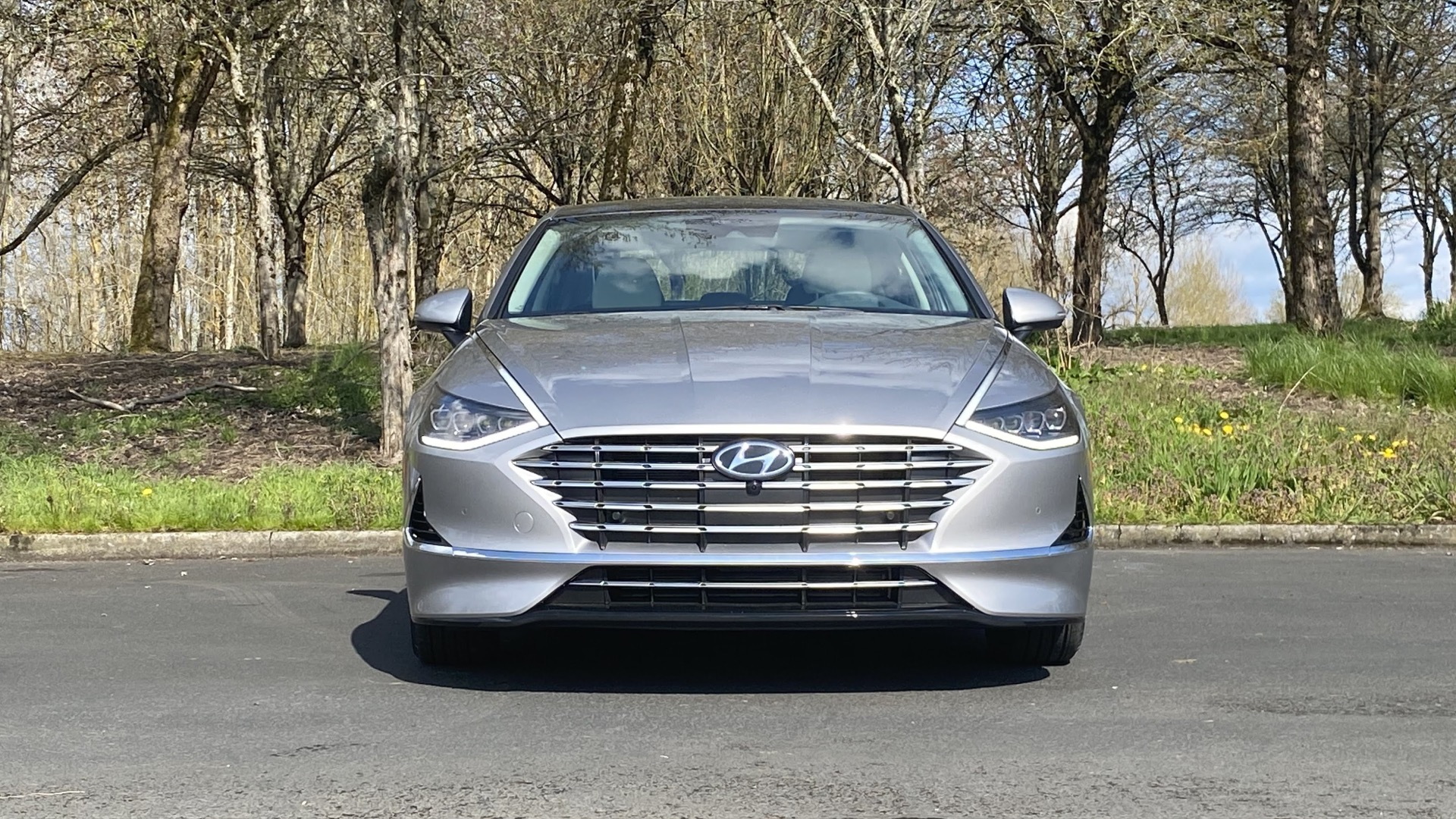 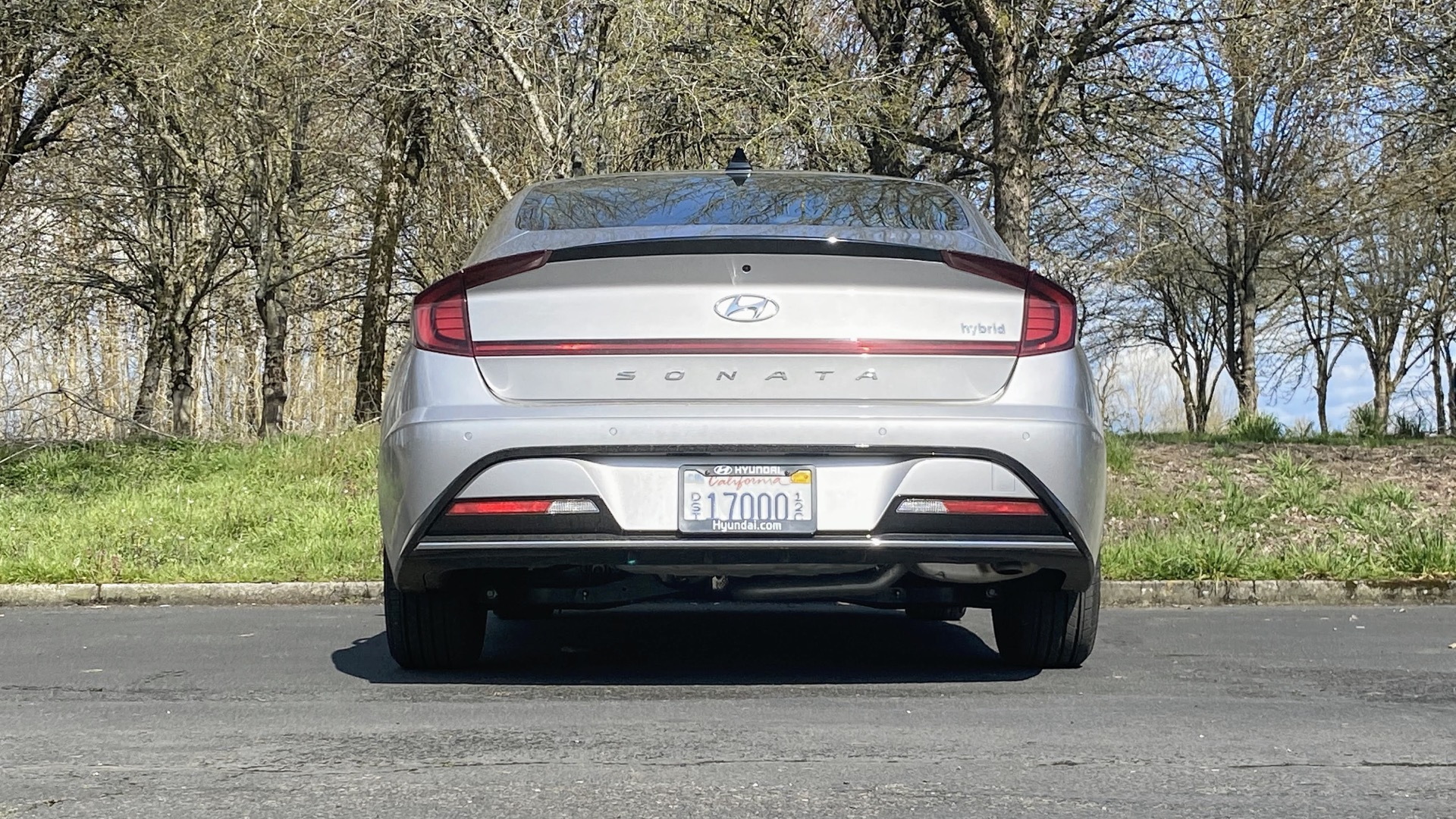 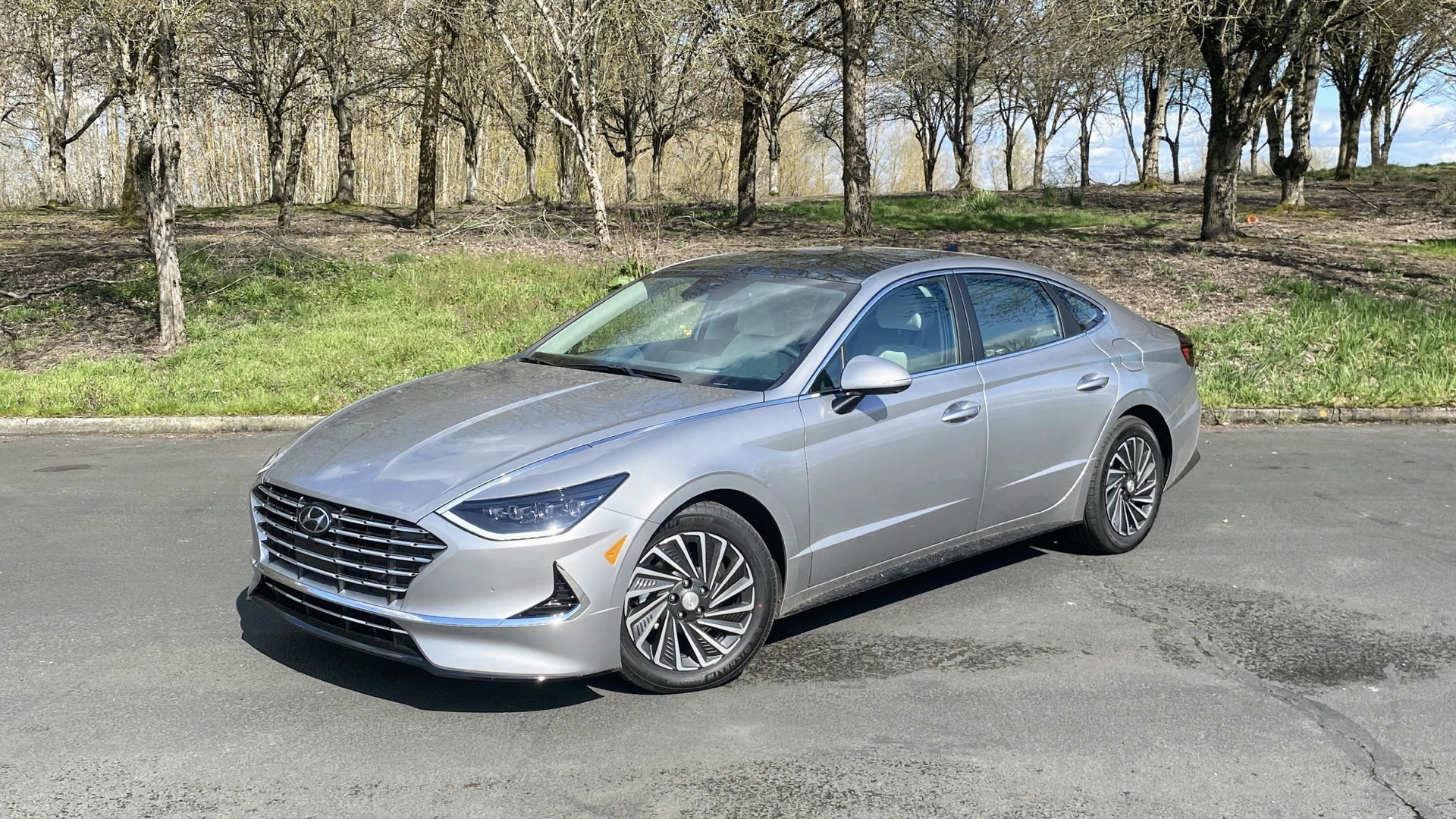 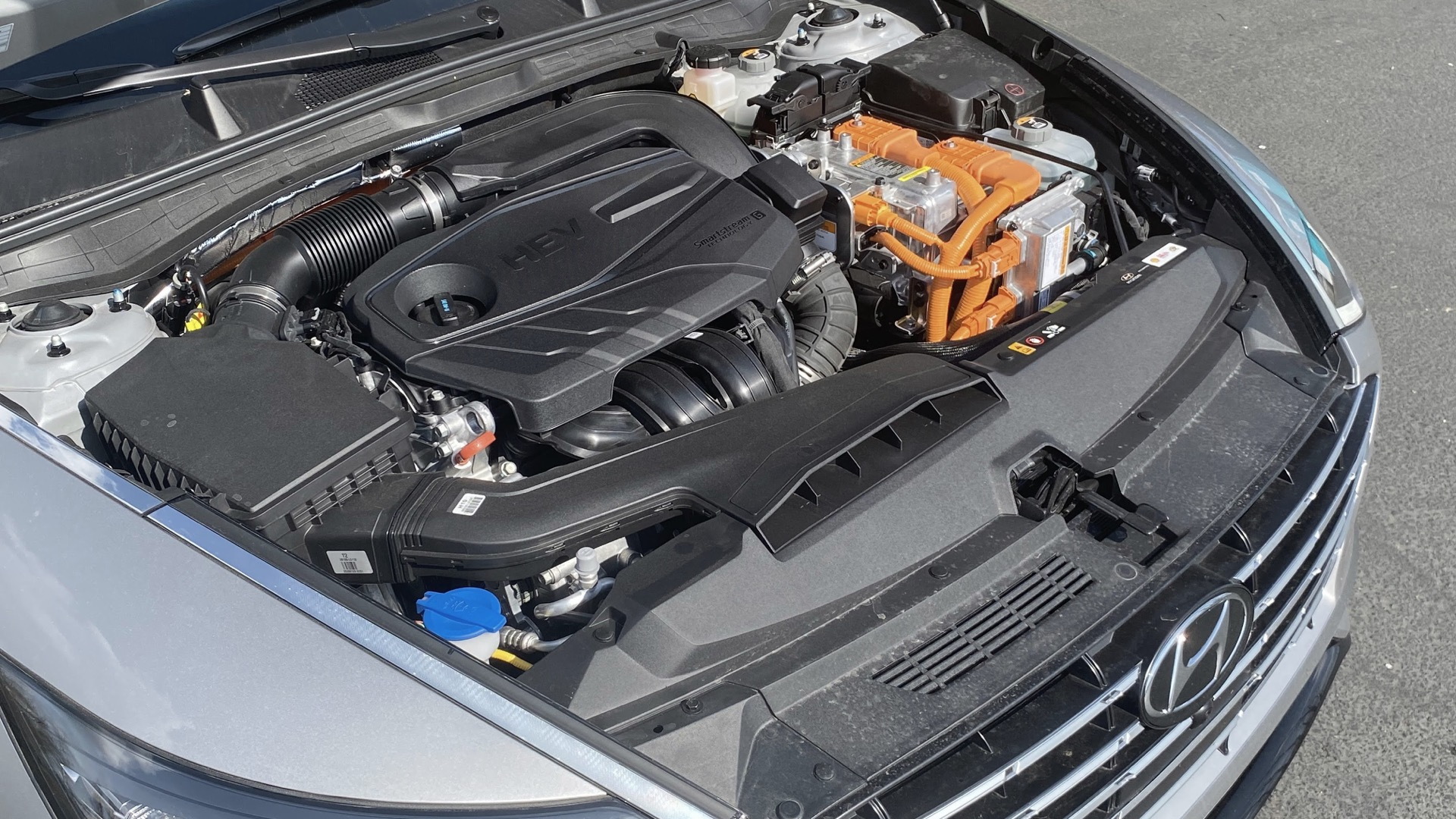 The 2020 Hyundai Sonata Hybrid is one of the highest-mileage family-size sedans ever, and it’s arriving soon—at a time of sustained record-low gas prices and a global oil glut.

Keeping that unfortunate timing in mind only underscored that there’s so much more to this model’s appeal. Over four days spent with the Sonata Hybrid earlier this month, I found it to be a roomy, plush-riding, and feature-packed sedan, with dramatically improved drivability over previous hybrids from Hyundai.

For the first time, it might even be the best-driving version of the new Sonata—one that also serves as a high-mpg bulwark for when fuel prices soar again. And they will.

Even if people don’t care about the mileage numbers alone, Hyundai has packed the Sonata Hybrid with some geeky goodies. The most noteworthy of those is the Solar Roof System, which takes up the cabin roof and generates enough energy for what Hyundai estimates as 700 “free” electric-running miles—boosting mpg—per year. You can read more about it and our takeaway on the tech.

The roof itself is a conversation piece, as it looks great with the solar cells visible up close, and in combination with the “dynamic lasso” front lights. Another unexpected bonus is that it weighs less than a panoramic roof—helping keep curb weight down slightly compared to the previous Sonata Hybrid

The best hybrid for the American exurb commute?

In this time of sheltering in place, my miles were weighted far more toward highway miles than they might have been otherwise—which served to underscore a strength. Every hybrid juggles power sources in a particular way and plays a guessing game about when to release its stored energy. And as I studied my trip-computer returns over several days, noting its high numbers in varied, gentle driving in the 35-to-65-mph range, it became apparent that the Sonata Hybrid might be the best of any of the current hybrids for American-style commuting.

To go touchless with the outside world, I packed a lunch to go, and decided to come up with a few baseline measurements. One of them: a 102-mile loop, from Portland to Hood River and back—an essentially level but gently rolling (and often windy) stretch of I-84 that we took at 70 mph in one direction and 65 mph in the other. The Sonata Hybrid averaged 47 mpg.

Over a different 53-mile there-and-back trip (Portland to Sandy and back) that included a few miles of city streets, plus a near-equal mix of slower freeways, suburban boulevards, and rolling country backroads—taking us from about 300 feet up to 1,000 feet and back—I averaged more than 56 mpg (starting and stopping around the same battery level) according to the trip computer.

While that largely confirmed what I suspected about U.S. commuting, the Sonata Hybrid actually doesn’t seem to be as good as some of its peers at what I call “the low-hanging fruit” of hybrid basics. Driving it in a few short-distance loops of gentle, low-speed urban stop-and-start conditions, where it’s up to the system to simply recover energy, boost on acceleration, and use electricity to cruise between lights, the trip computer would invariably settle to the 36-38 mpg range. That’s still good for such a big car, but it confirms why the city rating is still quite a bit lower and it’s not segment-leading (the Accord Hybrid or Camry Hybrid will do better).

Better-performing in the details

At face value, the specs sheet for the 2020 Sonata Hybrid appears almost unchanged, even though this is a completely new car—a version of the eighth-generation Sonata that was introduced late last year. A 6-speed automatic transmission remains fitted with a 51-hp permanent magnet synchronous motor, with a 2.0-liter inline-4 engine, making 150 horsepower and 139 pound-feet of torque, that can be clutched into or out of the power mix. The lithium-ion battery capacity also remains the same at 1.62 kwh, and the system output of 192 combined horsepower—just 1 hp less than last year.

It’s essentially the same configuration Hyundai has used going back to its first Sonata Hybrid, in 2011 (and in the Sonata Plug-In Hybrid, which isn’t returning). While using a single motor for so many tasks, without a torque converter, was a bronco-bucking disaster in the early stages, Hyundai has refined the software and controls to the point where you really don’t notice the engine coming into the mix sometimes—or even upshifts. It pulls off almost-floored downshifts without befuddlement, too, and feels perky and refined nearly all the time.

That’s enabled through a new Active Shift Control technology that focuses much more closely on the rotational speeds of the engine and transmission, and shortens the length of the actual shift by 40 milliseconds or more while also making it feel smoother and more precise. Aided by a reworked clutch to bring the engine in and out of the mix, it also boosts acceleration and fuel economy and the durability of the transmission.

The Sonata Hybrid starts up in Eco mode, which feels less sluggish than the comparable modes in other hybrids. A toggle in the center console lets you choose from three other modes: Custom, for softer transmission responses; Sport, for more aggressive accelerator tip-in and quicker shifts; and Smart, which studies up on driver behavior from the accelerator, steering wheel, slope, and following distance over the long term (past hour) and short term (past 160 milliseconds), and dials in the right mode automatically.

Quirks from the layout

There are a couple of niggles in the driving experience. Moving quickly on a tight, twisty backroad, the Sonata Hybrid sometimes exhibits a long, frustrating power-delivery delay if I’d just had my foot on the brake. It served as a reminder of the limitations of a single-motor hybrid layout—although Sport mode shortened those responses and kept the engine running to load up the battery nearly full.

Also, the steering-wheel paddles order up noisy downshifts from the engine, but it’s accompanied by zero additional regenerative braking.

The only way to ration out more engine braking is with the brake pedal, and otherwise its coordination and blending of the friction brakes is excellent in the last few feet leading up to a stop.

One thing that’s come a long, long way in the past couple generations of the Sonata is steering—and handling in general. The steering has a lighter weighting and centers more easily; it now feels natural both in tight corners and steering around parking lots.

The hybrid battery has been moved to allow a lower, flatter cargo floor. It’s now ahead of the fuel tank, just under the rear seat cushion, and it gets rid of the 12-volt lead-acid accessory battery by using a clever new auxiliary 12-volt battery “partition.”

Hyundai has pulled out all the stops in the Sonata Hybrid with efficiency aids. It gets active air flaps in front—with more of an aerodynamic effect versus the previous model—plus a rear lip spoiler and full underbody covering, including a new engine bay undercover.

The efficiency displays offered in the Sonata Hybrid are refreshingly simple. Good riddance to the system in the outgoing car that judges your driving with percentages for economical, normal, and aggressive.

We drove the base Sonata Limited, which came with EPA numbers of 45 mpg city, 51 highway, 47 combined. The base Blue model is the one to earn the top 50/54/52 mpg rating. That’s mostly due to a significant weight difference that puts them in different EPA test classes, and it’s not likely to reflect as much of a real-world difference.

A quiet, comfortable car with the smallest of appetites

Back seat space is a differentiator in this class, and at 6’-6” I found I was able to fit behind myself (with the front seats back nearly all the way), with just enough headroom. Front seats in the top-of-the-line Hybrid Limited I tested were very comfortable and supportive and included heating and cooling functions. The ride quality was on the soft side, with enough underlying firmness for handling control, and the Hybrid was very quiet inside—perhaps a product of the underbody aero work plus the Michelin Primacy all-season rubber.

I only noted a couple of interface issues: To click though audio channels you needed to reach all the way to a capacitive button on the right side of the very nice 10.3-inch infotainment screen—something that required panning my eyes over there every time. And when the sun was ahead, at an angle, the chrome bar at the top of the dash created an almost ever-present (distracting) reflection on the inside of the windshield.

Pricing hasn’t yet been released for the 2020 Sonata Hybrid, but look for a start at about $27,000 on the mpg-topping base Blue model. The Limited, which likely costs about $34,000 as tested, adds blind-spot monitors and parking-distance sensors, plus LED headlamps, wireless smartphone charging, Hyundai’s digital key system, and a heated steering wheel.

Review impressions are from a pre-production car that Hyundai had delivered to the author.