Automakers face some daunting challenges in selling electric vehicles to urban apartment-dwellers, who are often without a home charging point.

As a partial response, Volkswagen has shown a portable DC fast charging unit aimed at urban environments or temporary use at events or in parking lots—and it could be a very useful part of a strategy to help provide enough backup options for making electric-car ownership in big cities work.

The station is built around the principle of a power bank, which most people are familiar with, as a way of getting a little more charge on the go when our phones won’t make it through the day.

The chargers could be moved to a service location, where they would run entirely from onboard batteries. They could either be swapped out for another one when they reach 20 percent of their capacity, or be plugged in at a maximum power of 30 kilowatts, to charge themselves at a slower, steadier rate that could help reduce the strain of peak electrical-demand periods—and if used in the U.S., the chances of costly demand charges.

The unit has a capacity of up to 360 kilowatt-hours, which is said to be enough for up to 15 (shorter-range) vehicles. It uses the battery pack engineered for VW’s upcoming MEB-platform vehicles and can charge them at up to 100 kw—the same rate confirmed for the first MEB vehicles—and can fast-charge two vehicles simultaneously (each likely at a lower rate) while also charging two vehicles on AC, for a total of four vehicles.

Volkswagen calls its mobile station "the first 'power bank' for the e-car," although there are already several companies working on such a product. The leading one is California-based FreeWire, which attracted a $5 million investment from BP earlier in the year, and more recently, an investment by Volvo.

VW plans to put the first of its mobile power banks into use in the first half of 2019 in the automaker’s hometown, Wolfsburg, and will implement it elsewhere starting in 2020—as VW’s new generation of electric vehicles should be rolling out to Europe in greater numbers. 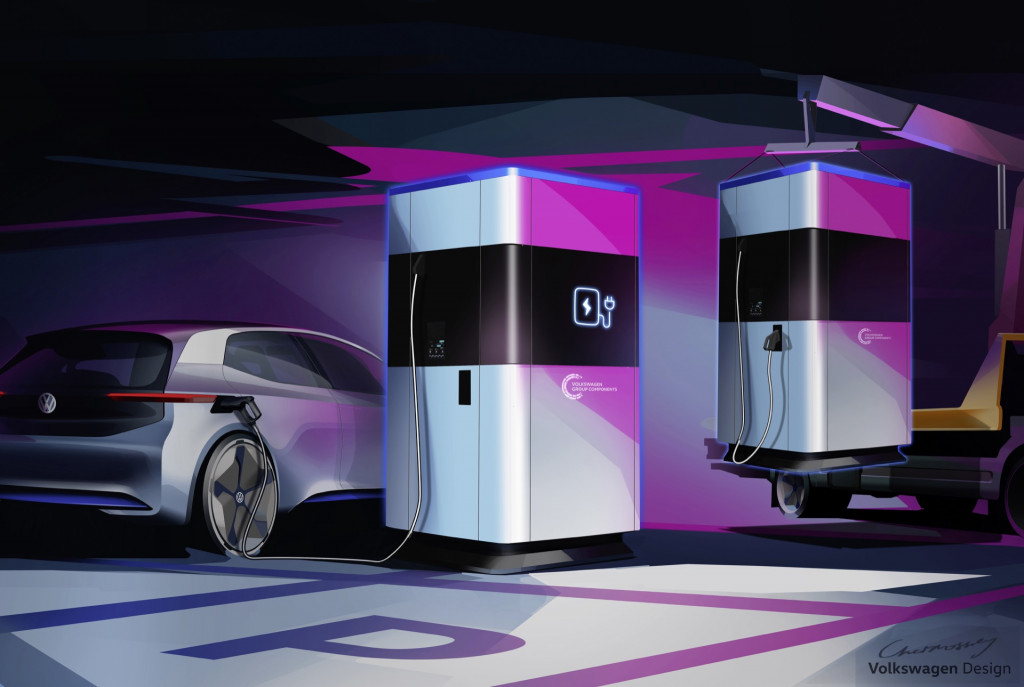 VW notes that these stations could also be used as smaller-scale buffers for storing solar or wind energy from nearby sources. However, the more critical question might relate to how VW plans to transport these units, which each must weigh thousands of pounds. Let’s hope VW is readying a very cute electric-Microbus trailer.