Media days at the huge and influential Geneva show are March 6 and March 7, and this year it looks like the show will offer a lot of news for plug-in electric car fans.

They'll be supplemented by technology presentations from other makers eager to demonstrate they're not being left behind in planning for vastly expanded ranges of fully and partly electrified models in 2020 and beyond. 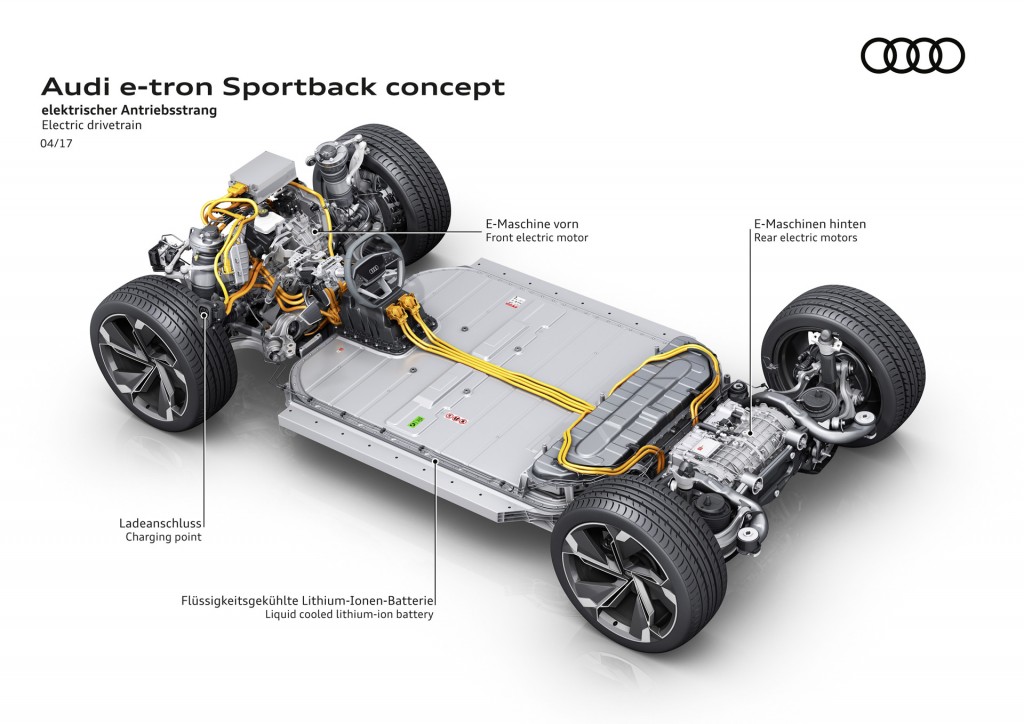 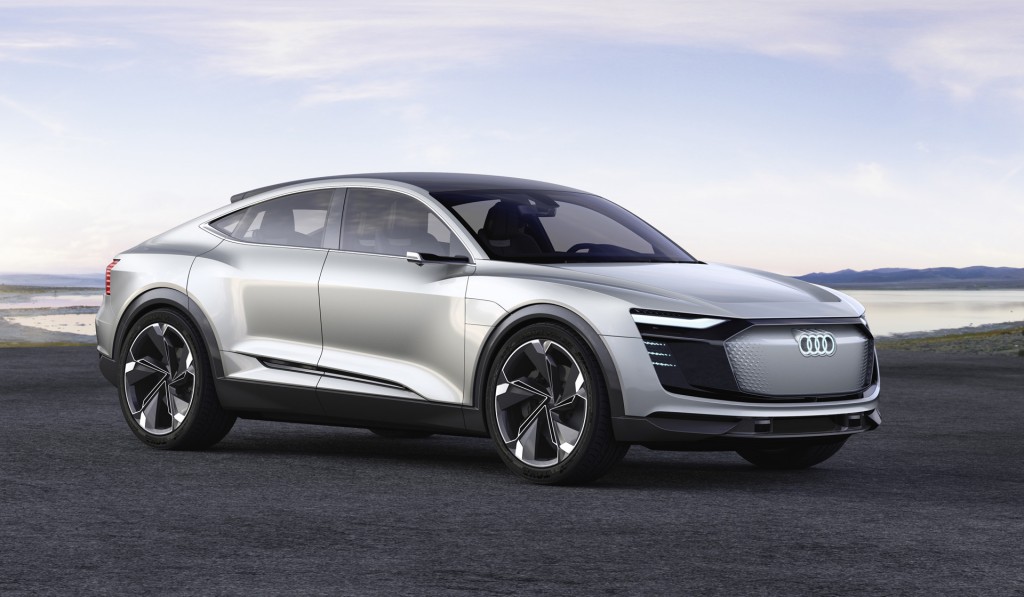 Audi was among the first luxury makes to announce an all-electric vehicle, in this case a crossover utility vehicle, and the final production version will be launched in Geneva.

First revealed at the 2015 Los Angeles auto show in the wake of the Volkswagen diesel emission scandal, the e-tron is the first of a new generation of dedicated battery-electric electric vehicles to emerge from the giant VW Group.

Audi has since shown an "SUV coupe" version of the e-tron, and will also launch a compact vehicle based on the same MEB underpinnings as the Volkswagen ID hatchback that goes into production in November 2019.

The Audi e-tron will be the first vehicle, executives say, to be offered with 150-kilowatt DC fast charging (Tesla models currently top out at roughly 135 kw), though the Porsche Mission E electric sport sedan will offer 350 kw when it launches a year later.

It should go into production mid-year and first deliveries will take place this fall. 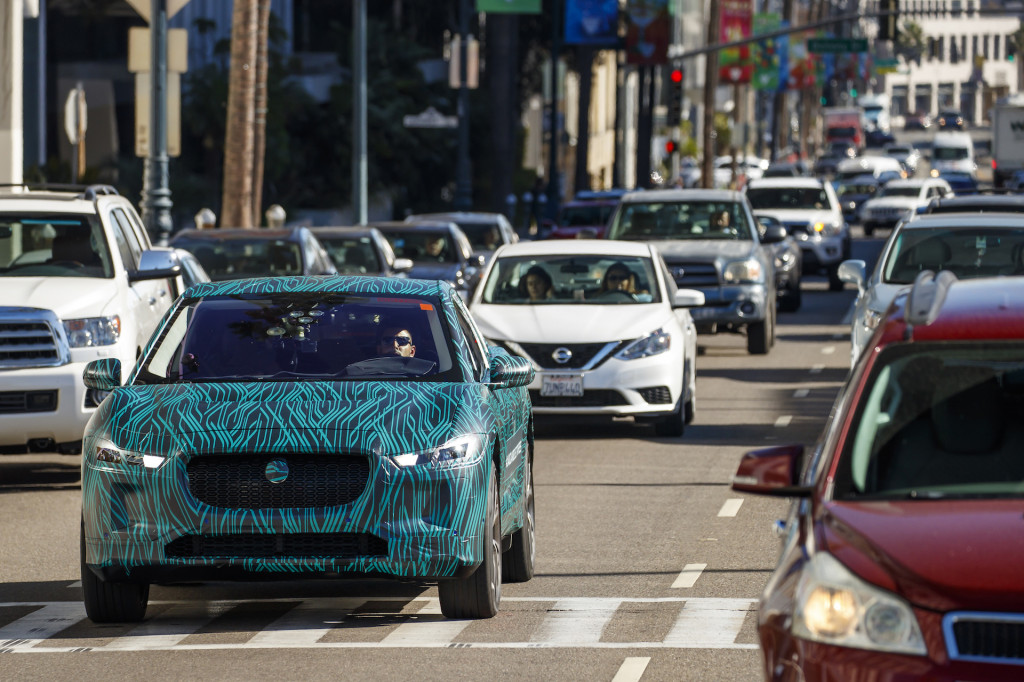 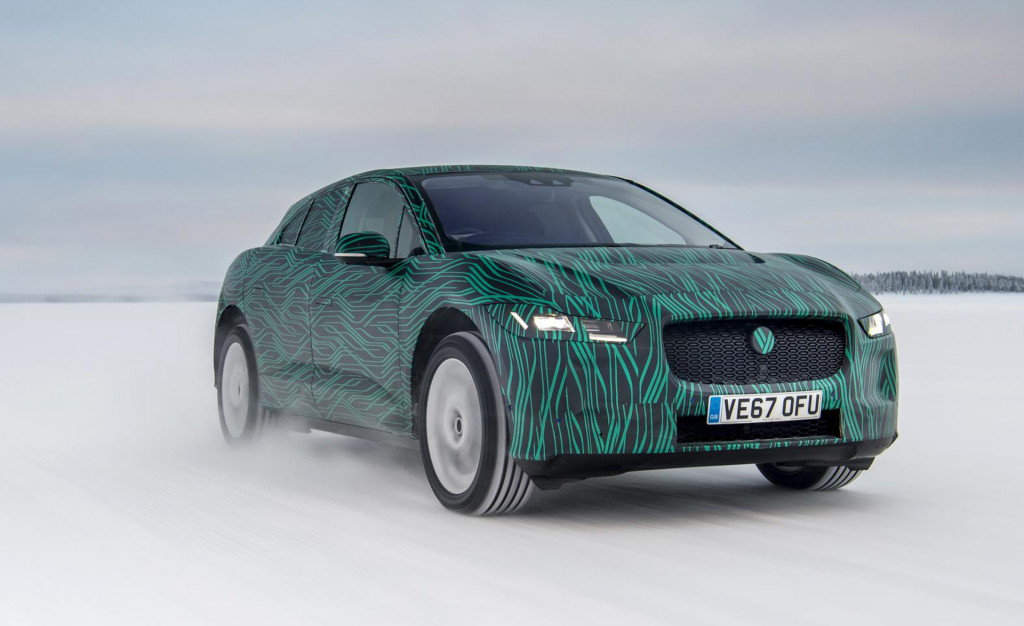 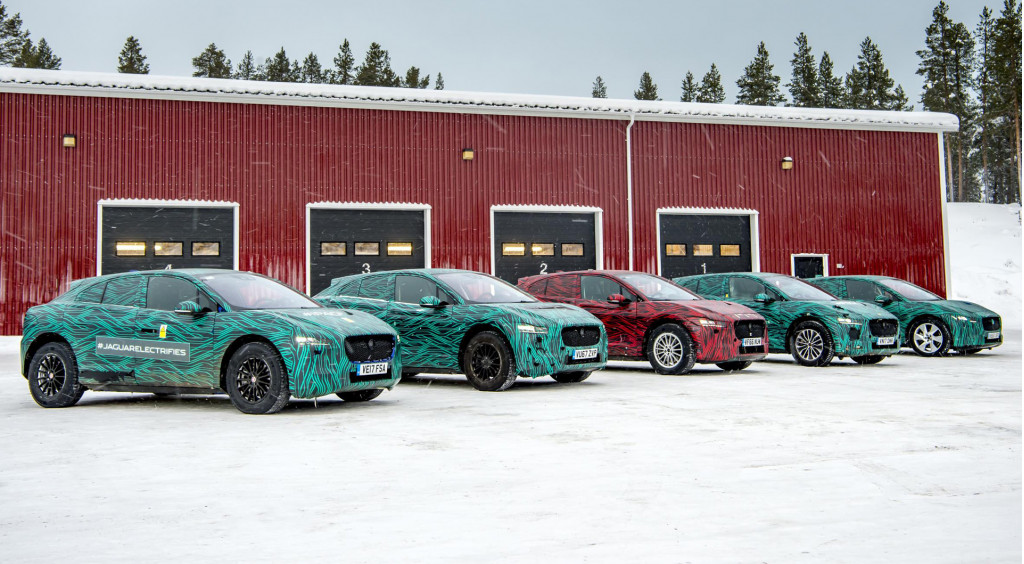 Jaguar unveiled a concept version of its 2019 I-Pace all-electric crossover only 18 months ago at the 2016 Los Angeles auto show, later than Audi and Mercedes-Benz did for their electric SUV concepts.

But it's leapt to the head of the queue now, with the production version making its debut at Geneva, pre-production vehicles caught in testing and video shoots for months now, and deliveries in Europe to start late this summer.

The production I-Pace isn't expected to differ significantly from the concept, as executives said at that LA Show launch.

The first-ever all-electric Jaguar has the footprint of a compact crossover, the company has said, but offer cabin volume closer to that of a mid-size SUV—though it won't have a third-row seat.

A 90-kilowatt-hour lithium-ion battery pack under the I-Pace cabin floor is expected to deliver a rated range of 220 miles or thereabouts.

The electric crossover is powered by a pair of electric motors, one per axle, that add up to a total of 300 kilowatts (400 horsepower) and 516 pound-feet of torque. Acceleration from 0 to 60 mph, Jaguar says, will be in the 4.0-second range. 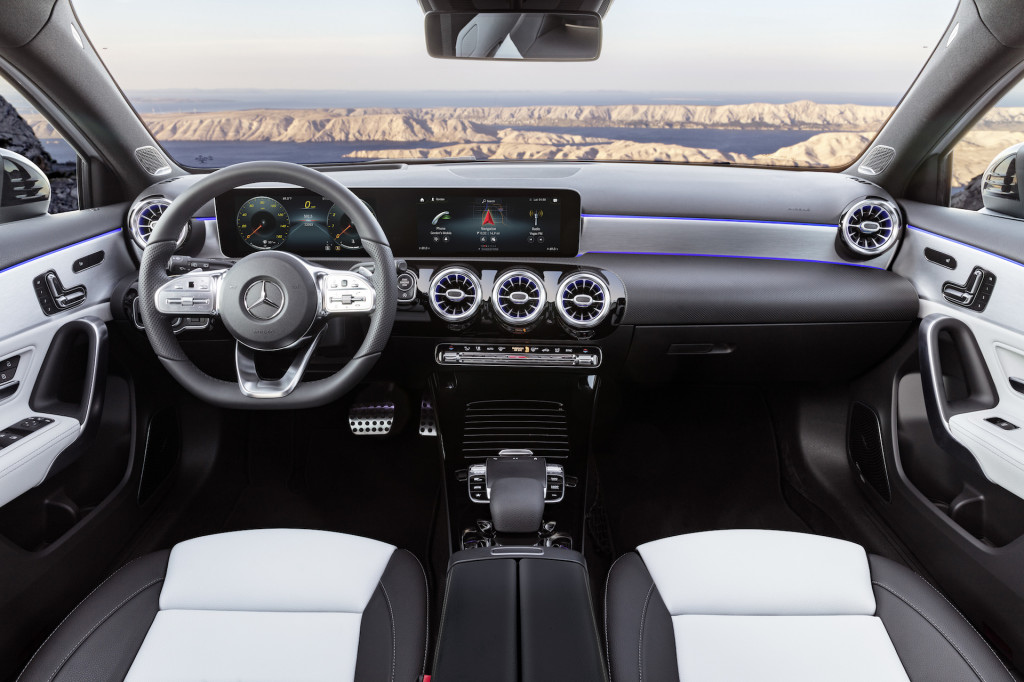 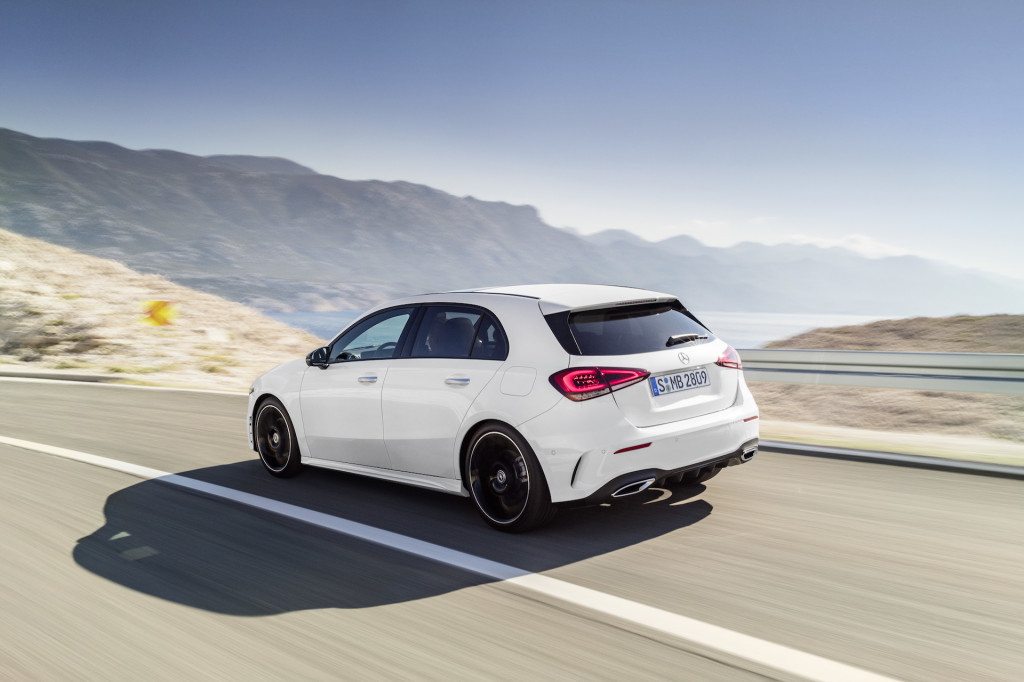 The small, coupe-like Mercedes-Benz CLA sedan uses underpinnings from the smallest Mercedes on the market, the A-Class hatchback sold in Europe since the 1990s.

Last week, the company  unveiled the latest A-Class generation, with a sleeker design, more fuel-efficient powertrains, and a much more upscale interior.

The new A-Class has a longer wheelbase, and more headroom, legroom, and shoulder room, plus greater cargo-bay storage. Its sports a more aggressive or "athletic" design.

Inside, drivers will see a lot of S-Class, notably in the digital dashboard displays and the new Mercedes-Benz User Experience, or MBUX.

European A-Class models will offer three engines. Two are gasoline—at 1.4 or 2.0 liters—plus a 1.5-liter turbodiesel. A slide snapped several months ago indicates there will be a future plug-in hybrid version.

The A-Class platform will also spawn the EQA battery-electric car shown as a concept in September at the Frankfurt auto show, expected to go on sale in 2020 or so.

That car used a 60-kilowatt-hour lithium-ion battery to power one electric motor on each axle, giving a combined 200-kilowatt (270-horsepower) power rating and 368 pound-feet of torque. 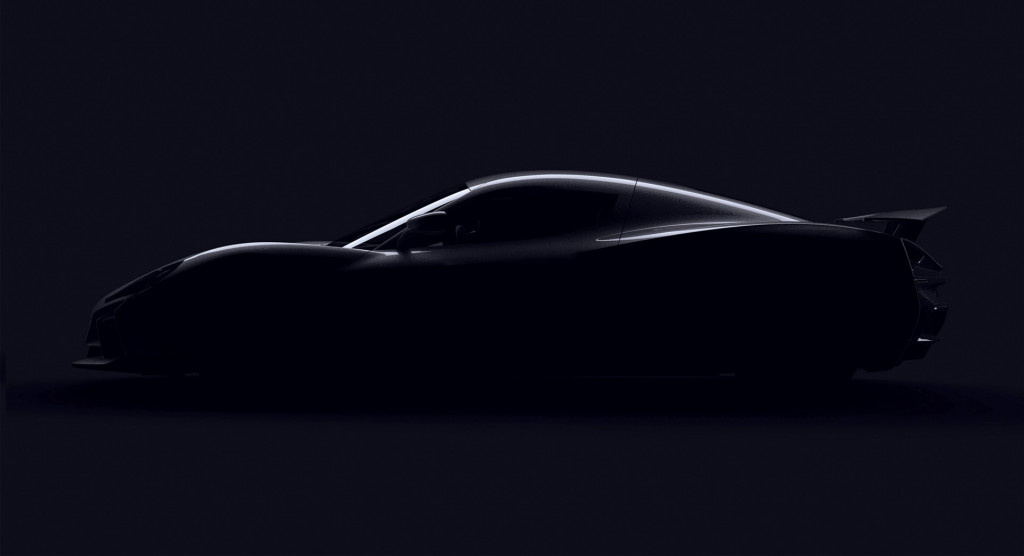 Rimac first appeared at the 2011 Frankfurt auto show with its Concept_One electric supercar, a novel idea from an unknown company in Croatia.

As of March 2016, car is now in production, sort of—though limited to 10 units—with a powertrain consisting of four electric motors whose total output is 810 kilowatts (1090 horsepower).

At Geneva, Rimac will launch a successor that it plans to build in higher volumes, and it has released a video teasing that car. Expect more details to follow. 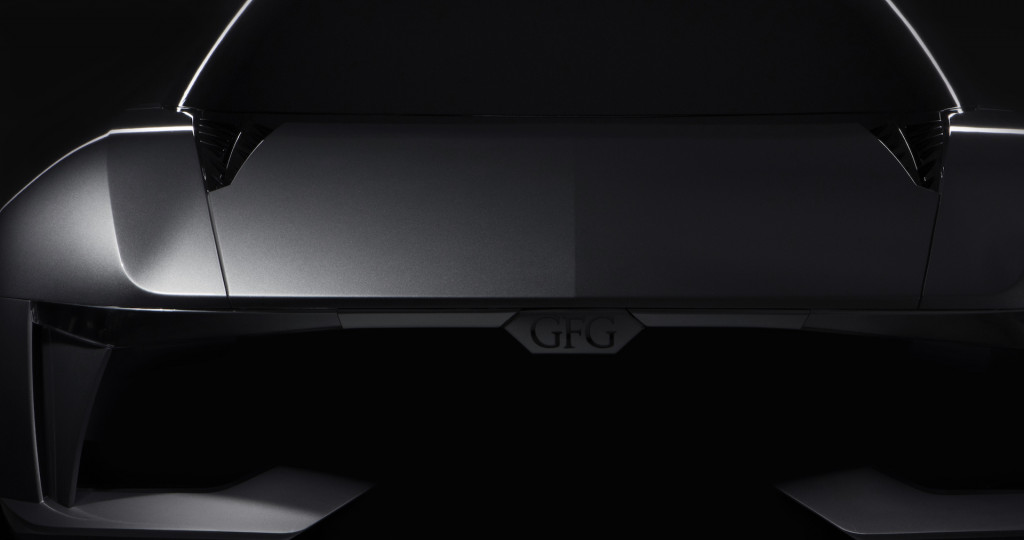 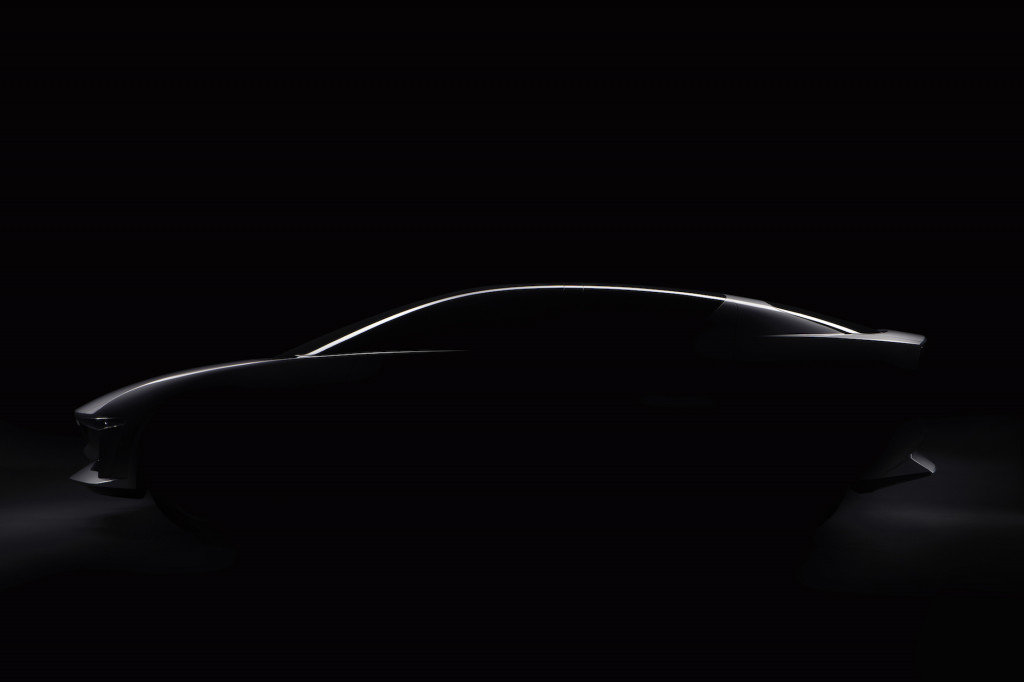 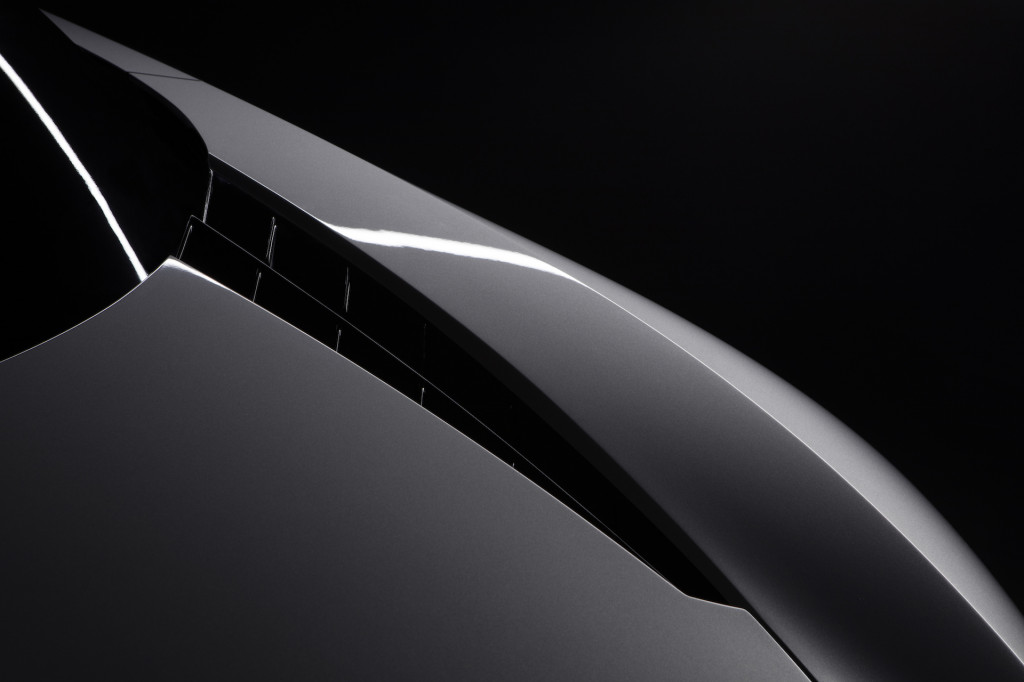 Renowned designer Giorgetto Giugiaro has left Italdesign, the company he founded half a century ago, after it was purchased by Volkswagen Group.

But he's hardly been slacking off. His new company, GFG Style, is already working with a new Chinese energy company to "explore broader innovations in e-mobility."

For Geneva, the design house will unveil an all-electric sedan concept boasting a vast amount of self-driving technology.

Giugiaro said, in fact, that he could have eliminated the steering wheel altogether from the so-far-unnamed concept, but decided against it.

Chinese backers are also behind a new electric sedan concept, dubbed Venere, to be introduced by a company known as LVCHI.

The vehicle comes from well-regarded Italian design firm I.D.E.A., though no renderings have yet been revealed.

The company says the Venere will be closer to a fully functioning, drivable prototype than a pure design concept, and supposedly it will offer performance equivalent to that of a supercar.

Limited production is planned to start in Turin, Italy, as early as next year.

We'll update this list as more information is revealed.