It's an interesting moment to contemplate the future of DC fast charging for electric cars right now.

Electric cars with 200 miles or more of range are starting to hit the market, with half a dozen expected to be in showrooms three years hence.

And international standards groups are working to boost fast-charging rates from the 50-kilowatt level found today to as much as 150 or even 300 kw.

While Tesla Motors has laid out the model for a national network of fast-charging sites along highways in multiple countries, the rest of the industry is at least a few years behind.

And no carmaker is likely to replicate the vision, dedication, and commitment to fast charging that the Silicon Valley carmaker displayed starting three years ago.

That said, the number of fast-charging stations for non-Tesla cars that will likely be live five years from now will likely dwarf the Supercharger network at its current size. 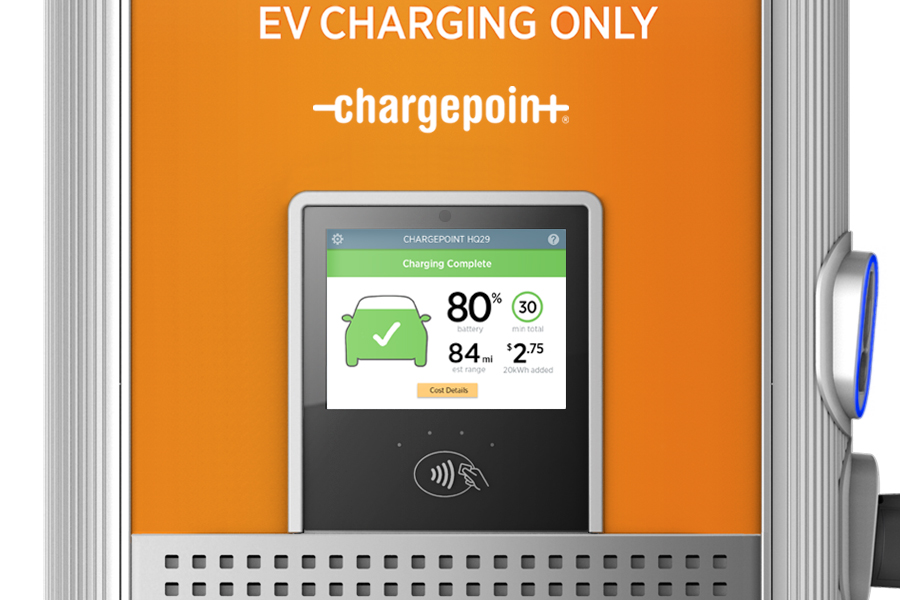 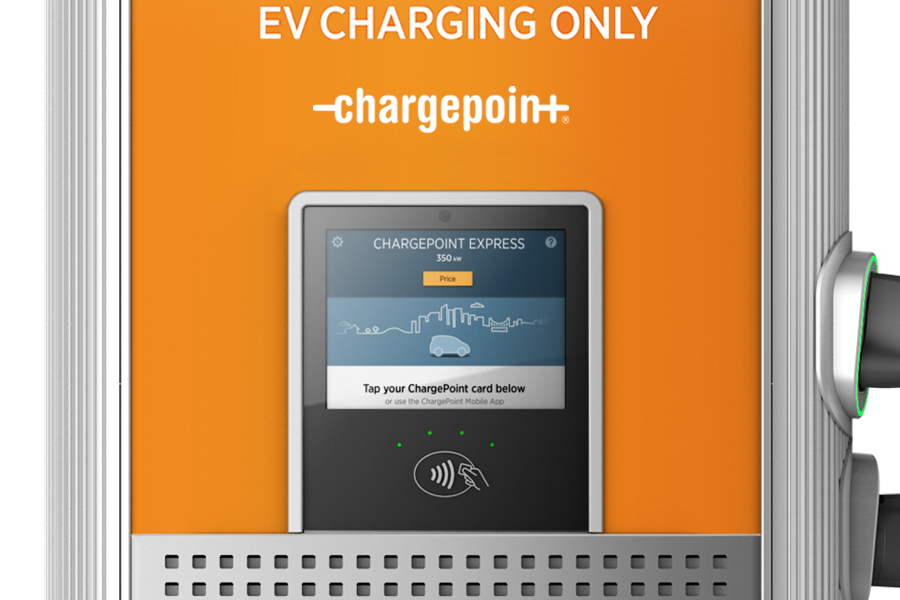 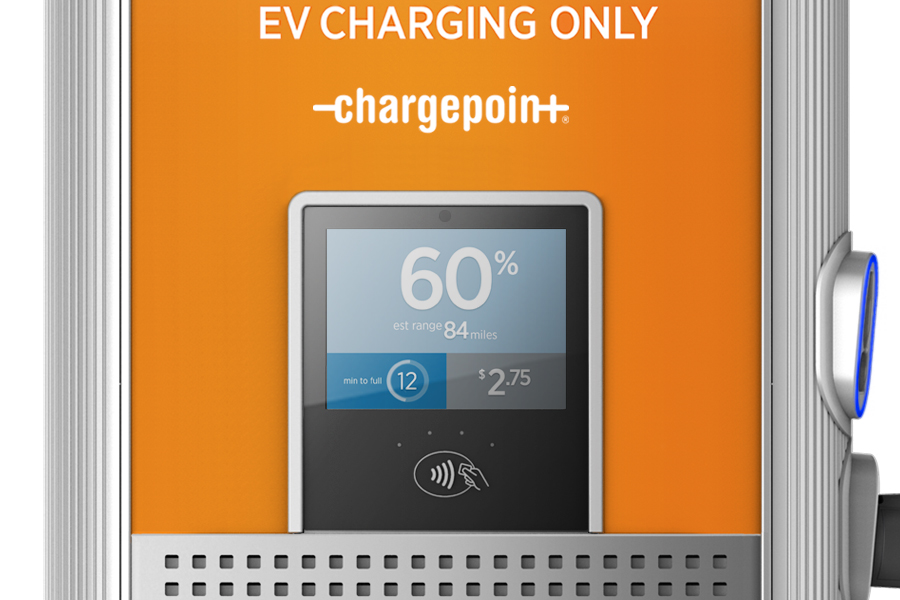 That's the context for the announcement by charging-network operator ChargePoint of its new Express Plus fast-charging hardware. The company detailed its new offering at the Consumer Electronics Show in Las Vegas two weeks ago.

The Express Plus hardware has a modular design that can be upgraded as demand increases, and that can dynamically change charging rates at different charging stations as needed by different vehicles.

The company has roughly 400 DC fast-charging sites operational today, out of almost 100 times that number of total charging locations.

But, ChargePoint CEO Pat Romano told Green Car Reports during an interview at CES, it's clear that the number will rise substantially as longer-range and mass-priced battery-electric vehicles are used for road trips in future years.

The company's goal in designing the Express Plus system was to create "future-proofed" hardware that cut the cost as much as possible for charging-site owners. 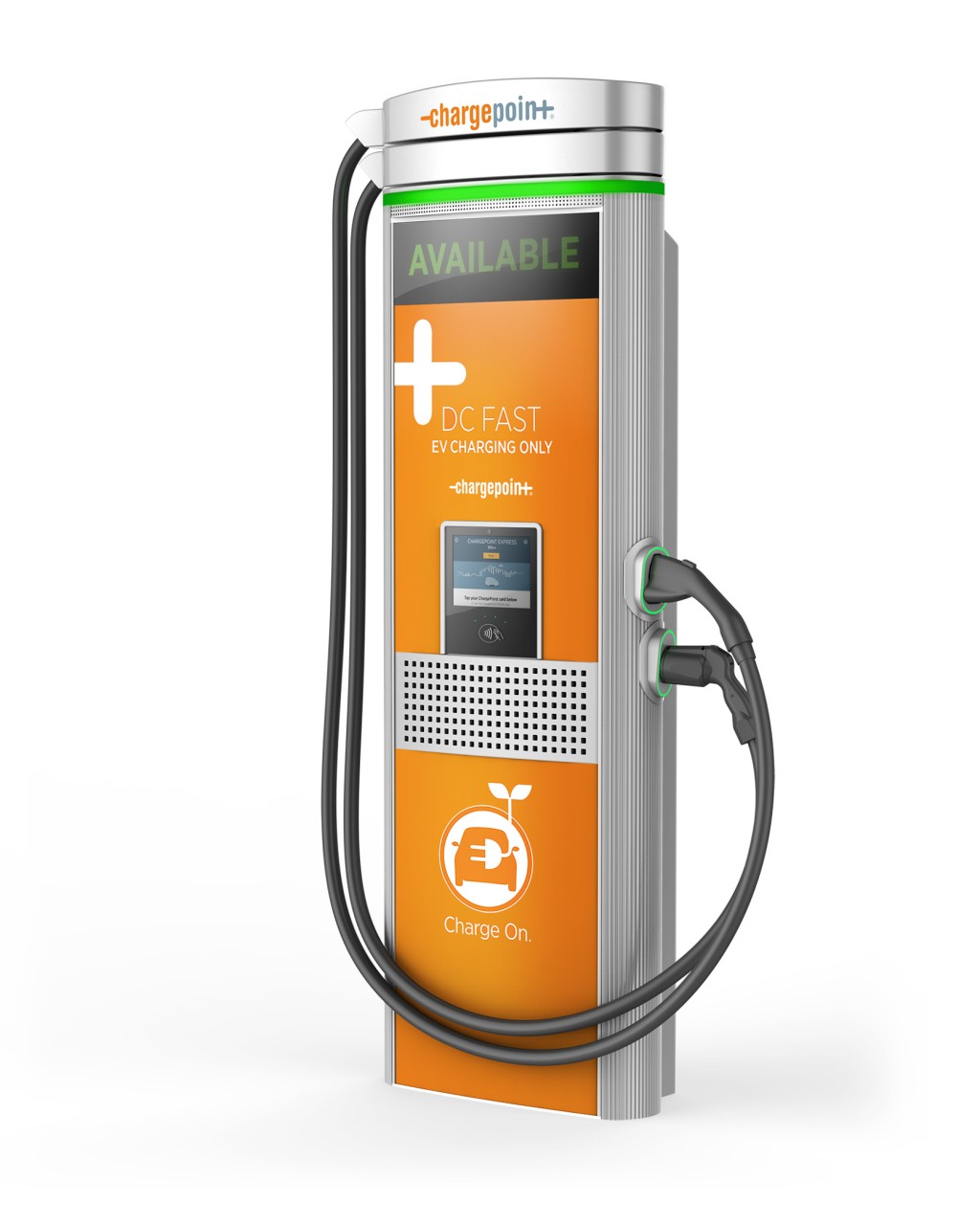 More than that, he said, the company felt it was crucial to avoid requiring specific models of car to park in specific slots in order to charge at their maximum capability.

The Express Plus charging station themselves have two cables, which will likely be configured with one for each of the CCS and CHAdeMO charging plugs.

High-mounted 20-inch LED display screens are readable from several car lengths away; in future, Romano said, they could show which car is due to use the station next if there's a queue.

The cables swing out on arms mounted at the very top of the unit, for maximum flexibility to reach charging ports in different locations on different vehicles without dragging many feet of cable on the ground.

The Express Plus "Power Cube" that distributes electric current among the different charging stations will be located nearby; it's a 6-foot cube with grid-patterned metal sides that don't necessarily require hiding behind a fence.

The cube contains a rack that can be fitted with up to 16 charging modules, similar in concept to the modular blade-server computers mounted in racks used at large data centers. 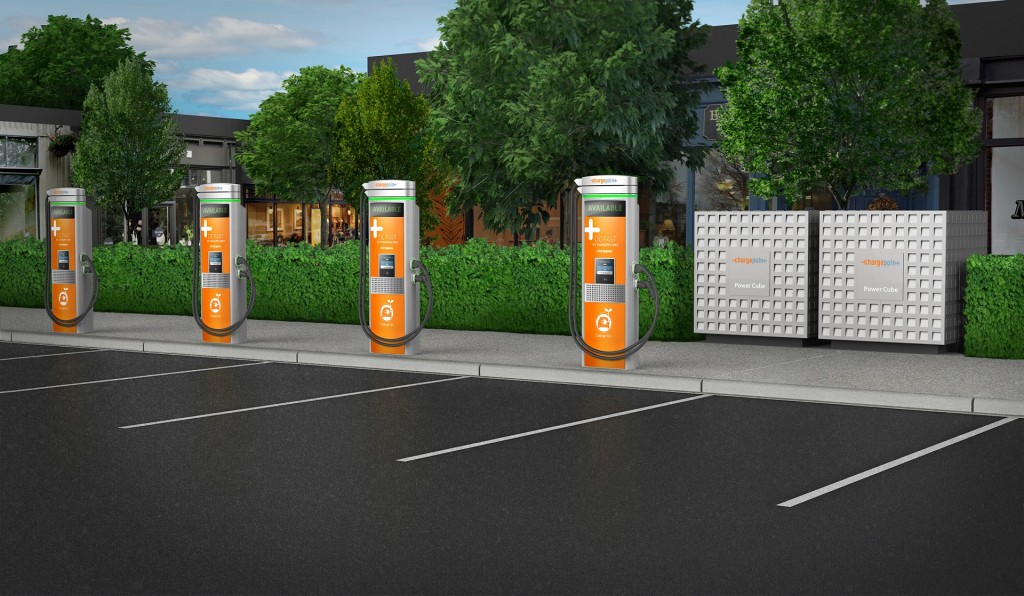 That gives it a maximum output power of 500 kw at 400 amperes, which can be distributed among up to eight separate charging stations—meaning that it can charge vehicles with even the very highest charging rates envisioned for 2020 or later.

Importantly, that output can be dynamically split among different charging stations as vehicles near their end of their charging curves and different models come and go—assuming the multiple charging spaces at the site where it's installed are cross-connected when they're built.

ChargePoint's hardware comes with a suggested construction plan with interconnections among parking spaces that takes advantage of the capability to allocate power among vehicles dynamically as needed.

The software that controls the charging also optimizes the usage of each power module, and balances the number of hours each module is used.

ChargePoint itself doesn't sell charging to drivers. It provides hardware and operates a charging network for entities that want to offer charging without installing or managing equipment—including retailers, hotels, and governments.

The first Express Plus hardware will be delivered starting in July, the company says.