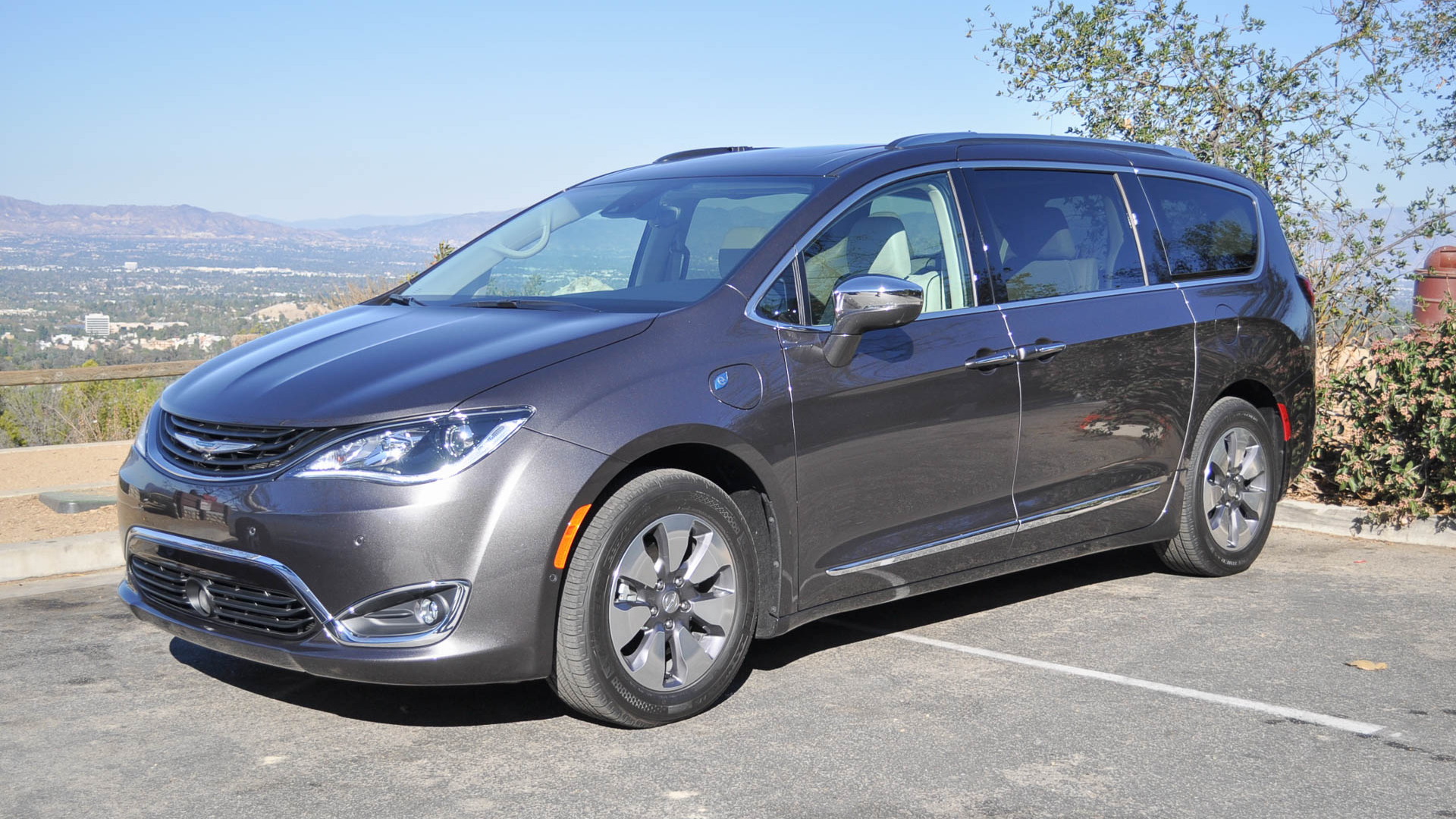 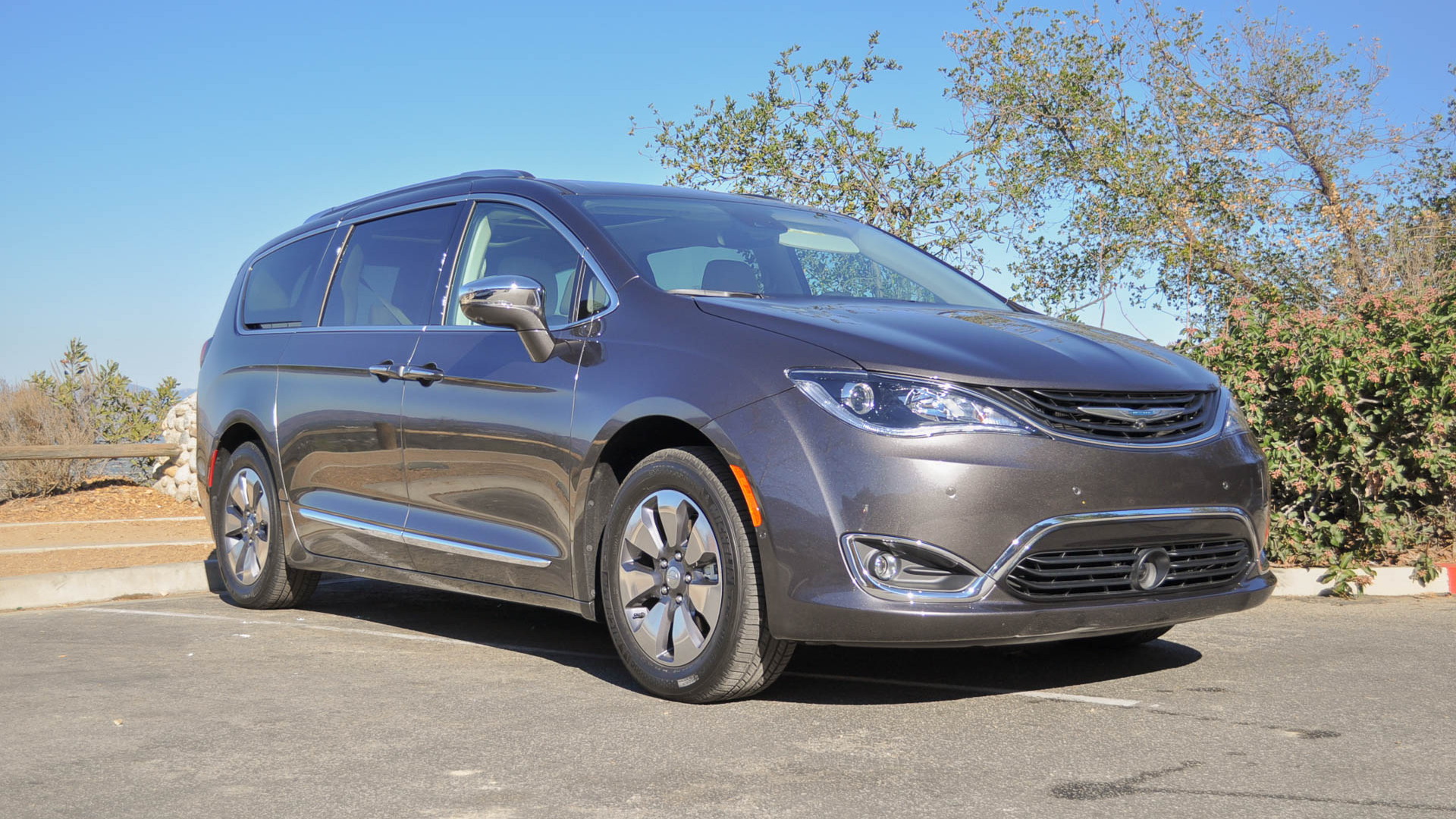 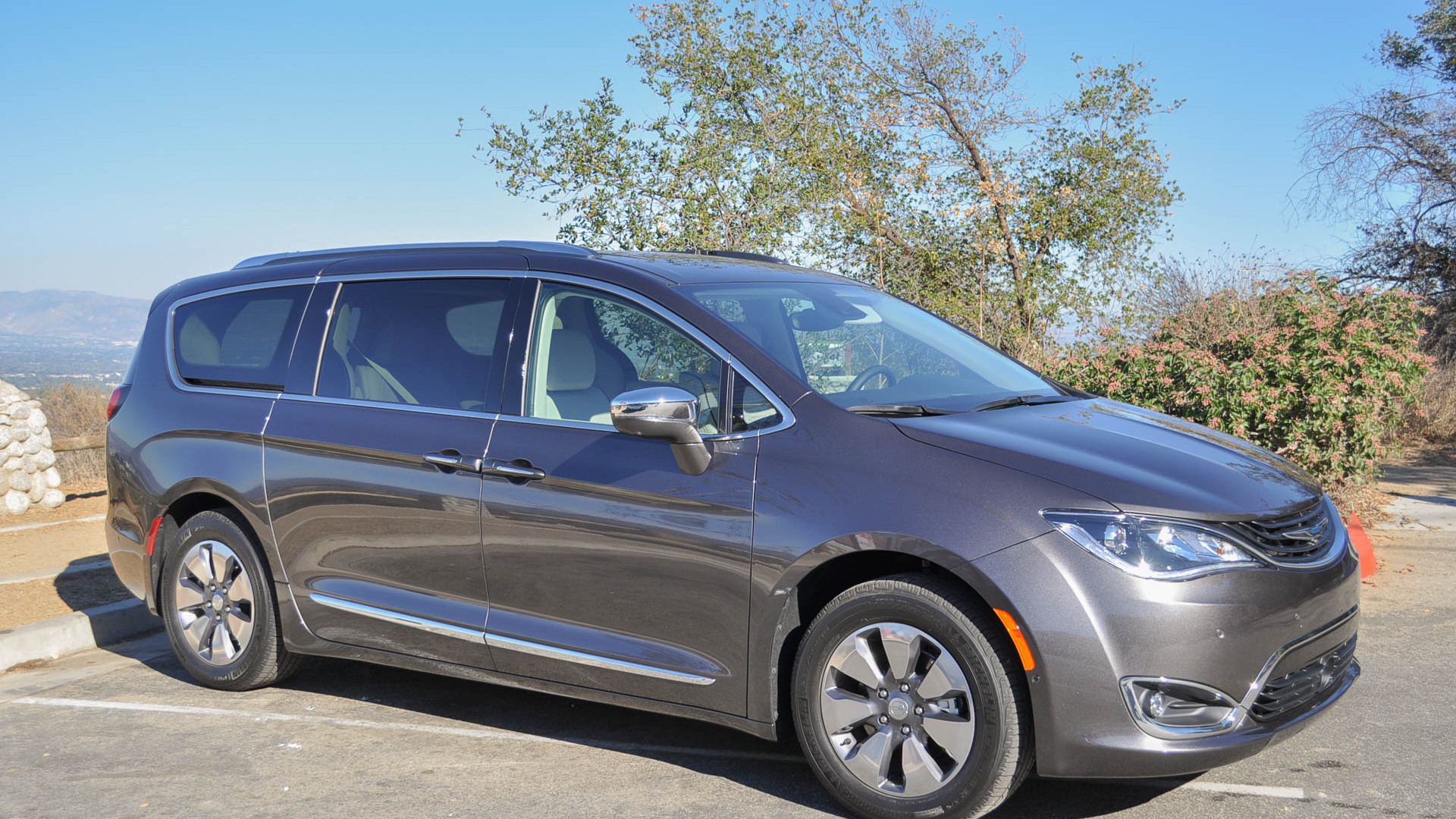 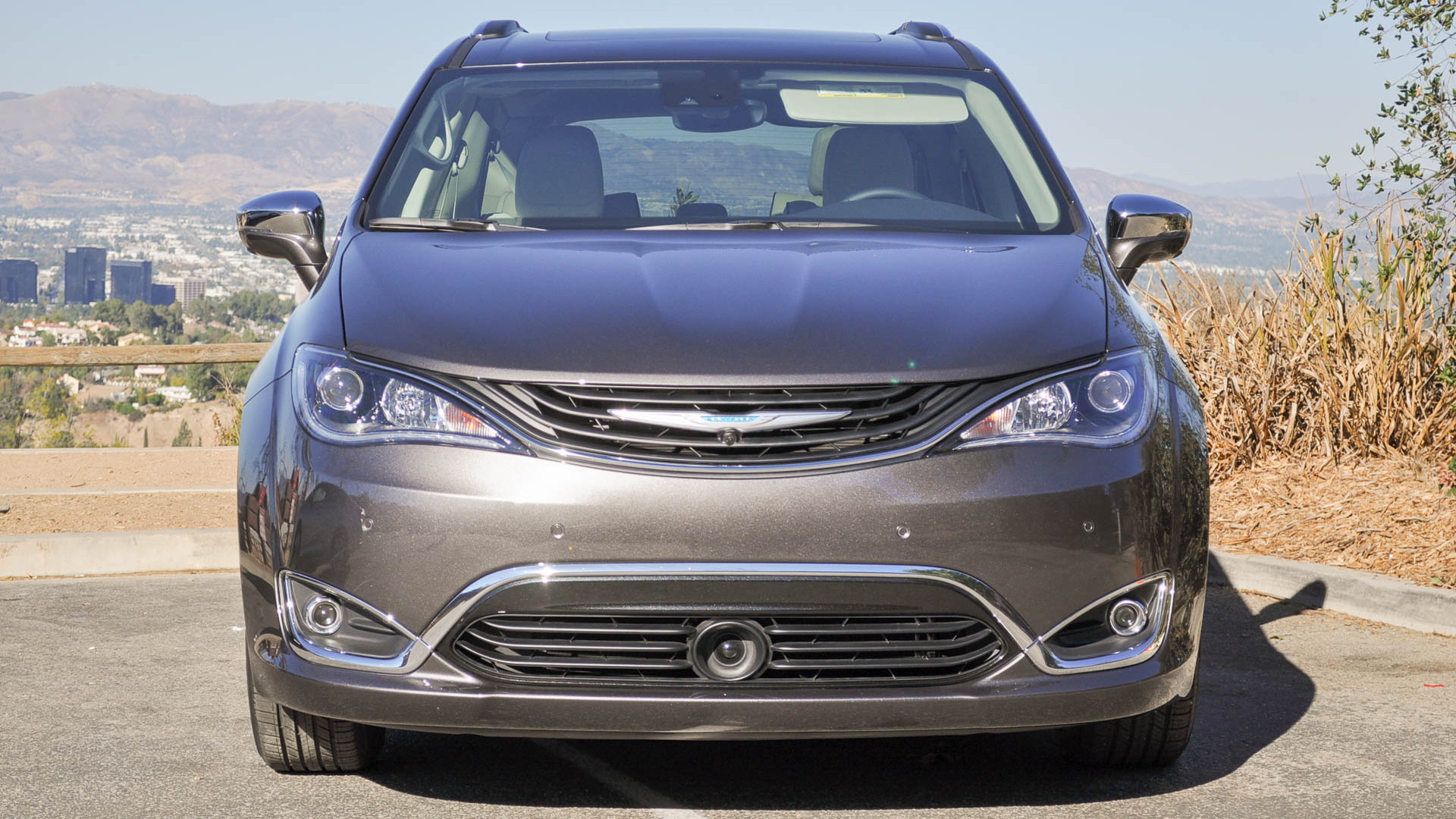 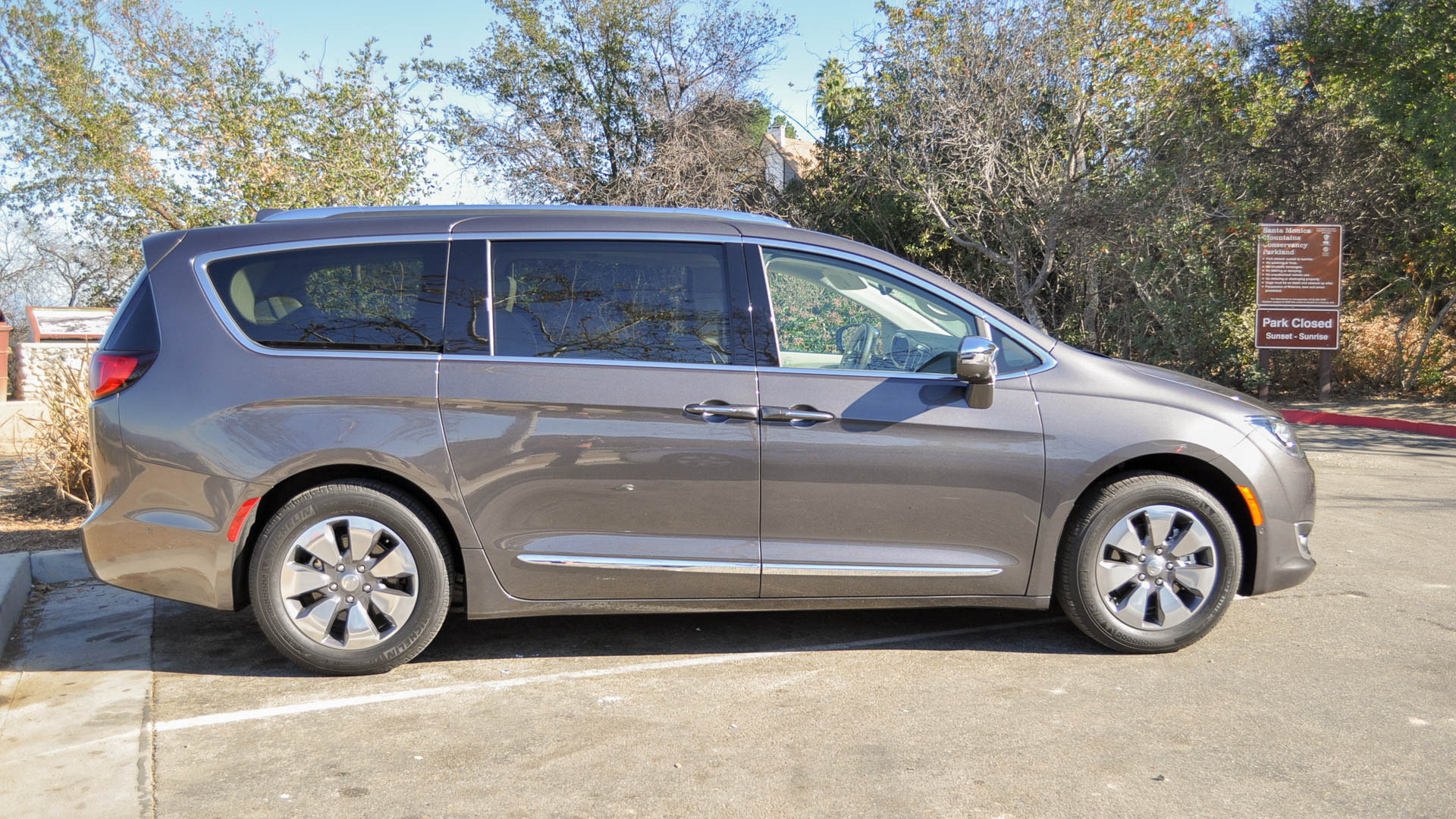 The 2017 Chrysler Pacifica Hybrid wraps a number of firsts into one innovative package.

The Pacifica minivan, launched this year, has received positive reviews for its combination of stylish design, comfortable interior, easy-to-use infotainment, and capacious carrying capacity for up to eight adults and their goods.

Despite its name, the Pacifica Hybrid is a plug-in hybrid with a 16-kilowatt-hour battery pack that gives it an estimated EPA-rated electric range of 30 miles. That makes it the world's first plug-in hybrid minivan.

The combination of an seven-seat vehicle with usable electric range will be appealing enough for families and others who like the utility, capacity, and ease of entry that minivans offer.

But the Pacifica Hybrid is also good as an electric vehicle, with strong enough electric power that it doesn't kick on its engine at the merest provocation, as do lower-range plug-in hybrids from luxury makers like BMW and Mercedes-Benz.

We tried hard to get the vehicle into this year's Green Car Reports Best Car To Buy award competition, but Chrysler's embargo on driving impressions (today) missed our deadline for the award by exactly one day.

Getting behind the wheel of the plug-in hybrid Pacifica, very little is changed from the conventional version that is now appearing on U.S. roads.

Slightly different frontal styling and a charge port on the left-front fender are about the only clues to the electrified minivan's very different powertrain.

And Fiat Chrysler, whose CEO has long trumpeted his irritation at having to produce zero-emission vehicles to stay legal in California, has produced a remarkably good plug-in hybrid for its first effort.

The company's philosophy is that this is a powertrain option, not a lifestyle, and so it's relatively simplified.

This explains, among other things, the choice of name: "hybrid" is a familiar term that translates to better energy efficiency, whereas "plug-in hybrid" will likely be confusing to family-vehicle buyers of the sort who don't read sites like this one.

Starting off with a charged battery, the Pacifica Hybrid defaults to all-electric operation—though unlike the Prius Prime, it will kick on the engine when full throttle is needed (and keep it on for long enough to warm up the emission-control system).

In a variety of drive routes and conditions among three different High Gear Media editors, we found the plug-in minivan to be a capable performer on electricity alone.

It's hardly Tesla-fast, but in local use and even on highways up to about 70 mph, it will stay in all-electric mode and most likely deliver its rated 30 miles of electric range. (We haven't yet tested it in winter weather, however.)

In mixed driving conditions, including lots of up- and downhill stretches, we saw 32 miles before the battery was depleted. In the right conditions, we might expect as much as 35 miles of electric range.

The accelerator is linear and easy to modulate, and we found the braking good: progressive and without any annoying regenerative traits. Switching from all-electric to hybrid mode was smooth, seamless, and shudder-free.

A "low" setting increases the regeneration, but it's nowhere near as strong as the BMW i3, Chevy Bolt EV or Volt, or any Tesla model.

There's no Volt-style increase in regenerative braking on demand, which means one-pedal driving would be close to impossible. Nor is there an "EV only" mode or an option to conserve battery charge for later use.

Asked about this, Chrysler engineers essentially said they'd wanted to keep the driving experience as familiar as possible, since they felt a large number of Pacifica Hybrid buyers would likely be new to hybrids and plug-in vehicles.

Given its first-in-the-segment position, that's not an unreasonable assumption, we think.

The "easy and understandable" approach extends to the instrumentation, which is standard Pacifica with a few additions: an energy tab on the center touchscreen that shows energy flow, and a powertrain display between the gauges.

On the road, the ride is smooth and the roadholding is good. Even the standard Pacifica is a large vehicle, and the added 650 pounds of the hybrid version—with the battery mounted below the second-row passengers' feet—keeps it firmly planted in turns.

Recharging the 16-kwh battery takes 2 hours with a 240-volt Level 2 charging station, or about 14 hours on a standard 120-volt household circuit. The onboard charger is rated at 6.6 kilowatts.

Once the battery was empty, in mixed driving with considerable traffic, we averaged 28 miles per gallon. Final EPA ratings aren't out yet, though the non-hybrid version comes in at 22 mpg combined.

Chrysler estimates an efficiency of 80 MPGe when running electrically, although that's for the city portion of the test and not the combined number. (Miles Per Gallon Equivalent, or MPGe, is a measure of how far a vehicle can travel electrically on the same amount of energy as contained in 1 gallon of gasoline.)

It's worth noting that while the third-row seat in the Pacifica Hybrid still folds flat into its compartment below the floor, the second row no longer does—because Chrysler's "Stow-N-Go" bin for the rear seat is now occupied by the battery.

On the other hand, that gives second-row riders more comfortable seats with thicker and plusher upholstery than those designed to fold into the floor.

The two pieces of the rear seat are removable for maximum cargo capacity, weighing about 60 pounds apiece.

The majority of 2017 Chrysler Pacifica Hybrids are likely to be the Platinum model starting at $44,995, its maker says, though the Premium base version starts at $41,995. Both prices are before the mandatory destination fee.

All Pacifica Hybrids qualify for the full $7,500 federal income-tax credit for purchase of a plug-in vehicle, and a $1,500 purchase rebate in California plus "green sticker" single-occupant access to that state's highway carpool lanes.

The 2017 Chrysler Pacifica Hybrid will go on sale later this year, and arrive in dealerships in volume early next year. It will be distributed nationally.

EDITOR'S NOTE: An earlier version of this article referred to the Pacifica Hybrid as an "eight-seat" vehicle. While a version of the conventional Pacifica is available with a three-position second row, the hybrid model comes only with captain's chairs in the second row, which are standard for its two upper-level trim options. We thank reader Sopfu for the correction and apologize for the error.