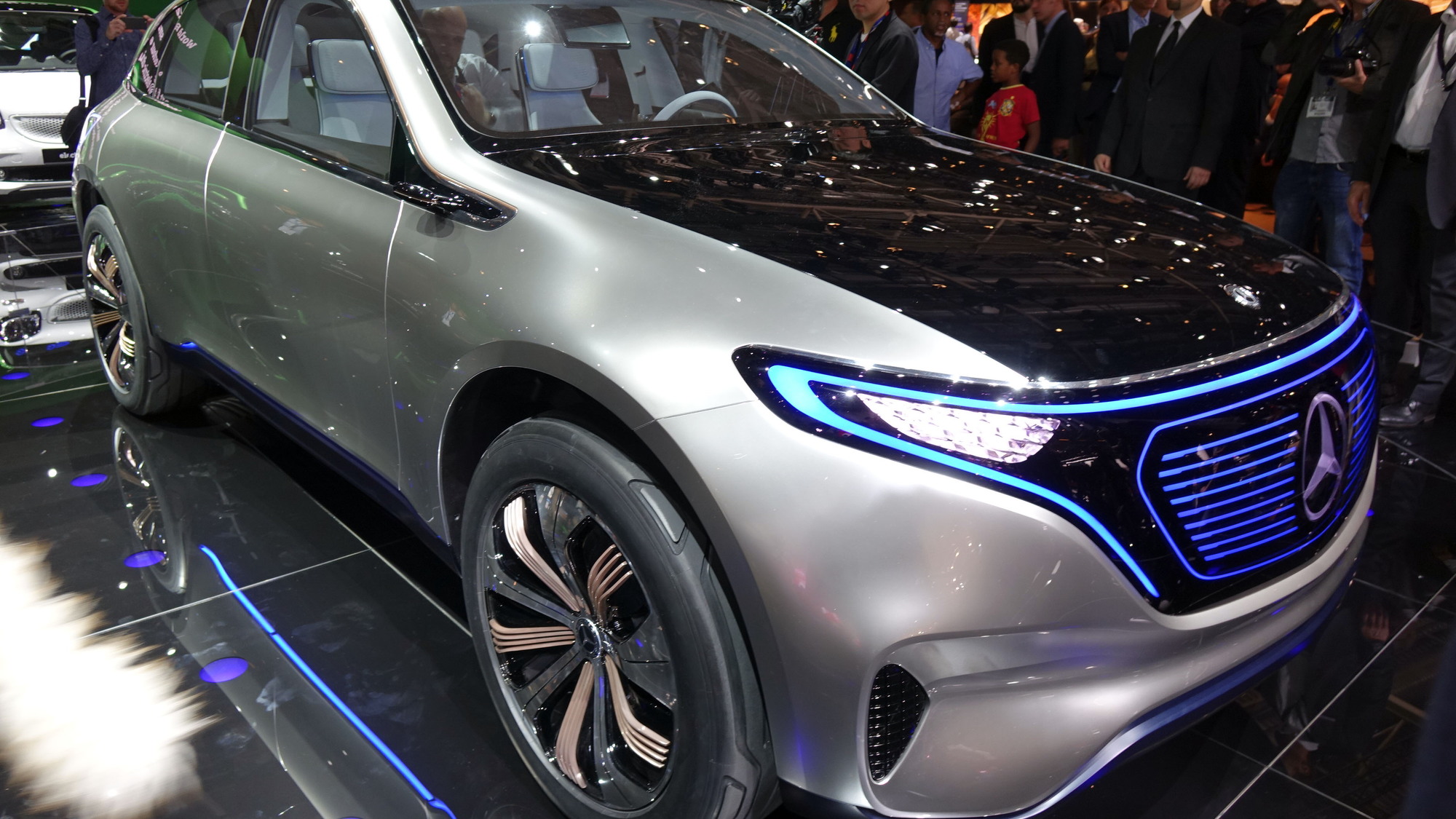 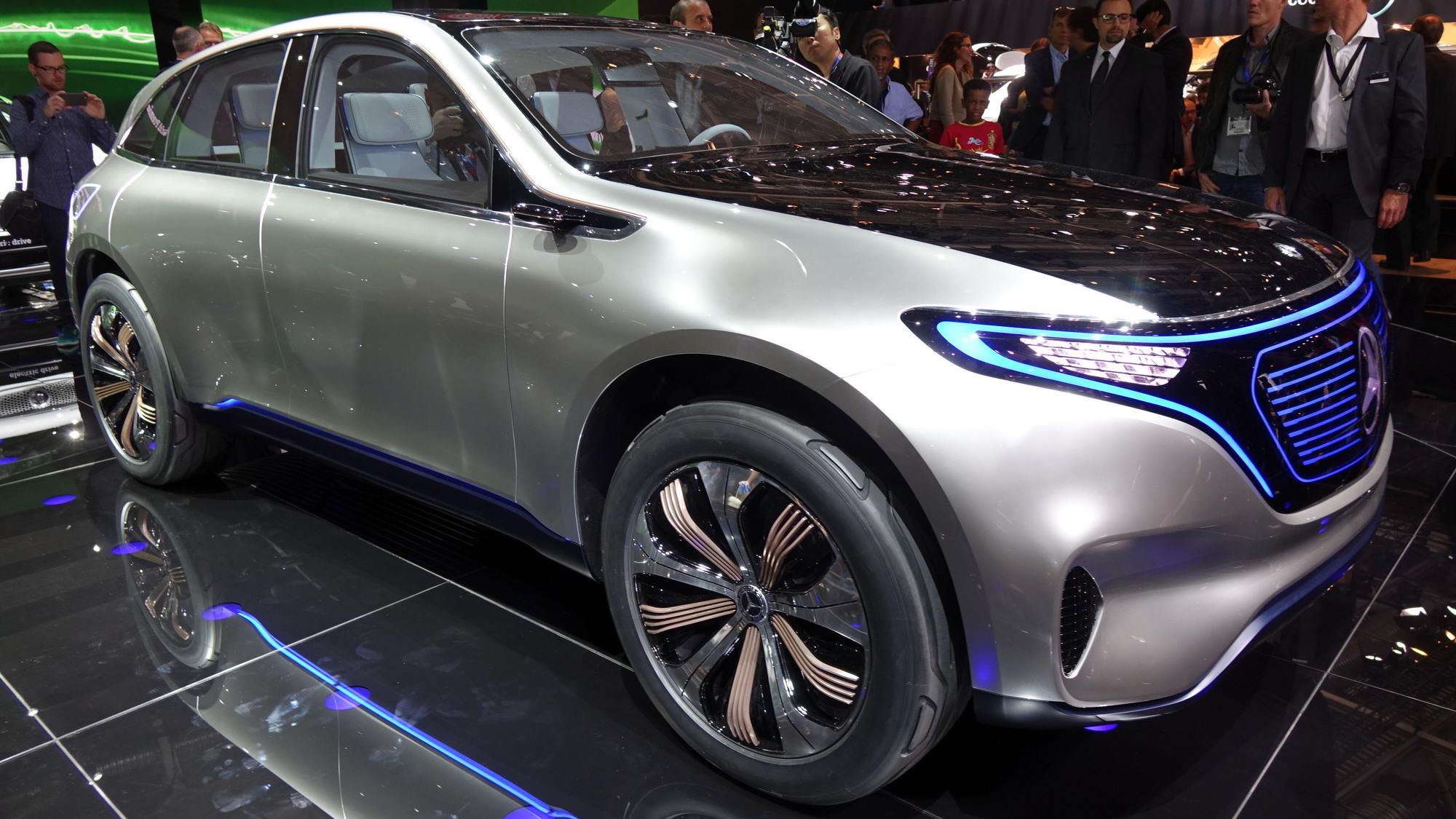 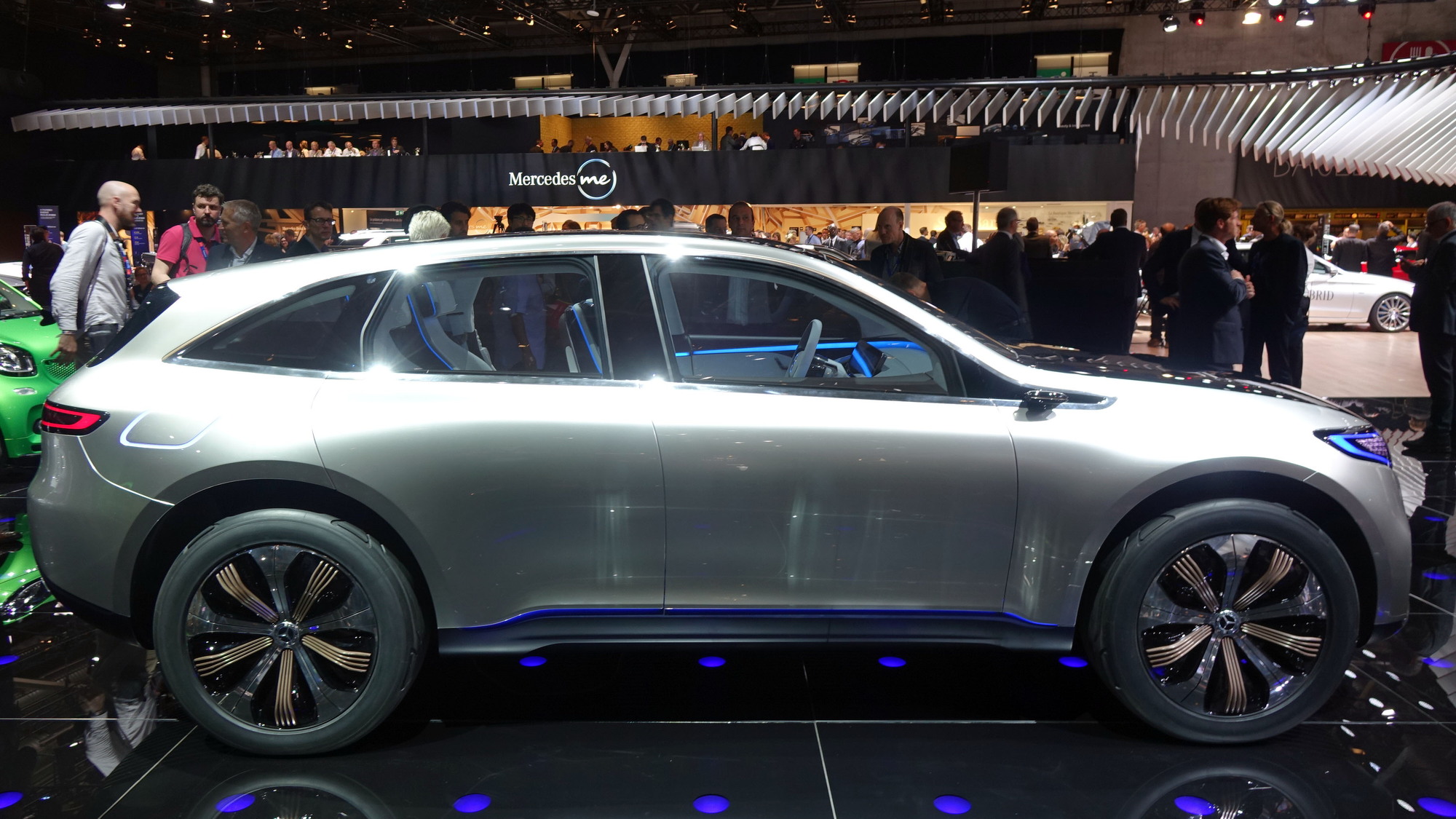 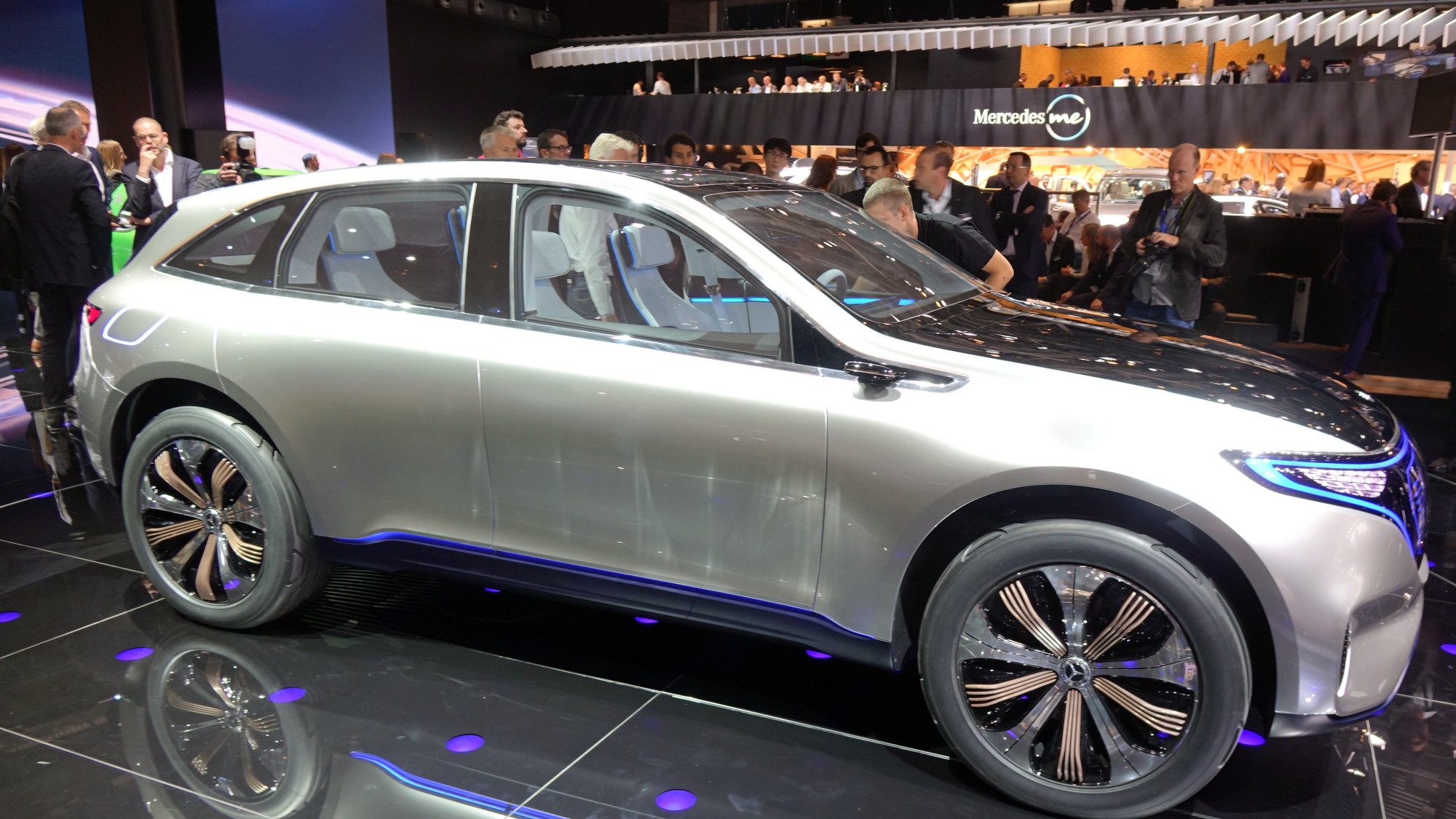 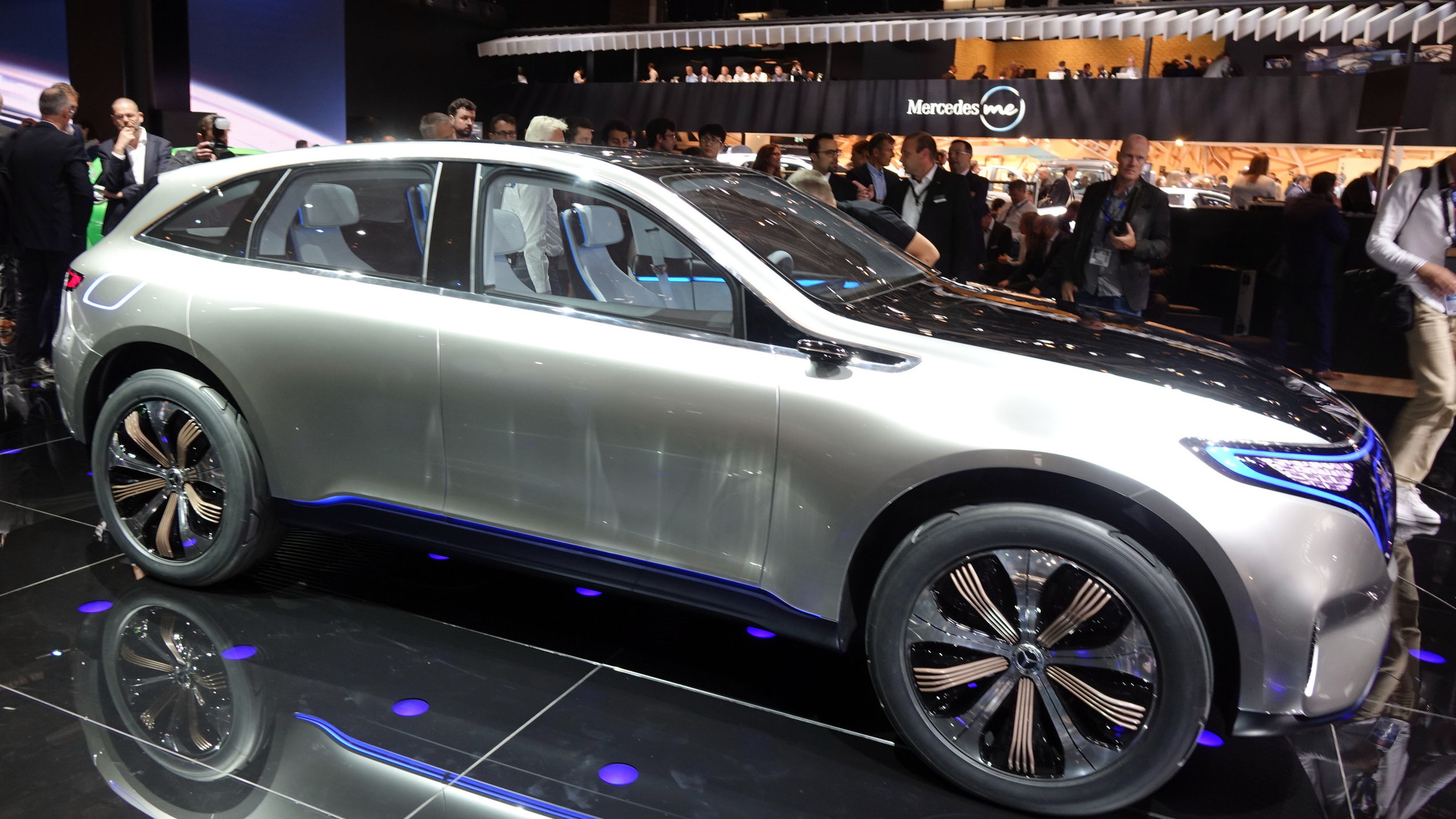 Mercedes-Benz took to the stage at the 2016 Paris auto show with a quirky new concept car that the German automaker says serves as a forerunner to its upcoming lineup of electric cars.

Mercedes chief Dr. Dieter Zetsche said that one of the biggest hurdles automakers will face in the future is e-mobility.

Although it looks rather like the company's GLC compact crossover line, the Generation EQ is said to be fully independent of its internal combustion cousin.

The automaker says that the Generation EQ introduces the public to four main pillars:

Those are fairly descriptive on their own, but they indicate that Mercedes' plans for what is expected to be a full sub-brand are especially comprehensive.

To that end, the vehicle rides on its own, dedicated, modular architecture, which will undoubtedly underpin additional body styles.

As for the Generation EQ, its look is sort of a hybrid between a traditional crossover and a more shooting brake-esque vehicle.

Its 21-inch alloy wheels are probably too big for production, but Mercedes says that they aid the vehicle's aerodynamics. Inside, the crossover's style clearly draws from Mercedes-Benz's current design language, but it trades leather and wood for lightweight materials and a more sparse overall feel. A 24-inch OLED screen provides all sorts of relevant information

Given that the Generation EQ lineup is designed to be shared, its third pillar, it comes as little surprise that the interior looks a little more "easy clean" than decadent. That said, there's plenty of leather and, interestingly, some rose gold inserts.

That's made possible by a pair of electric motors—one to provide power to each axle—and a lithium-ion battery integrated into the vehicle's floor. The show car's combined output is 300 kW, or a hair over 400 horsepower, which helps the chunky vehicle accelerate from a stop to 62 mph in under five seconds.

Mercedes tapped parent company Daimler's Accumotive division for the lithium-ion battery pack, which has a capacity greater than 70 kWh.

If the Generation EQ line is to be shared, Mercedes admits that short charging times are essential. Mercedes says it is working on a vehicle infrastructure that will reduce charging times to just 5 minutes for a 100 kilometer urban range—a lofty goal.

And the Generation EQ represents a major step toward autonomous motoring. Its computer systems have maps that understand curve radii and the position and sizes of roundabouts, a continual challenge on the road toward self-driving cars in Europe.

Look for Mercedes to follow up on the Generation EQ with more concepts and hints to production over the next couple of years.