Another range-extended electric vehicle is getting closer to the market, as Via Motors' electric cargo van has moved one step nearer to production.

Via says the van has now successfully passed all crash testing required before it can be put on sale.

The van is based on a Chevrolet Express, but Via replaces the standard V-8 engine and transmission with a complete plug-in powertrain, consisting of a 4.8-liter V-8, 175-kilowatt electric drive motor, and a 22-kilowatt hour lithium-ion battery pack.

Via says the van has an electric-only range of 35 miles, and a total range of 400 miles.

Via estimates average fuel economy at 100 mpg in mixed driving, but that "blended" figure assumes the vehicle will be driven no more than 60 or 70 miles in daily use. The more miles driven on gasoline, the lower the effective mpg. 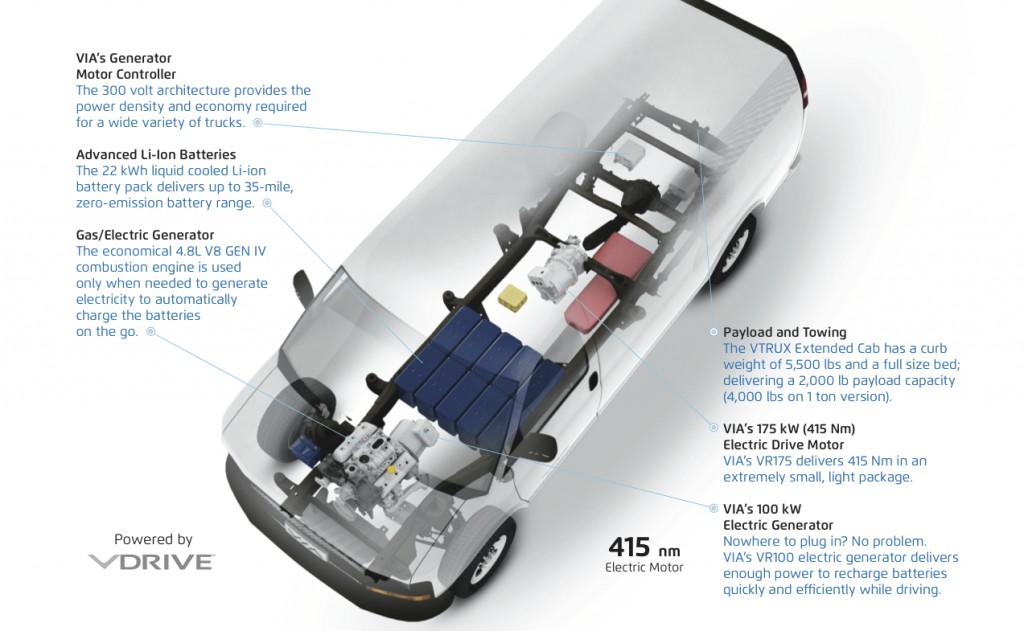 An added feature is a 110-volt power takeoff, which allows operators to plug in power tools and other electrical devices.

Via is also experimenting with electric vehicle-to-home backup power, which could let owners use their trucks to supply home electricity in case of an emergency.

The van will join Via's lineup of range-extended electric vehicles based on General Motors trucks. Those include a Chevrolet Silverado-based pickup and a Suburban electric sport-utility vehicle. Both are sold under Via's VTrux brand.

The pickup and SUV use a different powertrain from the van, consisting of a 4.3-liter V-6, 300-kW electric motor, and a 24-kWh lithium-ion battery pack. Via says they will return the same blended 100 mpg.

Via is currently taking deposits on all three vehicles; the estimated base price for all three is $79,000 each.

The company expects that the majority of buyers will be fleet operators, who will see a payback on the lifetime ownership cost despite the much higher initial price.

At the 2013 Detroit Auto Show, Via upped its own game with the XTrux, a bespoke and more powerful Silverado-based pickup with a 5.3-liter V-8 range extender, 24-kWh battery pack, and 800 horsepower.