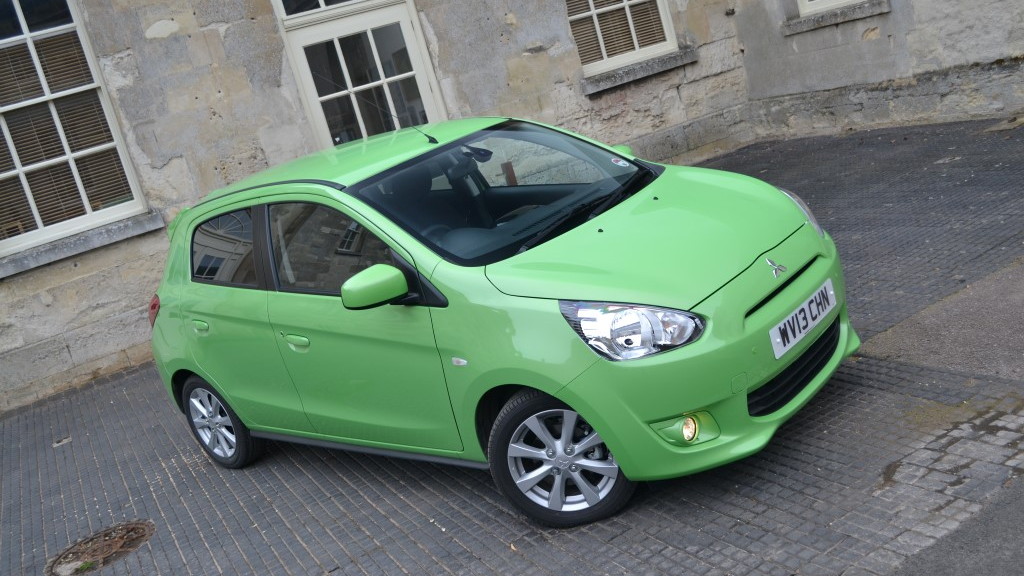 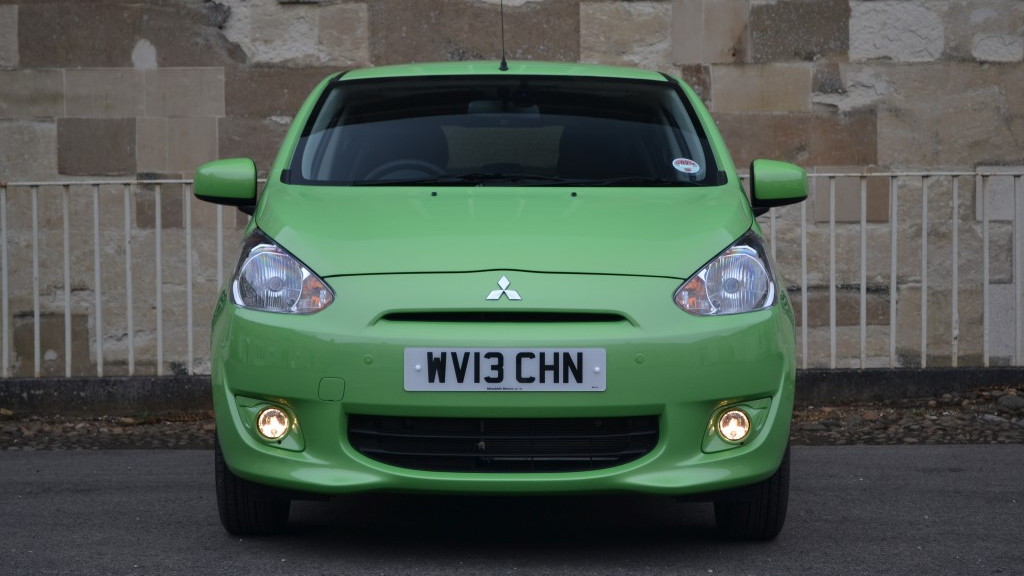 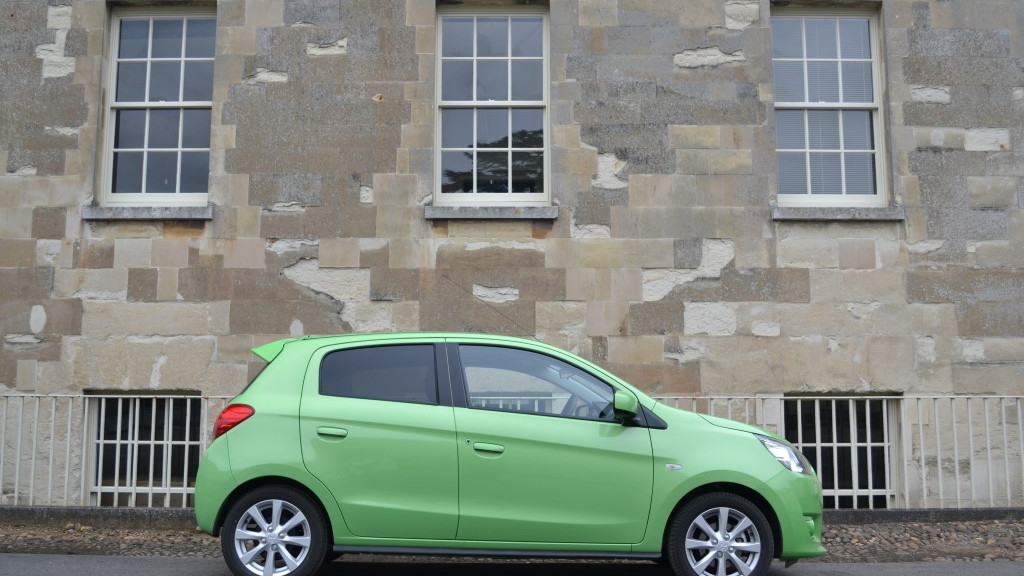 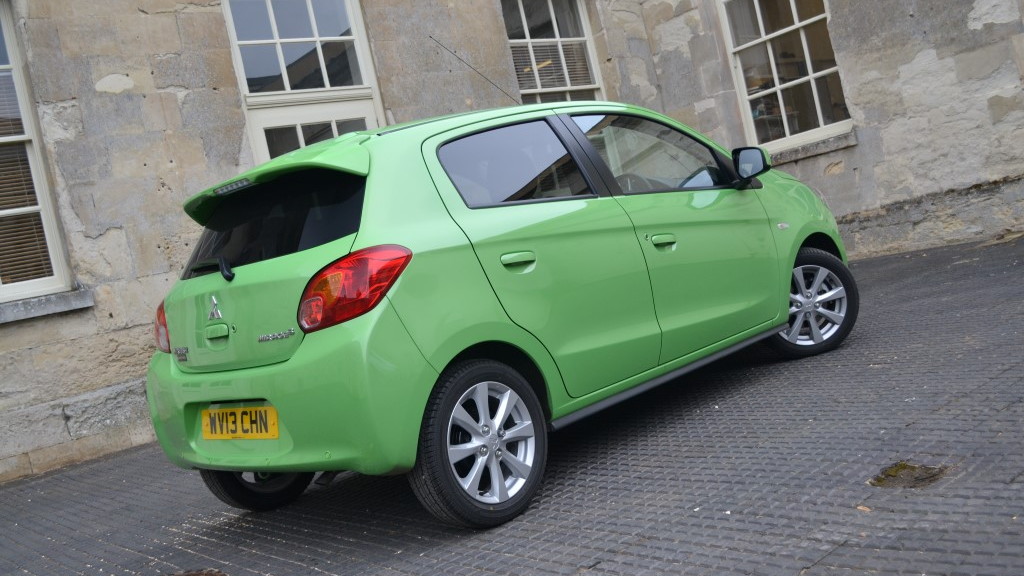 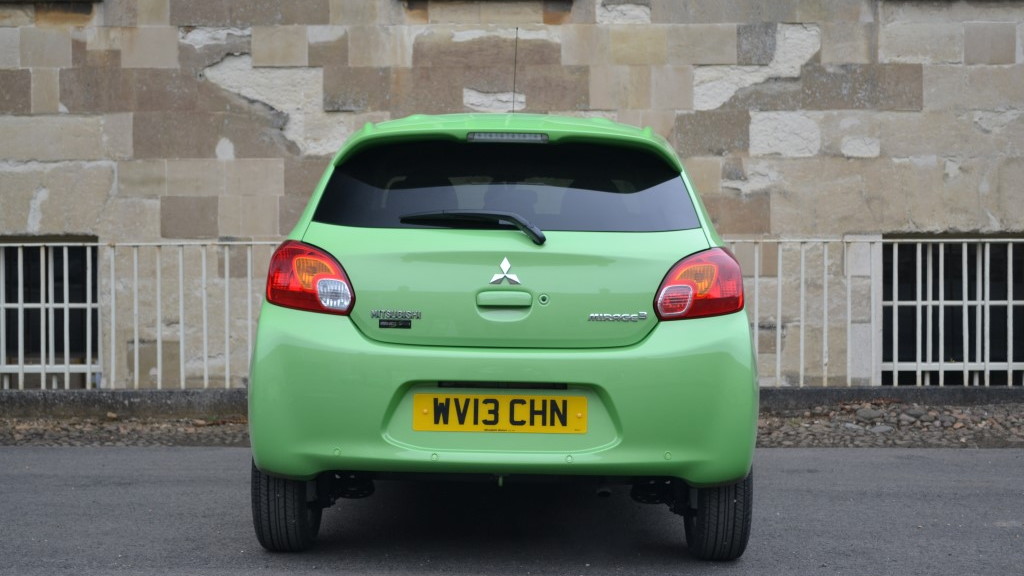 12
photos
Yes, the green paintwork was a deliberate choice.

Not that the Mitsubishi Mirage, widely expected to be unveiled at the New York Auto Show next week, isn't available in any other colors. But we couldn't pass down an opportunity to drive one which matches with the site's green focus.

The new Mirage is green in more than just color, however.

Size-wise, it straddles the minicar and subcompact segments--think somewhere between a Chevy Spark and Chevy Sonic hatchback in size. But, in the UK trim you see here, it's lighter than virtually all its competitors regardless of segment, more aerodynamic than any, and more frugal than all but the top diesel and hybrid rivals.

First previewed in concept form at the 2011 Geneva Motor Show, the new Mirage is based on Mitsubishi's "Global Small" car platform. It was designed with efficiency in mind from the outset, and while the U.S. engine range isn't confirmed yet, a pair of three-cylinder gasoline units is available in other markets, displacing either 1.0 or 1.2 liters.

We drove the latter, with a five-speed manual transmission rather than the more efficient continuously-variable transmission (CVT). It develops 79 horsepower, and 78 pounds-feet of torque from 4,000 rpm.

On the European fuel economy cycle, the 1.2 manual is a combination good enough for 54.7 mpg. Subtract the usual 20 percent or so to get an EPA-equivalent figure, and that's around 43-44 mpg--combined, not highway.

At the same time, it'll accelerate to 62 mph in 11.7 seconds and top out at 112 mph. That's better than similarly-engined cars in the class manage, which Mitsubishi says is down to the Mirage's low weight--1,863 pounds--and impressive aerodynamics.

Where most cars in the class have a drag coefficient of around 0.32 or 0.33, the Mirage slips through the air with a Cd of 0.27. The body doesn't look dramatically aero-efficient, but touches such as a surprisingly large rear spoiler and sharply cut-off rear corners contribute to the slick shape.

It's a shape that liberates decent interior room too. It was possible for this 5'9" tester to "sit behind himself" quite comfortably--i.e. sit in the rear with the front seat adjusted for the ideal driving position.

Head and legroom are good, the seats themselves proved comfortable over a few hours of driving, and the trunk is par for the class. The interior design is inoffensive, but everything feels a little cheaply-built--Chevrolet, Ford and others have moved the game on for quality in this class.

To drive, the Mirage is much more Hyundai Accent or Toyota Yaris than it is Ford Fiesta or Honda Fit--that is to say, competent, but quite enjoyment-free.

There's fun to be had extracting the engine's performance--three-cylinder units always have a bit of character, and the five-speed transmission was slick and accurate--but it's noisy at the same time. The sounds die down at higher speeds, replaced by wind and road roar instead.

Tackle some corners and the Mirage is far behind cars like the Fiesta. What initially appears to be a compliant ride turns out to be under-damped--small bumps are dealt with, but undulations send the car bouncing around the road, and mid-corner bumps can send you off-line.

This is compounded by electric power steering about as feel-free as it gets. It's pleasingly light at lower speeds, but doesn't weight up as you go quicker. There's actually useful grip from the narrow 175-section tires, but quick cornering is done on blind faith that they'll hang on, as the steering tells you nothing.

We didn't seek to maximize efficiency on our drive--freeway sections were dispatched with swiftly, the country sections likewise--and returned an indicated figure of 39 mpg.

That's not too bad, considering the route, if a fair way from the claimed figure. However, if sold in this format in the U.S, we'd cautiously expect a number in the 40s to be within reach. Whether this engine will reach the U.S, or a more powerful unit will take its place, remains to be seen--so we'll have to wait and find out.

There's a good chance that whatever engine is introduced (we expect to find out if the car does launch at the New York Auto Show), the Mirage will be able to return some decent fuel figures, thanks to the class-leading aero and low weight.

It's just a shame that engineering effort is let down by nondescript styling, a slightly basic interior, and resolutely average driving characteristics.

Catch up with more from New York by heading to our New York Auto Show page.