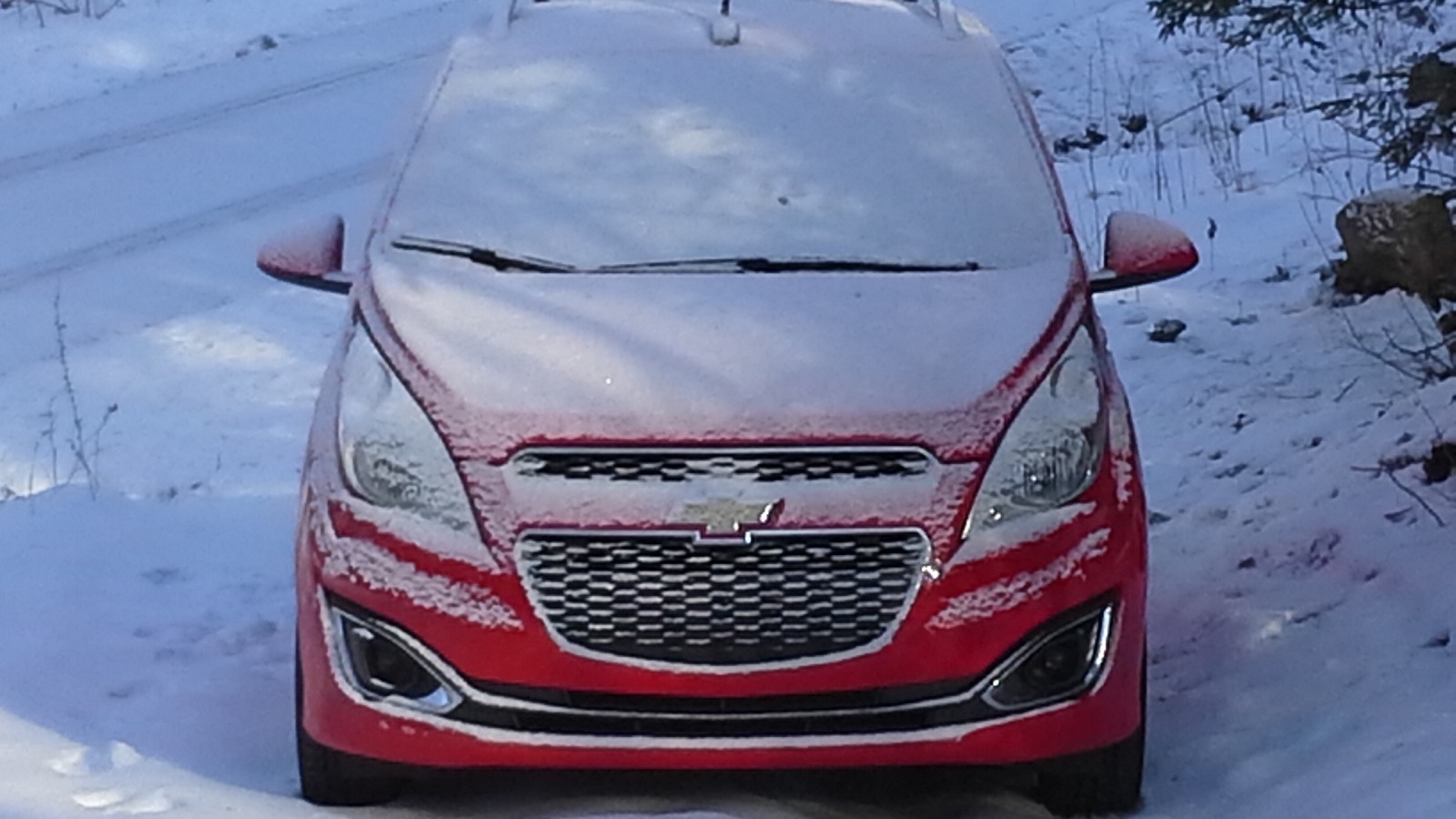 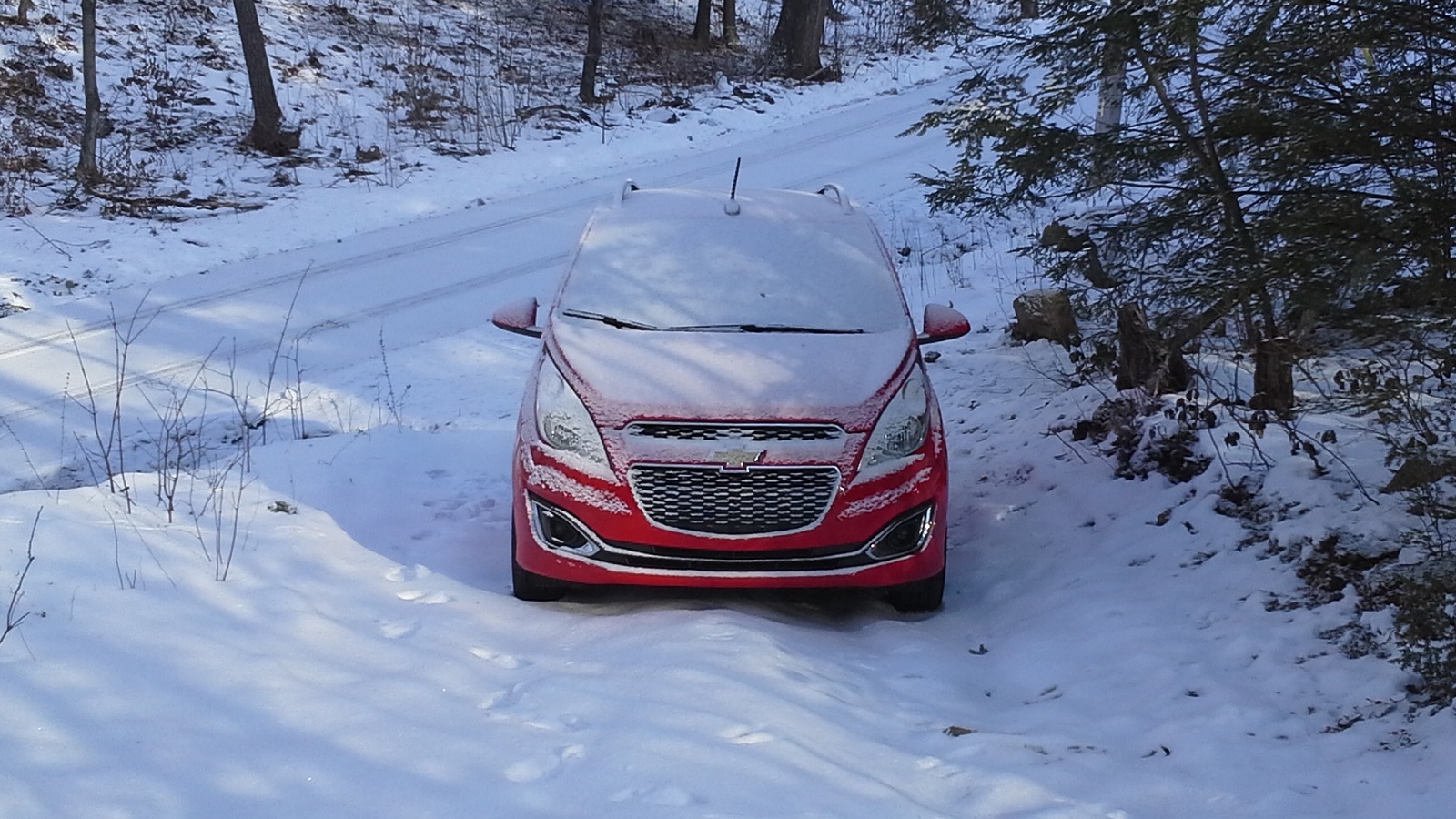 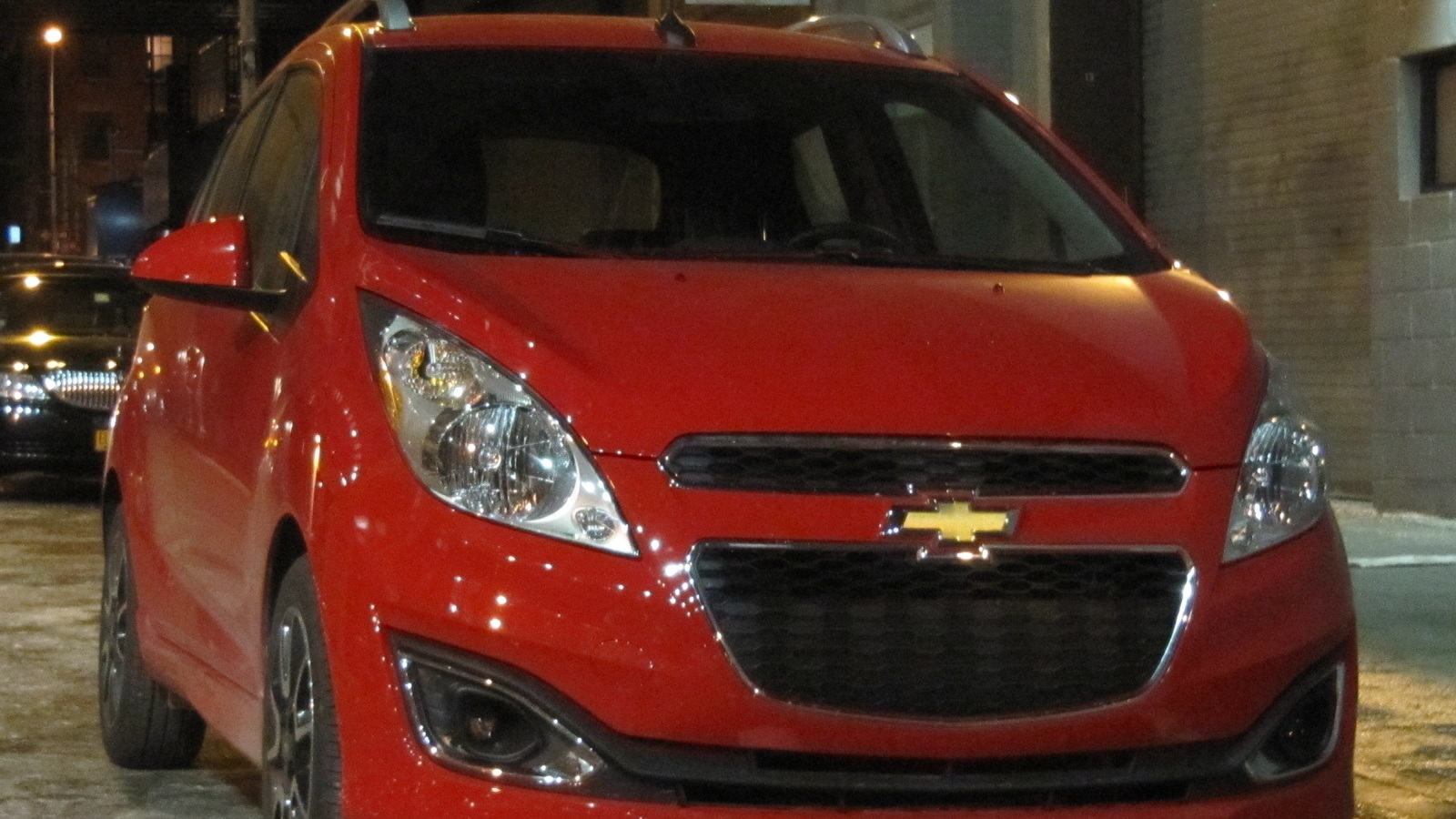 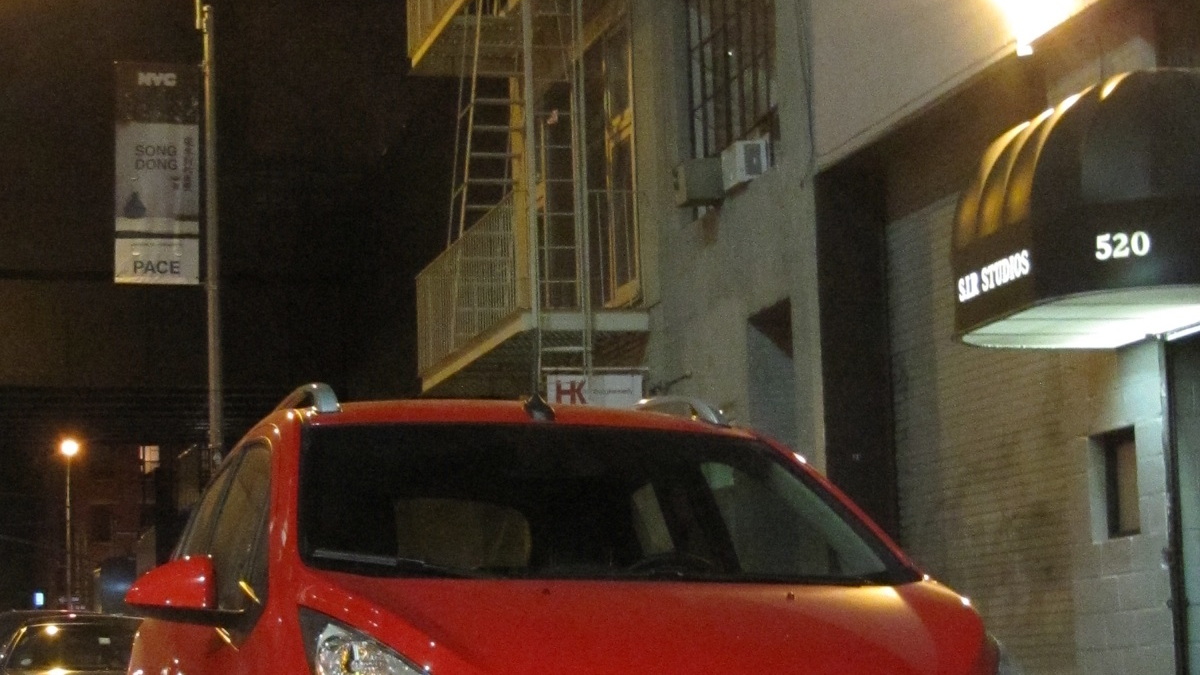 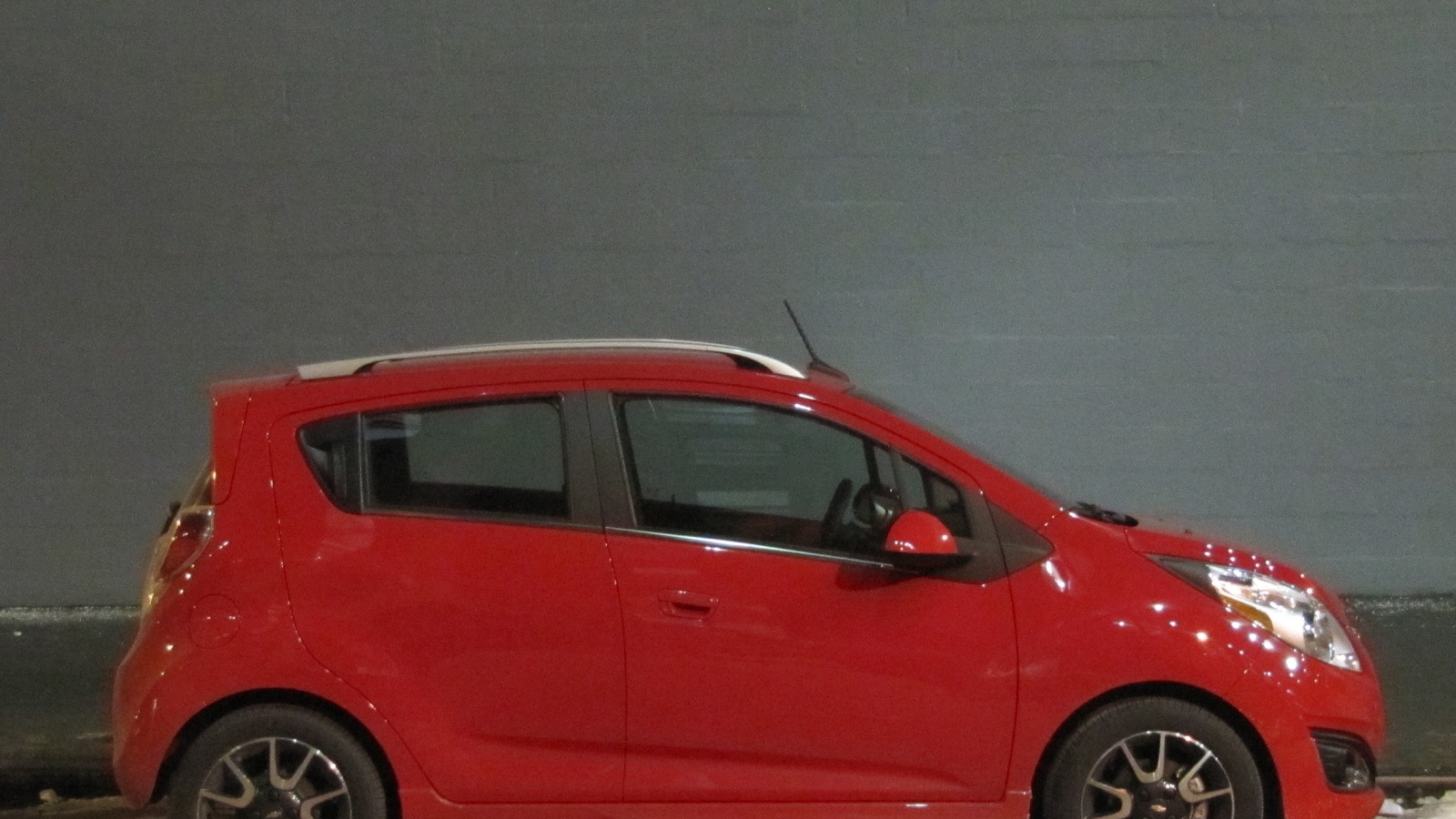 We tend to like small cars, as a personal preference.

But the very smallest of cars often don't get the best gas mileage, and they can feel subjectively unsafe in some driving conditions.

So how did our 2013 Chevrolet Spark minicar do on gas mileage?

We've concluded that--depending how you use it--it can deliver a genuine 35 mpg or more in mixed usage.

We spent the weekend with a bright red 2013 Spark, taking it on our usual 350-mile drive cycle that's about two-thirds freeway and one-third running around town and country roads.

Over that distance, we averaged 35.8 mpg (the photo was taken before a few miles of stop-and-go city traffic to return our test car to the General Motors garage).

That's quite good for a car that stickers below $16,000, offers four seats and four doors. Especially one that, with a 32.5-foot turning circle, may be the easiest thing to park this side of a Smart ForTwo or Scion iQ.

Our 2013 Spark weekend test car turned out to be identical to one we drove briefly in Los Angeles last month. Both were Salsa Red 2LT models, the highest of three trim levels.

Both had five-speed manual transmissions with their 84-horsepower, 1.2-liter four-cylinder engines--and were EPA-rated at 34 mpg combined (32 mpg city, 38 mpg highway).

But in LA, we put on just 40 miles, most of it in Southern California freeway traffic--meaning speed that varied at random from stop-and-go to 85 mph and back.

That's not good for gas mileage, and in that (quite unrepresentative) test, our Spark returned 30.6 mpg.

We think the 35.8 mpg over our longer, more mixed weekend test is a better approximation of real-world usage--though, as always, your mileage will vary.

The little Spark (it's only 12 feet long) felt fairly composed at Interstate speeds, although we found it the electric power steering more numb at high speeds than around town. The Spark required frequent course corrections, and was also susceptible to side winds.

But aside from its narrow cabin--which caused two adult men in winter coats to rub elbows--only a few things betrayed the fact that it's fully 14 inches shorter than the five-door Chevrolet Sonic subcompact hatchback.

The front passenger had to keep his left knee away from the shift lever, and there was only room for a single center armrest (on the driver's seat). When folded down, that armrest impedes access to the driver's belt receptacle and even the emergency brake.

A dangling key fob bounces off the driver's right knee. And the shift lever was sited a couple of inches further rearward than the driver might expect.

But one of the nice things about the Spark is that while it's narrow, it's tall--everyone sits up straight, meaning that you don't get the low-to-the-ground view out that makes some small cars feel smaller yet. From behind the wheel, the driver's position could be in a compact car.

The rear seats--just two of them, separated by a hard-plastic bin and cupholder built into the seat cushion--are suitable for adults, though front- and rear-seat passengers will have to bargain over legroom.

But we were impressed that the vast majority of the Spark's interior volume was devoted to people, at the expense of a rear load bay that might fit four to six grocery bags with the seat up--but not a lot else.

Chevy seems sufficiently worried about the Spark's small size that the company went to the extent of creating an infographic that compares the Spark to a 1973 full-size sedan.

We think the Spark is small, but quite sufficient for two people. And its opening rear doors make it way, way more practical for occasional third- and fourth-passenger use than the two-door Mini Cooper, Fiat 500, even if they do have "rear seats".

Reasonable minds may differ on that issue.

On the other hand, the Spark seems to be proving slightly more popular than Chevy had projected. The company said in October it has had to increase its Spark imports from Korea to meet the demand.

The Spark's low price came with a handful of oddities. For instance, unlike every other car we've tested over the last few years, the power locks didn't unlock when the key was pulled out of the ignition.

It's a simple thing, but it's now so intuitive that we spent the entire weekend trying to open the locked driver's door after yanking out the key--and then cursing, hitting the master lock switch, and trying again.

There is also no automatic-down on the driver's window, let alone automatic-up. Cost savings, we understand, but we really missed that one too.

On the other hand, Chevy has gone to the expense of providing an interior gas-door release. Many minicars simply require a simple push on the gas door.

And that gas tank only holds 9.2 gallons, meaning that even at about 35 mpg, we had to refuel before 300 miles were up.

For an inexpensive car, the Spark's 7-inch touchscreen display is impressive. Pairing a smartphone and streaming Pandora was simple, though we still haven't tested BringGo, the $50 app that runs on a smartphone to provide navigation and routing that's displayed on the screen.

The basic Spark LS model starts at $12,995 including delivery, but omits cruise control, the 7-inch touchscreen display, USB and Bluetooth connectivity, audio controls on the steering wheel, as well as power locks and mirros, floor mats, and even floor mats.

Our pair of identical Salsa Red 2013 Chevy Sparks were the high-end 2LT trim level, which adds 15-inch alloy wheels, fog lamps, a handful of exterior embellishments like chrome trim, and then inside, leatherette two-tone upholstery on heated front seats, plus a leather-wrapped steering wheel.

You can also order this model with a four-speed automatic transmission, which adds an additional $925. But don't do it. The manual is faster and far more rewarding to drive, and won't leave you nervously wondering if the car can accelerate fast enough to get out of the way of large trucks.

We learned that during our first drive of the 2013 Spark, in which we were assigned an automatic test car in the very, very noticeable Techno Pink color.

You'll like the manual better, we promise. The color, however, is entirely up to you.