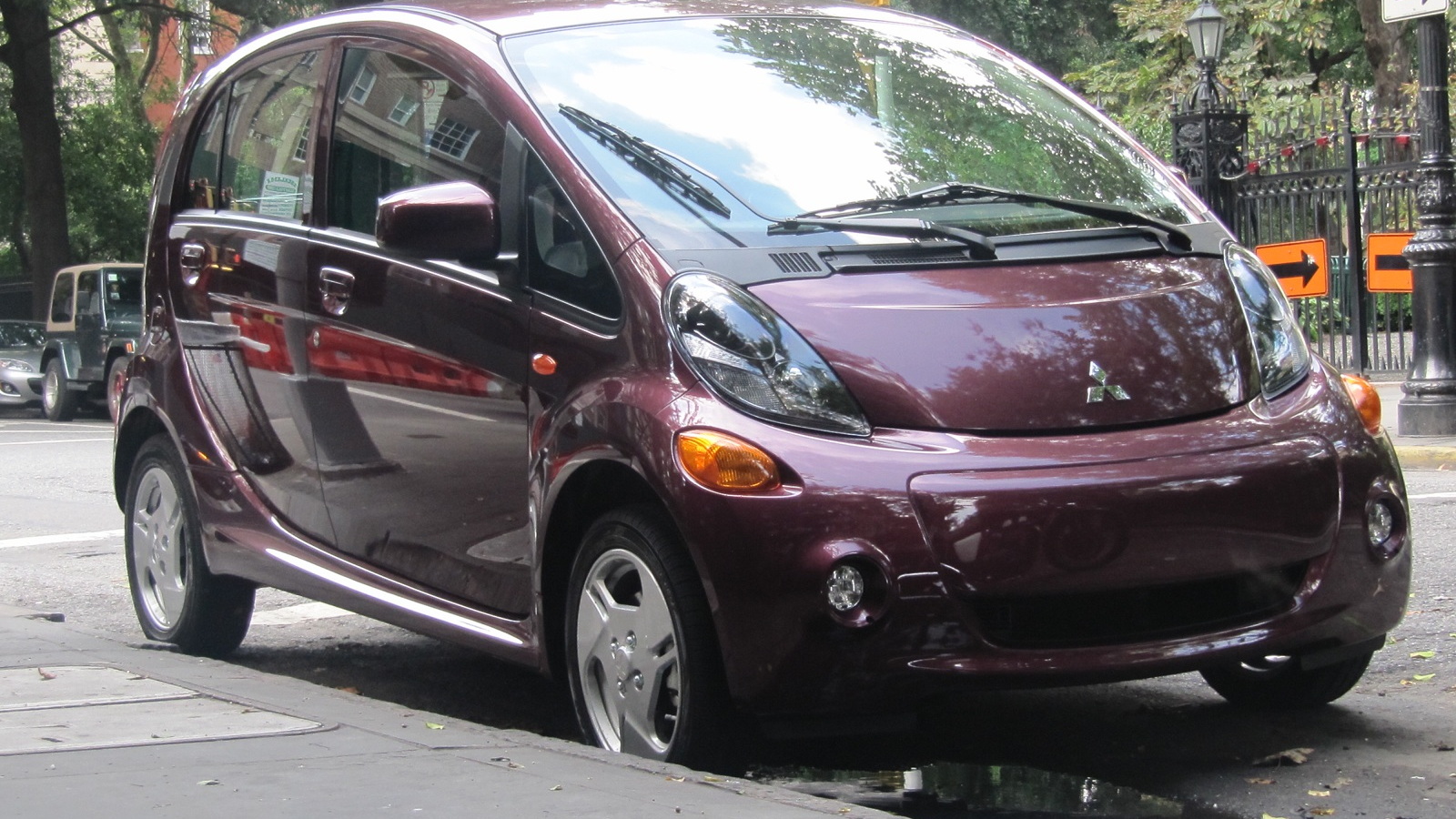 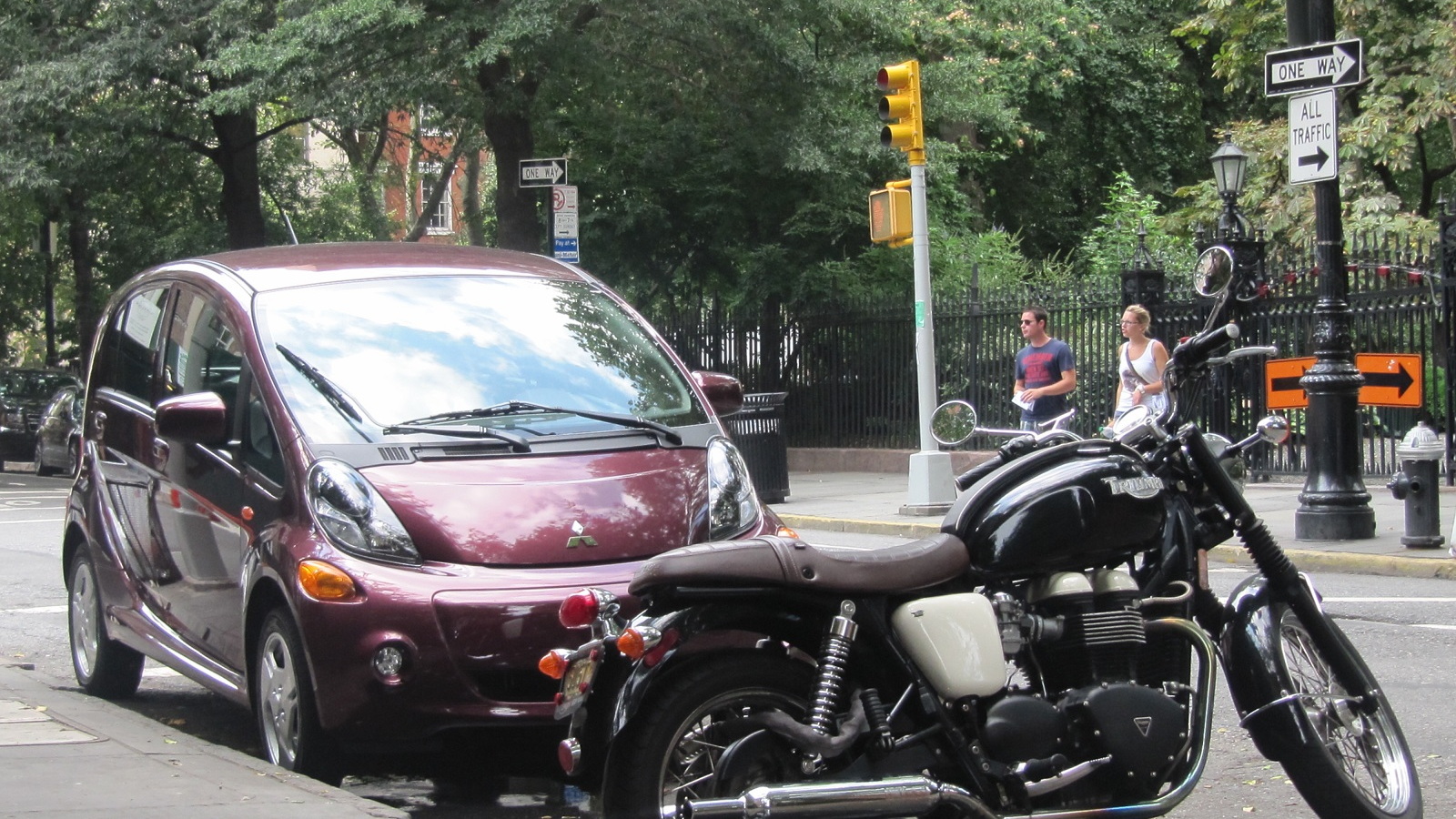 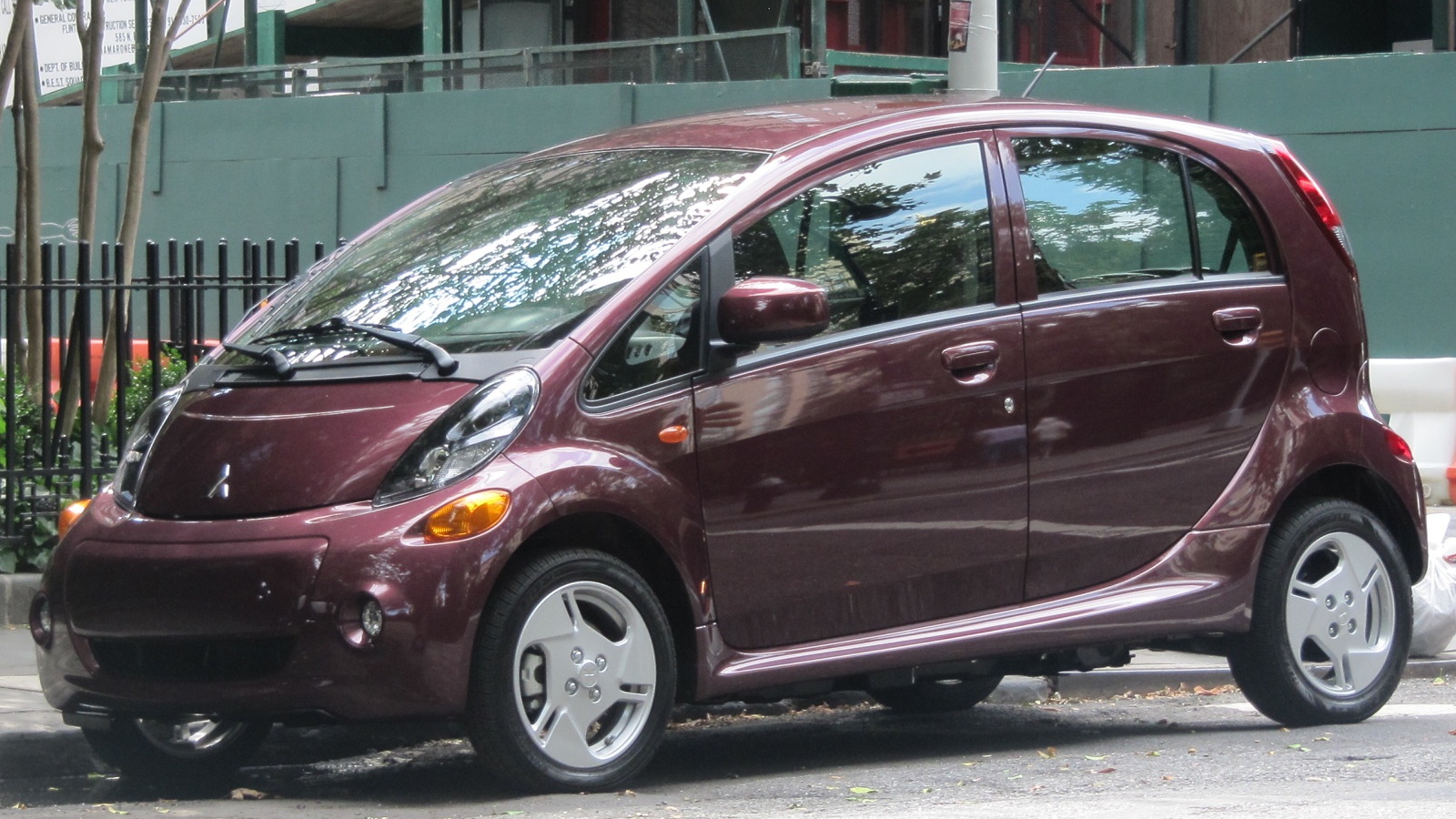 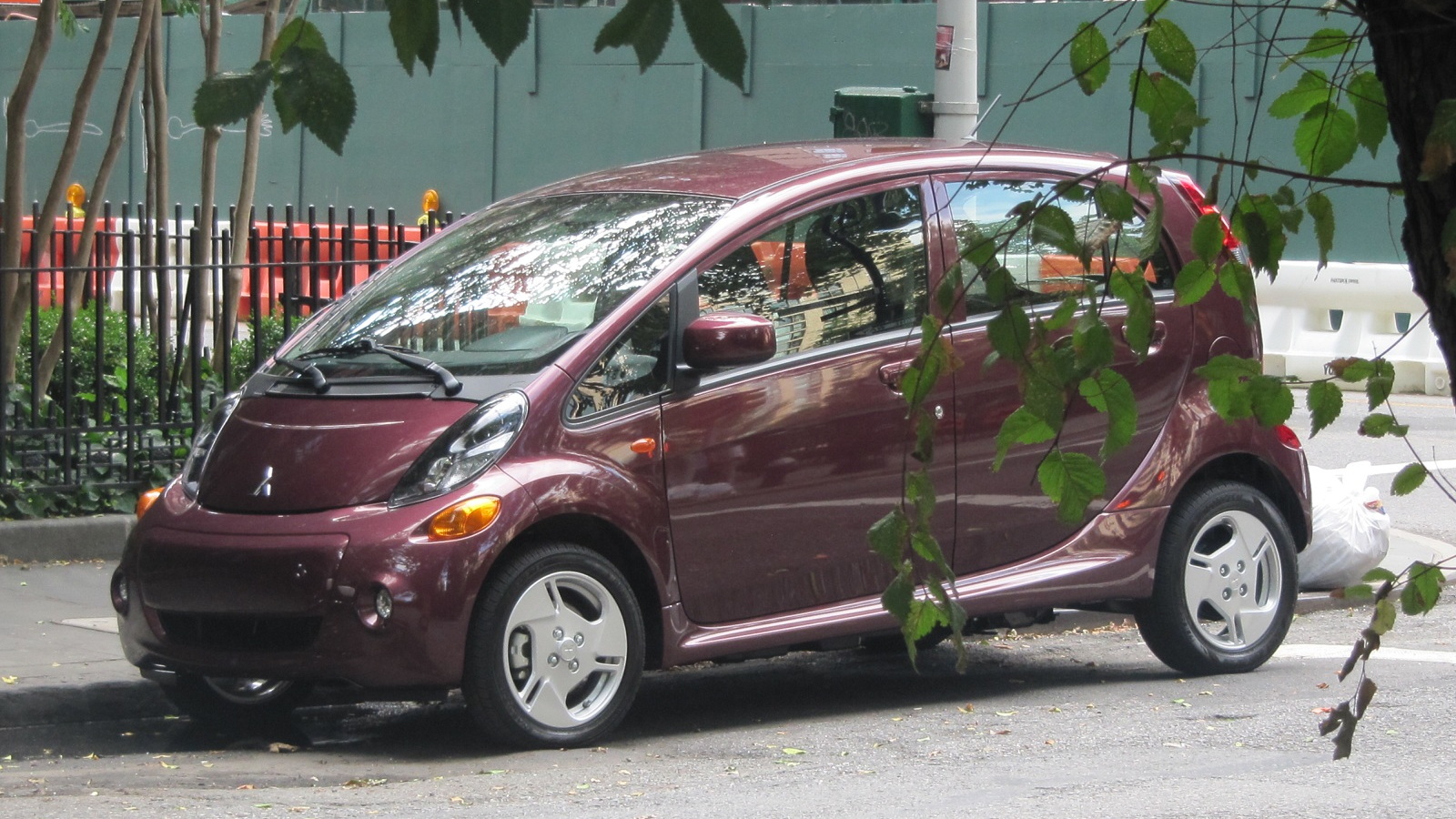 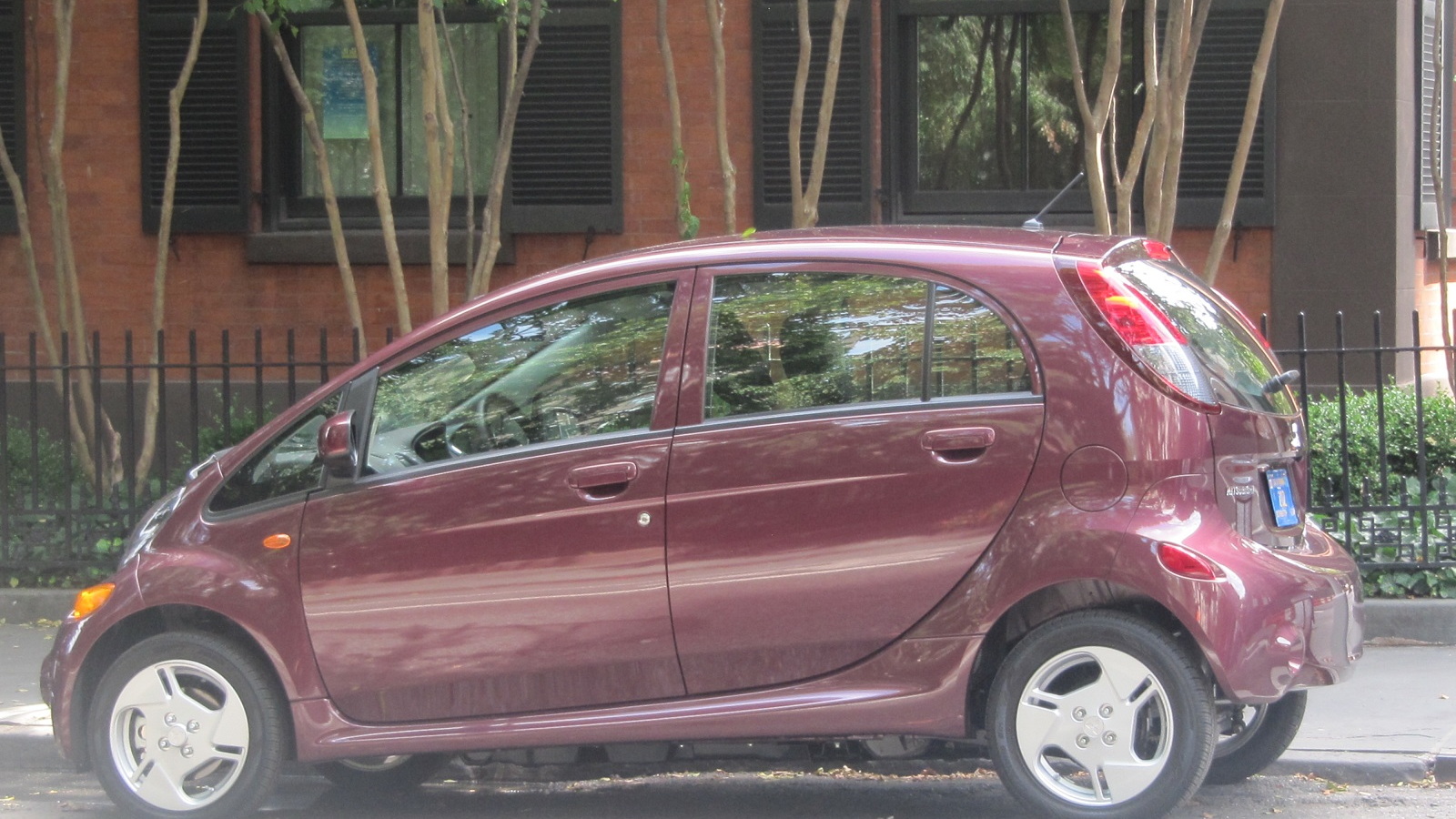 It took a while, but we've finally had a chance to spend time with the smallest plug-in electric car sold in the U.S.

The 2012 Mitsubishi i (also known as the i-MiEV) is a battery electric minicar roughly the size of a Mini Cooper. The little hatchback has four doors, four usable seats, and a lot more space inside than you'd imagine from its egg-shaped exterior.

While most i-MiEVs we've seen were white, our test car was a startling shade of Raspberry Metallic purple that led us to nickname it Professor Plum--and made it almost impossible to photograph in sunlight.

During our four-day test running errands and doing short trips in various boroughs of New York City, our longest journey was from lower Manhattan out to City Island, the nautical community in the Bronx that juts off Pelham Bay Park into Long Island Sound.

Our trip followed the tracks of Jerry Seinfeld, who covered the same route in a gorgeous silver-blue classic 1967 Austin-Healey 3000 sports car--with a frequently terrified Ricky Gervais riding shotgun--in the latest episode of his series, "Comedians In Cars Getting Coffee."

While many would say the little Mitsu is simply too small for comfortable use, we found it fine for running around town. It was easy to park, and its tiny 31-foot turning circle let us do U-turns in just two lanes.

The real challenge with the electric Mitsubishi is its range.

The EPA rates it at 62 miles, but that number--as we experienced during a spate of steamy 90-plus-degree weather in NYC--falls dramatically if you use the air conditioning and turn up the fan.

An indicated range of 58 miles with the AC off fell to 41 miles when it was turned on, and to 37 miles with the fan on High. We gained about 1 mile of range each time we lowered fan speed by one or two levels.

While we'd hoped to take it to Breezy Point in the Rockaways (25 miles each way), that seemed like pushing it if we needed to use the AC a lot. So we chose City Island instead, at 17 to 20 miles each way.

We settled for a compromise that mixed opening all the windows with closing them back up and using the lowest AC setting and the lowest fan speed. For two passengers in the front, that proved sufficient--barely--and it didn't cut range as much as cooling the entire cabin would have.

After a full night's recharge, the highest range we saw indicated was 69 miles.

And, to be fair, driving sensibly and letting the car coast down on regenerative braking seemed to stretch the range somewhat beyond the indicated number.

Starting with 58 miles of range, we covered 45.8 miles at a mix of city and freeway speeds, and finished with 16 miles remaining--meaning we'd gained almost 10 percent on the indicated range.

Traveling in the little i wasn't as basic as we'd feared. The two-tone brown and dark grey interior was pleasant, and the hard plastics looked good.

We missed having an armrest, and Mitsubishi could do better on providing space for phones, sunglasses, soda bottles, toll tickets, and all the other stuff you want to store on the console if there's room. The i has one cupholder, behind the parking brake lever, two door bins, and a recess at the front of the console--that's about it.

Vision out the rear window is largely blocked by the rear-seat headrests, which we immediately removed. That made it an easy car to use, with its vertical rear easy to place (the rear-view camera wasn't really needed) and the very short front contributing to ease of parking, even though you can't see it from the driver's seat.

On the freeway, the car showed its two worst traits: First, with the windows open (to save range), it's really, really noisy--more so than most cars.

More worrisome, at speeds above 50 mph, the car's suspension tuning just isn't capable of coping with some types of ripply pavement. With a little more than 1,000 miles on the odometer, New York City pavement surfaces made the car float and wander as if it had worn-out shocks.

That only occurred a few times, but it was the first time we felt unsure of ourselves in the little i. It's more usable even at speeds up to 65 mph than we'd expected--but range will start to dwindle visibly if you take it above 60 mph.

We also experienced an occasional rattle from some element of the interior trim, but it didn't happen often enough to be able to replicate. While lightweight and basic, the 2012 Mitsubishi electric car otherwise seemed pretty solid.

It's been a long time since we've driven a car with tires this narrow, though, and from certain angles--with the front wheels fully cranked in one direction, or from the rear--it does look undeniably like a tiny kit car.

In the end, we conclude that the 2012 Mitsubishi i would make a great urban car if your commute is 20 miles or less. It's going to be cheap to run--a complete battery recharge giving you up to 60 miles is only about 14 kilowatt-hours, or 30 cents to $3 of electricity (depending on where you live).

The acceleration is decent, if not Tesla-quick, and we can think of few cars that have as much space wrapped into such a small package. (MINI could learn a lot from how the i is laid out.)

But the electric Mitsubishi is severely limited by its range. If its battery pack offered half again as much range--93 miles, say--we think it could find huge acceptance as a large-inside, small-outside practical second car.

So while we liked it, we would have liked it a lot better if we could have driven it to Breezy Point.

Our test car was fitted with the $2,790 Premium Package that includes an in-dash navigation system with real-time traffic data, a 40-GB music server, Bluetooth hands-free audio and phone pairing, steering-wheel audio controls, heated side mirrors, a rear-view camera, and a battery warming system.

It was also fitted with a Quick-Charge port, although as there are no CHAdeMO quick-charging stations in the greater New York City area, we couldn't test it.

The total price of our 2012 Mitsubishi i SE, with the Premium Package and a mandatory $850 destination charge, was $34,765. The car qualifies for the $7,500 Federal tax credit for buying an electric vehicle.