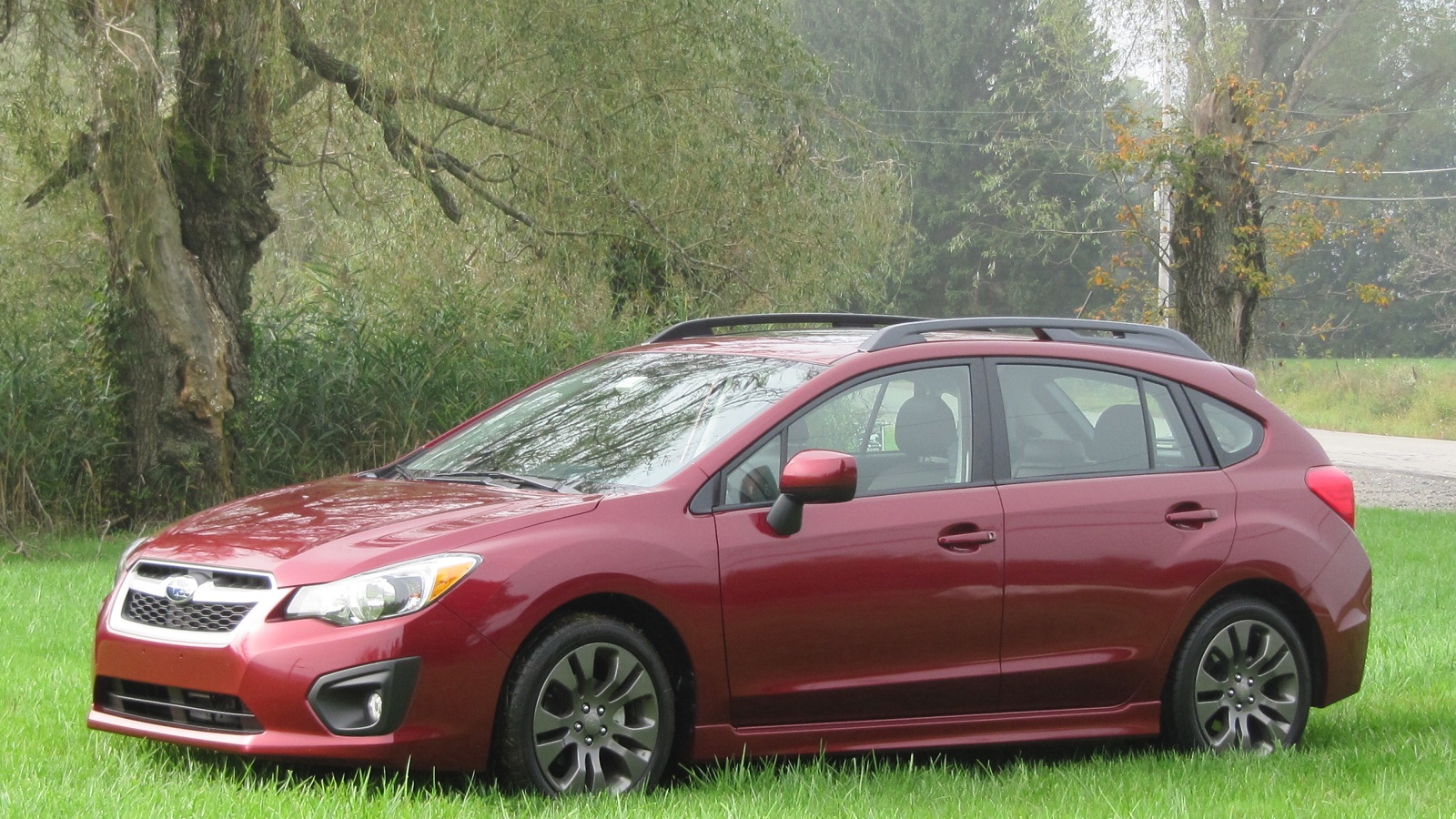 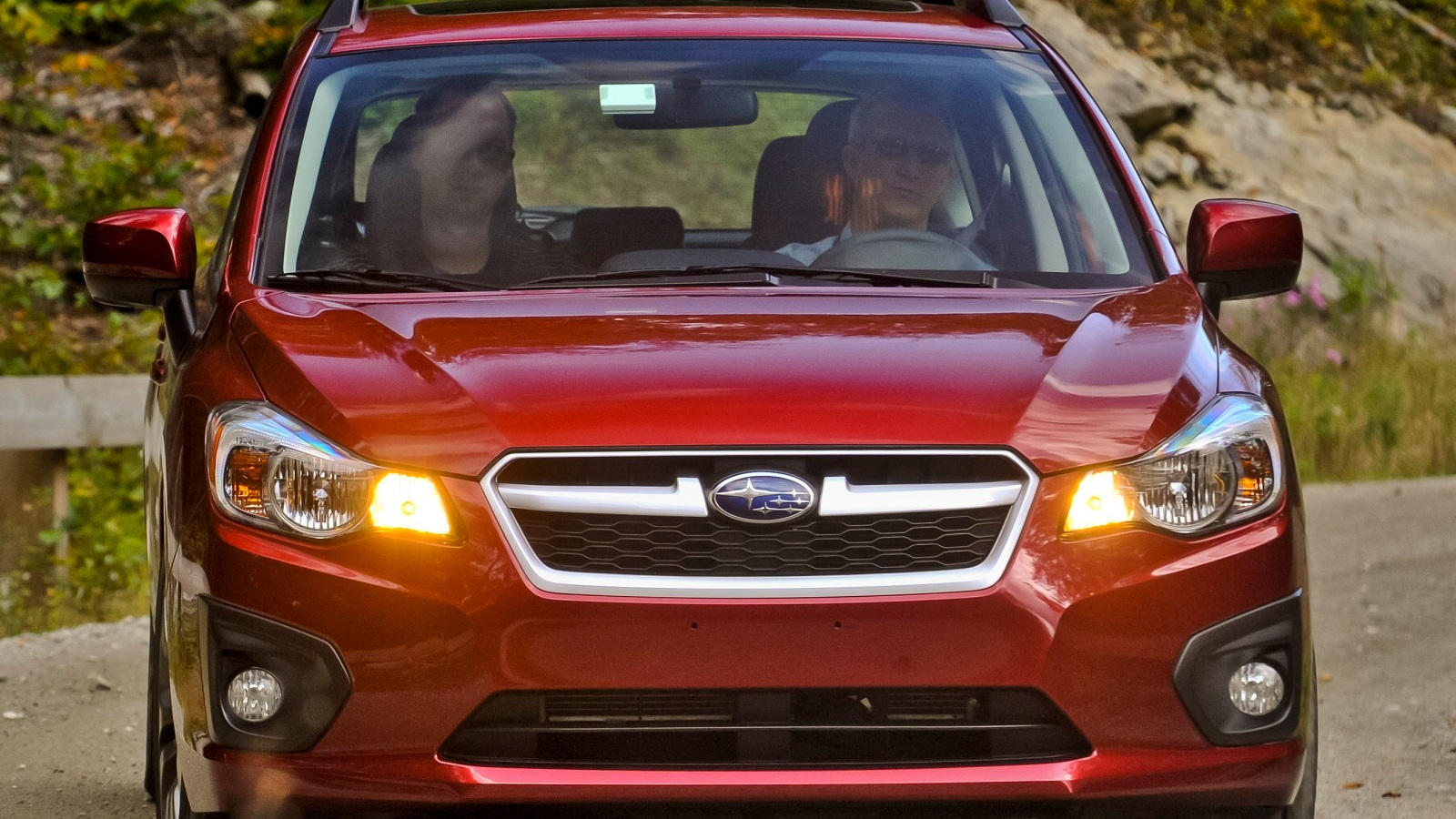 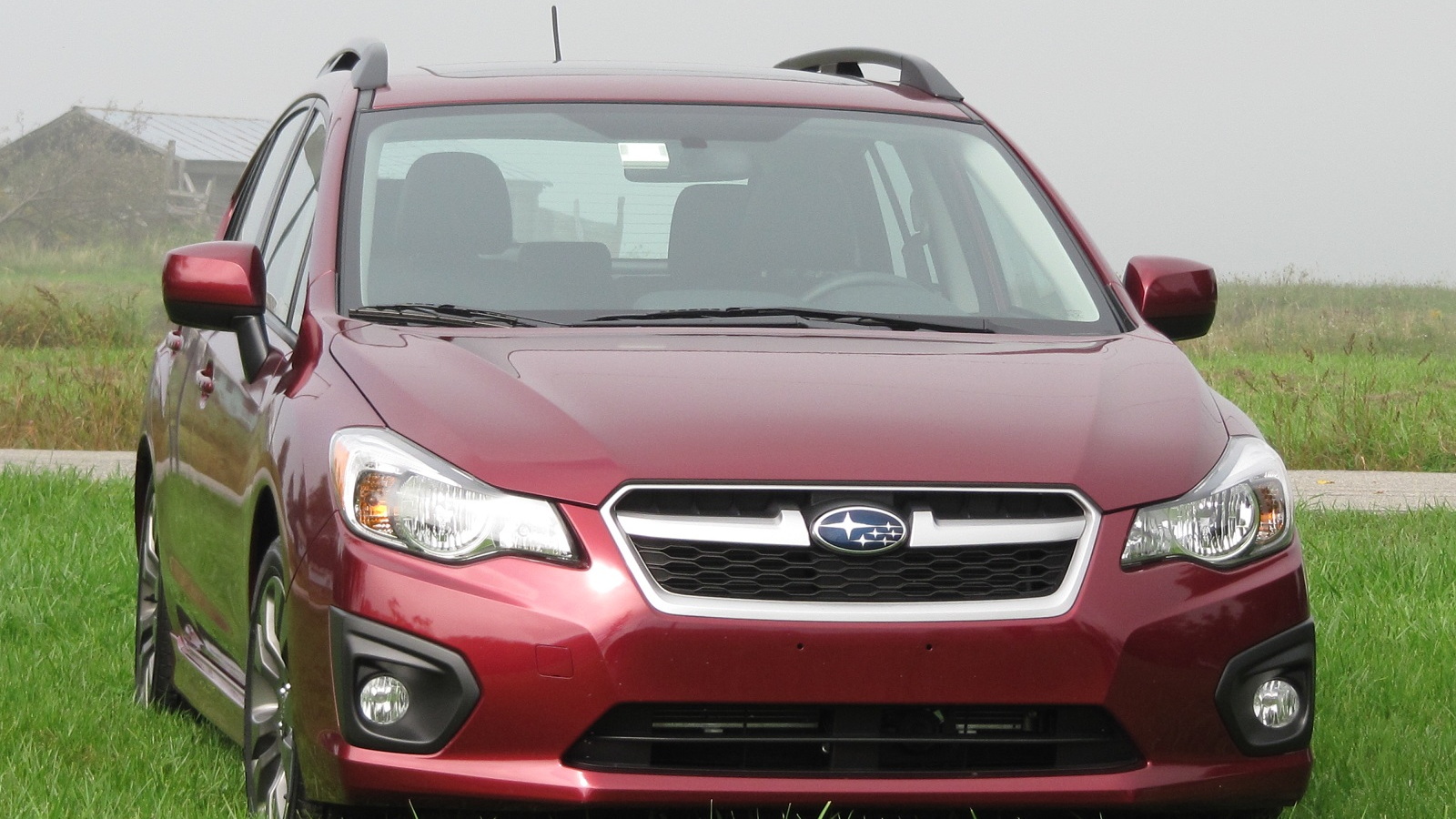 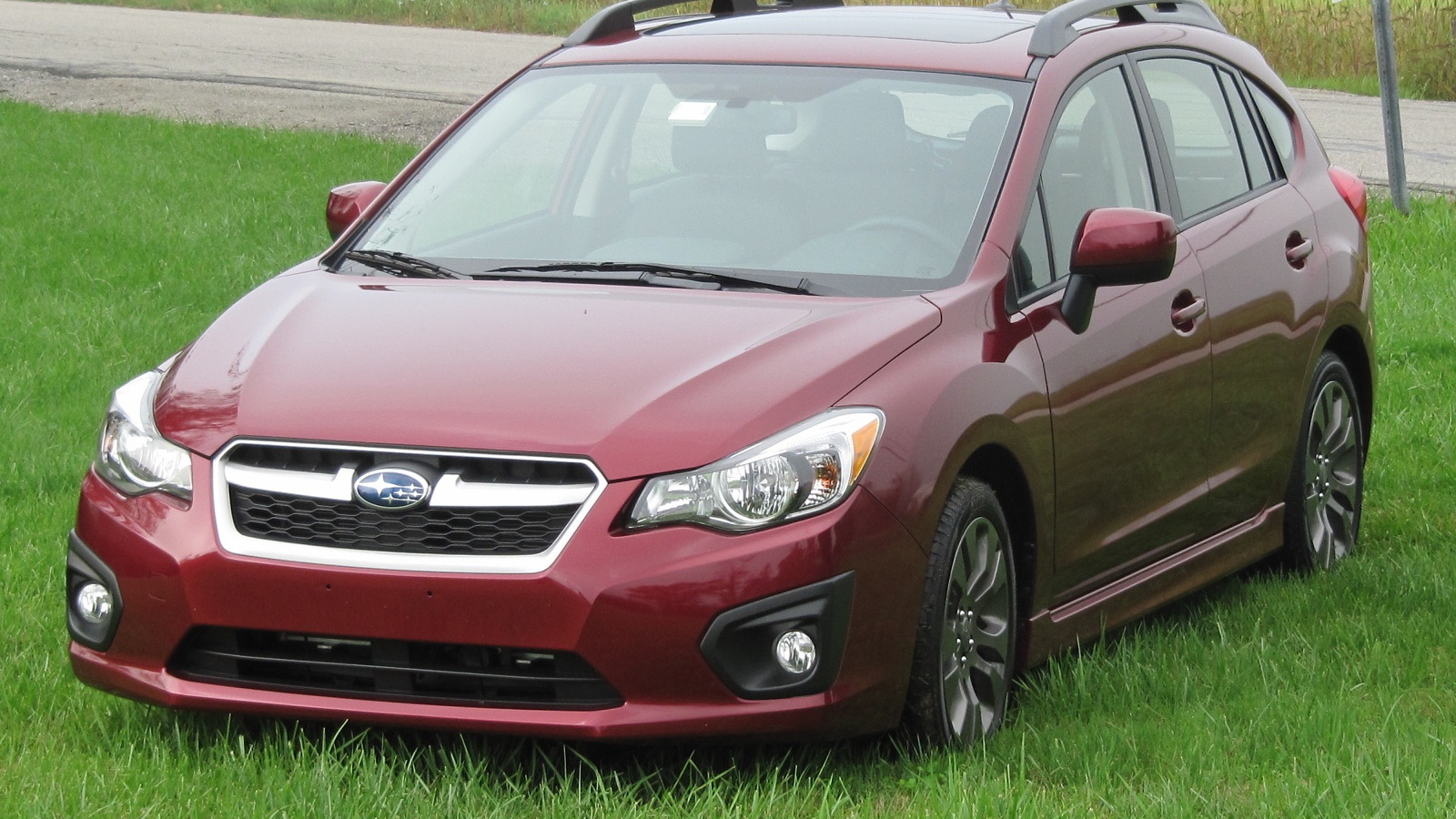 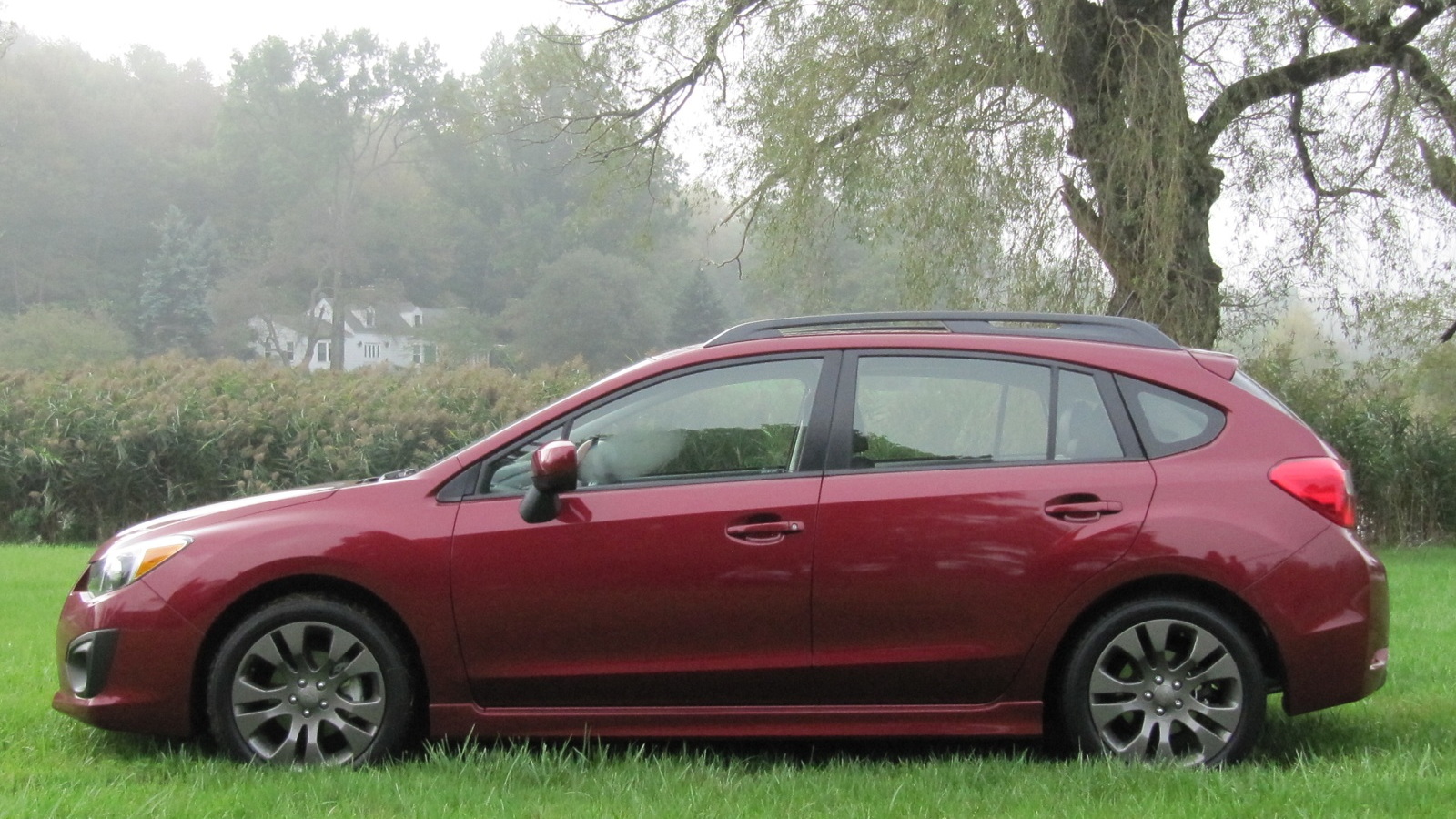 Subaru is known for its no-nonsense, durable, all-wheel drive Forester and Outback crossover utility vehicles. What U.S. buyers don't seem to know is that the company also makes compact sedans and hatchbacks.

For 2012, Subaru has restyled its Impreza compact, increasing interior space while keeping overall length and width the same, lightened it, and fitted it with an all-new engine and the Impreza’s first continuously variable transmission (CVT).

The new engine and transmission combine with a weight reduction of 110 pounds to improve gas mileage considerably over the previous model. While the 2012 Impreza's 30-mpg combined rating is hardly the highest among compacts, it’s the highest figure for any all-wheel drive gasoline car sold in the States.

The company hopes the all-new 2012 Subaru Impreza will make it more of a player in the world of compact cars that get good gas mileage--with the added Subaru twist of standard all-wheel drive. The new model will compete most directly against the Mazda Mazda3 and the Volkswagen Jetta, on the sportier end of the compact spectrum.

The 2012 Subaru Impreza was designed from the outset to have more appealing lines than the previous model, which launched a number of new styling cues, not all of them successfully.

Subaru says outright that styling was one of two reasons shoppers turned their backs on the last-generation Impreza (the other was its gas mileage). And the company redesigned every panel of the new car to improve it.

At the front, the new Impreza returns to the traditional and recognizable trapezoidal Subaru grille and "hawkeye" headlamps. The 2012 model is no longer than its predecessor, but the wheelbase has been lengthened by 1 inch, shortening the overhangs. The windshield is more steeply raked, and the hood is shorter. 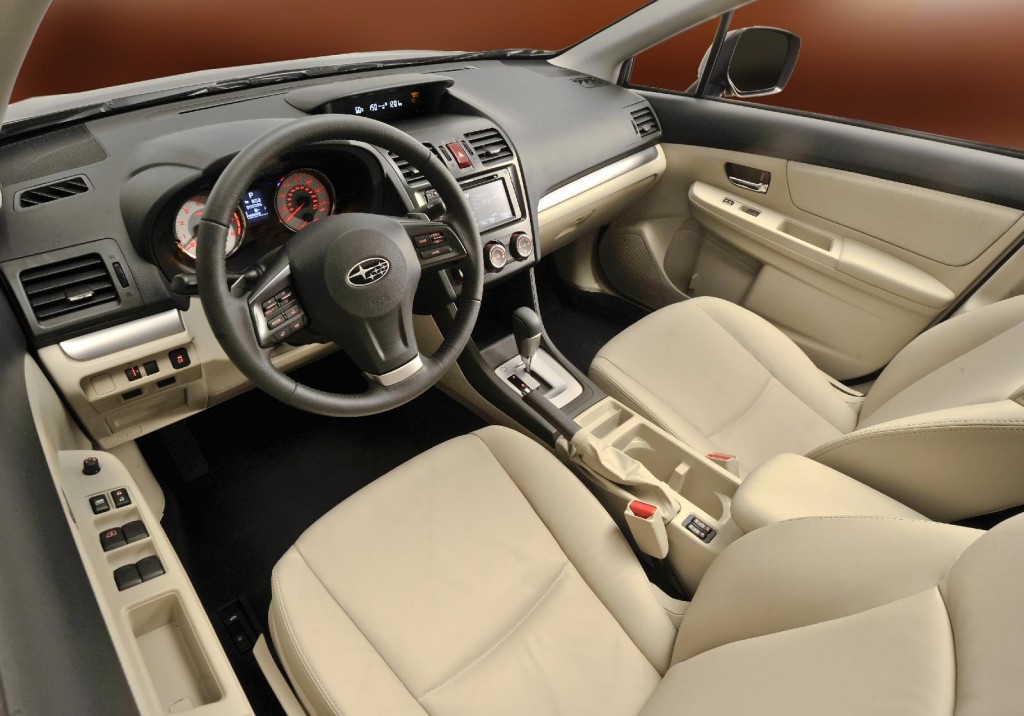 The window "shoulder line" has also been lowered by more than 2 inches, increasing light in the cabin and making the 2012 Impreza less slab-sided. We think the overall effect is positive, though we kept seeing echoes of other cars in aspects of the Impreza: a Chevy Cruze cut-line for the hood, a bit of Dodge Caliber in the rear quarters.

Inside, Subaru has kept its simple cockpit design, but improved the materials quality.

The 2012 Subaru Impreza gets an all-new 148-horsepower, 2.0-liter flat-four engine, smaller than the last model's 2.5-liter but making roughly the same power. The new engine is only the third in Subaru's history, and it produces about the same power from 20 percent less displacement than the 2.5-liter engine it replaces.

With gas mileage being the other reason shoppers passed over the last Impreza, the boost in anticipated EPA figures will be welcome news for shoppers.

The company expects EPA ratings of 27 mpg city, 36 mpg highway for the 2012 Impreza when fitted with the Lineartronic CVT, which gives a combined 30-mpg number. Buyers who opt for the five-speed manual suffer slightly, with the combined number falling to 28 mpg.

That's a 30-percent improvement on last year's figures, which were 22 mpg combined for both the old four-speed automatic and the five-speed manual versions. Cherry-picking its data slightly, Subaru points out that the combined figure is better than both the subcompact Mazda2 and the Fiat 500 minicar fitted with an automatic.

(Combined ratings for the STI hot-rod model, which retains the old body and engine, remain at 21 and 19 mpg depending on transmission.) 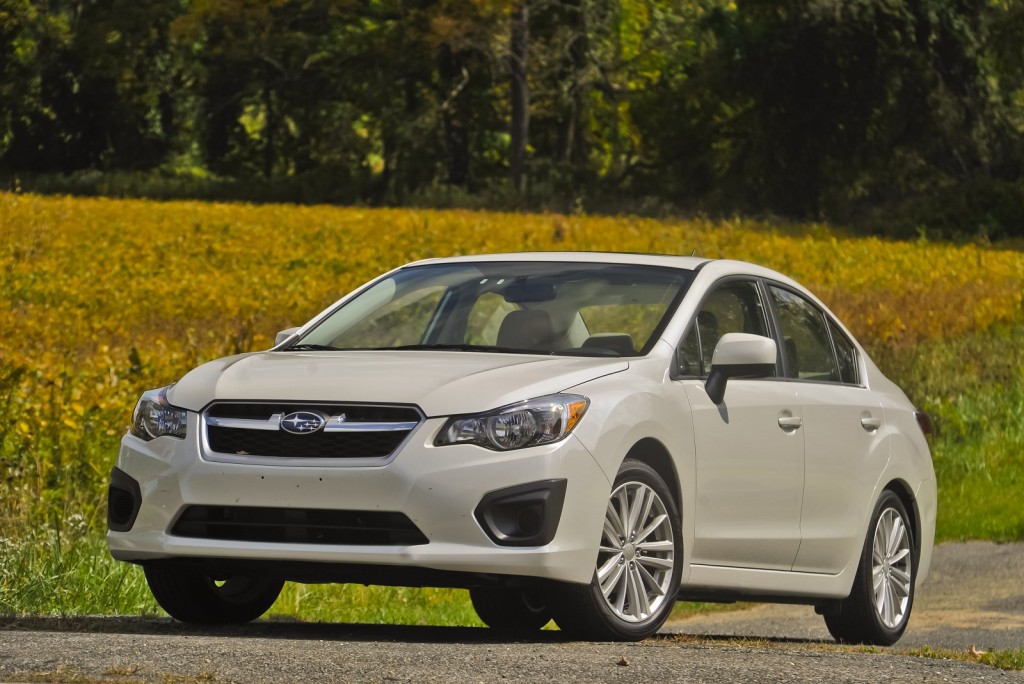 The 2012 Subaru Impreza is clean enough to qualify as a Partial Zero-Emission Vehicle, or P-ZEV, for the first time. Some carmakers offer PZEV vehicles only in states that follow California’s stricter emissions standards, but Subaru offers it in all 50 states—complete with a “PZEV” badge, which includes a green leaf, on the trunk lid or hatch.

Not a rocketship, but entertaining

The 2012 Impreza is hardly a rocketship (that's the STI's role), with 0-to-60-mph acceleration of 9.6 seconds, but it moves away from stoplights smartly enough after a slight transmission lag. Subaru says it's faster from a standing start to 20 mph, and also in the crucial 50-to-70-mph passing range.

We didn’t drive a five-speed Impreza, but the CVT is less obtrusive than similar transmissions from other makers. There’s an optional “six-speed manual mode” available that provides paddle shifters for drivers to “downshift” to increase engine speed ahead of passing maneuvers. 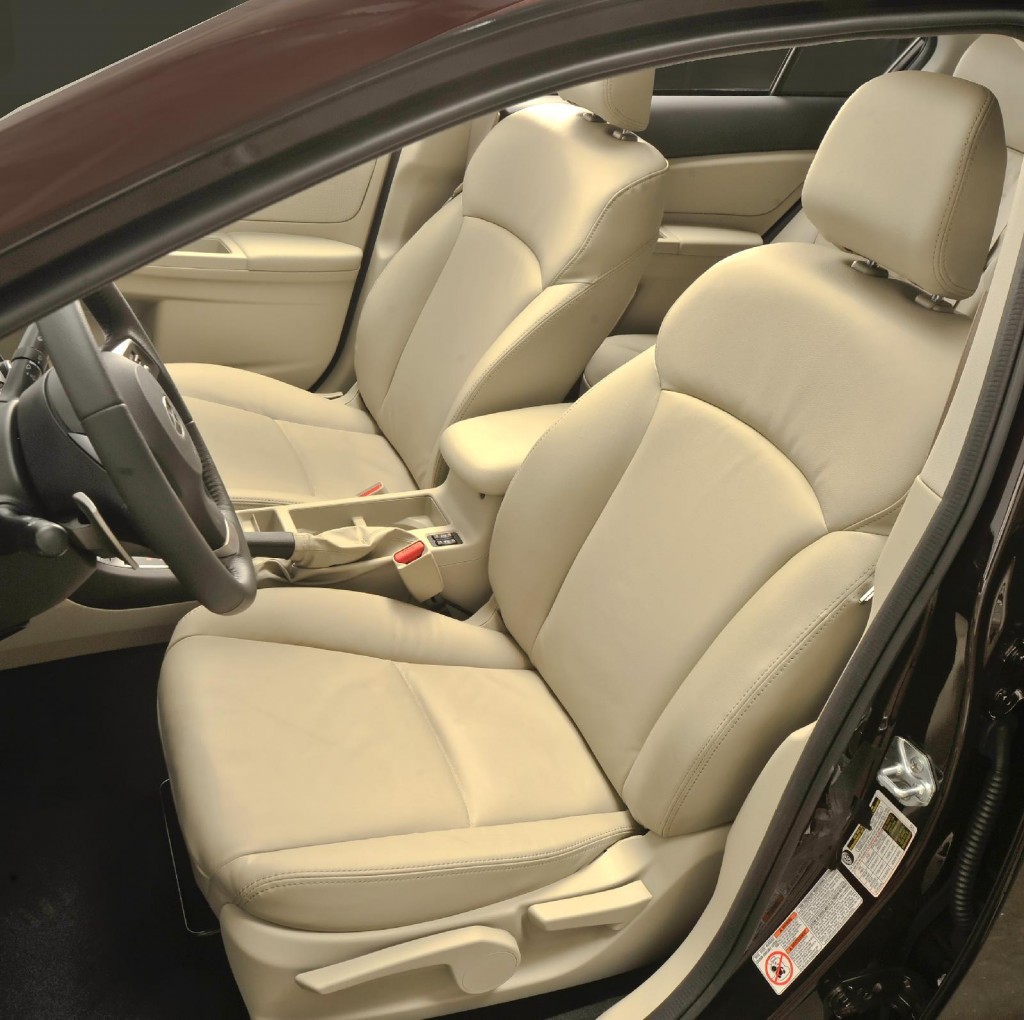 Only under hard sustained acceleration up to the 6500-rpm red line does the Impreza strain, with the engine whine increasing in volume and not all that much to show for it. There's not a lot of spare power, and using the shift paddles that simulate "downshifts" is the way to hustle it around.

One quirk: CVT-equipped Imprezas are programmed to provide simulated engine braking when the car is heading downhill. It's a good feature, keeping the car at a steady speed rather than allowing it to gain 10 mph or more without the driver noticing. But it comes on abruptly and noticeably, to the point where it almost feels like a mechanical problem.

The all-wheel drive 2012 Impreza's handling is laudably drama-free, with utterly neutral cornering behavior. it neither understeers like a front-wheel drive car nor kicks the rear end out as rear-wheel drive cars sometimes do.

Instead, the car stays poised, with body roll contained and virtually none of the wallow found in other compacts. Keep the power on, and the Impreza just goes where you point it, with deceptively good roadholding--the car hangs on and simply does what the driver wants.

Subaru's new electric power steering has much better road feel and feedback than similar systems in mass-market brands like Chevrolet or Toyota. As on all Subarus, the new Impreza's brakes have long travel and engage progressively. We prefer that approach to the hair-trigger braking feel on some other cars we've driven.

For the 2012 Impreza, Subaru's engineers made a concerted effort to improve the practical aspects of the car. That means a wider, taller rear hatch opening, allowing a medium-size dog crate to fit in. Subaru even scalloped the headliner to allow two mountain bikes, minus their front wheels, to stand upright in the hatchback. 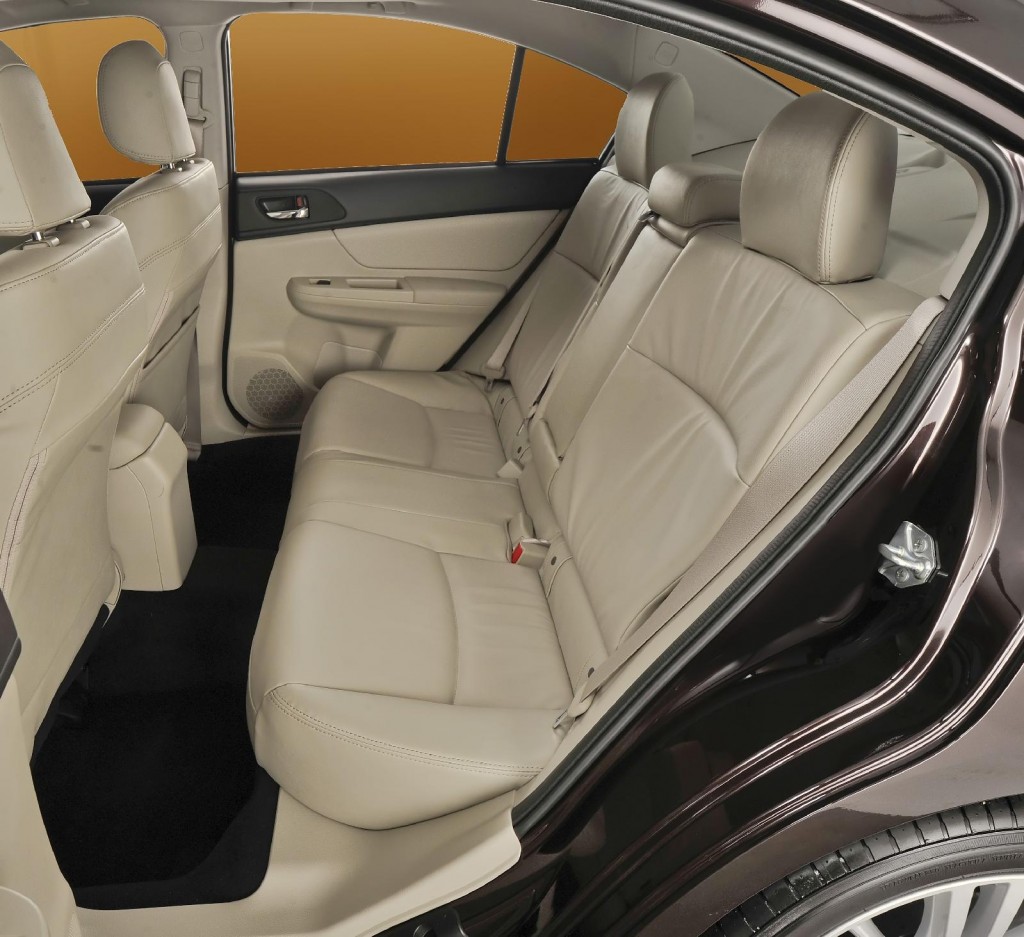 The boost in gas mileage ratings gives the 2012 Impreza a substantial cruising range of 523 miles, up 67 miles over the previous model. And that's despite a smaller gas tank, which allows a totally flat load floor in both body styles with the rear seat folded down despite the presence of a rear differential underneath.

The front seats are comfortable, and the lowered window line opens up and brightens the interior. The longer wheelbase gives 2 more inches of rear legroom, which along with redesigned concave front-seat backs, allows six-foot adults to sit comfortably in the rear seats. Larger rear door openings make getting in and out easier as well.

Inside, the new cockpit sports much nicer materials than the previous hard plastic. Soft-touch surfaces are prevalent, and the hard plastic that remains is nicely textured so it's not clear which is which. A few aspects of the interior still look cheap, though, including the flat silver plastic shift-lever and radio surrounds.

The front compartment offers plenty of places to store mobile phones, sunglasses, bills and change for tolls, and so forth. The glovebox is large as well. 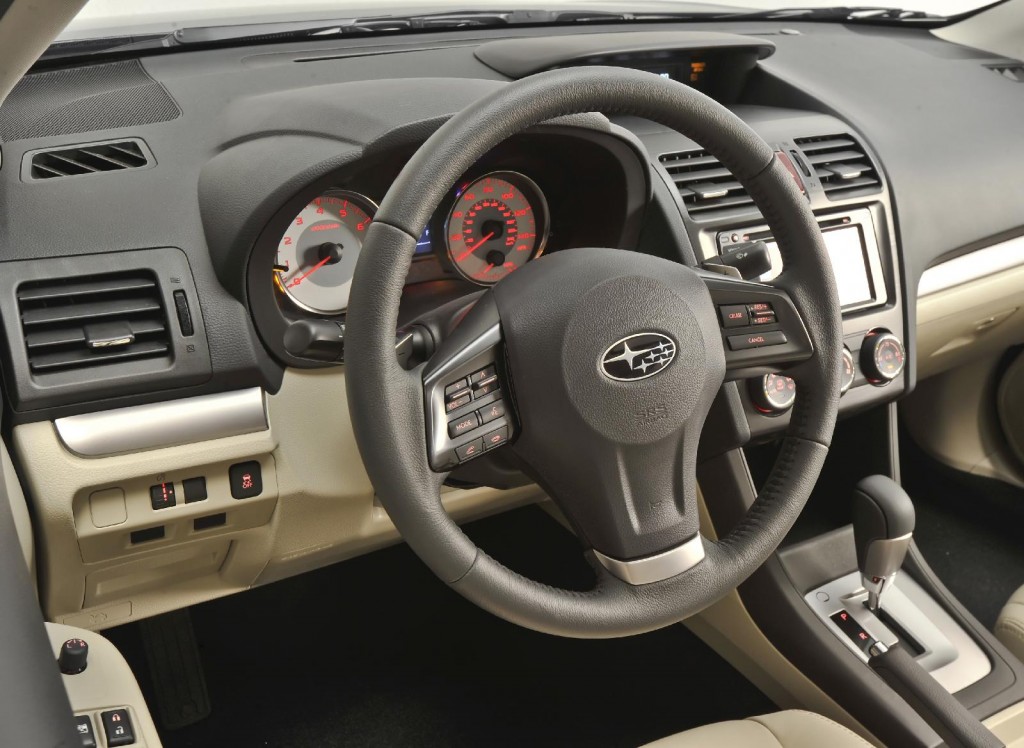 The 2012 Subaru Impreza isn't the quietest compact on the road--that honor goes to the Chevy Cruze sedan--but it's refined enough under most circumstances. We noticed both door-mirror noise and, on some pavement surfaces, roar from the low-rolling resistance tires.

While the 2012 Subaru Impreza hasn't yet been tested by either the Insurance Institute for Highway Safety (IIHS) or the National Highway Traffic Safety Administration (NHTSA), the company says it's confident that the Impreza will receive top ratings for crash safety.

The new Impreza comes with a new driver-side knee airbag. Brake override--which cuts engine power if both the brake and accelerator are pressed--is standard as well, as is traction control for the all-wheel drive system, along with the usual array of antilock brakes, tire-pressure warning sensors, and so forth. 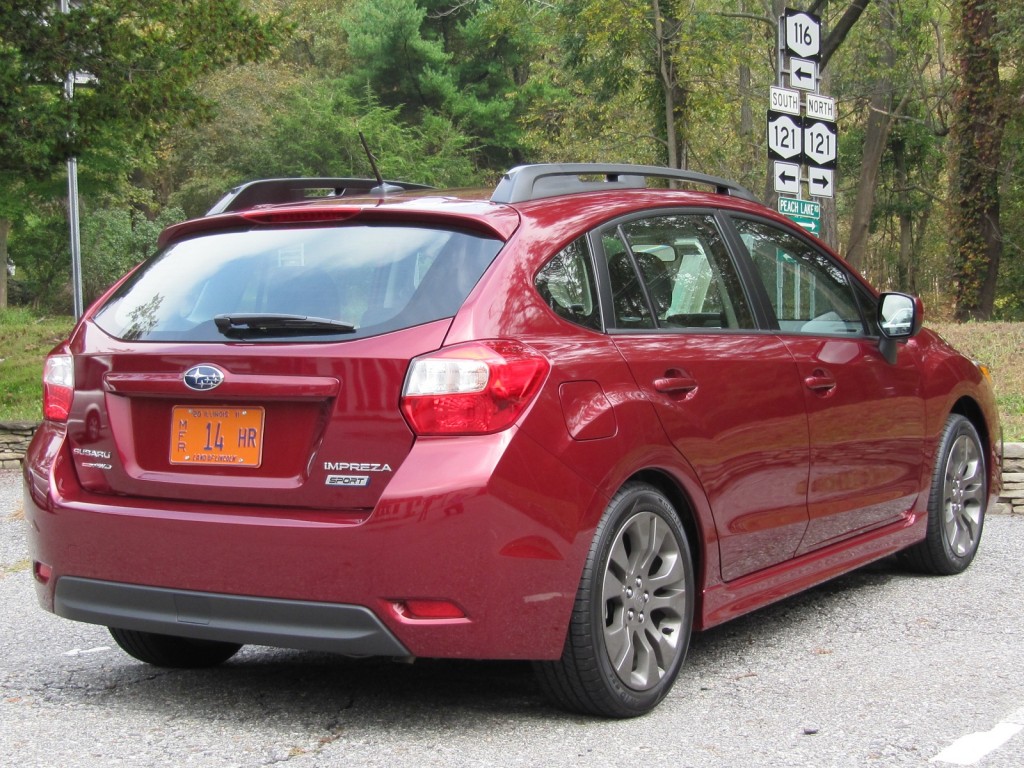 Visibility from inside the car is good, giving an adequate view of traffic to the rear over the driver's right shoulder. Subaru has slimmed its windshield pillars to improve outward vision, for which we laud them. We wish more manufacturers would follow suit.

The company has also enlarged its door-mounted rear-view mirrors by 20 percent, which give as good a view as any we've seen on compact cars. The downside is noticeable wind noise from around the mirrors and windshield pillars, which seems to be a perpetual Subaru issue.

But given Subaru's good safety record, one design feature shocked us. To cycle through the options in the information display between the instruments, the driver must reach through the steering wheel to the right-hand stalk protruding from the cluster (like an odometer-reset stalk).

It's awkward, distracting, and potentially dangerous, and we've seen it nowhere else. On most cars, drivers can cycle through display options using a button on the steering wheel or a switch on one of the stalks at the side of the wheel--which lets the driver's hands stay on the wheel.

The least expensive 2012 Impreza model is the 2.0i sedan with a five-speed manual, with a base price of $18,245 including a mandatory $750 destination fee. It includes air conditioning, power windows and locks, and 12-Volt power outlets.

Across all trim levels, the five-door hatchback costs $500 more than the four-door sedan; Subaru expects to sell slightly more hachbacks than sedans, but hopes to increase awareness of the sedan option. 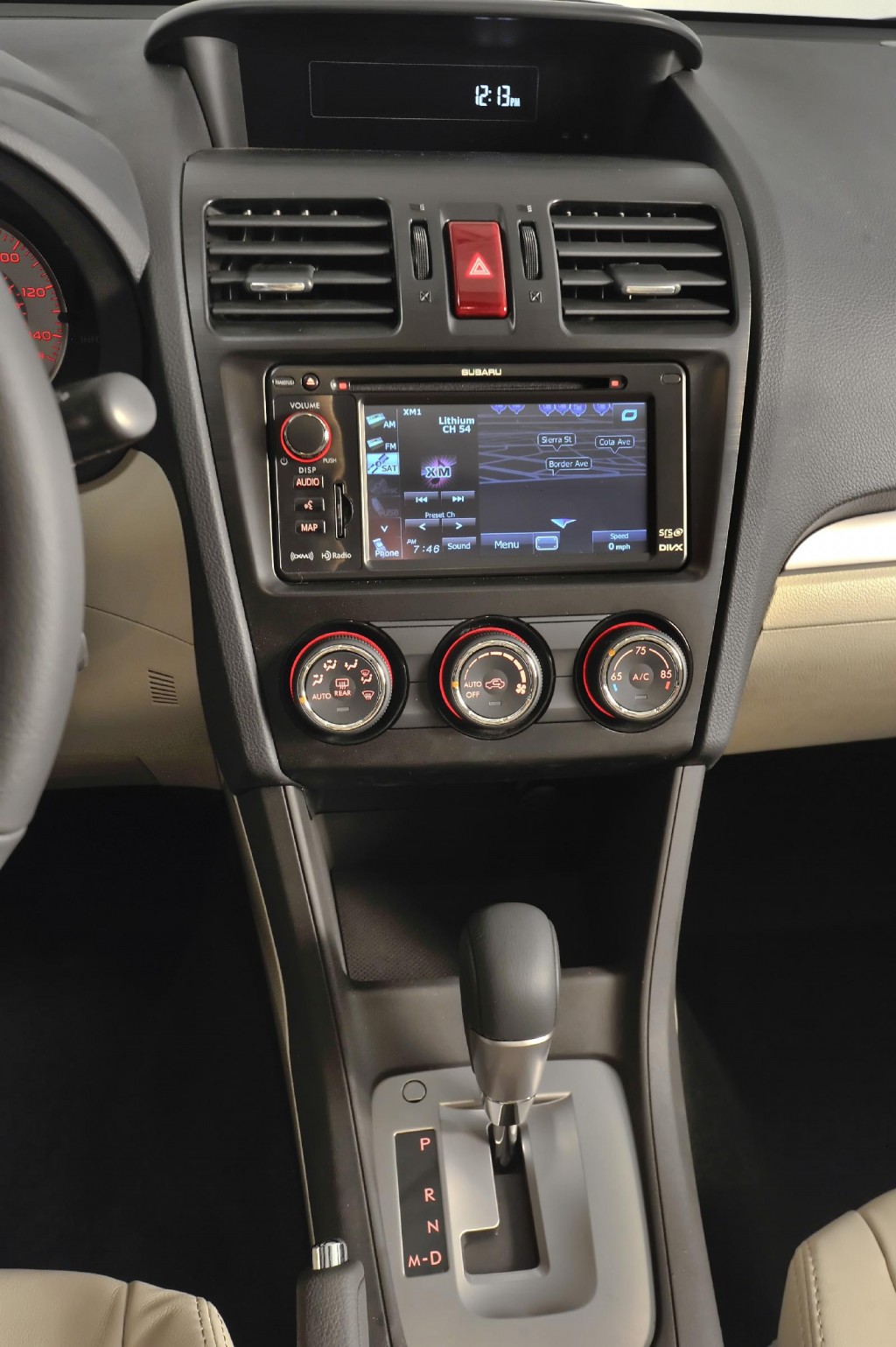 For 2012, the company has added more high-end options to the Impreza line, as buyers prove to be willing to spend more on smaller cars to make them nicer.

The 2012 Subaru Impreza Sport Limited hatchback we drove was close to the top of the line, fitted with the CVT and a handful of options. The price was $22,595, plus $2,000 for the moonroof and navigation package, along with the destination fee giving a bottom line of $25,345.

Subaru offers four radio options: standard, premium, a Display Radio with a 4.3-inch monochome screen, and at the top of the line, a Navigation Radio with a 6.1-inch LCD display screen. We found the in-radio navigation screen crisper and more vivid than might be expected from its display size.

The top-of-the-line sound system includes one USB port, a standard audio jack, and two 12-Volt power outlets--though the USB and auxiliary ports aren't fitted to the base car.

As the pictures show, the Camelia Red Pearl paint makes the little hatchback particularly fetching (in our opinion). The new Impreza should arrive at Subaru dealers during November.

Subaru provided lodging and meals so High Gear Media could bring you this first-person drive report.