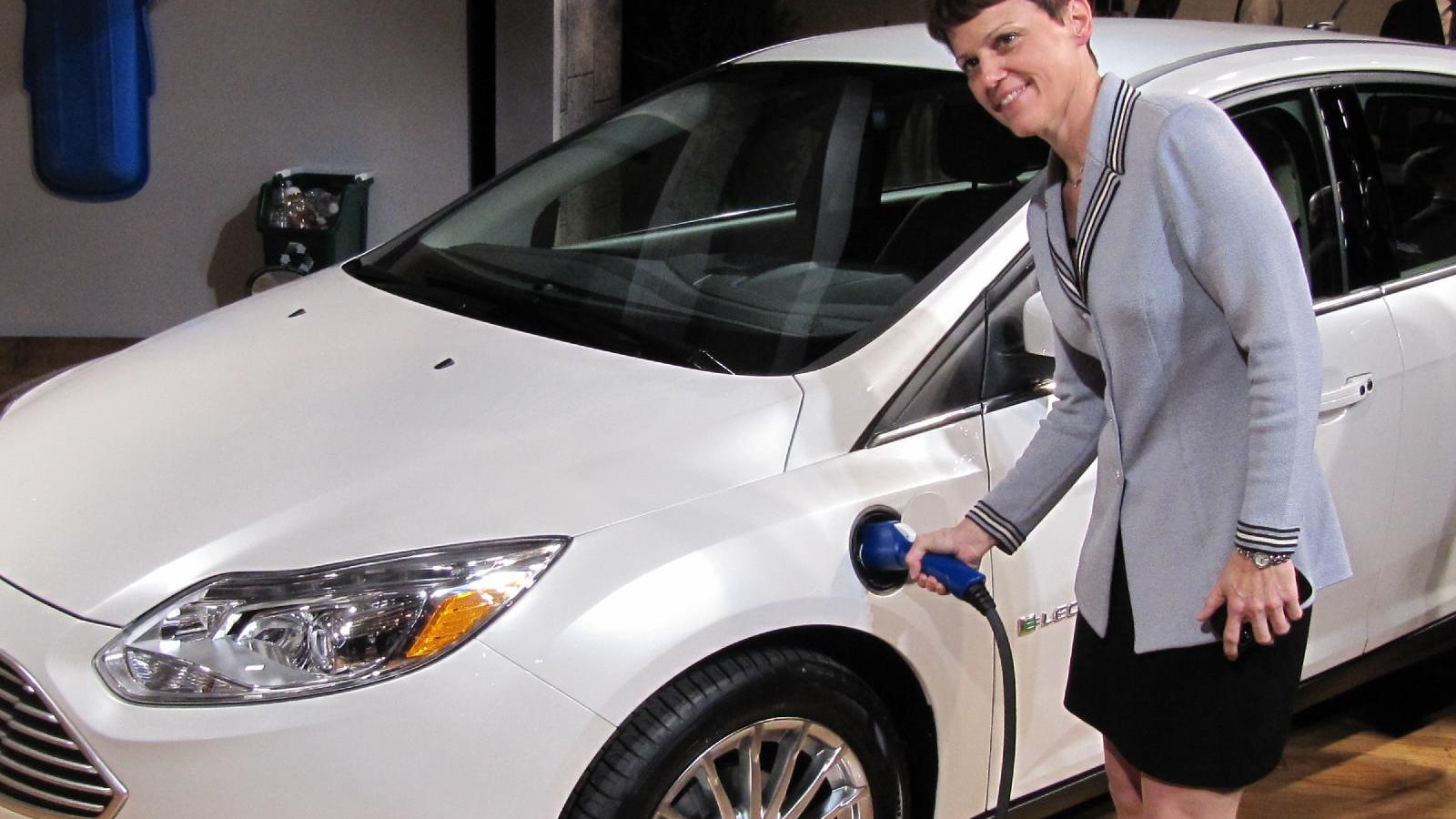 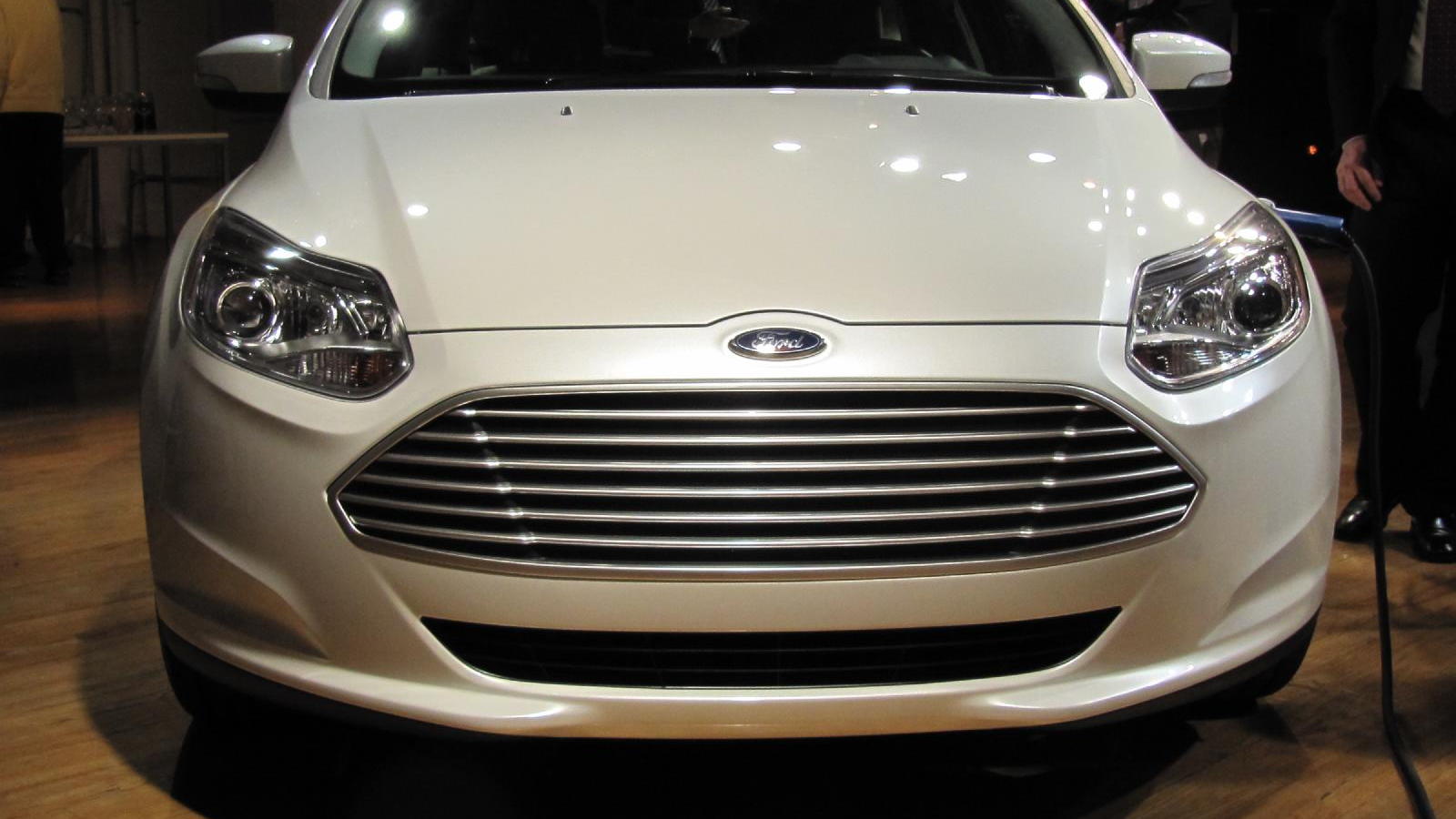 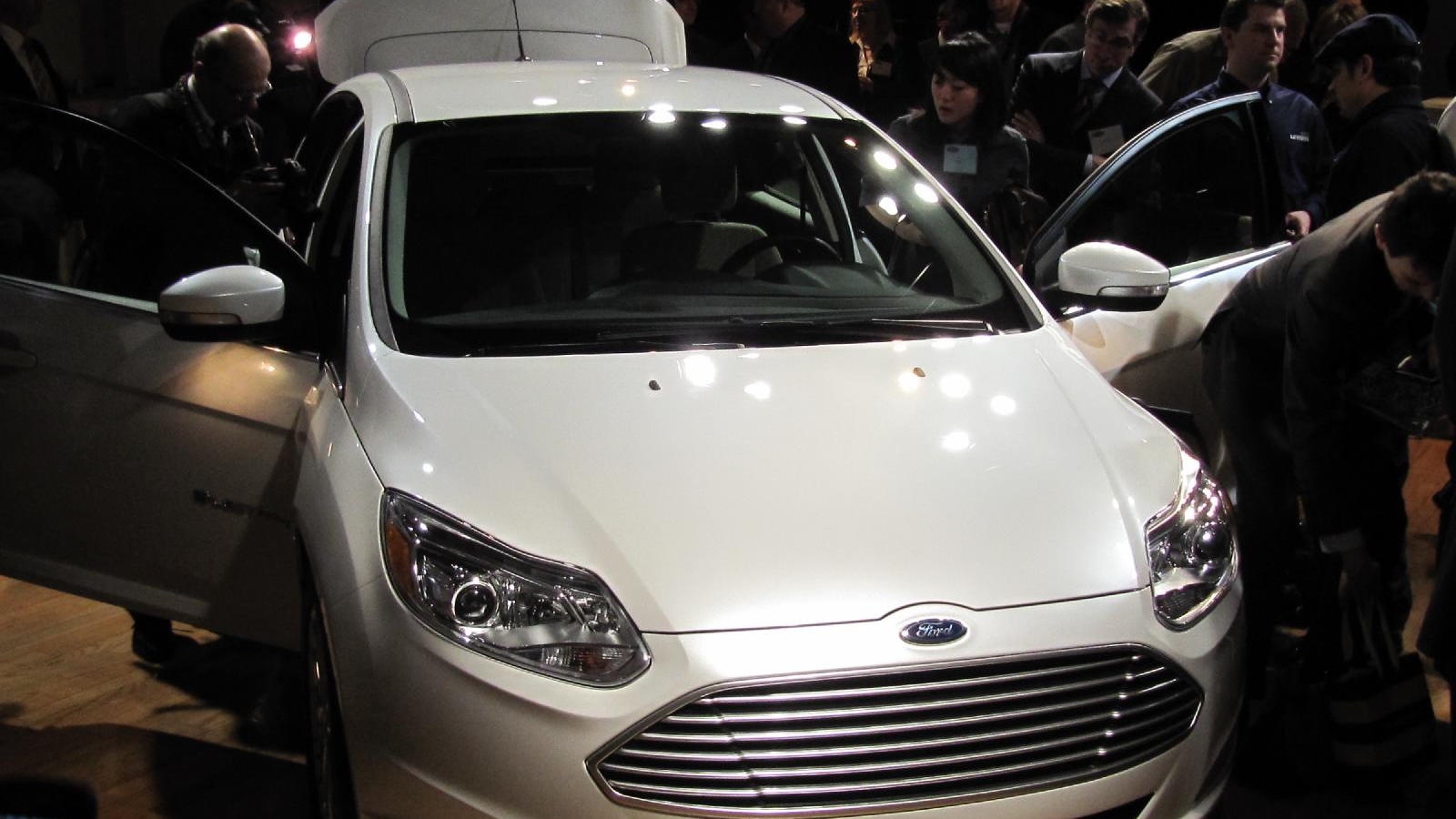 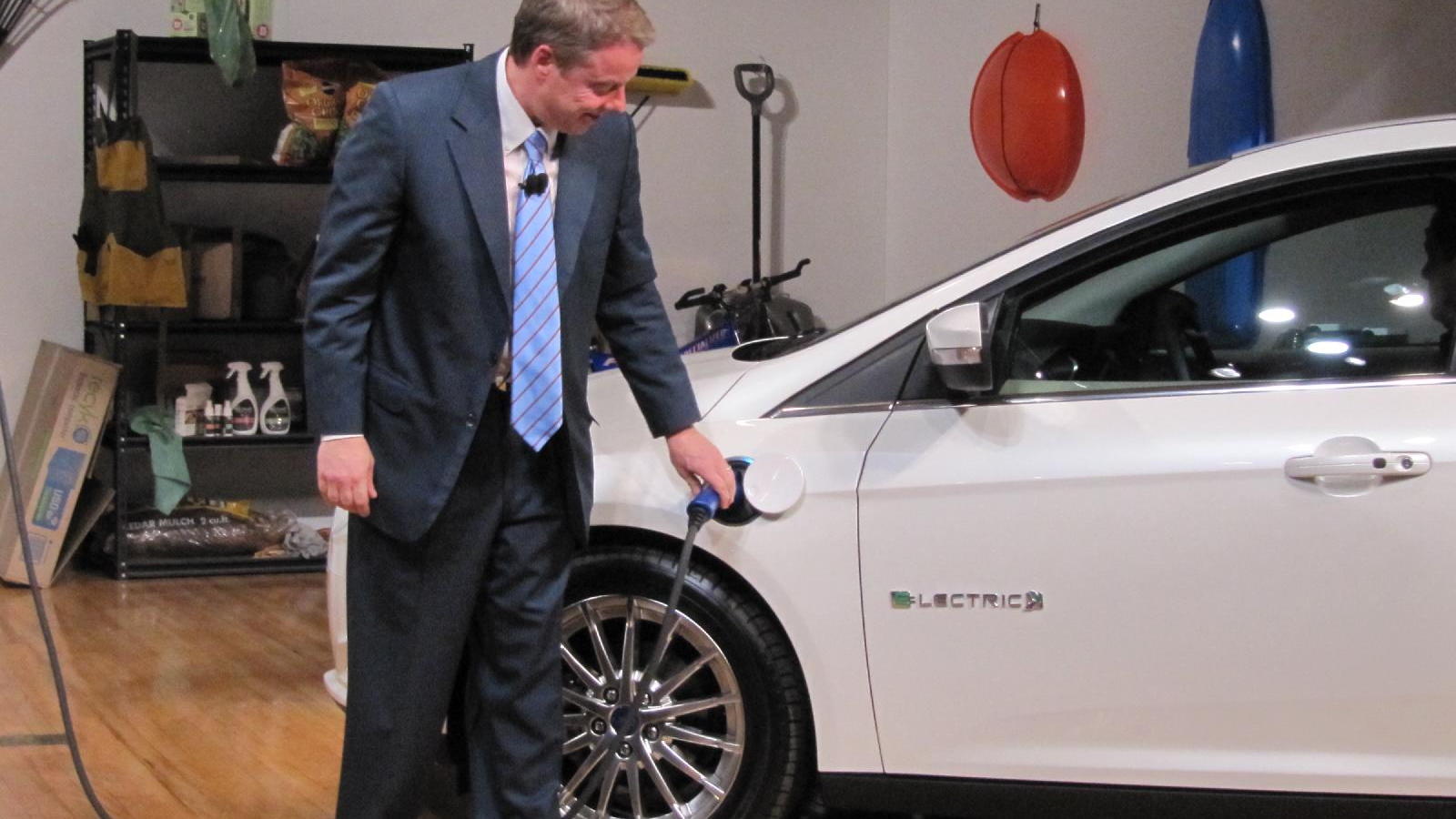 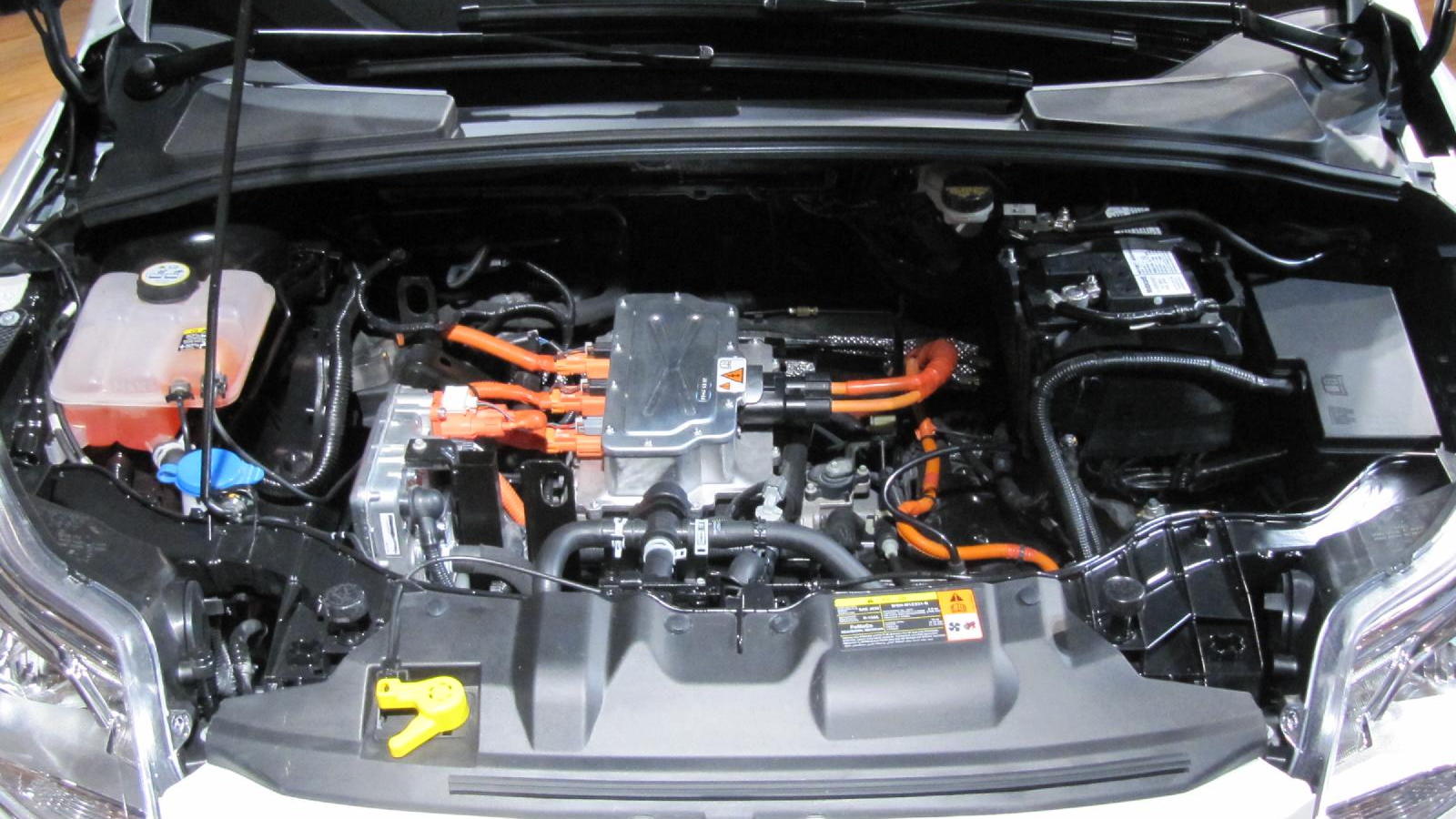 As you may have seen by now, the 2012 Ford Focus Electric was officially launched today at the Consumer Electronics Show in Las Vegas by Ford CEO Alan Mulally.

At the very same time, another notable executive--Bill Ford--unveiled it in New York City. He covered the same production details that were presented at CES, but with a specific spin.

You have to admit, it's not every day that the man whose name is on the nose introduces a car he calls "a game-changing technology" for the company's second century.

Some notable points from a quick, and very crowded, inspection of the 2012 Focus Electric:

BODY STYLE: Ford chose to use its five-door hatchback body style, perhaps so that Europeans would be more inclined to buy the car, since the compact sedans that U.S. buyers favor are rare there. European buyers prefer hatchbacks.

LOAD BAY: But that leads to a challenging compromise: A portion of the car's 23-kilowatt-hour battery pack occupies a high, wide, transverse box between the wheel wells, drastically impinging on load space. While the rear seats still fold down, the flat-floored load bay that makes a hatchback so practical is a thing of the past. 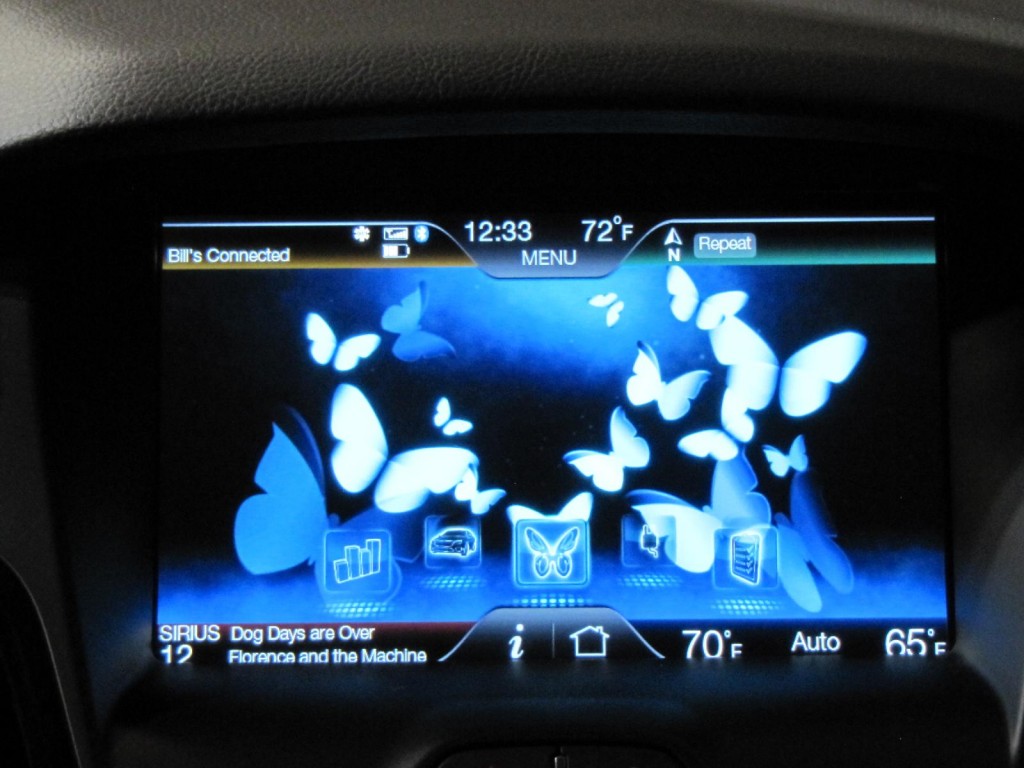 STYLING: The grille and front fascia of the Focus Electric are quite distinct from those of gasoline Focus models, not to mention the charging port on the left front fender. Aside from that, it looks just like any other Focus. And the "grille" is actually a stylish gridded blanking plate that doesn't appear to admit any air to the area formerly known as an engine compartment.

CHARGING: Ford is proud of the fact that a full recharge of the 23-kilowatt-hour battery pack takes only 3 to 4 hours, due to the car's 6.6-kilowatt internal charger. That's more than twice as fast as a full recharge for the Nissan Leaf's pack of the same size; the Leaf recharges at only 3.3 kilowatts.

HOME CHARGING STATION: Ford is also proud that it presently offers the only home charger that isn't hard-wired into the house or garage wiring. Instead, it plugs into a 240-Volt socket and attaches to the wall on brackets, meaning that the homeowner can take the charger to a new location if needed. Ford also said the full cost--including installation by Best Buy's Geek Squad--would cost only $1,499, a savings of up to $700 over the chargers offered by Chevrolet and Nissan.

However, beyond these talking points, Ford executives were notably unrevealing about many details of the car. They provided few useful answers to any of the followup questions posed by reporters or securities analysts in attendance. For instance:

TIMING: "Before the end of the year," in more than a dozen launch markets previously identified. On further questioning, that probably means sometime between October 1 and December 31 this year.

BATTERY: While Ford executive Eric Kuehn declined to provide any specifics about the cells used in the liquid-cooled battery pack, earlier reports indicate that Ford is using lithium-ion cells from LG Chem. That's the same company that provides cells for the 2011 Chevrolet Volt, so it may be that Ford is piggybacking on the considerable development and validation effort expended by General Motors during its Volt development.

Nonetheless, the 2012 Ford Focus Electric promises to be an important addition to the plug-in vehicles entering the U.S. market during 2011 and 2012.

It should pose formidable competition to the battery electric Nissan Leaf, and complement the Chevy Volt in underscoring Detroit's renewed commitment to green and zero-emissions vehicles.

And we have to admit, the glowing charging port on the left front fender is an undeniably gee-whiz feature. 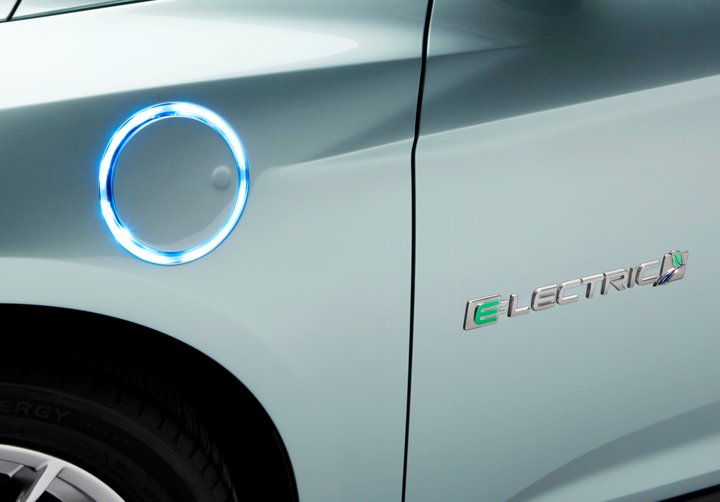 The first chance for the general public to see the 2012 Focus Electric will be at the 2011 Detroit Auto Show. Media days kick off Monday, and High Gear Media will be there to bring you all the latest news.

You can follow all our Detroit Auto Show coverage on our hub page, which includes our on-the-ground reporting, photo galleries, live tweets, videos, and more.

Ford provided beverages and a handful of quite tasty hors d'oeuvres to enable High Gear Media bring you this report .