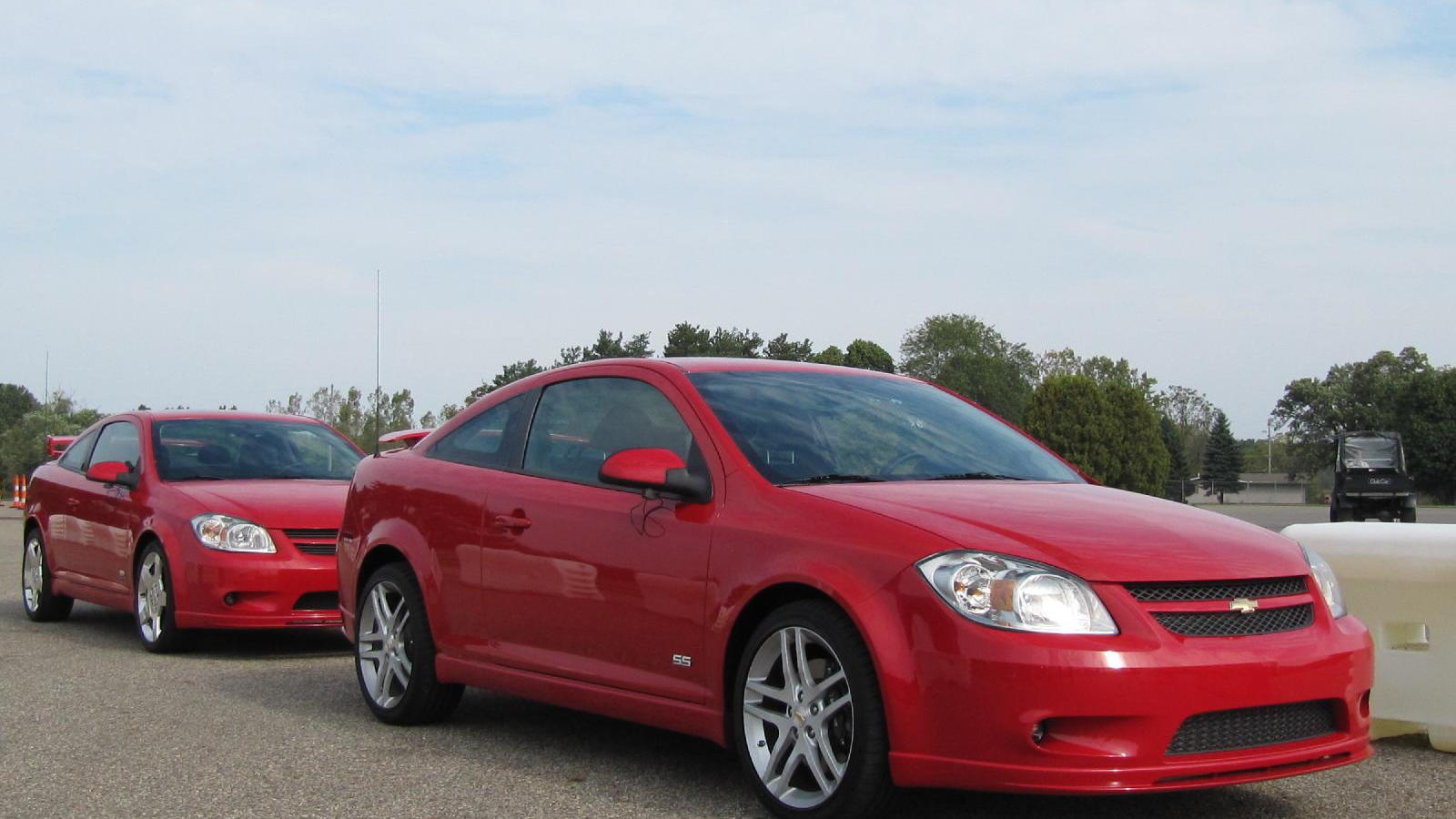 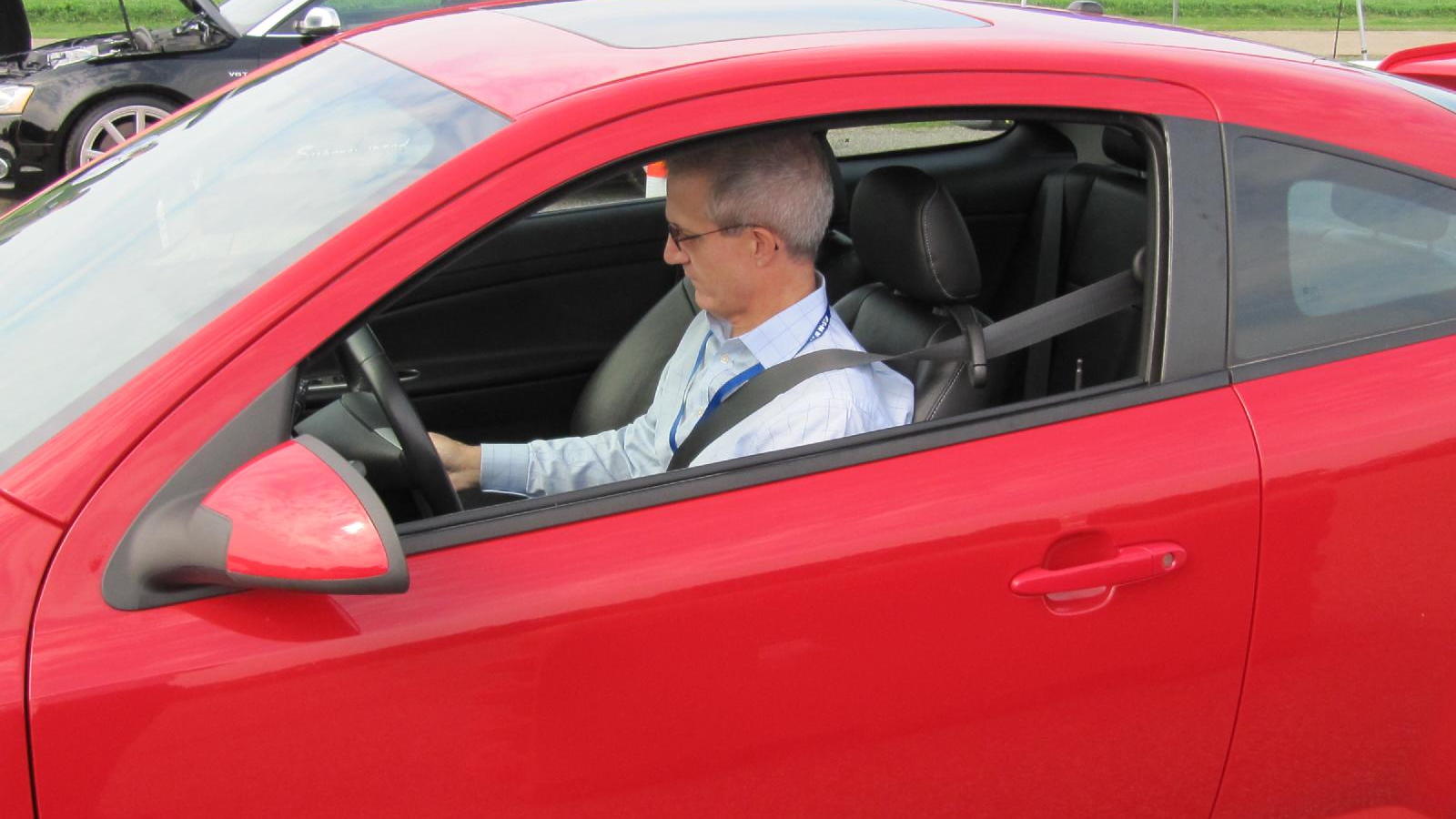 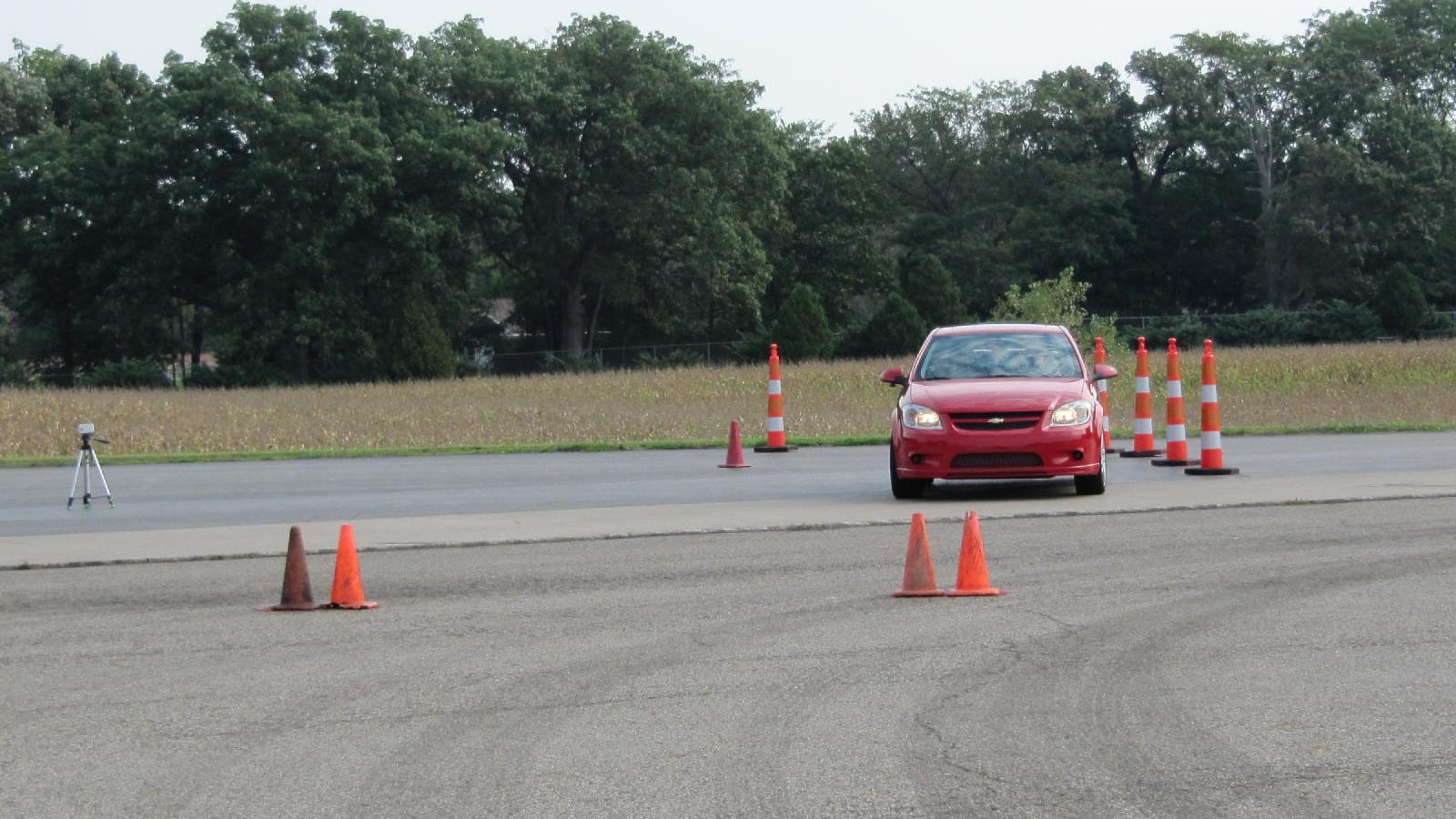 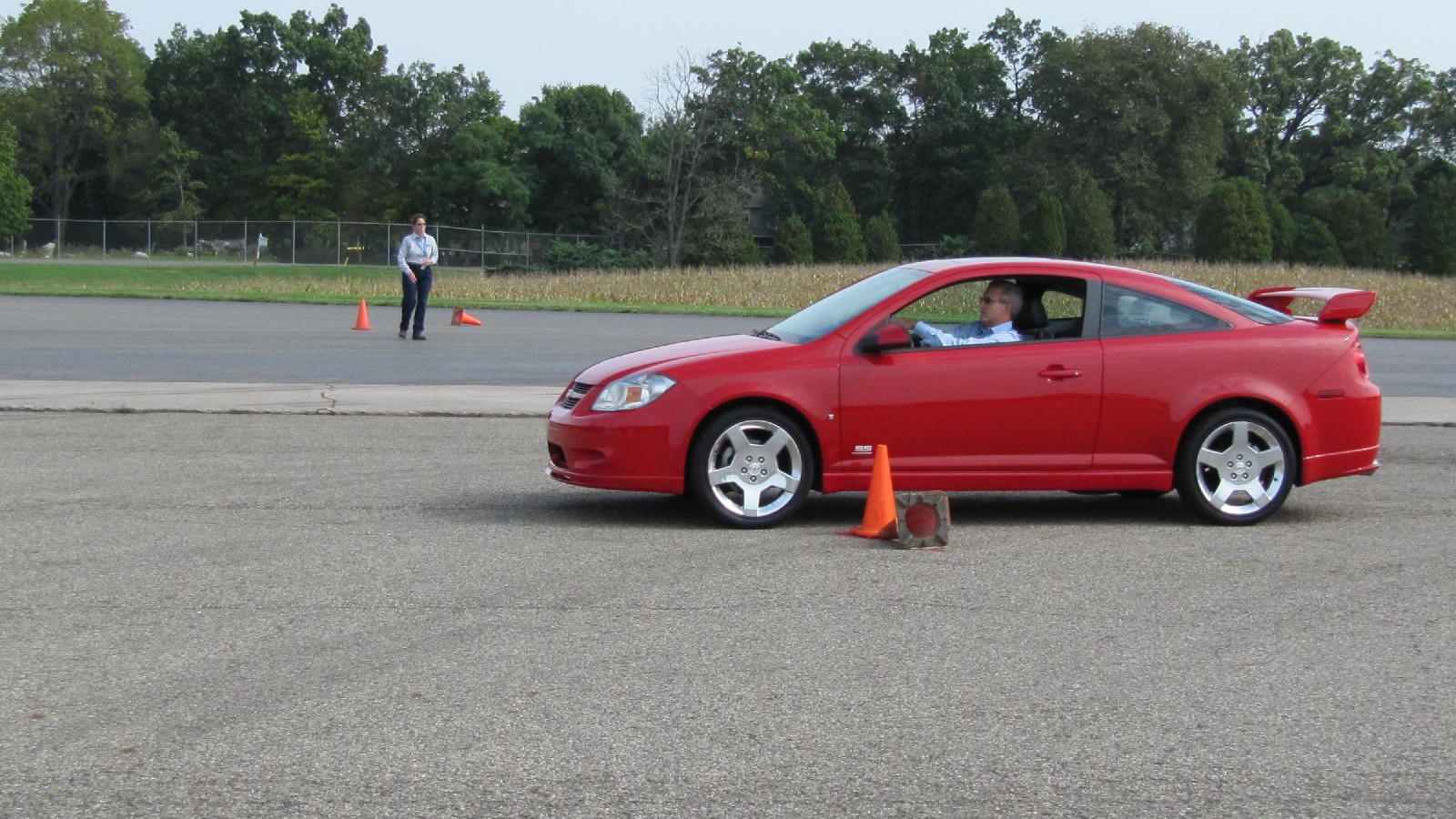 Turbochargers have been with us in volume production only since the Seventies, but superchargers have a long and honorable automotive history.

They were used on the Blower Bentleys that won Le Mans 80 years ago, and have appeared ever since on high-performance engines, often larger ones.

A boost for boost

Now, propelled by new and stricter emissions and fuel economy laws, both types of boost are poised to appear in much greater numbers as carmakers seek to make smaller engines far more efficient.

Ford in particular has branded its latest line of turbo engines as EcoBoost, applying both direct injection and turbocharging across the board, from 1.6-liter fours to 3.5-liter V-6s.

But on a recent visit to Eaton, the automotive supplier that makes more superchargers than any other company, executives argued that supercharging offers numerous benefits over turbos. 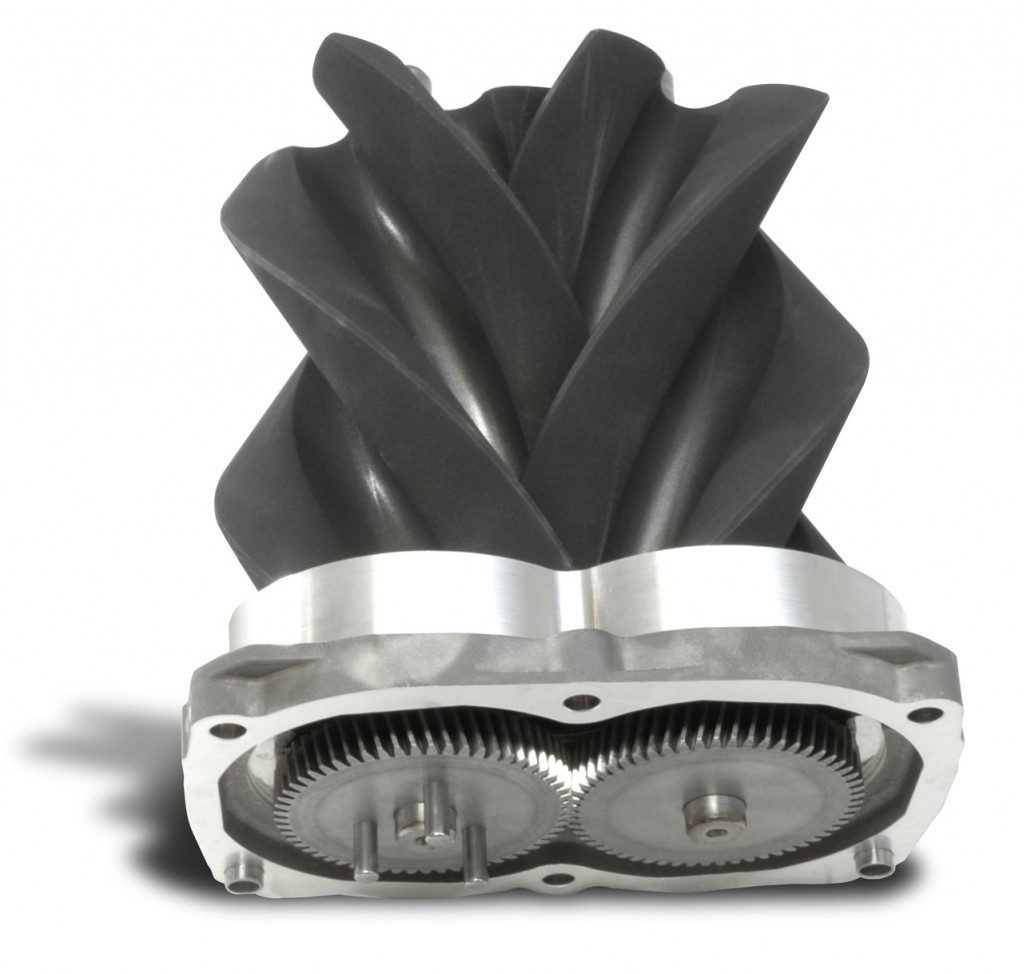 First, a bit of engineering background: Both turbos and superchargers are pumps that compress air and feed it at high pressure into the engine’s intake manifold. That allows more fuel to be injected to keep the fuel-air mixture constant, meaning the engine produces more power.

But superchargers are mechanical air pumps driven off the engine’s crankshaft, via chains, belts, or gears. Turbochargers, on the other hand, are small turbines propelled by the pressure of the hot exhaust gases.

Each has its pros and cons. Superchargers operate even at low engine speeds, but use engine power to do it, meaning they impose a parasitic loss across the engine’s rev range. 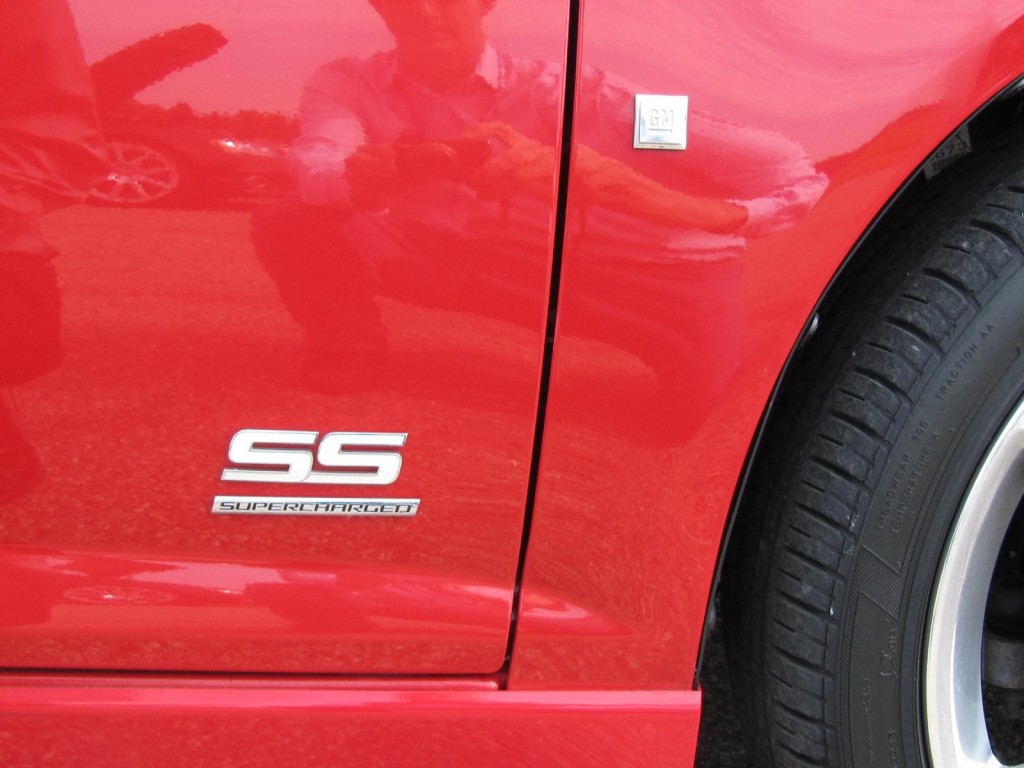 They are also usually more compact than turbos, and in a V-formation engine, they can sit in the vee between the cylinder banks.

Turbochargers, on the other hand, have historically operated best at higher engine speeds when the flow of the exhaust is strongest—leading to the phenomenon known as ‘turbo lag,’ in which there’s a short delay before power is delivered while the turbo spools up to its operating speed.

Turbos are also usually hung off the exhaust manifold, which on all but a very few new engines is on the outside of the cylinder bank.

For a V-formation engine, this means a pair of turbos is required—one per bank. Each outside turbo, along with its associated plumbing, increases the size of the complete engine package.

(Some manufacturers, including GM and BMW, have designed new V-8 engines with their manifolds reversed—intake on the outside, exhaust in the vee—so a single turbo can be mounted between the banks. This is a clever adaptation, but exhaust manifolds between two banks of cylinders can pose enormous challenges in managing such a concentration of engine heat.) 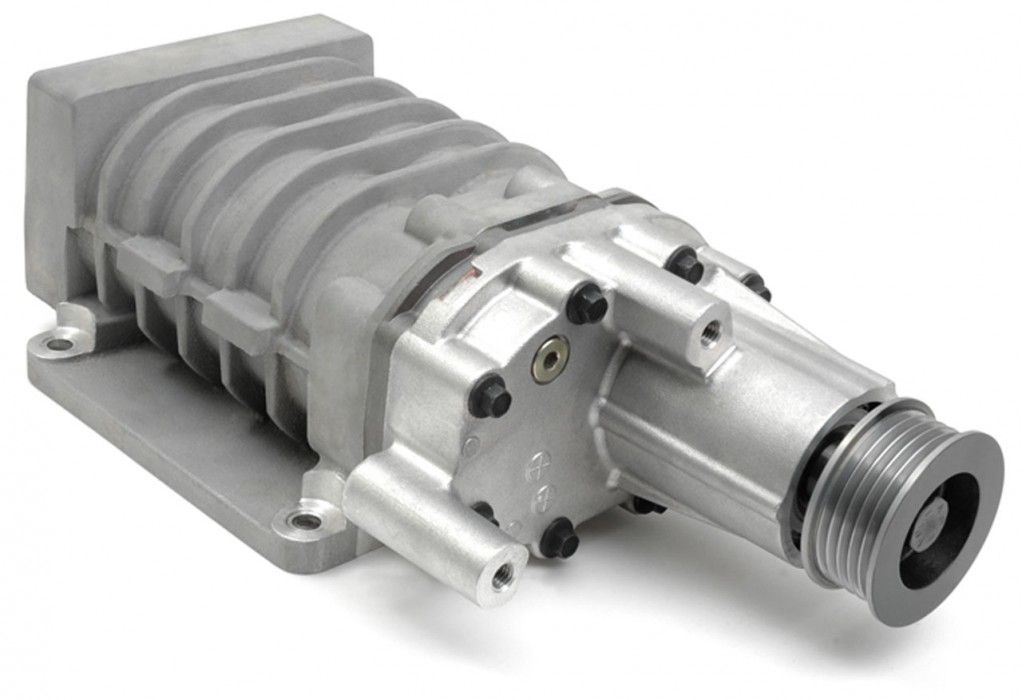 Adding Audi to Cadillac and Corvette

Eaton believes that as makers seek to make smaller engines work more efficiently, they will find advantages not only in downsizing, but also in “downspeeding”—keeping engine speeds lower to reduce friction losses at higher revs.

And that, says Eaton, is where superchargers win out. The company points to Audi, which extensively tested both turbocharging and supercharging for a new 3.0-liter high-performance V-6 engine program.

In the end, Audi decided that a supercharger provided the best mix of immediate power, low-speed torque, and compact packaging against the pair of turbos that would have been needed.

Its supercharged 3.0-liter engine first appeared in the 2008 Audi A6, and this year, the engine will be fitted to no fewer than eight Audi models, including its S4 and S5 high-performance models.

Supercharging takes the 3.0-liter V-6 from 290 to 430 horsepower, and Audi uses it to replace V-8s of both 3.6- and 4.2-liter displacements. The new engine produces the same performance as the larger V-8s, with fuel efficiency 17 to 24 percent higher.

An adaptation of the supercharged Audi 3.0-liter engine is also fitted to the 2011 Porsche Cayenne S Hybrid and 2011 Volkswagen Touareg Hybrid, the first hybrid from each maker. An Audi Q5 Hybrid is expected to follow.

In laps around Eaton’s Marshall, Michigan, test track, a current-year supercharged Audi A6 provided a surge of torque from virtually any speed, with the engine characteristics matched by an automatic gearbox that kept the engine operating largely below 4000 rpm.

No comparison or non-supercharged car was available for comparison, but the basic point came across.

Other performance cars that use Eaton superchargers are the Chevrolet Corvette ZR-1; the Cadillac CTS-V sedan, coupe, and station wagon; and the Jaguar XFR and XJR sedans, along with certain Range Rover models.

To convince journalists of the supercharger’s superior low-speed performance, Eaton set up a slalom course in a parking lot and offered up drives in two identical red Chevrolet Cobalts.

Each had the 2.4-liter Ecotec engine, but one had been fitted with a turbo while the other was boosted by Eaton’s supercharger.

The deck was stacked somewhat by the requirement that the whole slalom course be done in second gear. That kept engine revs low enough that turbo lag was readily apparent when accelerating out of tight corners.

Over roughly a dozen laps, we recorded a best time of 34.0 seconds in the turbo car, but 33.15 seconds in the supercharged car—which was, admittedly, far smoother to drive when slaloming in second gear.

Was the test realistic? Somewhat; U.S. drivers don’t necessarily like to shift, though manuals are now a rarity anyhow.

But to be fair, turbo lag has been largely eliminated in the latest crop of turbo engines. They are biased toward better fuel economy rather than sheer performance.

The market for turbochargers is still far larger than that for superchargers, largely due to turbos’ use on most modern automotive diesel engines.

In Europe, where roughly 50 percent of new cars are now sold with turbodiesels, supercharging is restricted to the upper end of the market—in those Audis, Jaguars, and Range Rovers.

Indeed, turbo maker Honeywell projects that by 2015, turbos will be in 35 million cars a year, more than double the 2009 rate of 17 million.

Still, low-end applications exist for superchargers too. One of the most technically interesting engines in the world is Volkswagen’s 1.4-liter TSI "Twincharger" four, which uses both a supercharger and a turbo.

Like Ford with its EcoBoost line, VW's goal was to reduce carbon dioxide emissions while maintaining power, torque, and driving characteristics in an engine that could be produced in high volumes for a variety of vehicles.

The 1.4-liter four-cylinder delivers 168 horsepower, more than 100 hp per liter, not to mention 33 miles per gallon. That's the same torque as a 2.3-L engine while using 20 percent less fuel.

Once the turbo gets close to its maximum boost of 2.5 atmospheres, a bypass flap opens to switch all the intake air supply from the supercharger to the turbo. Together, the two pumps provide consistently high torque from 1750 to 4500 rpm.