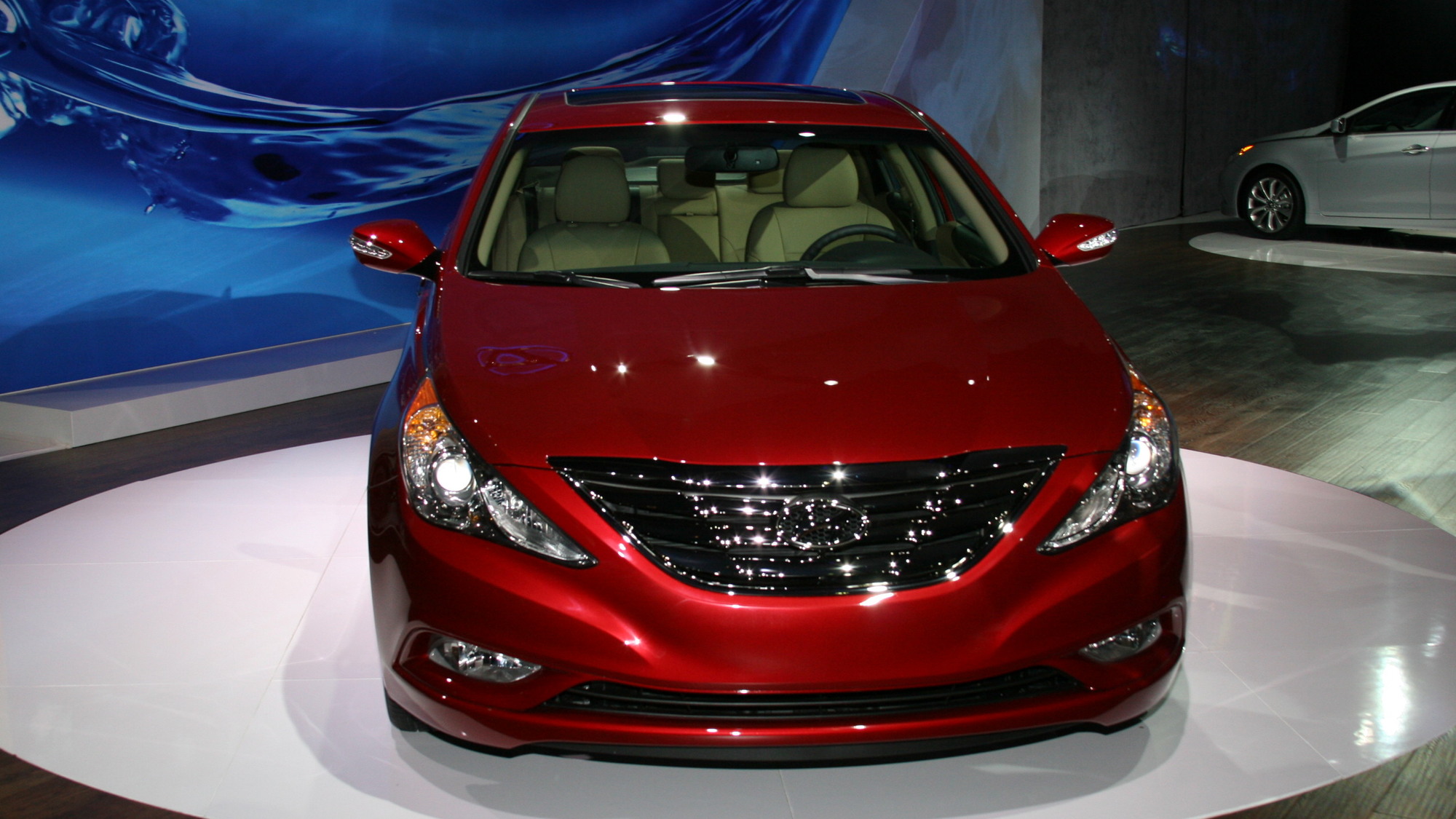 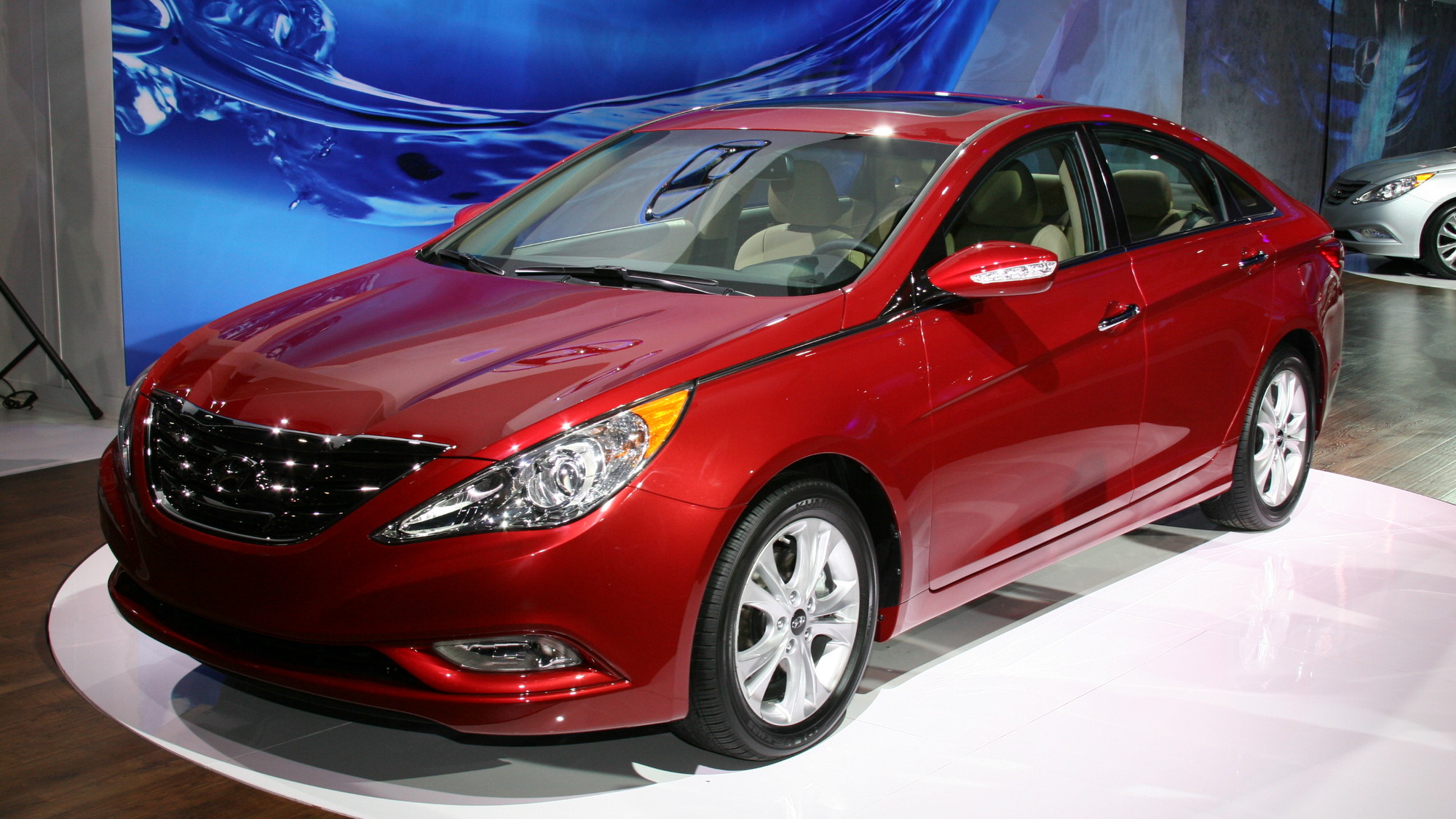 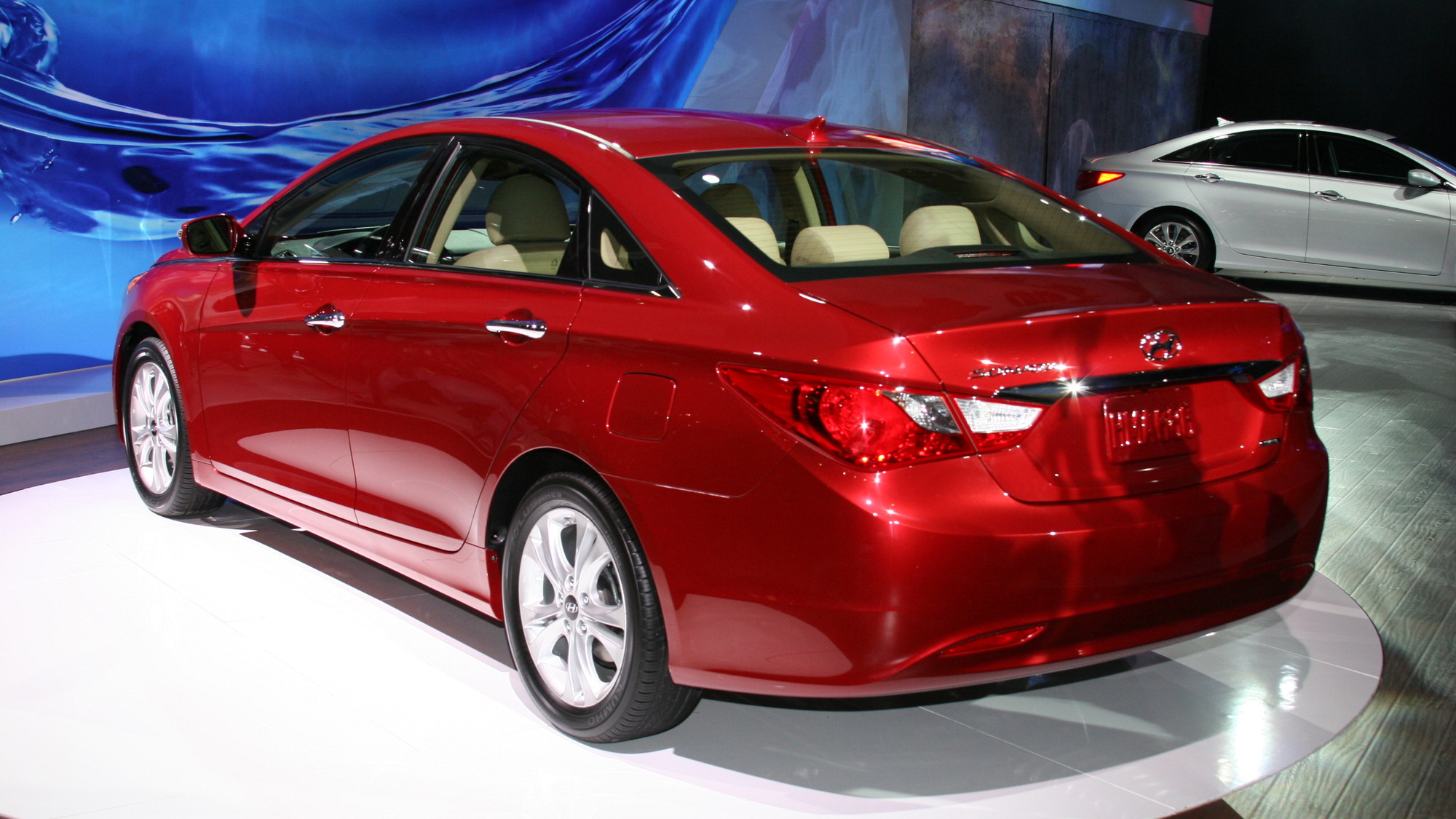 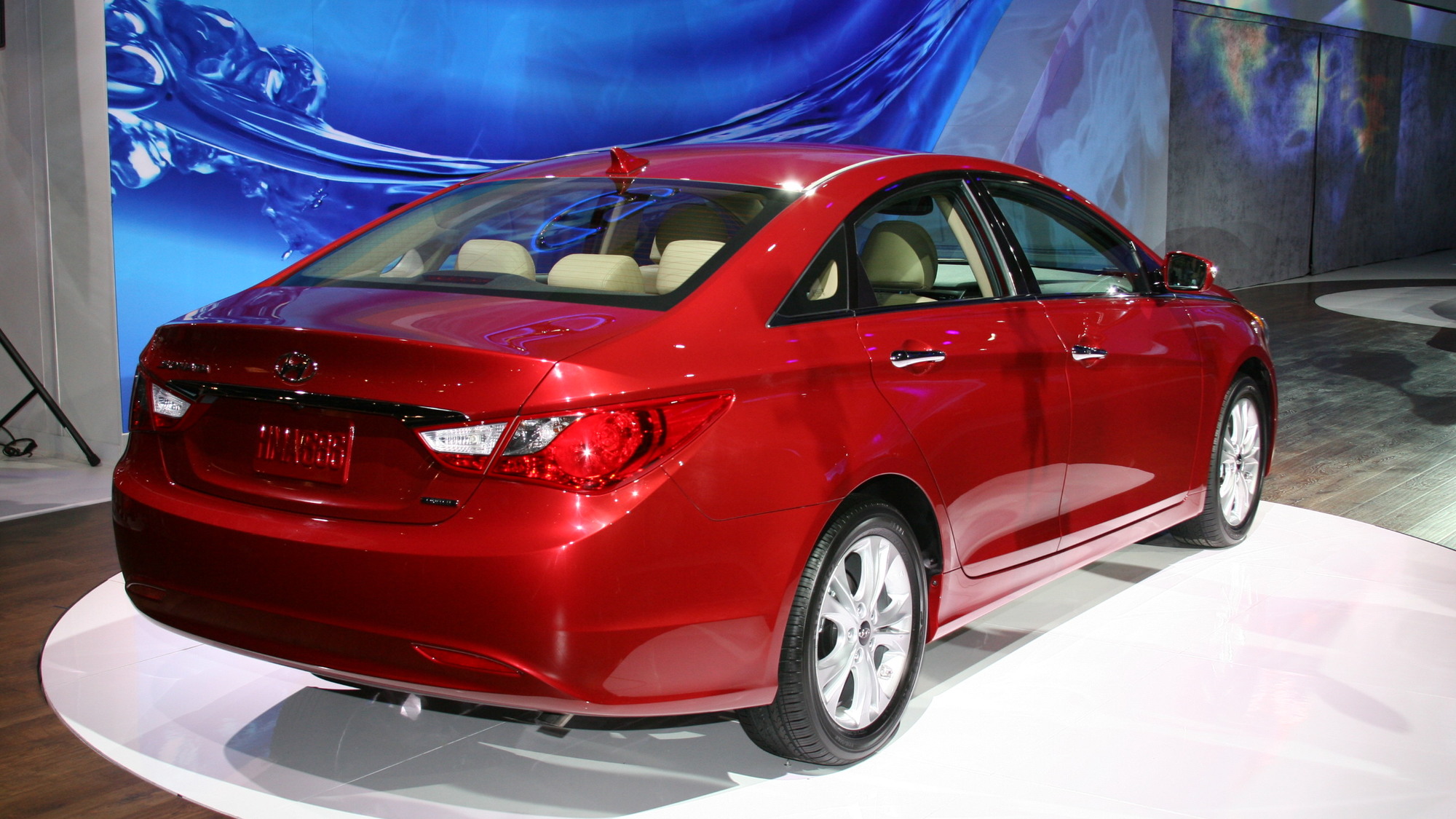 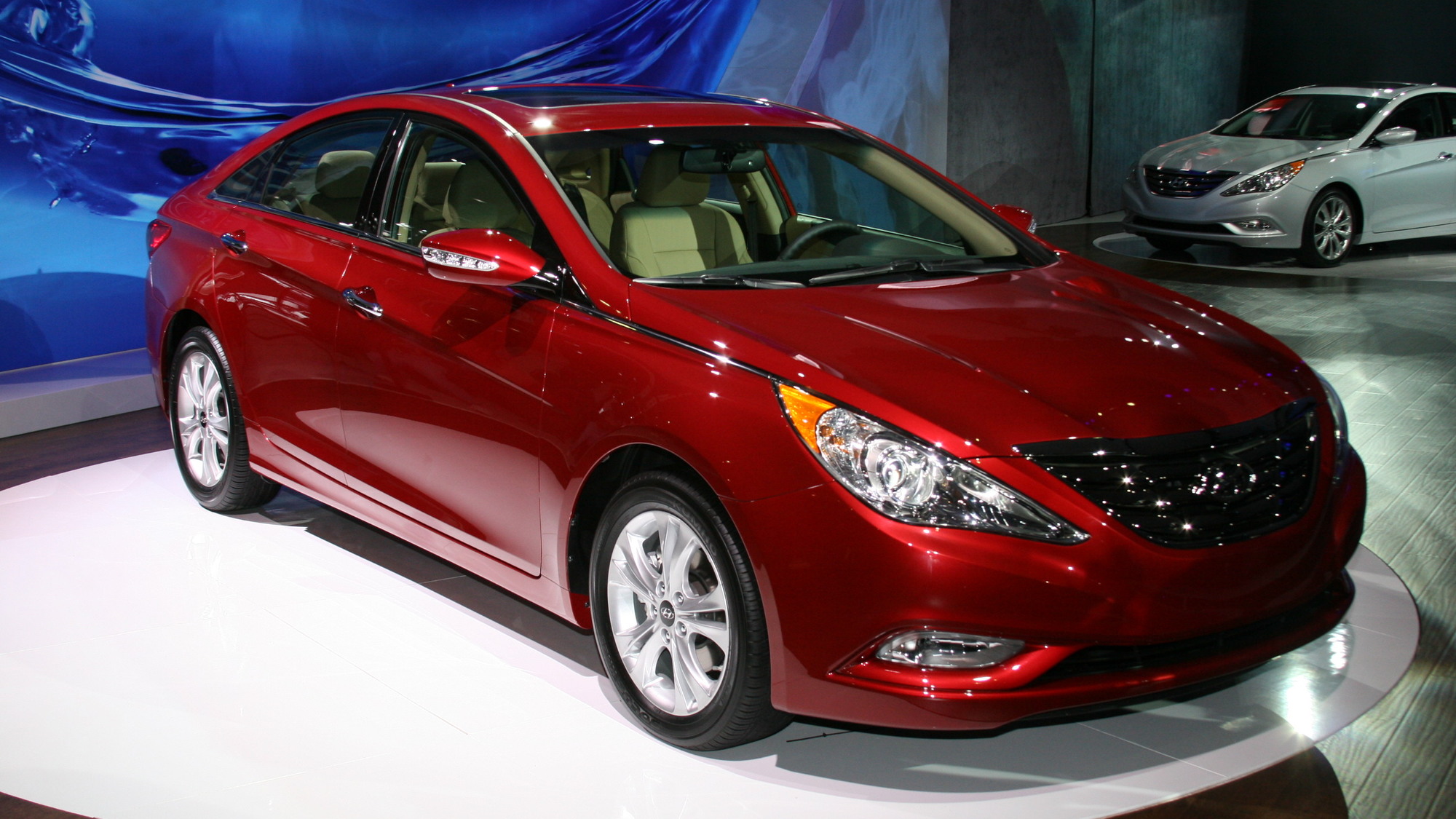 Right now, if you want a midsize sedan that's also a hybrid, you have exactly two choices: the 2010 Toyota Camry Hybrid, or the new 2010 Ford Fusion Hybrid.

That's about to change. Six weeks hence, at the 2010 New York Auto Show, Hyundai will take the wraps off its 2011 Sonata Hybrid.

The fuel-sipping four-door is the latest proof of the Korean maker's intent to go head-to-head with the struggling Toyota leviathan.

The 2011 Hyundai Sonata itself was unveiled at the Los Angeles Auto Show last December, at the same time that Hyundai announced that to improve its gas mileage, it would no longer fit V-6 engines to midsize cars or compact crossovers.

Lithium cells from the start

The next step in its quest for better gas mileage is the hybrid Sonata, the company's first in the U.S. It will use lithium-polymer cells in its battery pack, entirely skipping the nickel-metal-hydride cells that Toyota, Honda, Ford and other hybrid makers currently use.

Hyundai is pursuing several hybrid initiatives, and has even shown its Blue-Will plug-in hybrid concept at auto shows around the world. Last July, its domestic-market Elantra LPI Hybrid sedan became the world's first production vehicle to use lithium-polymer cells.

The powertrain in the 2011 Sonata Hybrid will be similar to the one in the Nuvis concept crossover from the 2009 New York Auto Show: a 2.4-liter four, six-speed automatic transmission, and a 30-kilowatt electric motor powered by a 1.4 kilowatt-hour battery pack.

By building the Sonata Hybrid at its plant in Montgomery, Alabama, Hyundai becomes the fourth automaker to build hybrids in North America. First came Ford with its Escape Hybrid, then a variety of General Motors vehicles, and more recently Toyota's Camry Hybrid.

The new 2011 Hyundai Sonata has been well received. Our sister site TheCarConnection lauded its zoomy new styling, entertainment options, and fuel efficiency, though we asked if the lack of a V-6 would hurt the Sonata--and found the interior not to everyone's taste.

The latest Sonata was designed in southern California, and its express "fluidic sculpture" design language is meant to create "an emotional connection with consumers," in the words of a Hyundai executive at a press event this morning.

It competes in the hotly contested midsize sedan market, against stalwarts like the Toyota Camry, Honda Accord, Nissan Altima, Ford Fusion, and Chevrolet Malibu.

Best-in-class MPG without a hybrid

The standard version is fitted with a 198-horsepower direct-injected 2.4-liter four, paired with either a six-speed manual or a new six-speed automatic. Fuel efficiency is rated at 24 mpg city, 35 mpg highway with the six-speed manual, a best-in-class result. (A turbocharged 2.0-liter engine will be added later.)

The 2011 Hyundai Sonata GLS model, the base, starts at just $19,195 with the six-speed manual. The top-of-the-line Limited model starts at $25,295, but pricing on the Sonata Hybrid probably won't be released until the New York Auto Show in April.

Check back Monday for driving impressions

GreenCarReports.com will bring you driving impressions from the 2011 Hyundai Sonata on Monday, and we'll bring you full details from the New York show as it happens. Stay tuned for more on the very first hybrid Hyundai.