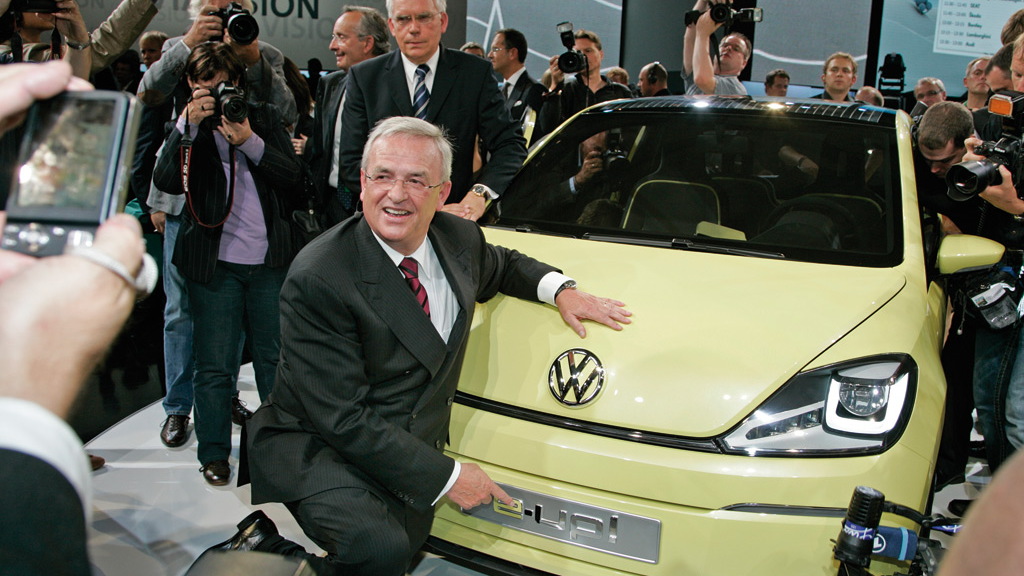 With the Frankfurt Auto Show now underway, Volkswagen came out with both guns blazing to underscore its green-car credentials.

The latest VW concept is the E-Up, a battery electric version of its Up mini-car, with 80 miles of range. It follows the L1, an ultra-high-mileage diesel two-seater that returns an astounding 170 miles per gallon.

In some ways, the E-Up is the more unexpected of the two. Like most German makers, VW was late to the electric-vehicle game. It hasn't yet launched any hybrids, instead focusing on its diesels.

Indeed, its press release says somewhat defensively that volume production of electric cars won't happen until 2020 at the earliest. (That may be news to Chevrolet, Mitsubishi, Nissan, Renault, and Subaru, all of which plan to build electric cars in volume well before 2015.)

Until then, Volkswagen says, clean diesels and small engines offer the best path to fuel efficiency and low emissions.

The E-Up, promised for low-volume production during 2013, is adapted from VW's new small family of cars to be launched with diesel and gasoline engines in 2011.

Its 18-kilowatt-hour lithium-ion battery, which powers a 40-kilowatt electric motor (with peak power of 60 kW) driving the front wheels, gives it a range of up to 80 miles. The quoted top speed is 84 miles per hour, and VW says it will do 0 to 62 mph in 11.3 seconds.

With two adult seats on the passenger side, its "3+1" seating is akin to that of the 2011 Scion iQ--though at 10.5 feet long, the E-Up is several inches longer than Toyota's baby car.

Close to full recharge in just an hour

Recharging at a standard European 230-Volt outlet takes a maximum of five hours, with the potential to charge to 80 percent "full" in just an hour, depending on the charge infrastructure.

The E-Up weighs only 2,390 pounds, impressive when you consider that the battery pack alone (carried in a tray in the car's floor) represents 530 pounds of that.

Styling the next Beetle

"The E-Up really appears to smile," says Volkwagen chief designer Walter Bischoff, calling it "the Beetle of the 21st century." Indeed, the V-shaped front hood does have a familiar appearance to anyone who remembers the air-cooled "people's car" of the last century.

With no openings needed for radiator cooling air, the most noticeable style element up front is the traditional round chrome VW logo--which hides the electric charging port.

Like many concepts--and now even one model of the 2010 Toyota Prius--the E-Up roof is covered in photovoltaic solar cells. They're fitted to the backs of the sun visors too, and the whole array provides power to the car and runs cooling fans to vent warm air when parked.