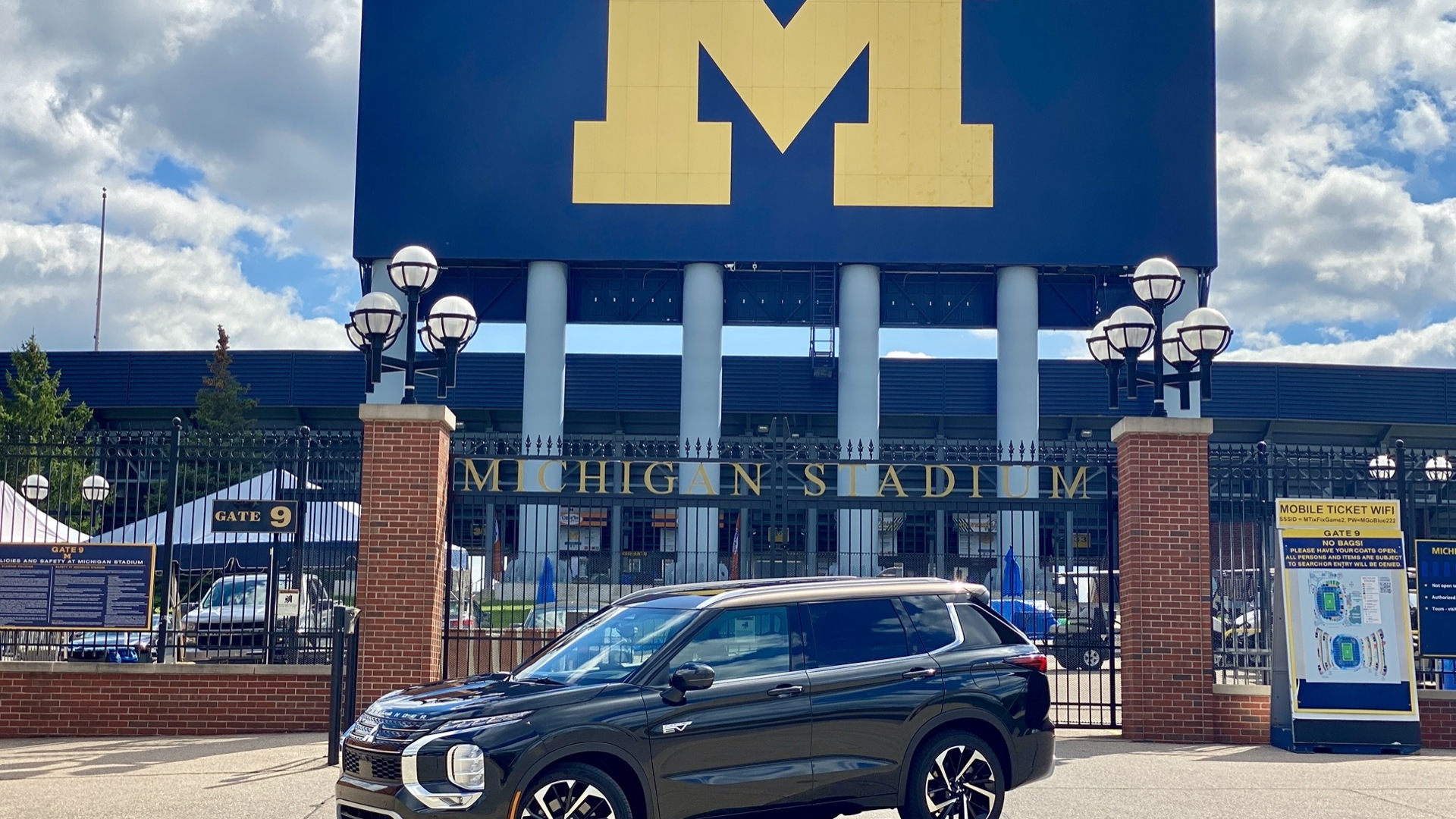 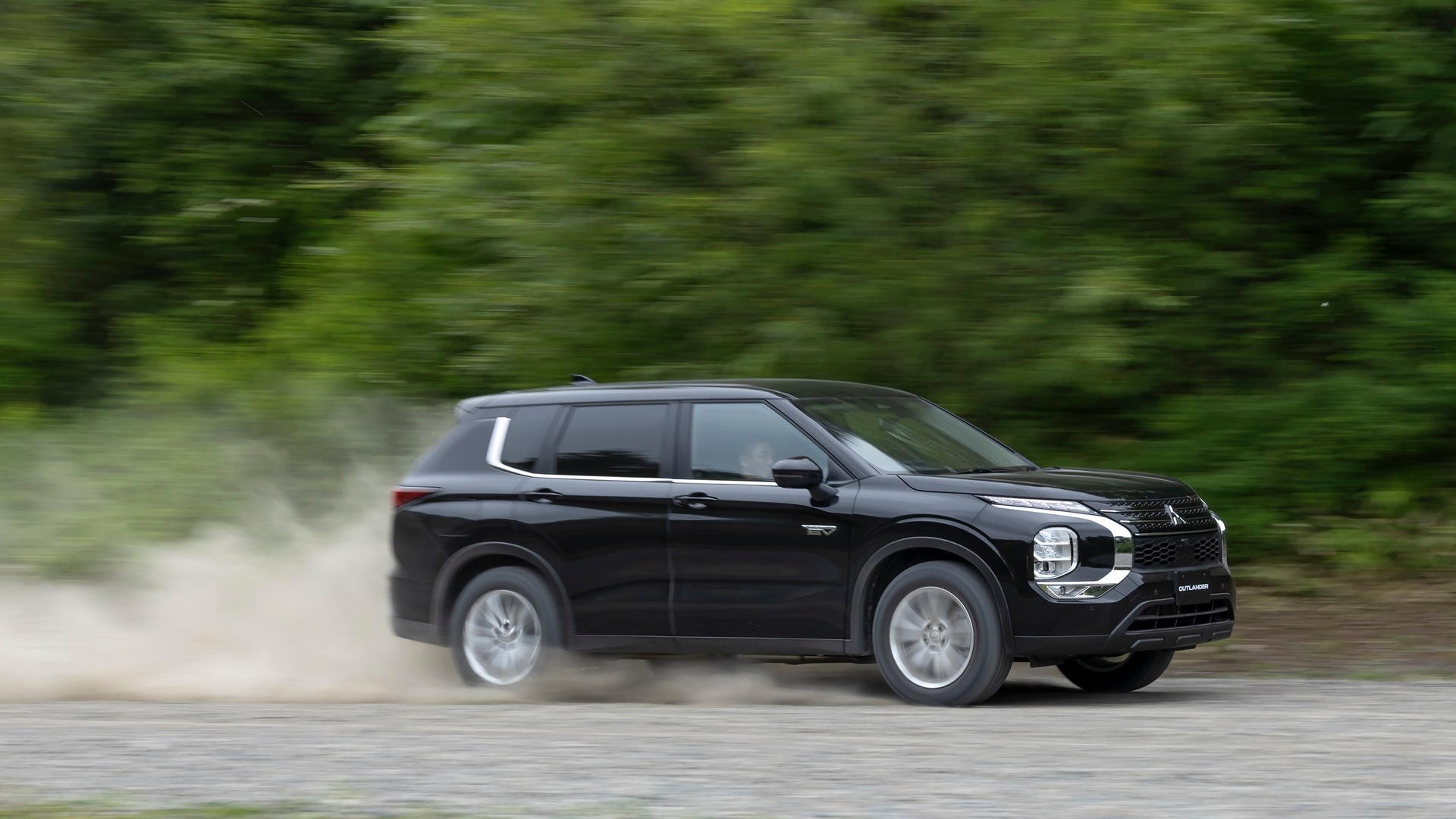 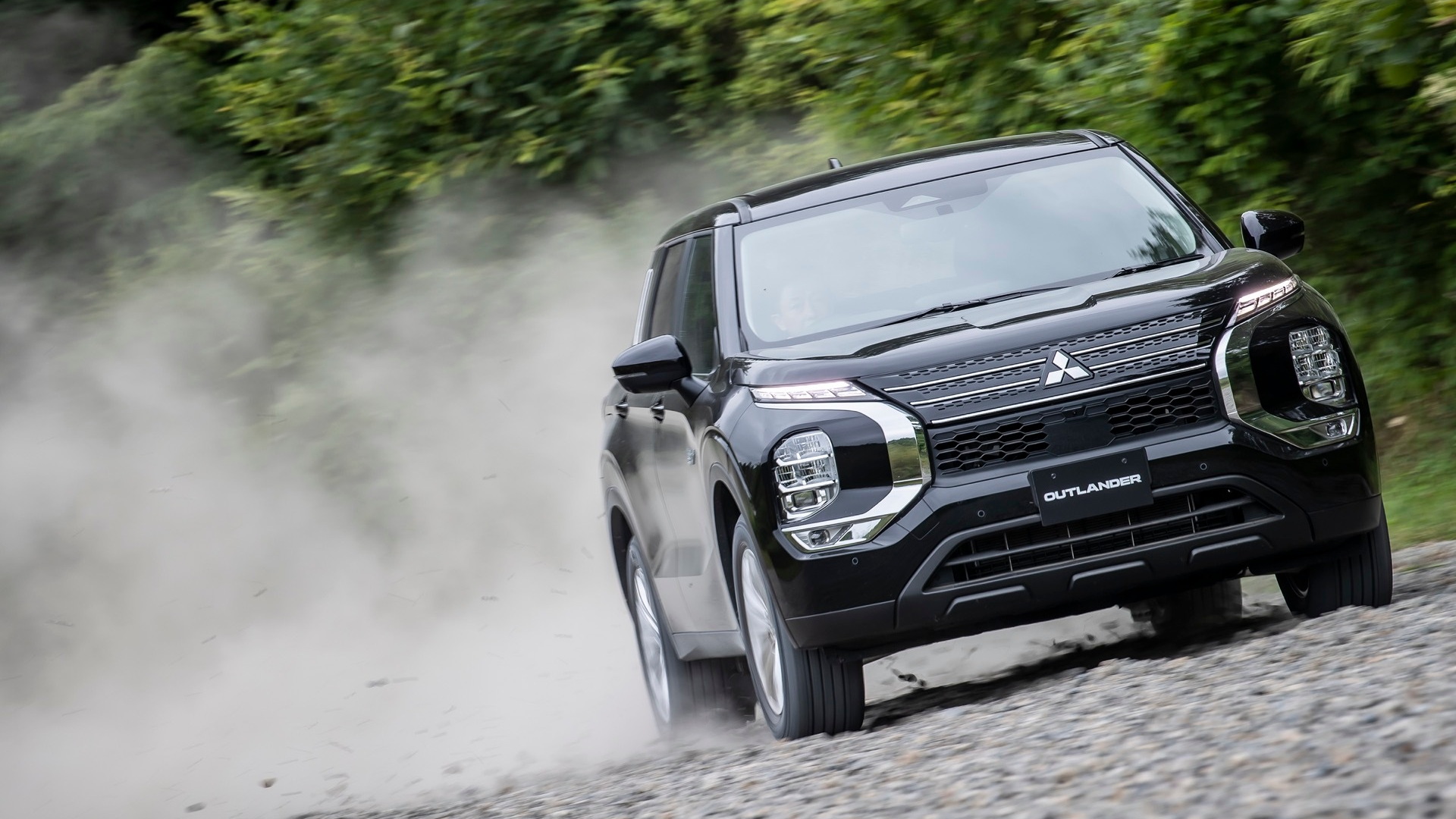 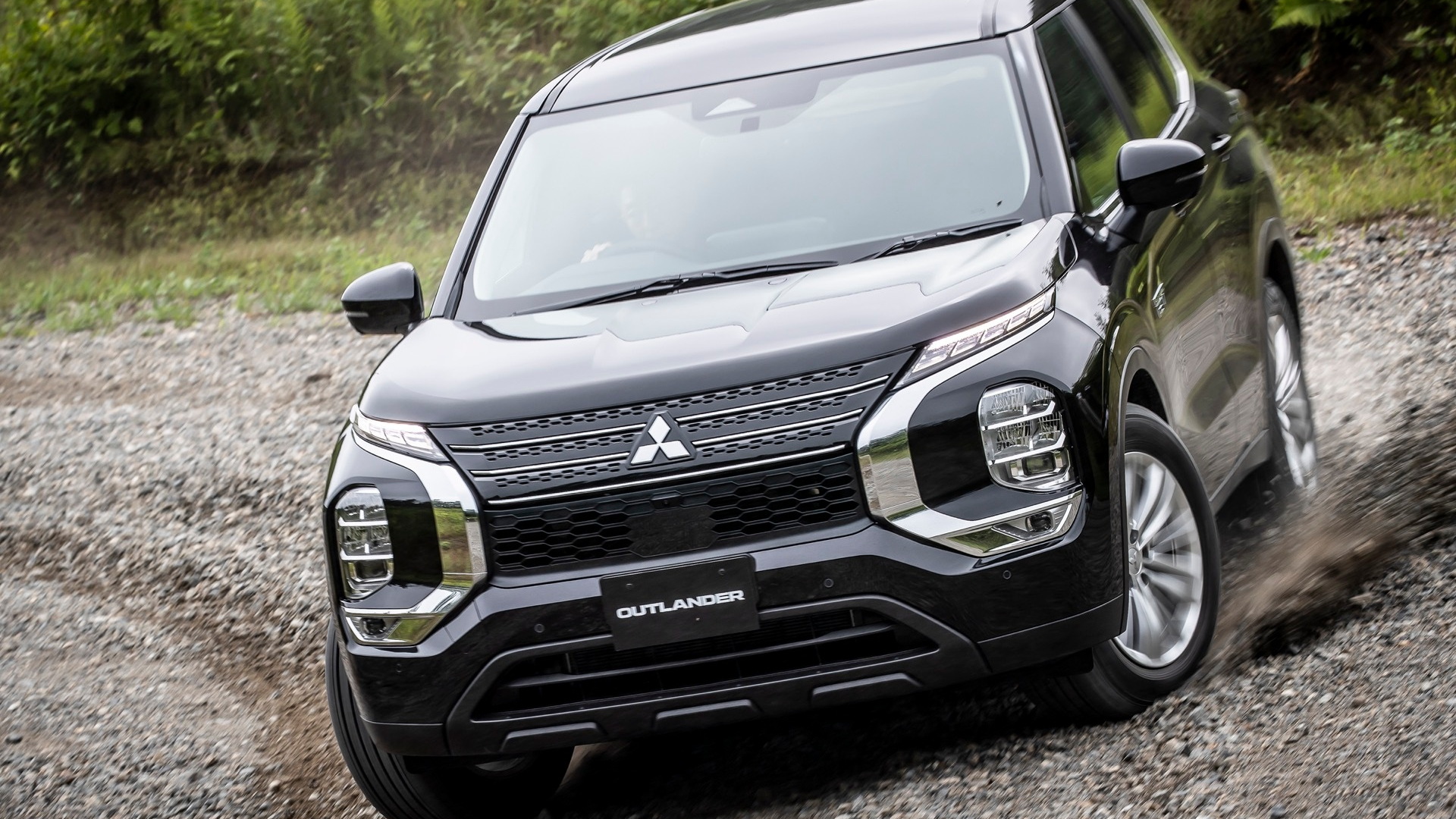 The redesigned 2023 Outlander plug-in hybrid is Mitsubishi’s most important vehicle. Not in terms of sales volume, performance, or even competitive efficiency: Instead, the three-row SUV showcases Mitsubishi’s potential moving forward.

With an improved drive system and premium appointments, the new Outlander PHEV promises that Mitsubishi can not only stay viable in the near future, but desirable in its transition from combustion to electrification.

“The Outlander PHEV is more than just another SUV for us to sell, it represents a paradigm shift at Mitsubishi Motors,” Mark Chaffin, president and CEO of Mitsubishi Motors North America, told Green Car Reports. “It’s the gateway to electrification.”

First launched in 2013 and with global sales eclipsing 300,000, the Outlander PHEV is the world’s bestselling plug-in hybrid, by Mitsubishi’s count. Being there first has its advantages. Now the second-generation PHEV comes with a small third-row seat to accommodate seven passengers total, a larger battery, and more powerful motors, all in its quest to become an SUV that drives more like an EV.

The improvements should help it fend off the 2023 Kia Sorento PHEV and its six seats, as well as the Chrysler Pacifica Hybrid minivan. This time around, the PHEV shares the same platform and body of the gas Outlander redesigned for 2022. The wheelbase is 1.4 inches longer than its predecessor, and the body is 2.3 inches wider and 1.5 inches taller. It’s more versatile than the Nissan Rogue that it also shares a platform with as part of Mitsubishi’s alliance with Renault and Nissan.

The biggest change comes from what’s under the third row of seats. A 20-kwh battery pack replaces the outgoing 13.8-kwh pack, representing an increase in capacity of 54%. The electric range increases from 24 miles to 38 miles, which impresses even as it falls short of the five-seat Toyota RAV4 Prime’s 42 miles of range. Together with a larger 85-kw motor up front and 100-kw rear motor (up from 60 kw and 70 kw respectively), the 2023 Outlander PHEV operates more often in electric mode.

In an afternoon test driving it around Mitsubishi’s development center in Ann Arbor, the Outlander PHEV proved to be better than its predecessor in all aspects, while continuing with what made it stand out before there were rival PHEV SUVs: the seamless transition between the engine and motors.

With 40% more electric propulsion, the 2023 Outlander PHEV relies less on the 2.4-liter inline-4 that mostly carries over except for tweaks to the exhaust system. With a traction motor at either axle, and another motor generator, the system makes 248 hp and 332 lb-ft of torque. It doesn’t jump off the line like an EV but it responds more quickly than a turbocharged engine. It’s smooth, thanks in part to a hydraulic clutch that brings the engine in and out of a direct connection to the front wheels and to the rear motor that provides full-time all-wheel drive.

The power mostly stays up front in the default EV mode, which can provide electric power up to about 84 mph with enough charge. Heavy throttle kicks the engine on; it becomes effectively a series hybrid for passing moves as well. When cruising at highway speeds, it acts as a parallel hybrid by relying on the 2.4-liter when it’s at its most efficient. The shuffle between power sources mostly escapes notice, except for the new power display in the 12.3-inch digital instrument cluster that’s standard on the Outlander PHEV.

In its default state of Eco mode on EV power, it was quiet enough to hear the whir of the motors. There’s not much wind noise but some road noise infiltrated the cabin on the highway in part from the 20-inch wheels standard on the tester.

Via a dial on the console, Power and Tarmac modes run the engine as a hybrid system, while Normal, Gravel, Snow, and Mud blend engine and EV power. The smooth power delivery could be undermined by modes that didn’t instantly meet expectations.

In a couple instances when the engine kicked on for a passing move, the system didn’t switch back to EV Mode right away. Kotaru Honda, the Outlander PHEV’s chief vehicle engineer, explained that when the gas engine starts the first time, it has to run for a minute or so to heat the catalyst to a running temperature. Then it will revert back to EV Mode. This is a common issue with PHEVs; once you start the engine it's on for a while.

In battery save mode, the Outlander PHEV might still run on battery power for a bit. Let’s say you click the button to preserve 80% of charge: the system can oscillate between ICE and EV to stay within that held state of charge. It’s an average, not a constant state, so if you’re adding more regen by coasting, then the battery might power on until it’s back down to the 80%. It’s also common for a PHEV and it wouldn’t have been noticeable if I hadn’t been studying the display.

A Charge mode can charge the battery from the engine while idling, essentially making it a gas generator to restore battery charge.

The various drive modes affect the regen brake settings. In Power and Tarmac modes it defaults to the least amount of regen braking, B5. Eco mode dials in at B3, but the default mode is B2. The differences between the six levels were only felt at the ends of the spectrum; it’s never grabby enough to make it lurch forward as in some EVs, but it also lacks one-pedal driving down to a stop. Three settings on the paddle shifters would do the job just as well, and if you don’t want to fiddle with a paddle there’s a button on the console.

On an unscripted jaunt down a gravel road, and with the drive mode selector in Gravel, the Outlander PHEV’s all-wheel-drive system proved its worth. With no mechanical connection to the rear axle, the full-time system shuttled torque instantaneously between the axles. When the inside rear wheel scrabbled around a turn and the rear started to slide, the brake-based torque vectoring held the inside wheel and let the outside wheel take over. Vectoring on the rear wheels is new for 2023.

Then coming out of the slightest of drifts, enough to infuse me with rally car fantasies I could never realize with the Mitsubishi rep riding shotgun, there was plenty of power at the rear on the straight to kick up clouds of gravel dust.

The handling of the Outlander PHEV has matured. It evolves out of the wilder, looser nature of its youth into a more composed and assured crossover. It was where I was most impressed, and was fun in the way the Pacifica Hybrid could never be.

Ground clearance increases from 7.3 to 8.3 inches and with the larger tires, there’s no overcoming the body lean from the high rider but the increased rigidity leads to more composure and stability.

The steering also improves for better on-center steadiness but also less flab. The lock-to-lock ratio has dropped from 3.3 turns to 2.6 turns and with the electrically assisted steering motors placed closer to the tires, there’s a quicker, more direct response.

Another noteworthy change to the mechanicals manifests in fewer stops at the charger and gas station. The gas tank grows to 14.8 gallons, from 11.3 gallons, and is larger than the ICE Outlander’s 14.5-gallon tank. The change from a steel tank to a plastic molded one that can wrap around other battery and propulsion components enables a total hybrid range of 420 miles without sacrificing any interior space.

The larger battery sits below the cabin floor, the larger tank fits under the second row, while a rear motor nestles under the standard third row. Even children will have trouble fitting in that third row. If you’re big enough to have your feet on the floor, you’re too big for the third row. In a pinch, you could finagle the middle-row passengers to wedge their knees into the front seat backs to fit up to seven small people to the birthday or graduation party but the passengers' tolerance will have an inverse relationship with miles traveled.

With the mid-row seats slid all the way back into the third-row seats, the mid-leg room is 38.5 inches. The second row has a 40/20/40 split, but the bottoms are 60/40 so when you slide it forward or tilt the seat the 40/20 on the driver side moves as one unit. It’s convenient. That’s not the case for the third row. It takes four steps to open or collapse it, including manually folding the head rests. The default setting will most likely be down for Outlander PHEV owners.

The increased capacity, power, range, and seats are nearly overshadowed by uncanny luxury-like appointments on the top 40th Anniversary Edition model. Fully loaded and with no factory options, the 40th nudges Mitsubishi into premium territory with black and saddle tan semi-aniline leather; heated and cooled front seats; the 12.3-inch cluster with crisp cool graphics; a 9.0-inch touchscreen with a font too close to Nissan’s; a 10.8-inch head-up display; Bose sound; a wireless smartphone charger; a  panoramic sunroof; three-zone climate control; a heat pump; and a power tailgate whose button is inconveniently wedged too close to the steering column.

A two-tone roof pops with certain color combos. The 40th comes with a bronze roof barely distinguishable from the black body, except in sunlight, and black roof options pair with Red Diamond, Sterling Silver, Titanium Gray, and White Diamond.

The Outlander PHEV can CHAdeMO fast-charge from 0% to 80% in 38 minutes at a max output of 50 kw. Most PHEVs lack fast-charging capability. On a Level 2 CCS charger at 15 amps, it’ll take 6.5 hours to charge to full. Mitsubishi expects the EPA to certify the 2023 Outlander PHEV at 38 miles of range and at 64 MPGe.

Is the Mitsubishi Outlander PHEV worth it?

Pricing for the 2023 Mitsubishi Outlander PHEV starts at $41,190, including a $1,345 destination fee. The top 40th Anniversary Edition is expected to crest $50,000, but it won't be finalized until closer to its November 1 on-sale date. Like virtually every other PHEV, it no longer qualifies for the revised federal EV tax credit.

Mitsubishi provided lunch to fuel us on this firsthand report.