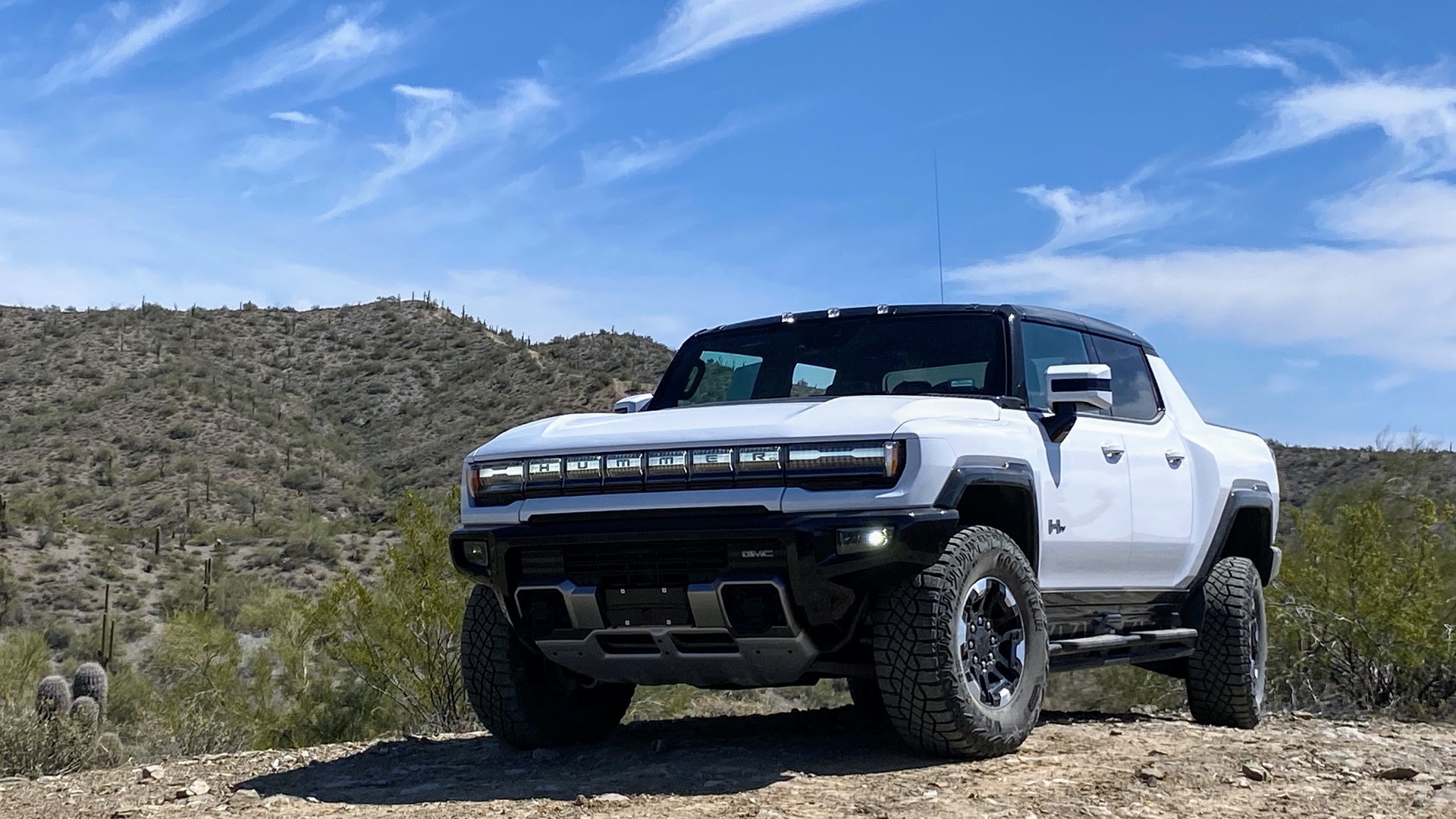 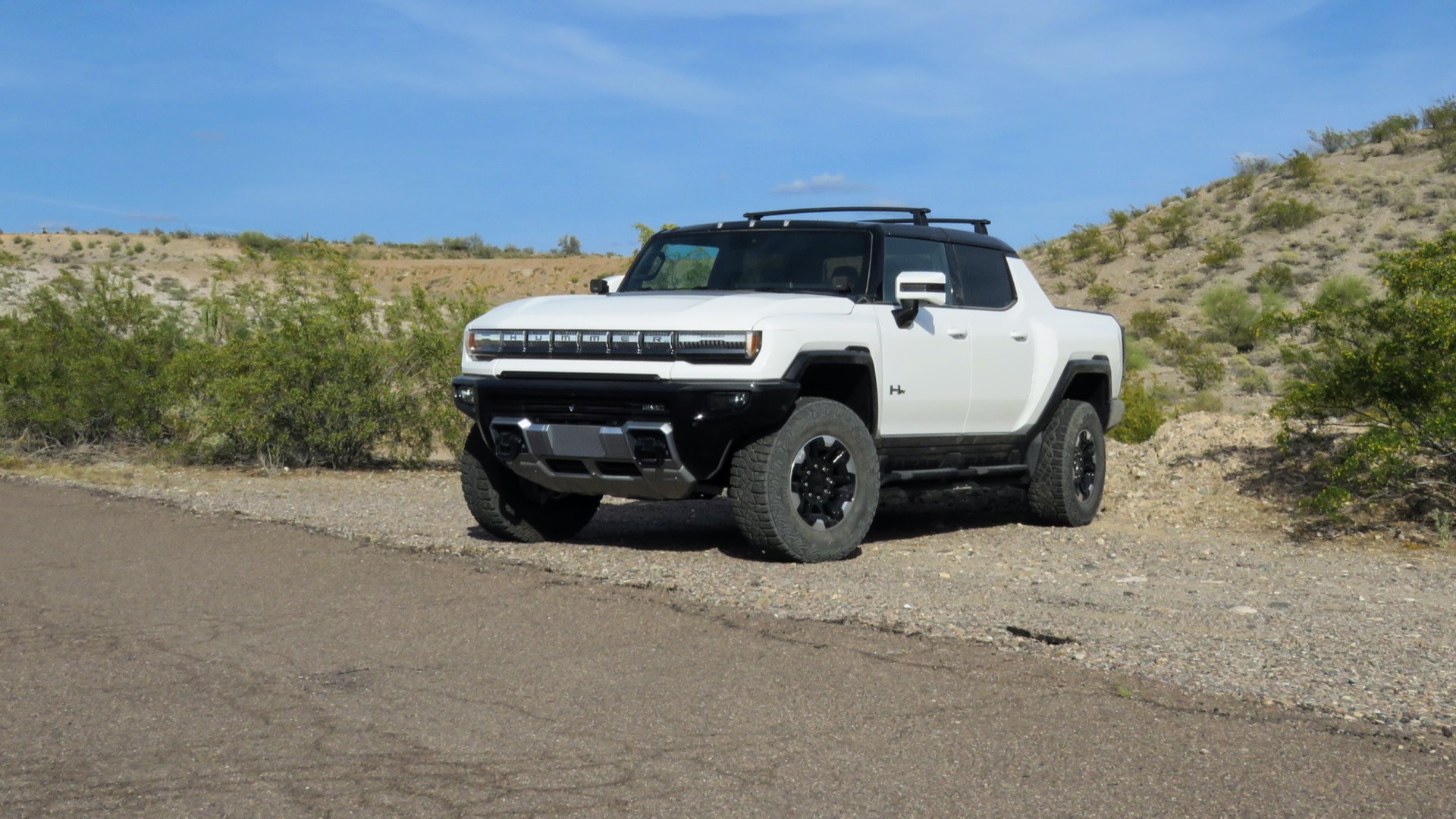 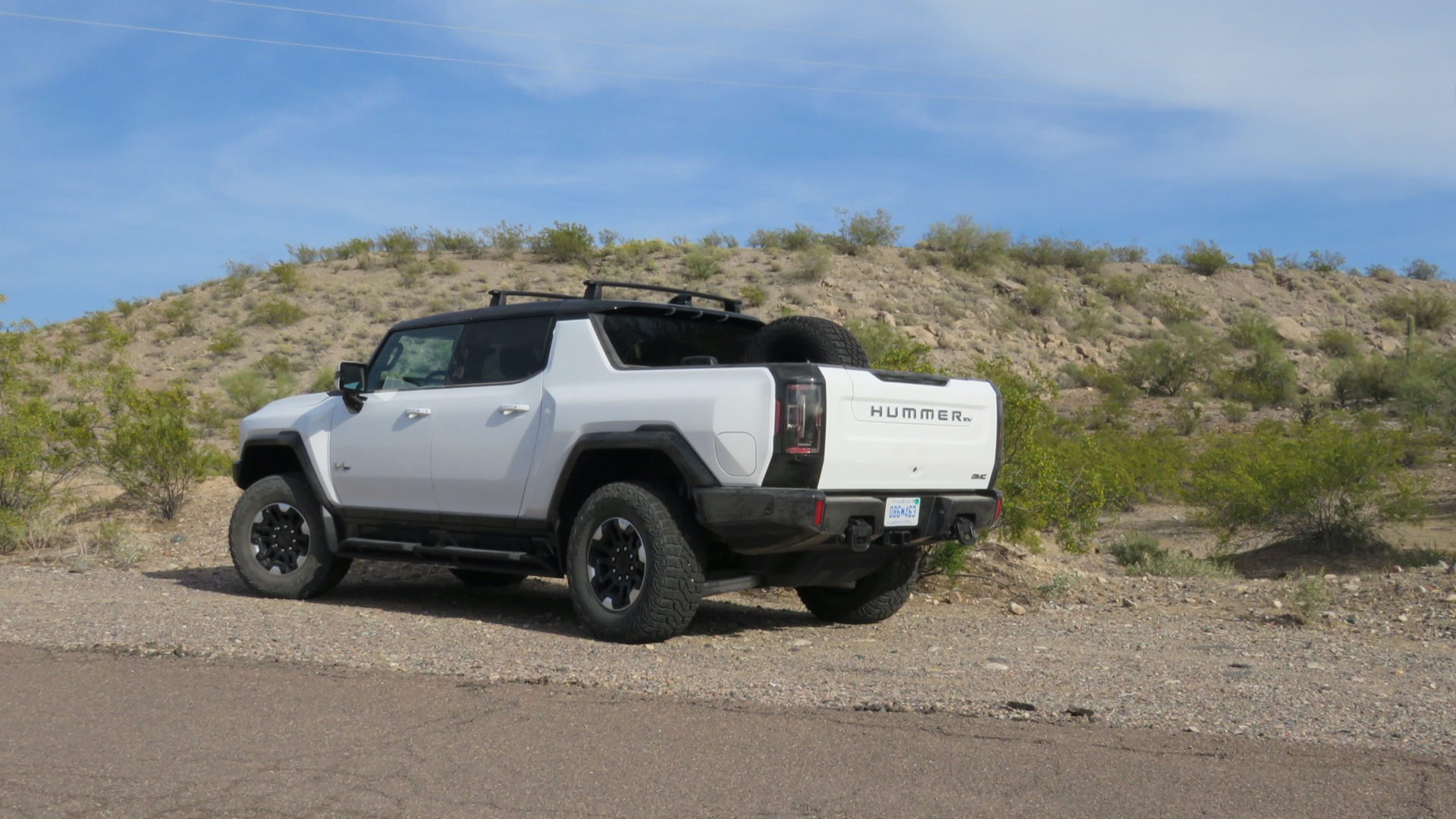 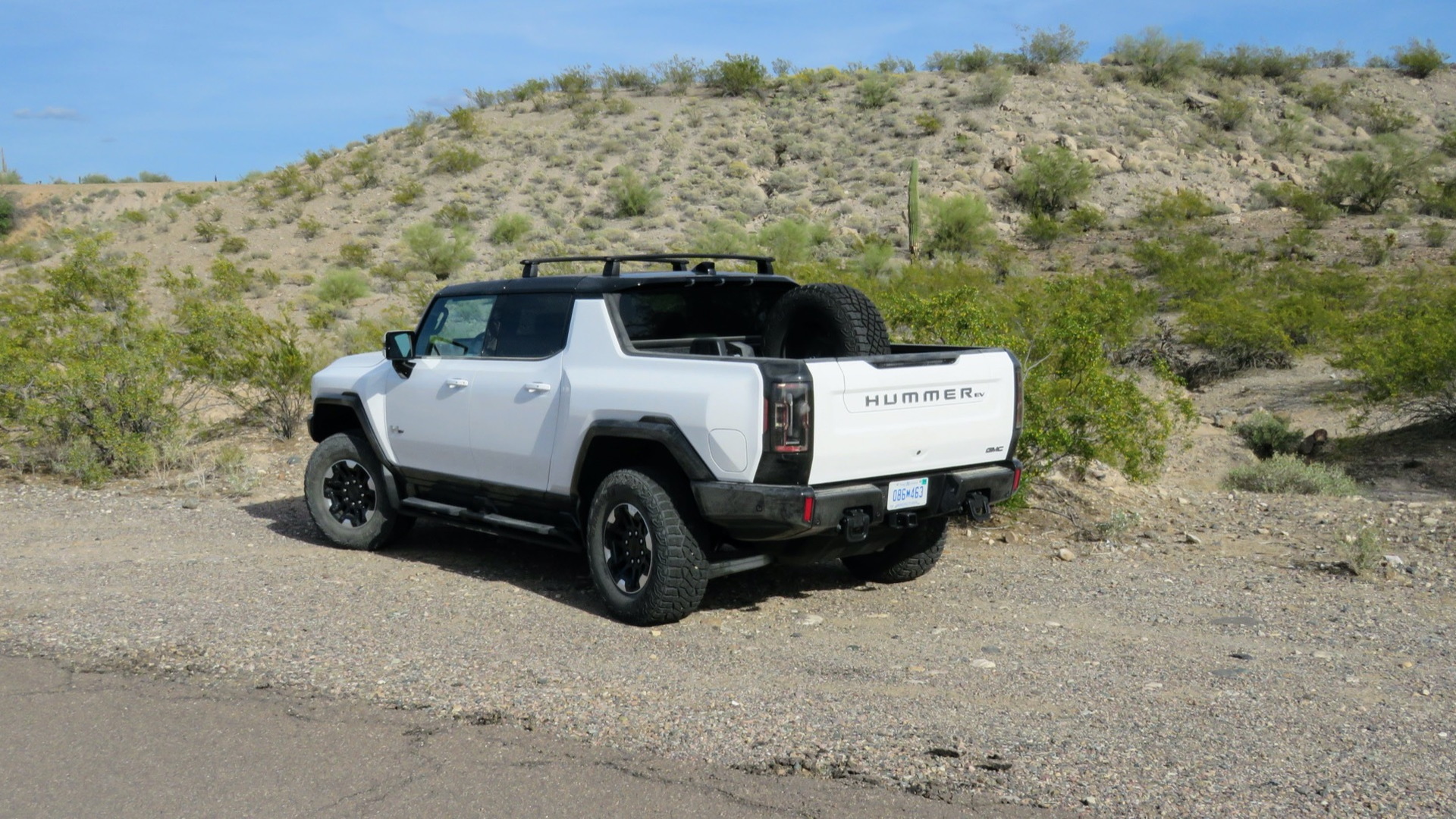 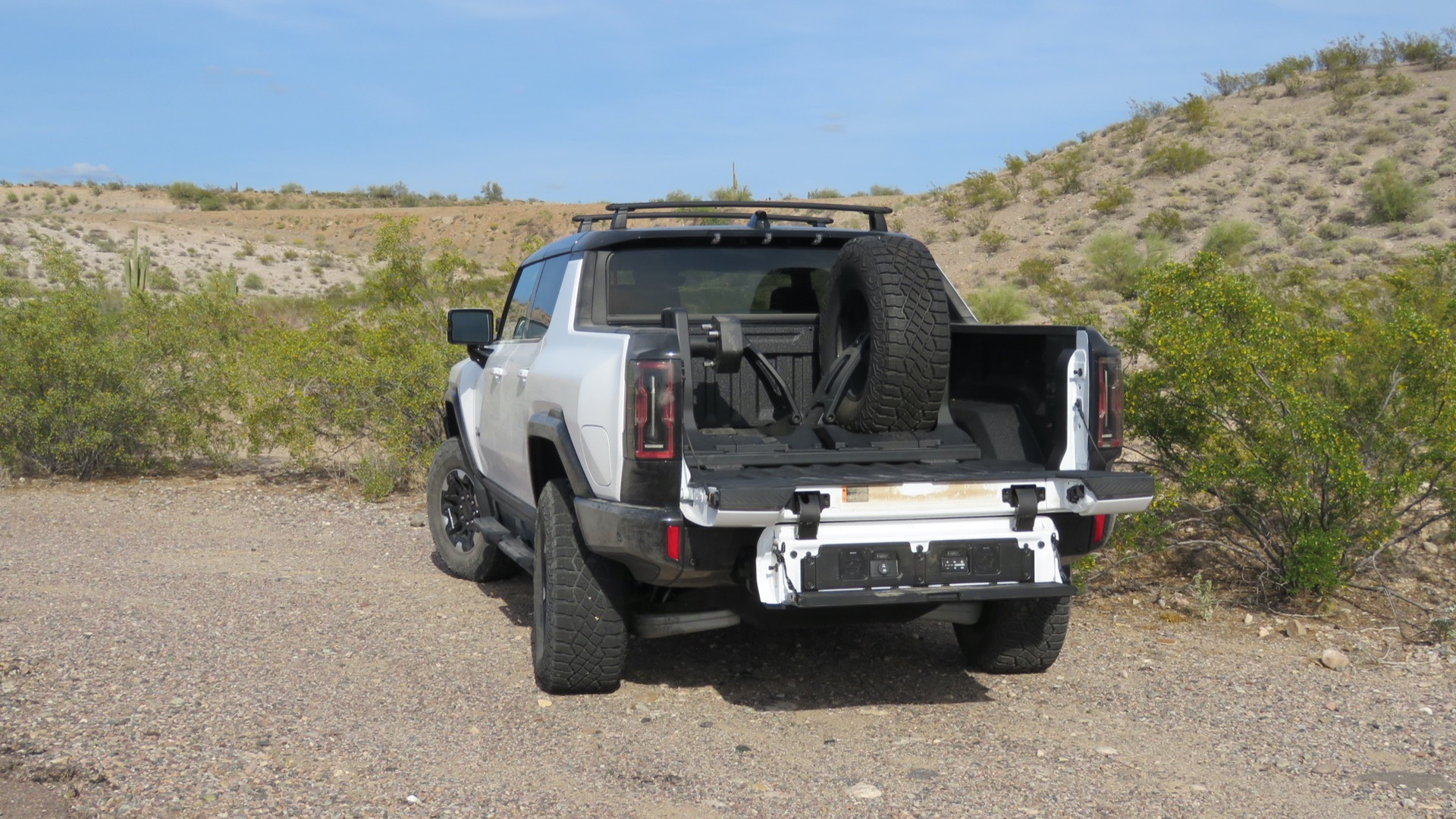 Electric vehicles are far too often a polarizing tag. The idea gets sifted away into a particular ideological bin before some get the chance to grasp the freedom it enables.

The same might be said of Hummer—the brand that was built on tactical charm and military heritage and then effectively dismissed by consumers over the trucks’ great thirst for, well, what Humvees helped fight for, right?

Even more so after driving the Hummer EV, I found this electric “supertruck” to be a boss move from GM in the tactical market sense, as it blurs the boundaries and will open up EVs to people who would never have considered Teslas or even Rivians.

It’s the electric truck for truck buyers, not the truck for EV buyers. Throw away the petty politics. Well played, GM.

A conversion to the new kind of Hummer-brand magic might be as simple as a couple of blasts past 60 mph in about three seconds. In WTF (Watts to Freedom) mode, the truck’s three motors add up to 1,000-hp and 1,200-lb-ft of torque to catapult the more-than-9,000-pound truck in physics-defying fashion.

Been there, done that in a Tesla or another high-powered EV? Doing so while sitting high, in a traditional truck form factor and with knobby off-road tires, is a different kind of experience. And WTF is a good intro to the Hummer EV’s outer-space and Marvel-inspired interface, powered by Unreal Engine. Yes it’s gimmicky, as it winds up to school you on how to launch for best results, but it also ties together the moon-landing theme of the whole vehicle, from the Sea of Tranquility on the speaker grates and hood applique to ‘H’-branded lighting and cartoonish Hummer-SUV profiles stamped onto some buttons.

The “moonshot”—and GM won’t let you forget that

This is GM’s “moonshot,” and the interface won’t let you forget. Neither will the simulated propulsion sound, which my drive partner summed as “duallie in space.” Think karaoke mic in exhaust pipe with reverb. After initial goofing around you’ll want to turn it off. Thankfully you can.

While the WTF-mode party trick, the interface, and the Hummer name might pull people in, thankfully there’s a lot more than that. In a first drive experience this past week around Phoenix, Arizona, I found the Hummer EV to be a solidly performing, off-road-focused truck. In a trail environment, the Hummer EV feels tough, maneuverable, able, with an unexpected level of finesse, especially considering its outsized proportions.

In the vicinity of 10 miles of off-roading over the course of the day, we tackled a mix of sharp, dusty boulders descending down to a gravel-covered “wash,” then up a narrow, rock-strewn trail to a hilltop. The first stretch was a test for the Hummer EV’s Terrain mode, which elevates ground clearance from the standard 10.1 inches up to 11.9 inches (there’s also a 15.9-inch Extract mode if things get gnarly); it also cranks up the brake regen for slow, gentle motions, and best of all, Terrain mode makes the accelerator a precision torque tool.

On an uphill, over a boulder, I teetered on the midpoint of one on the front right wheel, while the left rear wheel lifted, with my right foot, with the traction and drive systems giving me far more minute control than I’ve ever enjoyed with torque converters or clutches—thanks to a vivid traction system plus a front mechanical “e-Locker” differential and rear “virtual” locker.

Then in the wash, we used the center-console mode dial to select Off-Road mode, which allowed a perkier accelerator calibration and a looser stability control setting. Settling into a sweet spot of about 20 mph, I felt the surface through the steering wheel. It tempted us to whip this mammoth SUV around tight gravel corners—if only there weren’t bigger boulders and cacti around nearly every one.

Slowing and climbing the last bit to the hilltop, I appreciated selecting some of the 18 different camera views to check in on exactly where the knobby 305/70R18 Goodyear Territory MT tires were with respect to the edge of a dropoff. There were a few underbody bumps during the day, but GMC emphasized that this is a truck designed to take it. It’s the most demanding electric off-roading I’ve done, and this truck didn’t flinch.

If this were the only venue by which to judge the Hummer EV, we’d pronounce this King Truck and move on. But because GM’s positioning the Hummer EV as a pickup and all-around lifestyle vehicle—one that leads the way to a new family of electric full-size trucks—it deserves a sharper lens.

The Hummer EV is developed on an accelerated timeline on what the company calls a body-frame-integrated platform—different from the traditional body-on-frame underpinnings for its larger trucks. It essentially sandwiches a big dual-layer battery pack, protected with its own internal structure and stout frame rails, as part of the vehicle structure itself. It’s protected from the bottom with shielding, and on top it’s perfectly flat, allowing more potential flexibility with cabin design—although the Hummer EV sticks to a rather traditional layout.

The battery pack is essentially two packs—each 400-volt and connected in parallel most of the time but switchable to series during DC fast-charging to allow a higher charge rate. We haven’t charged the Hummer EV, but GM claims it has the ability to get 100 miles back—roundabout 65 kwh of pack energy, based on the EPA rating—in just 10 minutes on 350-kw CCS-format DC fast-chargers.

Across the pack’s two layers are 576 large-format NCMA pouch cells, adding up to 205 kwh or 213 kwh depending on the standard for calculation. Its 24 modules check in via a wireless battery management system, which GM says is an industry first.

The Hummer EV rides on a four-wheel independent suspension, with a control-arm layout at each wheel plus the application of a Continuous Damping Control (CDC) air suspension, much like what’s used in the GMC Sierra and other full-size GM trucks. Its amazing maneuverability in off-roading is made possible by a rear-wheel steering system, which turns the wheels opposite the fronts at up to 10 degrees at lower speeds, phasing that out by 25 mph and turning them slightly with the front wheels at higher speeds. The latter is something I had a much harder time detecting, given how this beast lists in higher-speed corners no matter what.

Feeling its way on cabin refinement, but lots of great details

Expanding on that, don’t expect the Hummer EV to transcend the laws of physics on-road, at higher speeds. On arrow-straight, mostly smooth highways around Phoenix, we had to invent our own corners, and found that there’s a lot of lean—as you might expect for any vehicle weighing this much. The knobby, big-sidewall tires make their own hum at highway speeds, and some air turbulence around the front pillar becomes ever-present around 75 mph. The Hummer EV doesn’t quite sweat the NVH details quite yet. GM has the potential to enable active noise cancellation in a future version of the truck, which packs high-end Bose sound, and this would be the perfect application for the tech.

It also doesn’t feel as space efficient as you might expect for such a large truck. Although there are smaller storage spaces at the center console and throughout the truck, I found the seating position in back to feel quite low—and close to the front-seat position, even though there’s a lot of width in the cabin and room for three in back. In front, on the other hand, there’s lots of seat travel, and I could easily locate the corners of the vehicle without camera help—a great asset in an off-roader. And the door and trim materials inside—looking like fabric but wipeable and brushable—are a thoughtful touch.

The Hummer EV Edition 1 also comes with Transparent Sky Panels—cool removable panels that allow you to essentially turn the truck into a convertible, fitting them cleverly into the frunk.

The Hummer EV, which has in the past been called the SUT, is a pickup, with a max payload of 1,300 pounds and a max tow rating of 7,500 pounds. With the Multi-Pro tailgate function, the Hummer EV can boost the effective load length for long items to 6-foot-10; and it’s compatible with a range of accessories—like in the truck we drove, a carrier for two extra tires, one of which we used.

A somewhat shorter SUV is on the way and may allocate space better for those who aren’t hauling outdoor gear all the time.

Efficiency (or lack thereof) as we thought. But it gets better from here.

And yes, the Hummer EV lives closest to its namesake from the past in that it’s probably the most inefficient EV yet. As I’ve outlined in the recent past, that’s probably beside the point.

That said, our test truck’s trip computer showed an average of 1.3 miles per kwh over more than 500 miles; and our own trip results—when we remembered to zero it, including about 65 miles and maybe 10 miles of low-speed off-roading—added up to 0.9 miles per kwh.

GM’s Super Cruise driver-assistance tech is included in the Hummer EV, and it worked perfectly for me—even pulling off two cautious but flawless lane changes with a flick of the turn-signal stalk.

The Hummer EV Edition 1 I drove costs $110,295, including a $1,595 destination charge. GM has so far delivered about 100 of them, making them a very rare, limited-edition vehicle—more so than many supercars. Yet GM reported last week that it’s past 66,000 reservations on the Hummer EV, so the pace will accelerate.

GM is starting at the top. There will be light-duty versions of this heavy-duty “supertruck” that aren’t quite as super—without the big double-layer pack, with only two motors rather than three, without the Sky Panels and, even eventually, without the adaptive ride suspension.

But to push the point, that’s the aspirational strategy that has worked for legacy automakers like GM for decades. Turn heads with the top-performance model, sell the other versions in volume—and start emulating the flagship in affordable, more efficient models.

If GM can entice a new crowd with WTF mode and Crab mode and other truck tricks, and then hook them on fully electric, who’s the wiser?