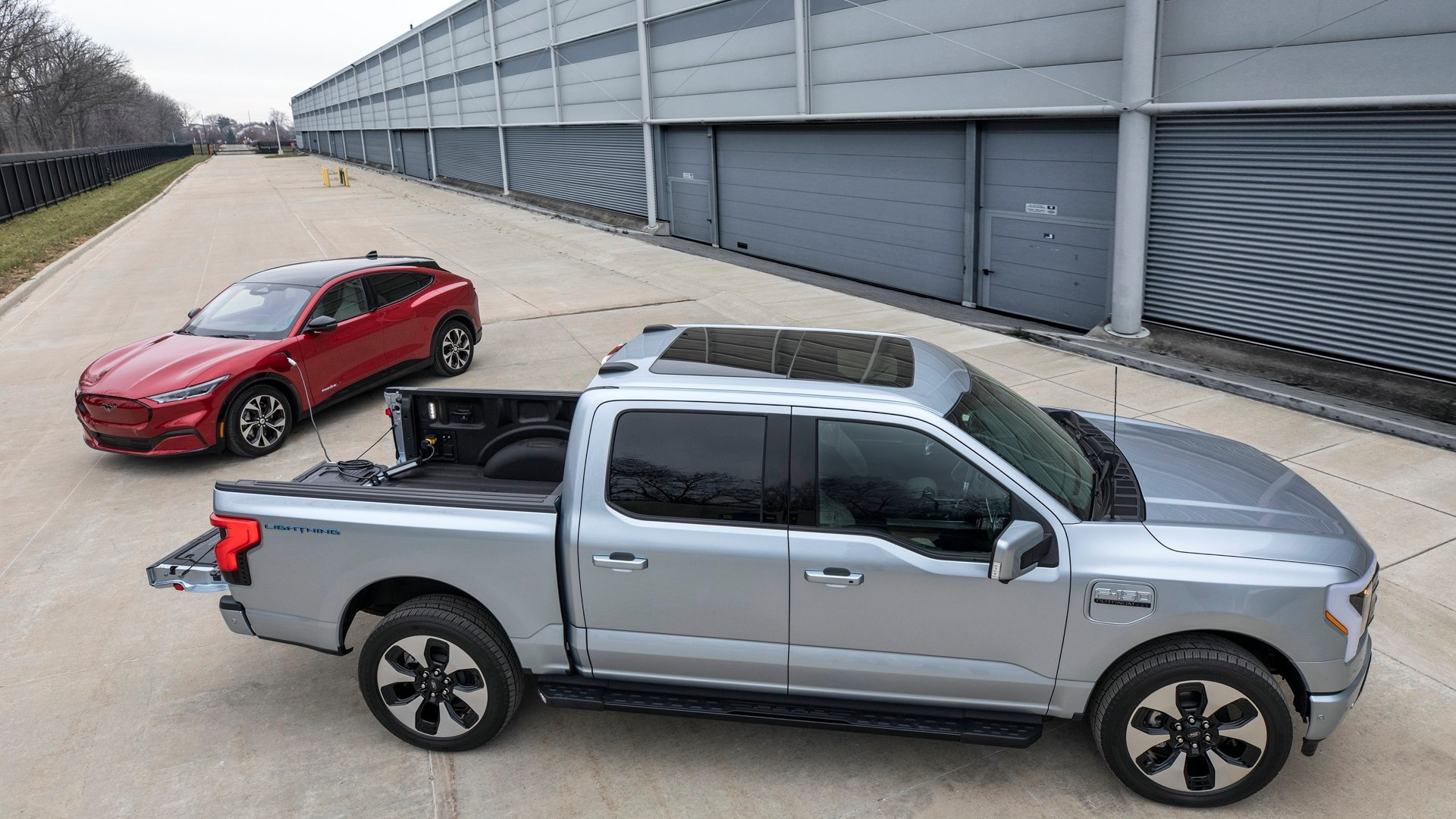 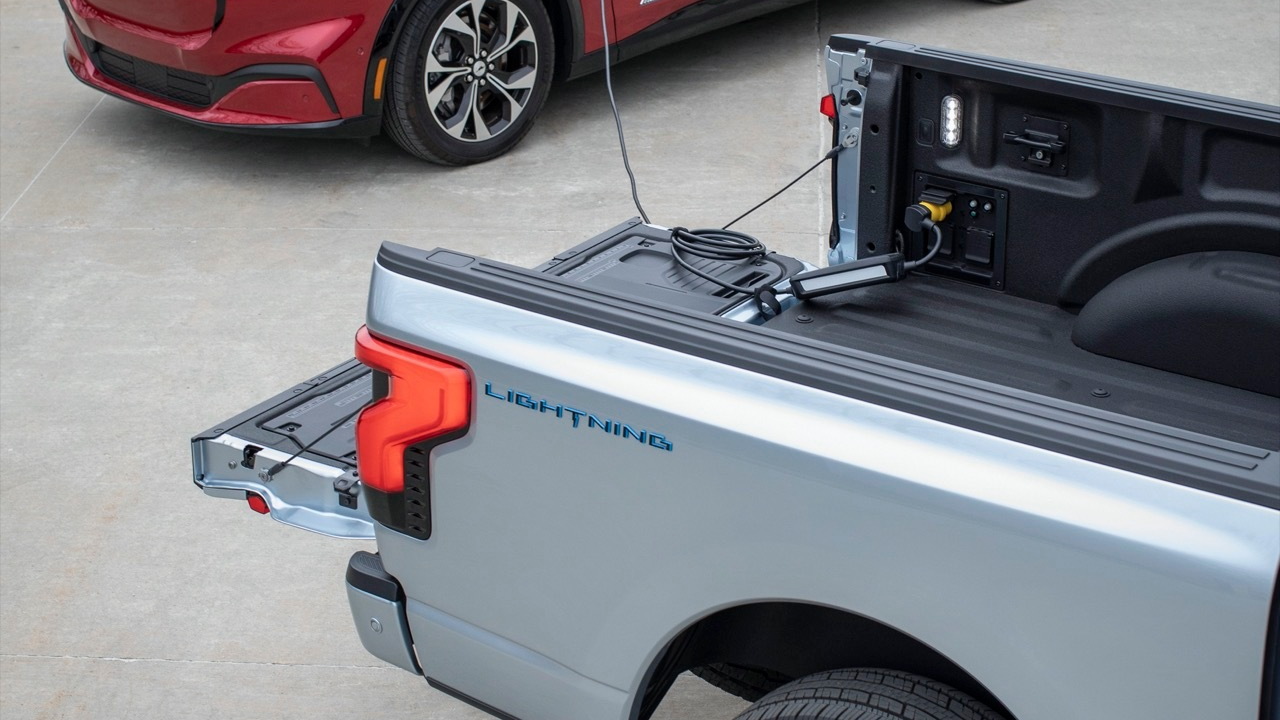 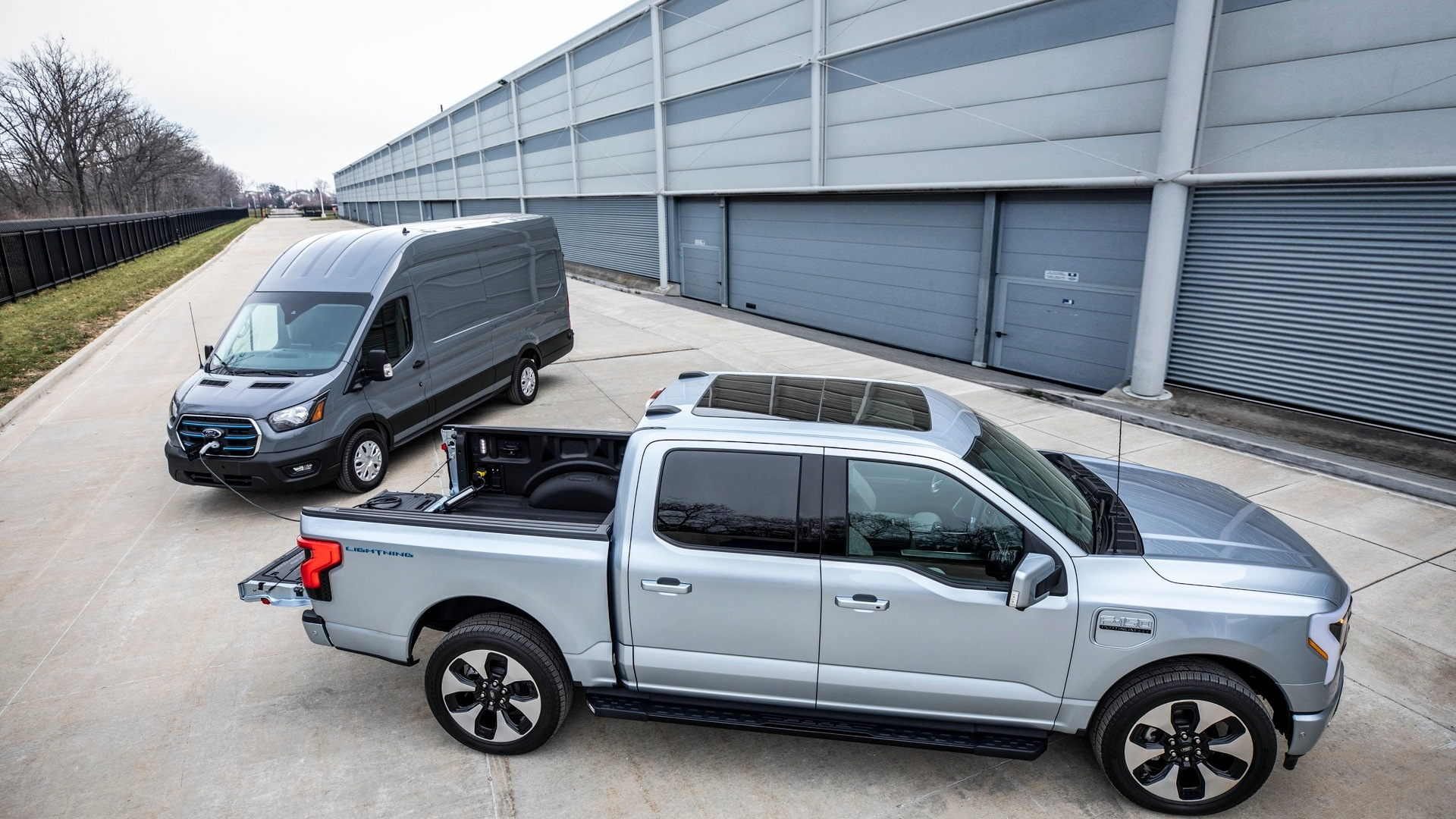 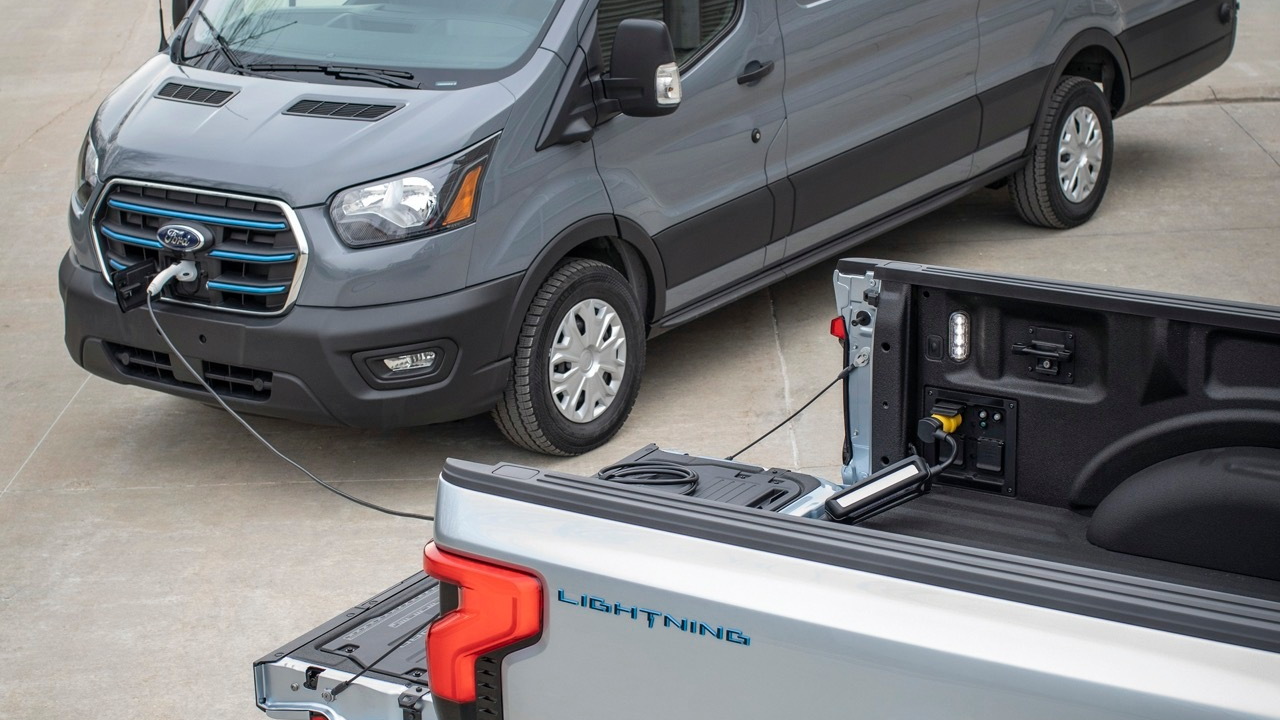 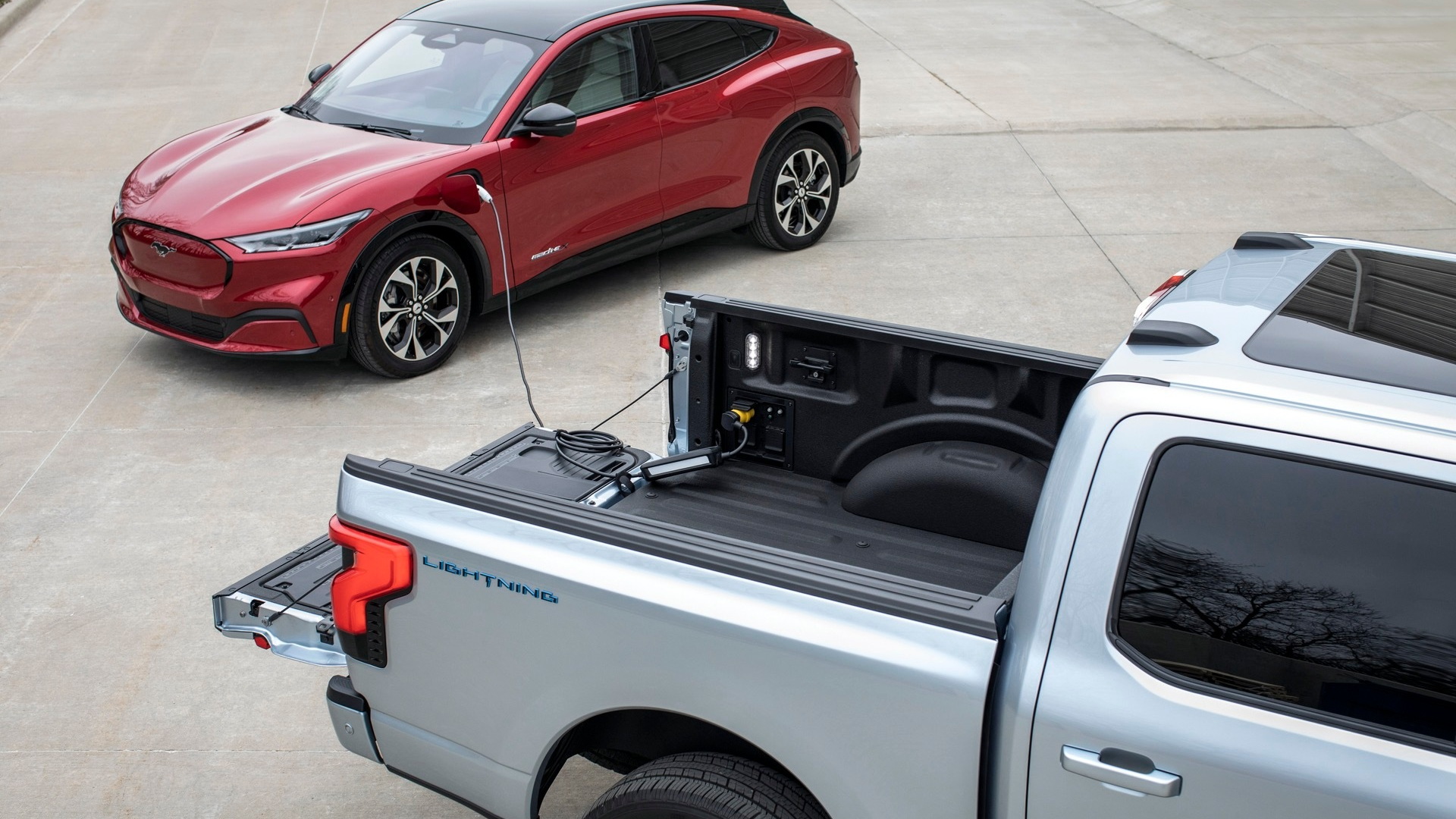 If you’ve lived around an electric vehicle, you know that flexibility is key. While daily charging at home or at road-trip stops covers most needs, what if friends or family with EVs could lend a few miles to you in a pinch?

That’s where something in the ability set of several upcoming EVs might come in very handy: their potential to rival standalone gasoline-powered generators, and reliably provide enough power, for long enough, to charge up another EV.

It’s something that the upcoming Ford F-150 Lightning electric pickup (or the F-150 Hybrid) can do, with their Pro Power Onboard feature. They can produce up to 7.2 or 9.6 kw—enough to give a Mustang Mach-E 20 additional miles of range per hour, or an F-150 Lightning 13 miles per hour.

As Ford points out, those Hybrid or Lightning drivers can plug an EV’s mobile charging cord into Pro Power Onboard’s 240V outlet. Then most smaller EVs with such a cord might be able to take advantage of full (or nearly full) Level 2 charging speed.

Or, if you only have your 120V charge cord, you’ll be able to plug that into Pro Power Onboard’s 20-amp, 120-volt three-prong outlet, providing Level 1 charge rates that might give you a few miles an hour—which might be all that you need to get to something faster. And with four electrical outlets in the F-150 Lightning’s frunk you get up to 2.4 kw of power, which means you could split the total up among charging an EV and running some tools.

Ford isn’t the only vehicle maker teasing such a feature. The first one to offer it in the U.S. market will be the Hyundai Ioniq 5. Its Vehicle to Load (V2L) feature will supply 3.6 kw of continuous power

Future accessories to connect to a home energy ecosystem will allow access to its full 3.6 kw, but it can supply 1.9 kw peak power (about 16 amps) through its 120V outlet—essentially allowing a full rate with most charging cords.

Both models have bigger aspirations about what to do with the power. As Ford outlined with the reveal of the F-150 Lightning earlier this year, it will be one of the first electric vehicles to take advantage of bi-directional charging in the U.S. market—effectively enabling households to use the electric truck as a gigantic power bank that might be used as emergency power, or as an energy buffer with solar, on the way to greater energy independence.

Ford points out that, as part of the company’s forthcoming Intelligent Backup Power system, the feature is enough to power a home for up to three days in a power outage. Taking full advantage of that will require an 80-amp Ford Charge Station Pro, a home energy management system, and an inverter, which Ford plans to bundle together. But to output that power for EVs, appliances, or camping, you only need Pro Power Onboard.

Hyundai meanwhile has said that solar will be part of its Hyundai Home service, integrating charging, solar, and energy storage and including "one of the best warranties in the industry," just like the cars.

Tesla doesn’t yet offer this functionality from its vehicles, although we’ve seen teases of it in the first vehicles that are now being delivered from Rivian and Lucid.

They’re not the first. The Nissan Leaf, with its CHAdeMO fast-charging interface, was nearly ready for such tasks from its launch, more than ten years ago. Although home energy systems were offered for the Leaf officially in its home market of Japan and on a pilot-program basis in Europe, Nissan never made this functionality accessible to Americans, but some independent companies are now pushing ahead and using it.

A decade ago, AAA started investing in trucks that could provide emergency charging to EVs, expecting that amid reports of range anxiety, it would be a popular service. But they found, surprisingly, that EV owners seldom got stranded. With this casual way to gain just a few miles from another EV, an extra little bit of flexibility might go a long way.