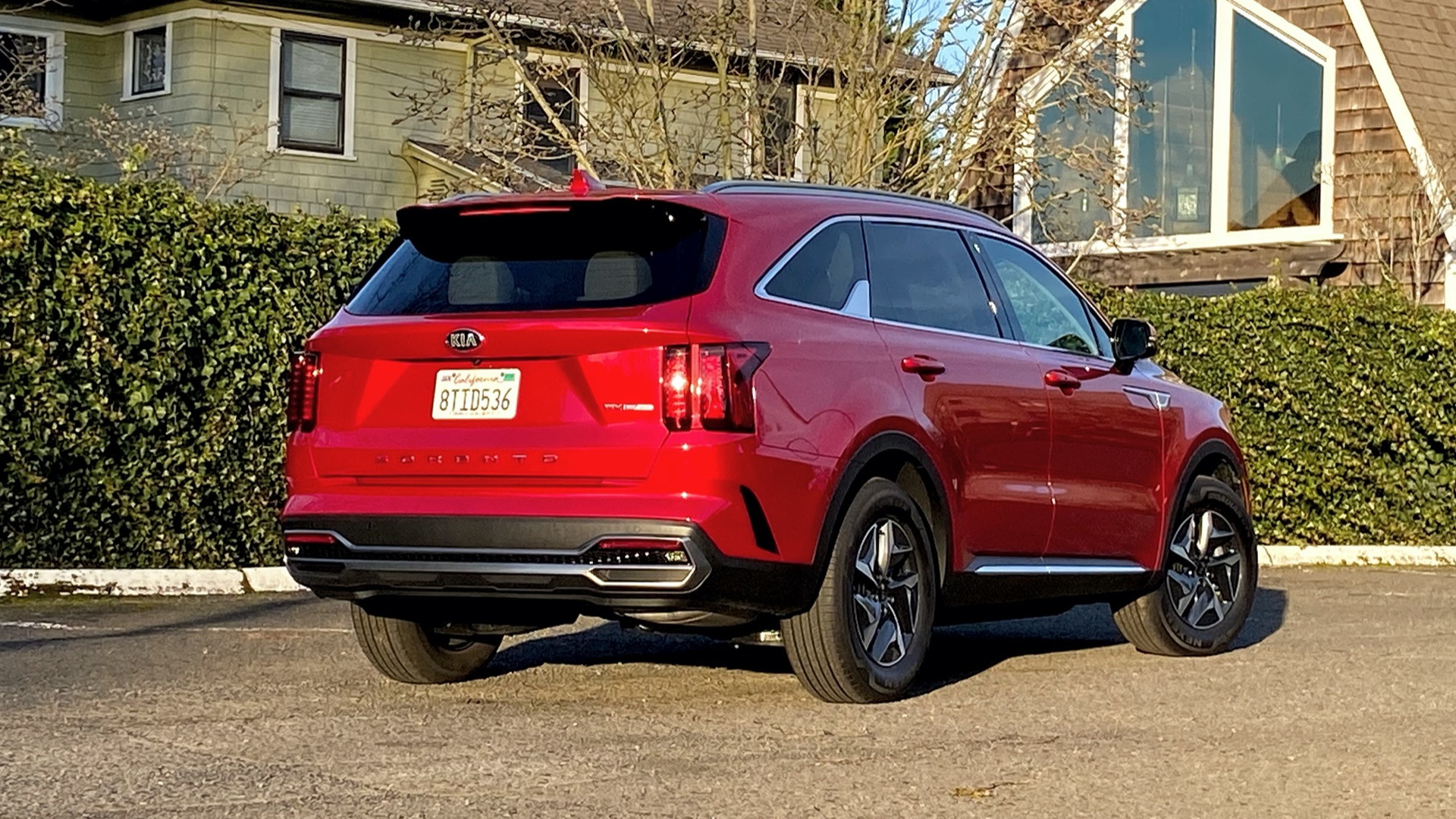 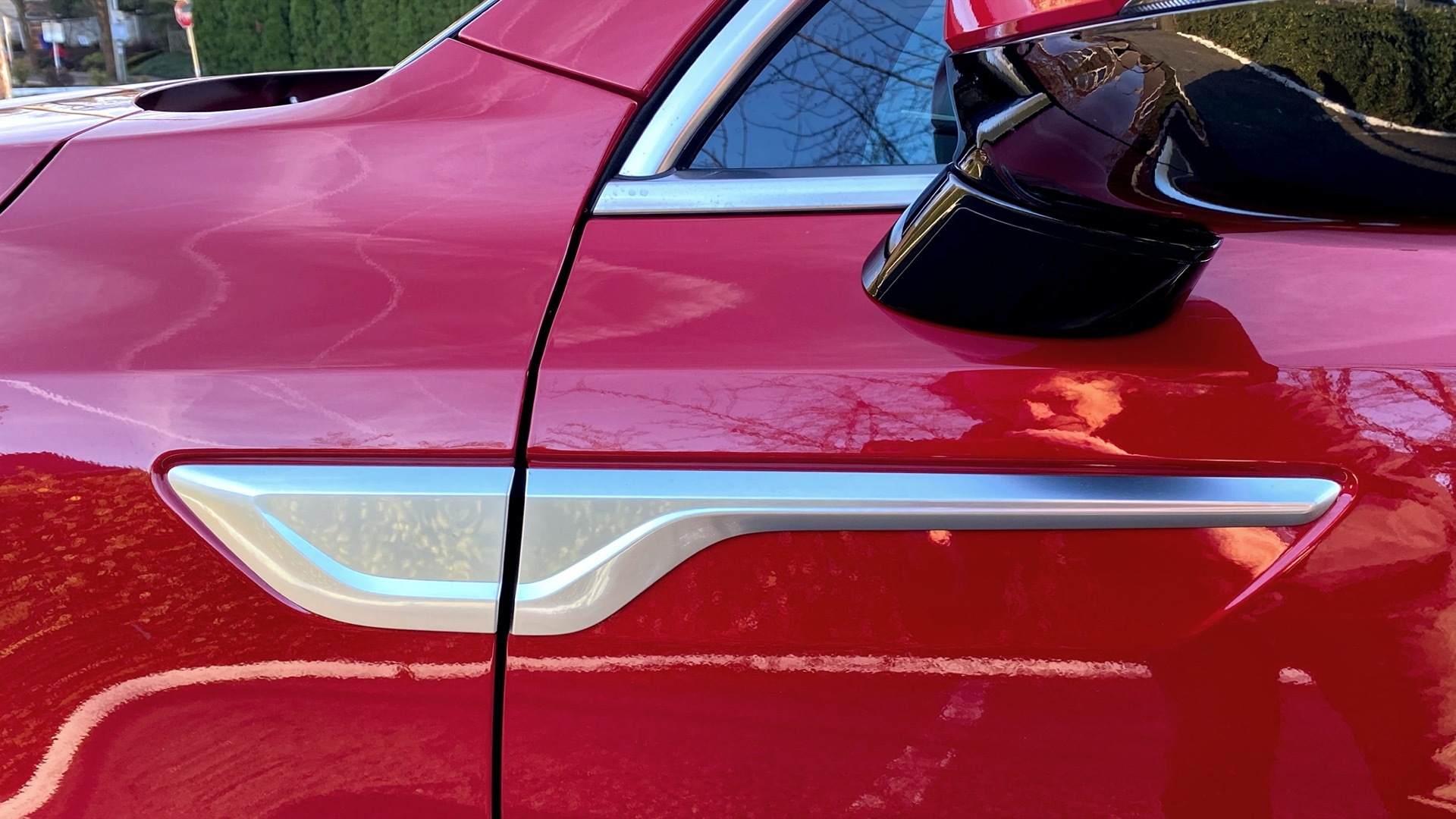 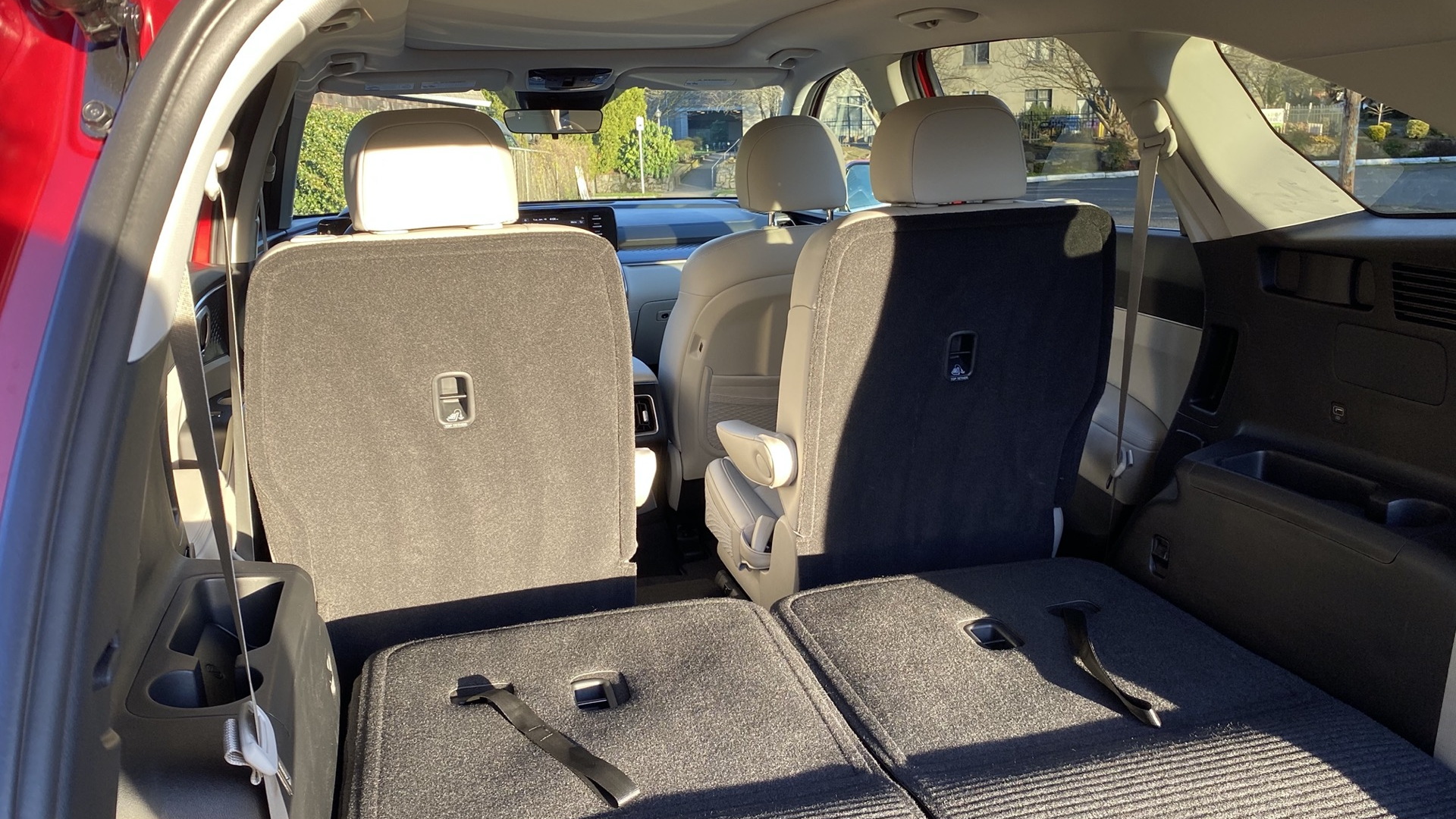 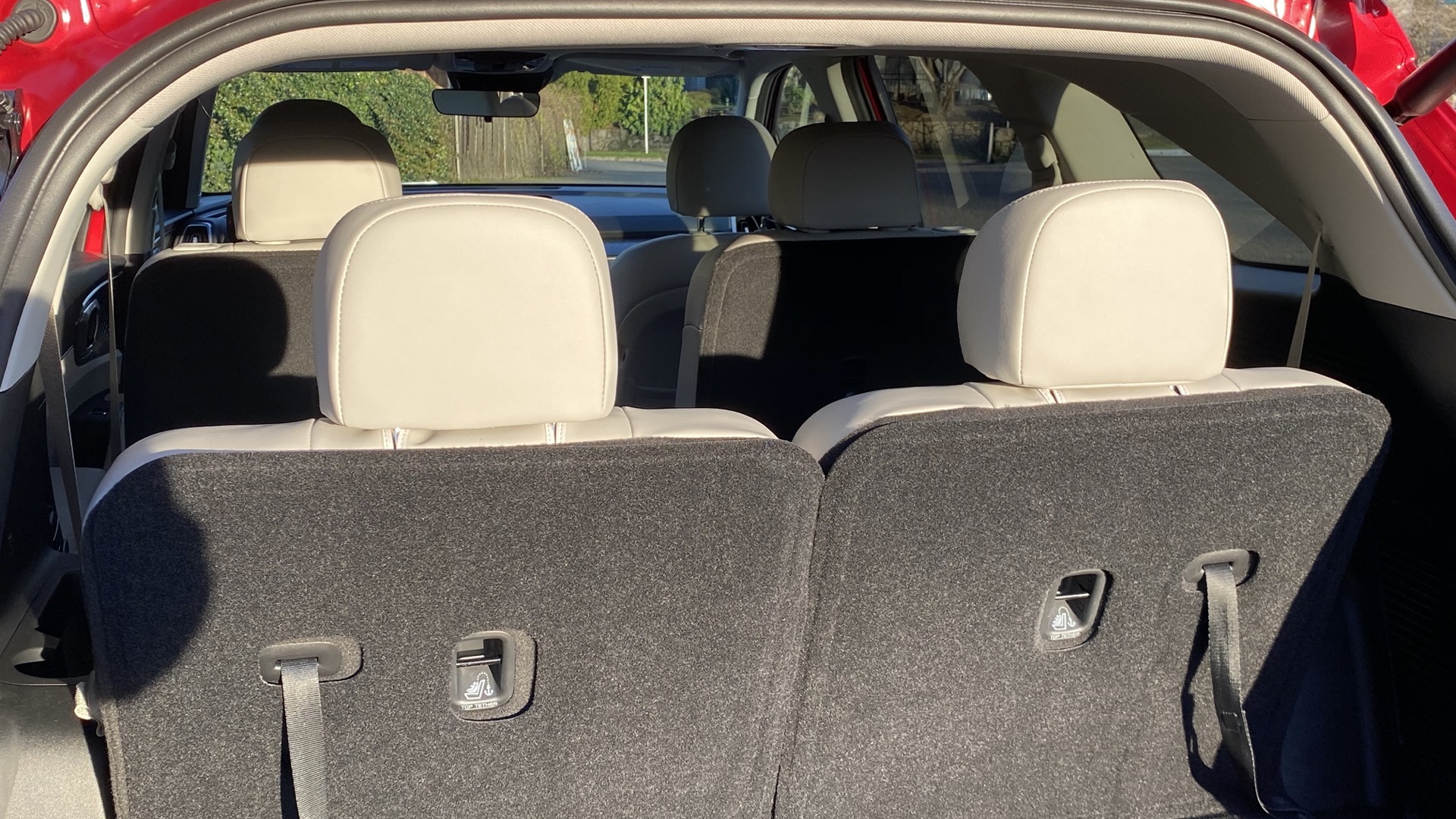 With the 2021 Sorento Hybrid, Kia delivers plenty of good reasons for us to choose its modest mid-size family crossover: a jaw-dropping 37-mpg EPA combined rating and a sub-$35,000 starting price, for a vehicle that seats six.

In a recent first drive of the Sorento Hybrid, I found it to cover the expected bases, with a responsive, well-coordinated hybrid system, decent handling, and features and materials that fit what people will expect for the price tag. 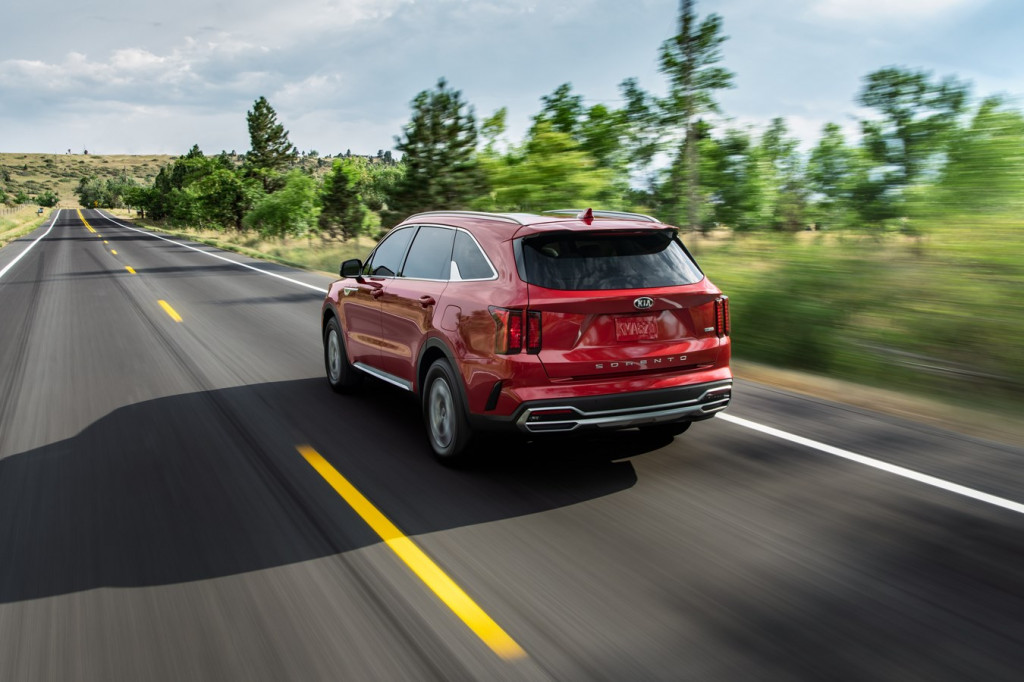 It appears to deliver on the mileage it claims, too. Over nearly 80 miles of mixed-driving conditions—including some stop-and-go on 40-mph boulevards, some 55-mph and 70-mph highway cruising, and a bit of exuberant driving on a back road, the trip computer indicated an average of 37 mpg.

To get a benchmark, I also took the Sorento Hybrid on a 53-mile out-and-back loop that I’ve taken a number of other hybrids on. It includes a slower freeway route, some suburban boulevards, and rolling country backroads, and goes from 300 feet to 1,000 feet elevation and back. Here I averaged 39 mpg—and should note that the temp was a chilly 40 degrees.

The hybrid system that Kia and Hyundai have been developing and refining for more than a decade is really at its best in this vehicle. It’s smooth and responsive, and delightfully unobtrusive in the way it trades off power sources. The turbo-4 drops out of the mix even occasionally in gentle highway-speed cruising. 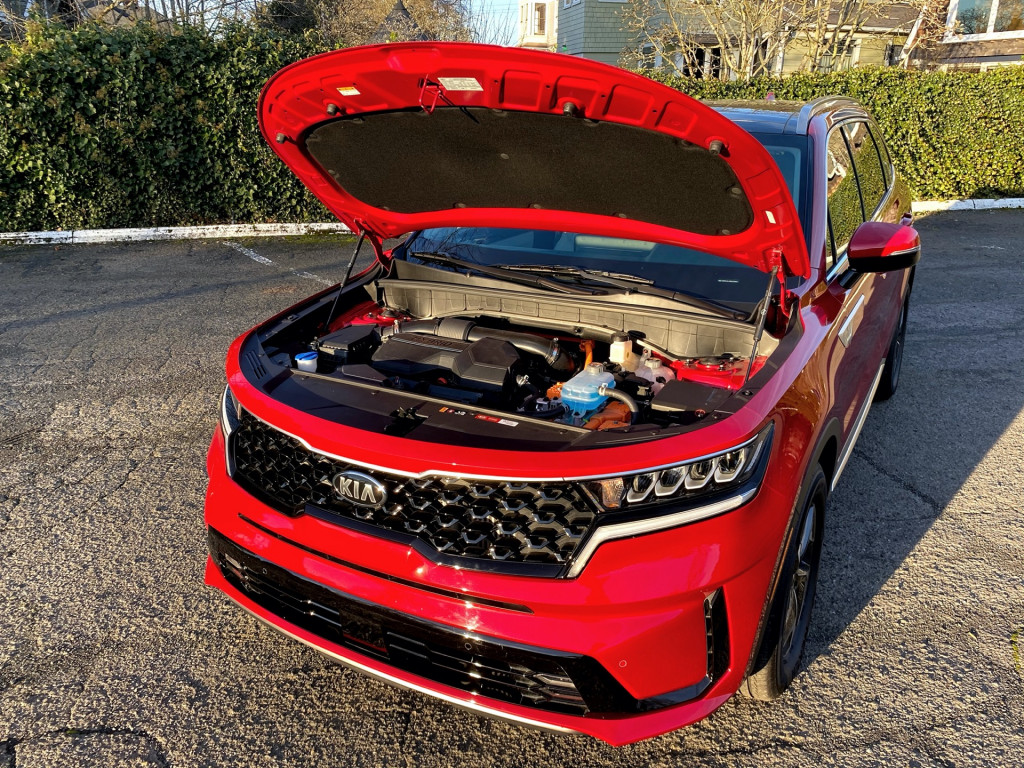 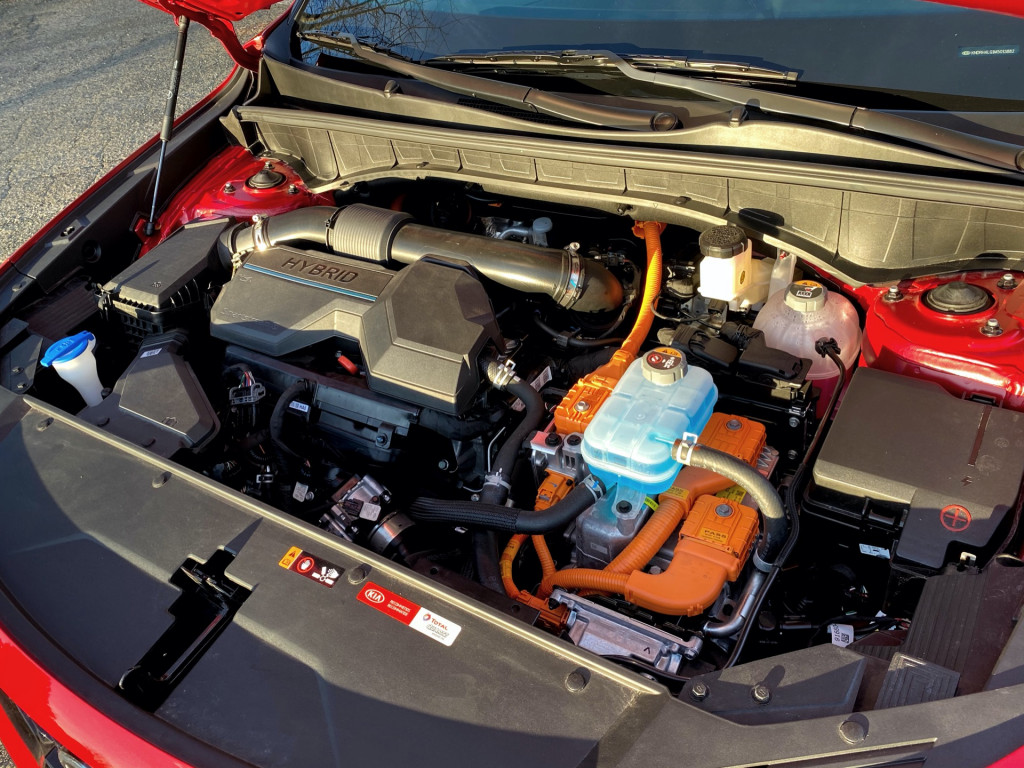 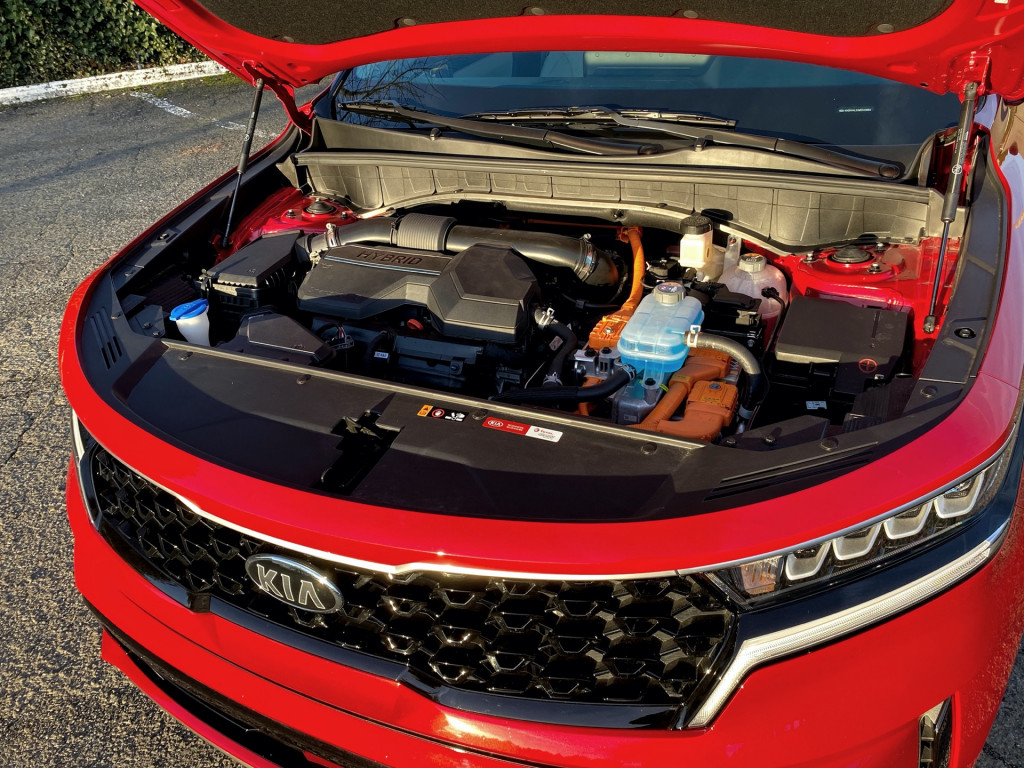 It’s smoother and has better drivability than the system in the Ford Explorer Hybrid, and less of the rubber-band-like delay to the quick acceleration I’ve noticed in the Highlander Hybrid. Pull the left steering-wheel paddle and you get a nice, predictable downshift on command. And there’s none of the uneven brake blending in the last stretch of a stop I’ve noted in previous Kia hybrid efforts like the Niro.

The Hybrid is front-wheel-drive only, while the Plug-In Hybrid that will arrive later this year has all-wheel drive. In the Hybrid, a 1.6-liter turbo-4—making 177 hp and 195 lb-ft of torque—is supplemented by a 59 hp (44 kw) electric motor geared directly to the input shaft of the transmission, with a clutch system capable of disconnecting the motor for electric-only operation in gentle low-speed acceleration or for short distances when cruising. A 1.5-kwh battery pack captures energy when braking or coasting and releases it when it aids efficiency.

Altogether, the powertrain makes 227 hp and 258 lb-ft of torque. The official 0-62 mph time is 8.6 seconds, but in a brief, informal test it appears to be closer to seven seconds. Kia hasn’t accounted for the big disparity, but the hybrid system bogs down for a moment if you just floor the accelerator from a stop—behavior that you can bypass by momentarily pressing the accelerator and brake at the same time. 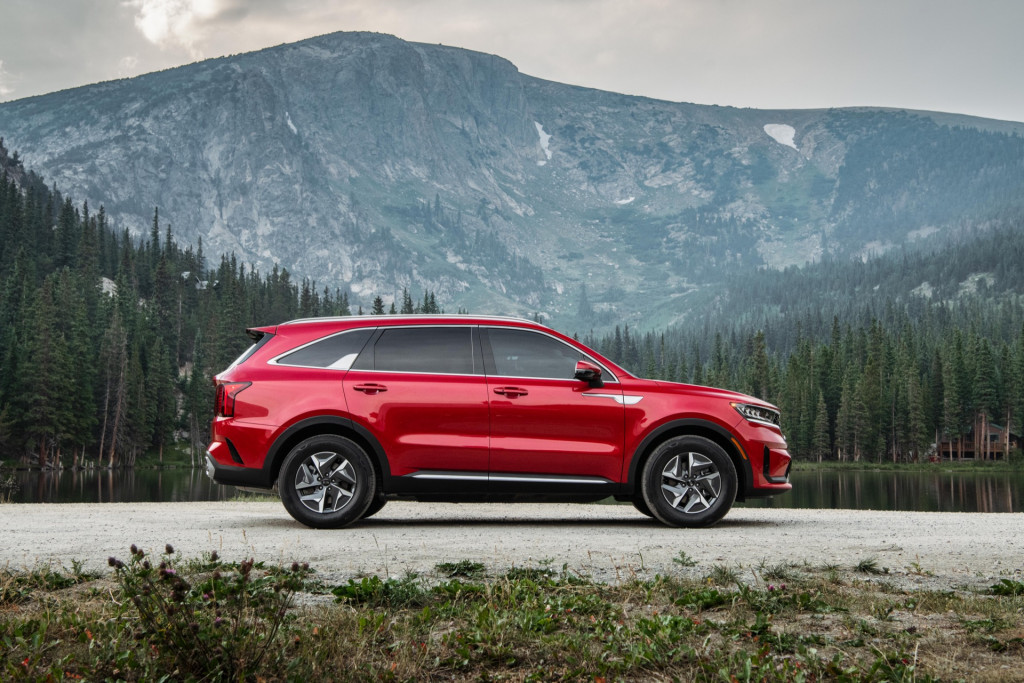 The rack-mounted electric power steering tracks reasonably well, and it weights up off-center in a more reassuring way than what I’ve observed in a number of supposedly sportier cars from Hyundai and Kia. The steering felt more relaxed—in a good way—in its base Comfort mode, with an artificially firmer feel in Sport mode, accompanied by sharper, less linear accelerator responses but no heightened performance, from what I could tell.

The way the Sorento handles on a wide range of roads is commendable—not entirely sporty for this EX Hybrid, but fluid in tight back-road esses where the vehicle’s 4,000-pound curb weight might otherwise become a limiting factor.

Making sense of its position in the market

The Sorento Hybrid might have the high roof and high seating point of a crossover, but it’s not really meant for the trail; its 6.9 inches of ground clearance are nearly an inch less than that of a Subaru Outback. It’s not for towing either, with a maximum capacity of 1,654 pounds. The curb weight of the Sorento Hybrid starts at just under 4,000 pounds.

Kia says the Sorento fits into “a segment of one,” with rivals that span from the Ford Escape and Honda CR-V all the way up to the Ford Explorer. But in dimensions and the overall feel of the vehicle, it’s much closer to the Explorer and the Toyota Highlander. 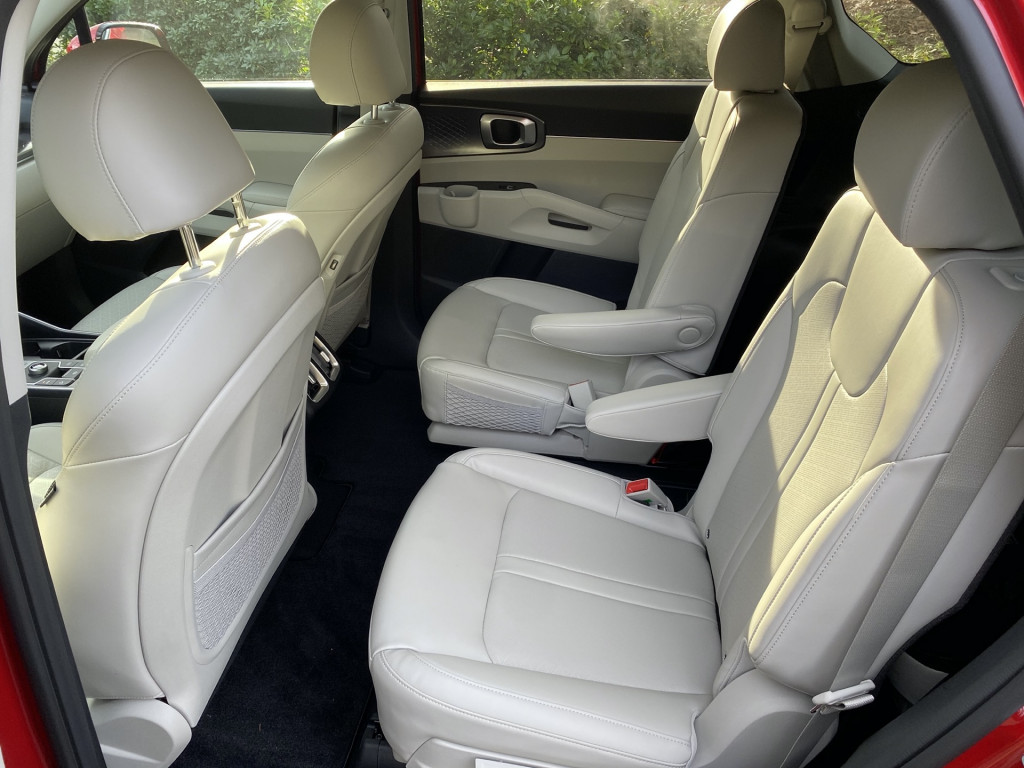 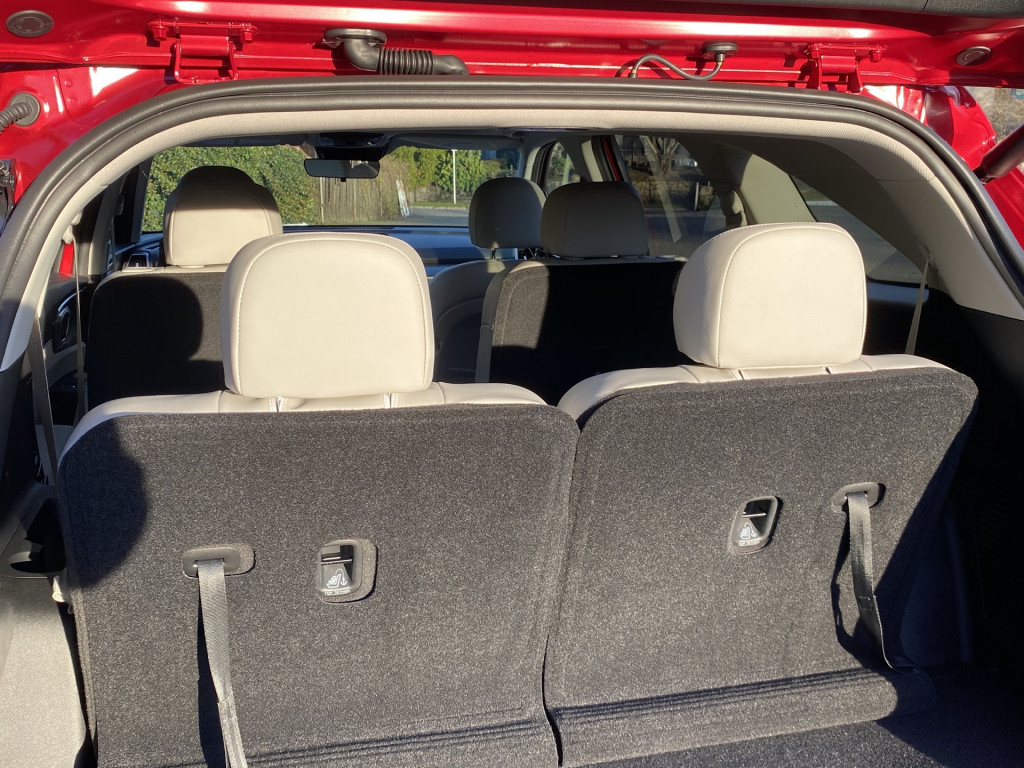 To bring in some other comparisons, it’s within an inch in overall length of the Honda Passport and Jeep Grand Cherokee, but it packs three rows in like the Honda Pilot, Ford Explorer, or Toyota Highlander which are all 6-12 inches longer.

The cabin feels like a nice midpoint between the more upright cabin layout in the Telluride and Grand Cherokee and the more relaxed, lower-greenhouse layout of the Toyota Highlander and Ford Explorer. The Sorento’s cabin, like that of the Toyota Highlander, feels a bit shorter inside than you might expect it to be on the outside. Despite that, the Sorento feels more spacious in the first two rows because of seat placement.

The Sorento’s third-row seat is possible for adults only if you’re okay being a contortionist. I’m 6-foot-6, and I had barely enough head room and was staring at my kneecaps.

Letdowns: the look, the feel, the NVH

What isn’t as good as the outgoing Sorento? Ride quality. The 2021 Sorento is lacking the Mercedes-like heft and vaultlike feel of its predecessor (and of the Telluride). NVH—that’s noise, vibration, and harshness—is also a big letdown, with the road-noise din at highway speeds on coarser surfaces prompting me to turn the sound system way up. The Explorer Hybrid and Highlander Hybrid are both superior.

Kia has one other problem of its own doing, though. The Kia Telluride, which unanimously won our editorial group’s Best Car To Buy 2020—my vote included—is brimming with rugged style and with a level of refinement and sophistication that make it feel like a Land Rover at less than half the price. The design is calm and cohesive, and oozes upscale. Nearly two years after its bow it’s still commanding premiums at the dealership and is one of the trendiest mass-market family rides of the decade. 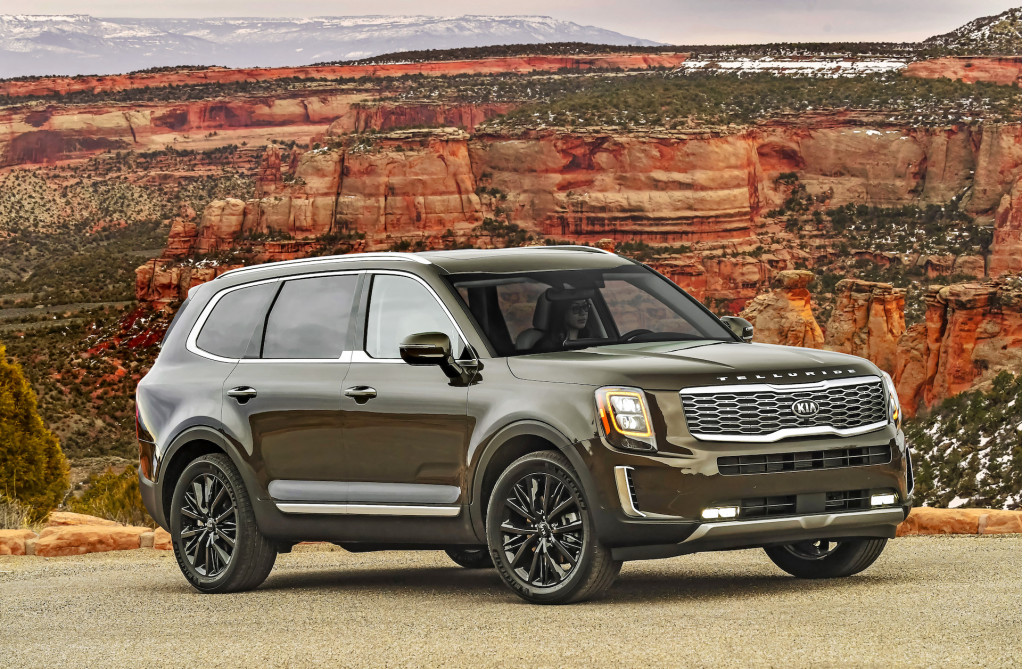 The new Sorento’s suit follows a familiar profile on the outside, but it’s dressed up with a couple of chrome pocket squares and a hint of the Telluride’s chiseled look at the lip of the hood. Narrow four-beam headlights, plus some vertical taillights that clearly hark to its bigger sibling complete the look. 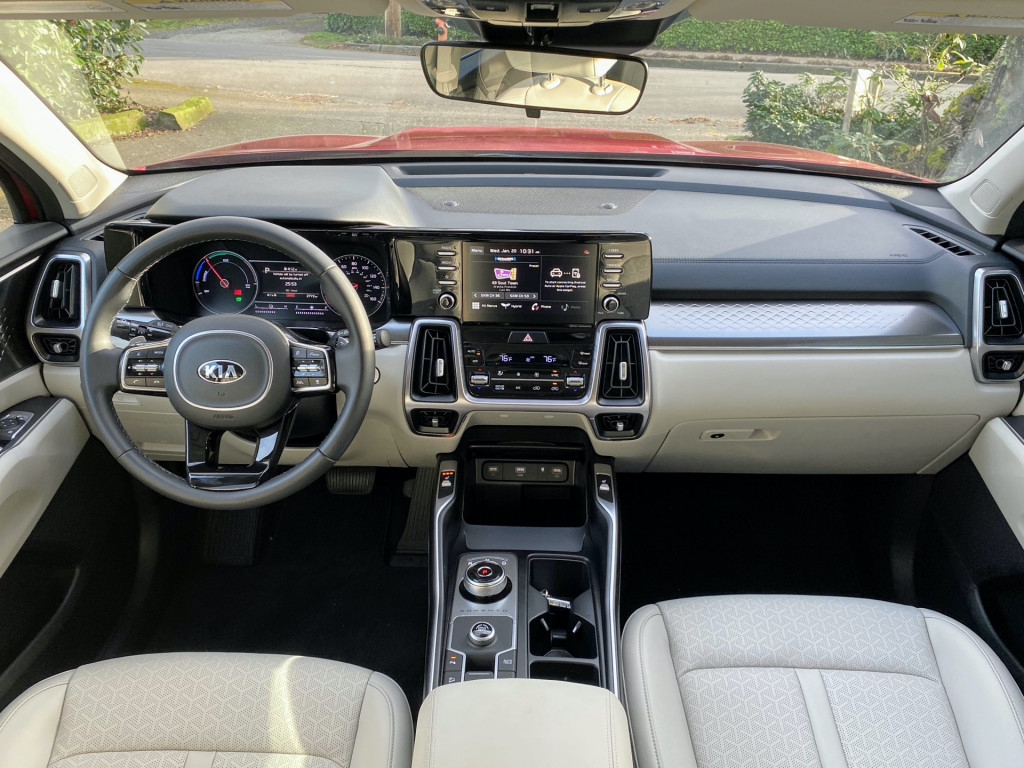 Inside, the Sorento Hybrid is just too visually busy, with a cluttered look that extends from the weird air vents and center stack—they look like game controller, a colleague aptly says. The visual clutter includes “3D embossed” trim alongside the doors, and multiple textures and surfaces converging where the outer curves of the dash meet the door trim. It’s too much, and it’s unnecessary.

Why not just make the Sorento more like the Telluride? I asked about the disconnect, and Kia Motors America responded that although both the new Sorento and the Telluride were designed in California, they didn’t just want to create a baby Telluride. Instead, they aimed to give the Sorento its own personality. While Telluride is bold, boxy, even stately, the Sorento aims to be more athletic, they explained—and more dynamic, which the zip ribbons of chrome are supposed to communicate.

Mixed messaging and a missed opportunity

After driving the Sorento Hybrid for a little over a day, I’m convinced that Kia will stoke some new interest in the Sorento with this hybrid version, which offers satisfying performance and from what I could tell, all the fuel-efficiency the ratings suggest. But weeks later, the premise behind this remake of the Sorento doesn’t make sense next to the model that’s been appropriately termed by some colleagues as Kia’s golden-egg-laying goose.

Kia is aiming to sell up to 25% of its Sorentos as Hybrids this time around—nearly the ratio Toyota manages for the Highlander and RAV4. While the Highlander Hybrid and Explorer Hybrid —and non-hybrid versions of the Sorento—are made in the U.S., Kia assembles the Sorento Hybrid in South Korea. 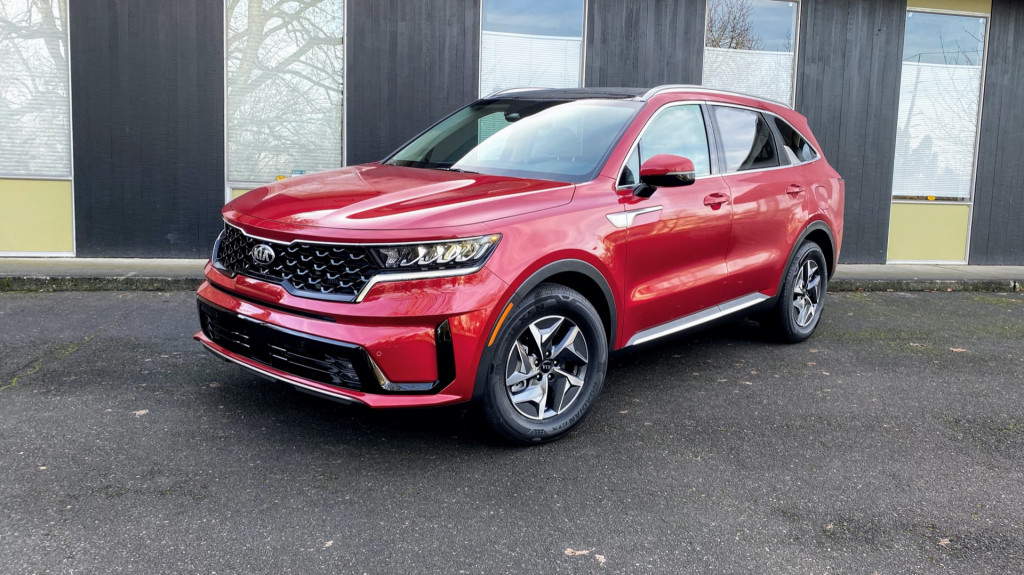 The Sorento Hybrid EX I drove wore a $38,205 price tag. The base Sorento Hybrid S includes dual-zone automatic climate control, a smart key system, heated front seats, and a power driver’s seat, while the nearly $3,000 step up to the EX I tested adds a panoramic sunroof, power tailgate, wireless smartphone charging pad, all-speed adaptive cruise control, and upgraded automatic emergency braking. Unlike some of Kia’s other models in this price range, it doesn’t include a heated steering wheel, heated second-row seats, or memory settings for the driver’s seat. 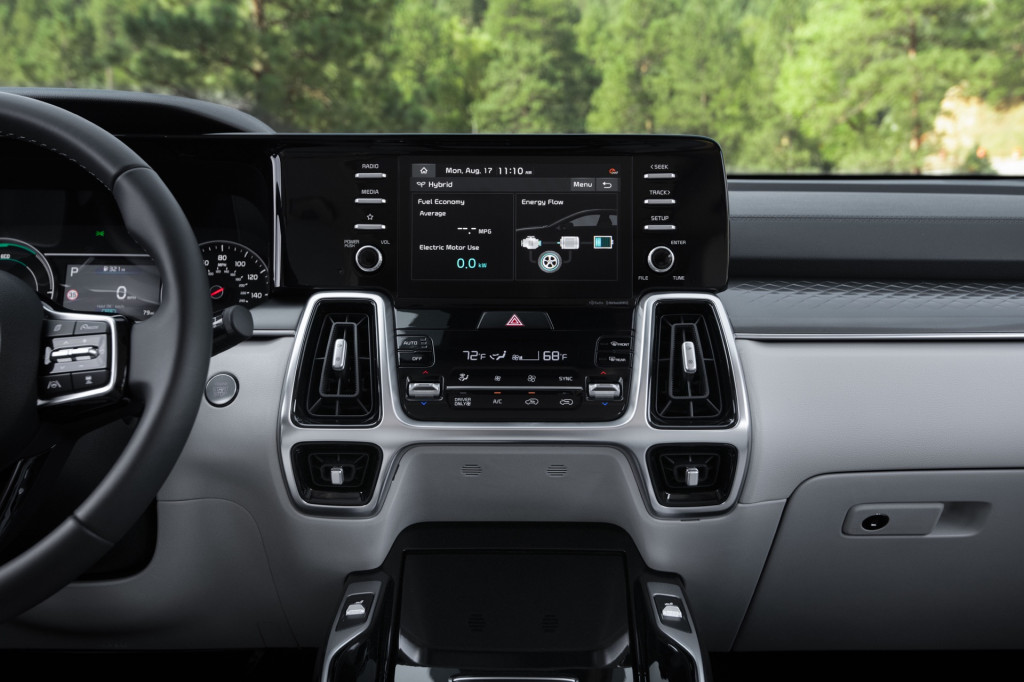 Big props are due for the infotainment system in this vehicle, which feels a full generation ahead of what you get in the Toyota Highlander Hybrid. The Sorento Hybrid paired easily with my iPhone, and once going through requisite screen approvals it worked flawlessly with Apple CarPlay. It’s one of the few wireless CarPlay systems I’ve tested in recent months that hasn’t muddled the interfaces between the Bluetooth and ACP when making an outbound call. Additionally, you get rotary buttons for tuning and volume; the big and clear fonts are easy to read day and night; and it’s all high in the line of sight.

If you come in with a very narrow definition of what you want and need—a hybrid, three rows of seating, and an SUV style, on a $40,000 budget—the Sorento Hybrid fits the bill well. What’s lacking here is that above-and-beyond feel that some other Kia products—like the Telluride—have. The Sorento Hybrid doesn’t feel like it’s gunning for Mercedes and Audi the way its predecessor did. 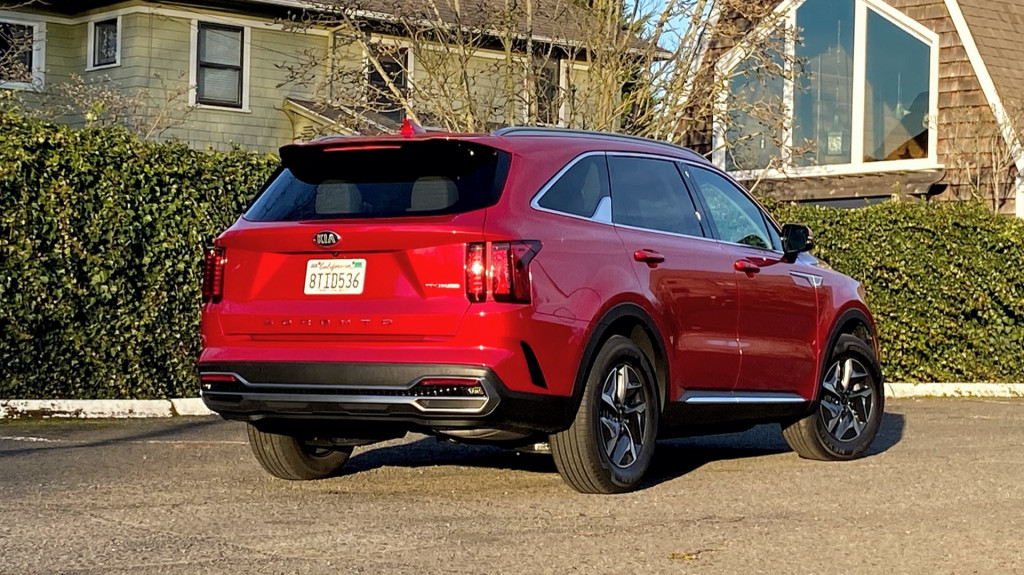 Perhaps the upcoming Sorento Plug-In Hybrid that’s on the way later in the year, with all-wheel drive and a 30-mile plug-in range, will look and feel a little more like the range-topping family flagship we were expecting.

In the meantime, as the Telluride reminded us, there’s a lot to like in the Sorento Hybrid, just not necessarily a lot to love.