The subject of carbon dioxide emissions is hardly a simple one, especially when it comes to electric cars.

They may not have tailpipes, but the electricity generated in order to keep them going has to come from somewhere.

Electric utilities, it turns out, are doing their bit to reduce carbon emissions—and that makes it even more important that vehicles of all sorts move from gasoline to electricity to do the same.

DON'T MISS: All renewable energy types to be cost-competitive by 2020: report

Most electric grids in the U.S. are lowering their carbon emissions per kilowatt-hour generated, as they move from coal toward natural gas because it's cheaper.

Renewables like solar and wind power are also becoming more cost-justifiable for grid operators, and their competitiveness against natural gas will only continue to improve.

That all adds up to a reduction in carbon emissions from the production of electricity over the last decade when compared to 1989 levels.

However, carbon emissions from all modes of transportation added together have been climbing since 2012.

That trend has to be reversed if the U.S. is to meet carbon-reduction goals,according to an article published early last week in The Guardian.

Those goals are intended to keep the global temperature from rising more than 2 degrees Celsius, which scientists say is the tipping point for some of the worst effects of climate change.

The solution is clearly electric cars, which on every one of today's U.S. grids emit less wells-to-wheels carbon dioxide per mile than the average gasoline vehicle sold new today.

The sales-weighted average fuel economy of new vehicles has stagnated at 25 mpg for the last four years.

On most U.S. grids, especially those where the bulk of plug-in electric cars are sold today, an electric car is lower-emission than any gasoline or hybrid vehicle sold. 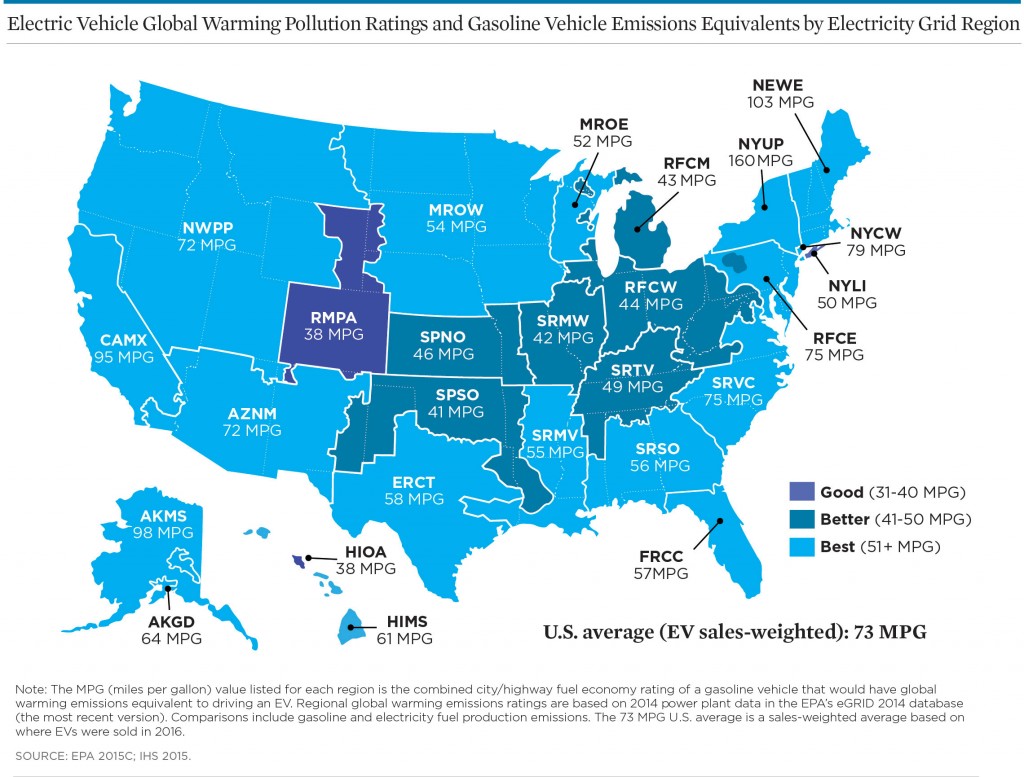 On average, according to the Department of Energy points out, an electric car contributes an average of 4,585 pounds of CO2-equivalent nationwide.

That's less than half the 11,435 pounds of CO2-equivalent contributed by gasoline-powered cars.

States that rely heavily on wind and natural gas for their energy tip those figures even more in electric cars' favor.

California, for instance, derives a mere 0.16 percent of its electricity from coal. Correspondingly, electric cars contribute a mere 2,276 pounds of CO2 equivalent.

In contrast, West Virginia runs almost entirely on coal and electric cars running on its grid come in at a far less-palatable 9,451 pounds of CO2 equivalent.

But even in places like West Virginia, the grid will gradually get cleaner—which is to say power plants will emit less carbon per kwh—meaning that electric cars charged on those grids will get cleaner along with them.

That's something that can't be said of gasoline cars, whose carbon emissions per mile remain constant through the vehicles' lifespans.