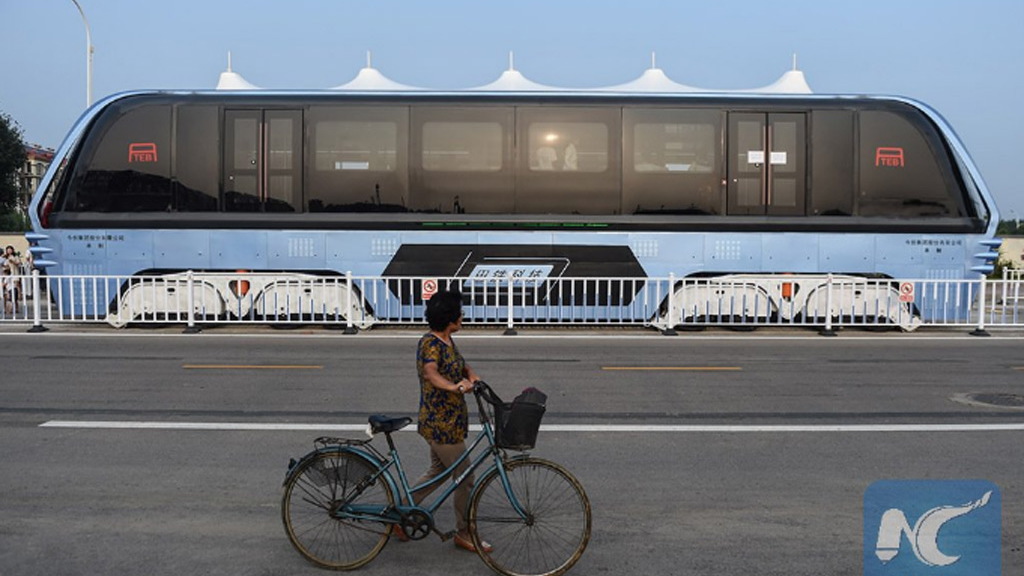 You may have seen the renderings floating around the web, showing designs for a huge Chinese bus riding on rails over a multi-lane road.

What a wild and wacky idea.

Except that it's real, and it has already been built. And it just carried its first passengers this week on a shakedown run.

DON'T MISS: How much do electric cars really pollute, even without tailpipes?

That news, along with photos of the real thing, comes courtesy of Xinhua News, which notes that its official name is the Transit Elevated Bus, or TEB-1.

The tests were conducted on Tuesday in the city of Qinhuangdao, Hebei Province, in northern China, to evaluate power consumption, braking capability, and aerodynamic drag.

Tebtech, the company that designed and built the elevated bus, says it has received expressions of interest from governments in Brazil, France, and Indonesia, with more inquiries expected.

As the report says, "The passenger compartment of this futuristic public bus rises far above other vehicles on the road, allowing cars to pass underneath."

And from the photos, that's true—it looks like passenger sedans can indeed pass underneath.

We do wonder, however, how the province will ensure that only sedans and hatchbacks use the road.

Given what look like relatively small clearances between the car roofs and the bottom of the elevated bus, commercial vans and heavily loaded pickup trucks with tall cargo—perhaps even taller SUVs—may not fit underneath.

Many Chinese roads bans such vehicles in crowded center cities, however, and we're assuming that's the case here.

We hope so, because the prospect of a huge bus knocking the roofs off delivery vans is not a pretty one.

Still, give the company points for effort and innovation—with some open questions remaining.