Oil prices are at their lowest levels in four years, and retail gasoline prices are likely to follow--more or less.

Thursday, while the U.S. celebrated its Thanksgiving holiday, oil prices fell 7 percent after OPEC announced it would leave production levels unchanged, according to CNN.

In the three days since then, the price has fallen further, to $66.15 a barrel at the time this piece was written.

While many analysts had expecting the Organization of the Petroleum Exporting Countries (OPEC) to reduce production levels at its Thursday meeting.

But Saudi Arabia insisted that production remain at current levels, according to CNN.

Other oil-producing OPEC nations, including Nigeria, Russia, and Venezuela, have a higher cost base in some circumstances than does the Saudi kingdom.

Land-based oil and gas fields in production for many years from prolific reservoirs, using existing equipment, remain relatively low-cost. New production from larger deepwater projects, however, as well as hydrofracturing, tar-sands, and some shale oil reputedly requires prices of $90 per barrel to make money.

Some analysts suggest that the decision was made to keep prices low enough to pressure the weakest of the U.S shale-oil producers, who also require prices above the current levels to justify their extraction and refining activities.

Over the last 18 months, the U.S. has produced more oil than Saudi Arabia--previously the world's largest source of crude oil--and the world is now, effectively, awash in oil.

Meanwhile, the impact on North American drivers and the automakers who sell them vehicles will prove to be positive in the short term, analysts say.

Money that a household doesn't have to spend on gasoline can be spent on other items, leading to economic growth--and higher profits on manufactured goods with lower transportation expenses.

Meanwhile, the gas mileage of new vehicles continues to rise, with corporate average fuel economy (CAFE) requirements rising every year from 2012 through 2025.

U.S. gasoline consumption peaked in 2006, and has fallen every year since then--and that trend shows no signs of declining.

The mix of vehicles, however, has historically changed during periods when gas prices are low. 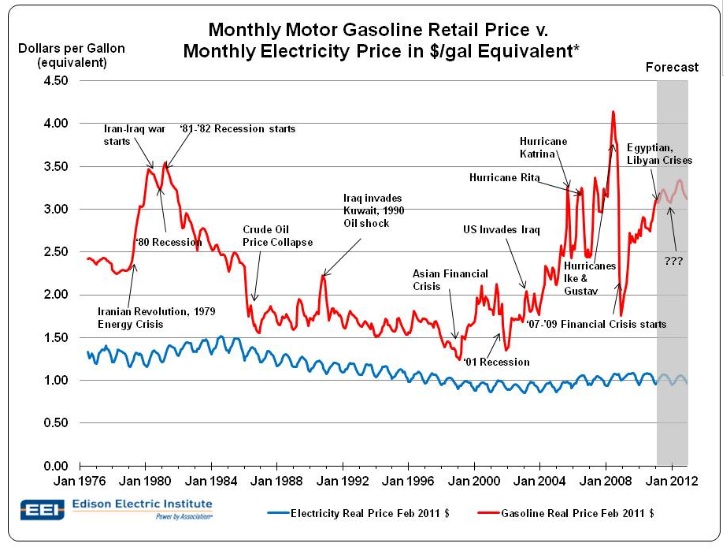 Electric cars? There's not a lot of data yet to show the relationship between gasoline prices and plug-in vehicle sales.

And some analysts suggest that as hybrids have become more mainstream in their 15 years on sale, they're now bought more for money-saving reasons and less to make a statement about values.

Electric cars have assumed the role of automotive statement in many places--particularly the important California market--and their owners are entirely insulated from any variation in gasoline prices.

Absent an unexpected event--a dirty bomb in the Strait of Homuz, say--most analysts don't expect significant upward motion over the next year or so.

[EDITOR'S NOTE: An earlier version of this article mischaracterized the circumstances and oil sources under which a price of $90 a barrel is required to make them economically justifiable. We have revised the paragraph in conjunction with a knowledgeable source in the oil and gas industry.]