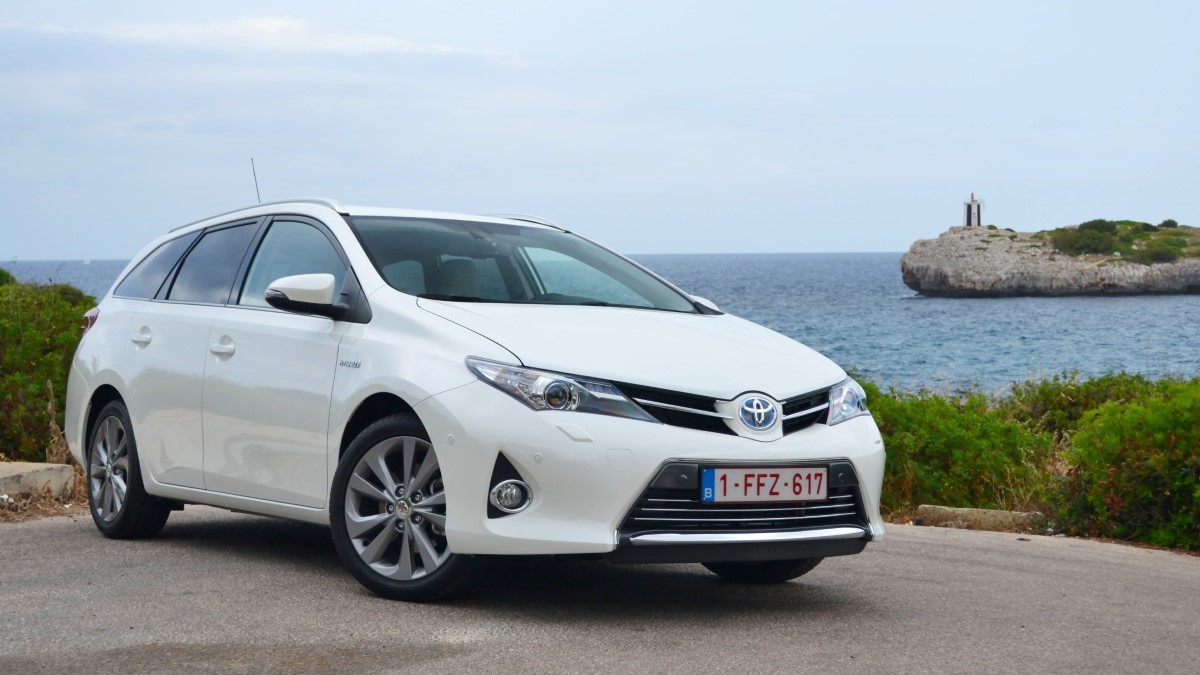 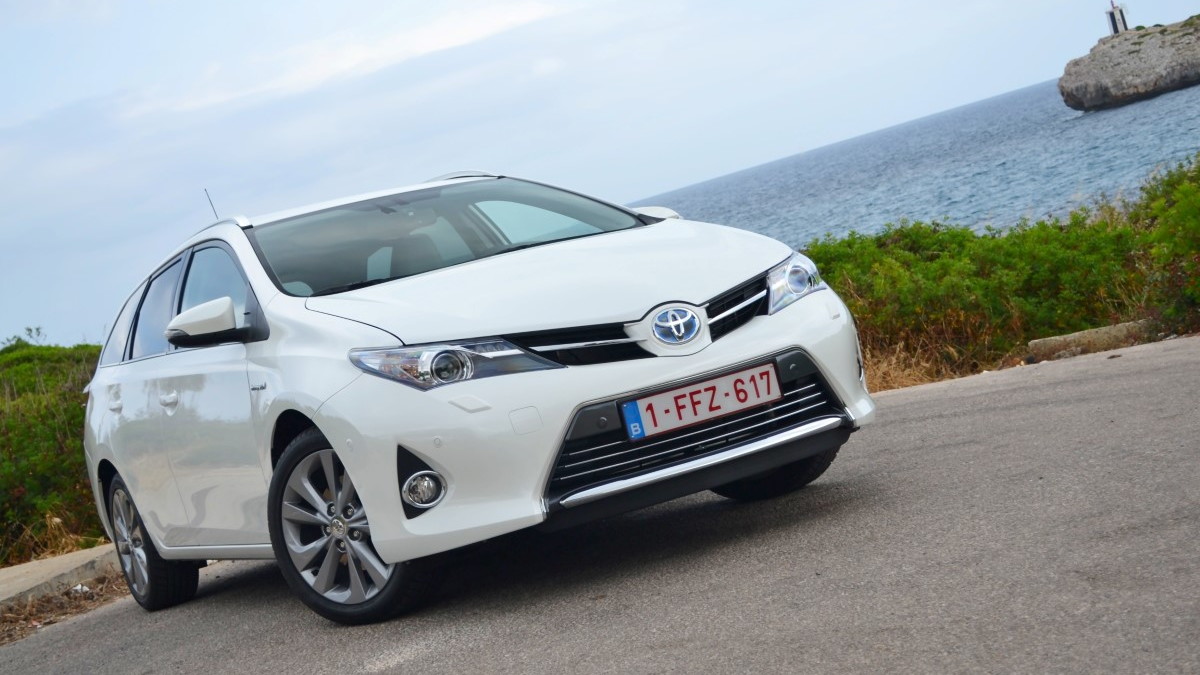 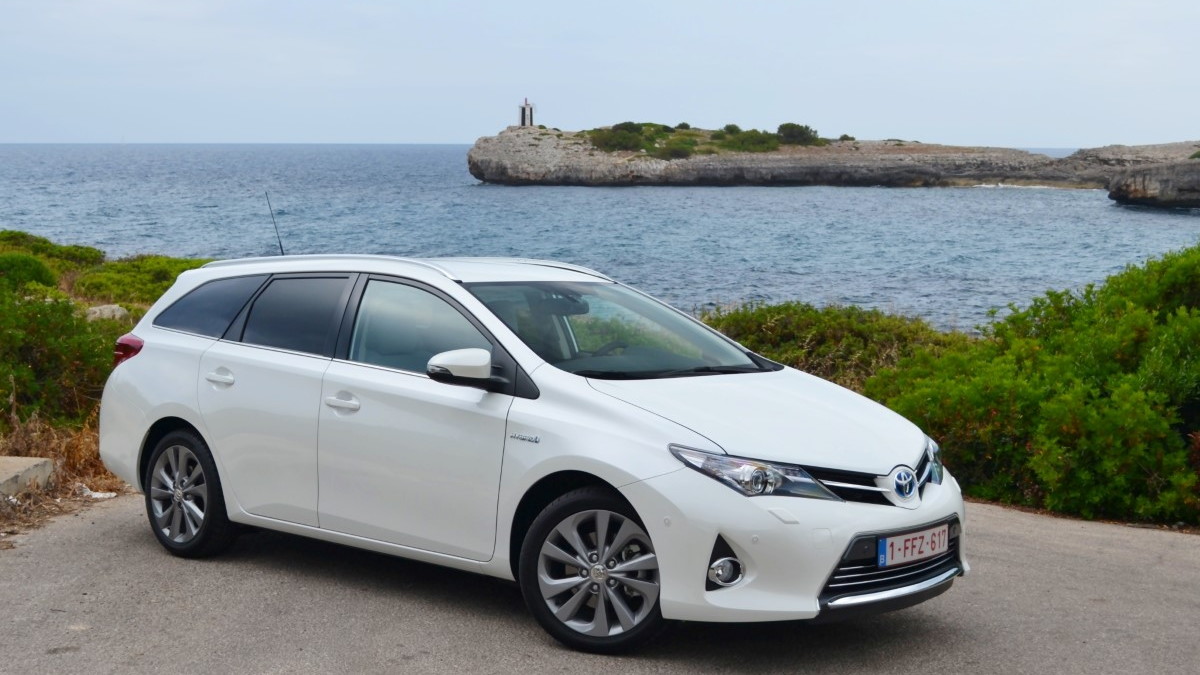 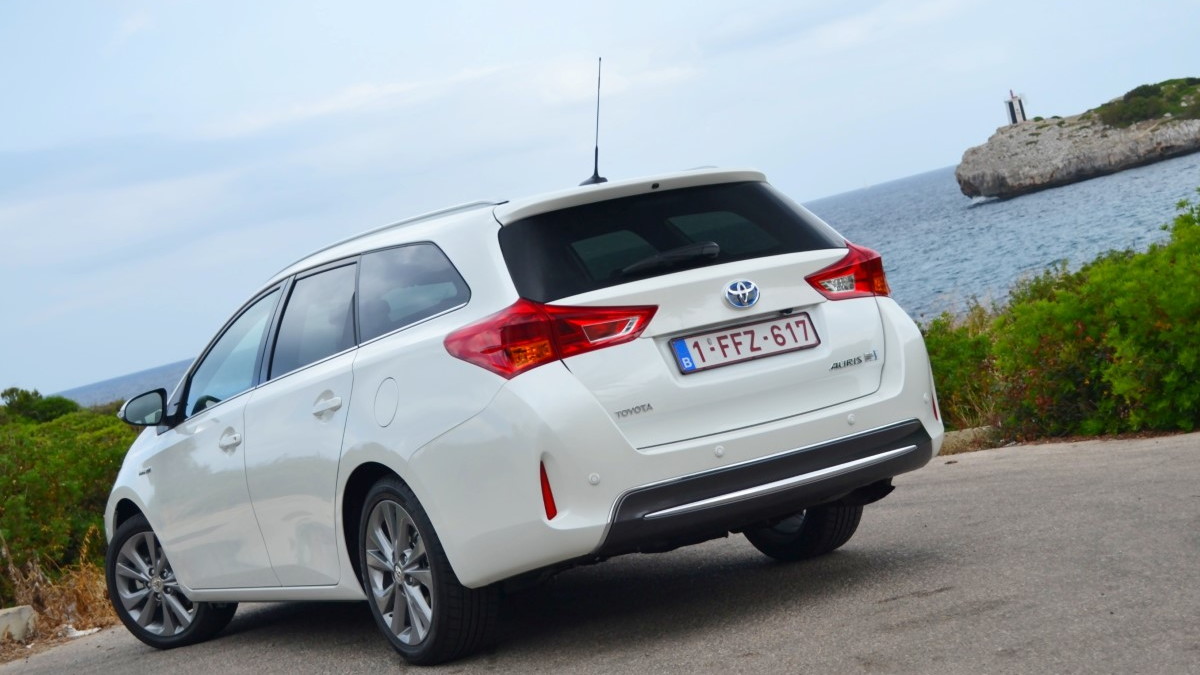 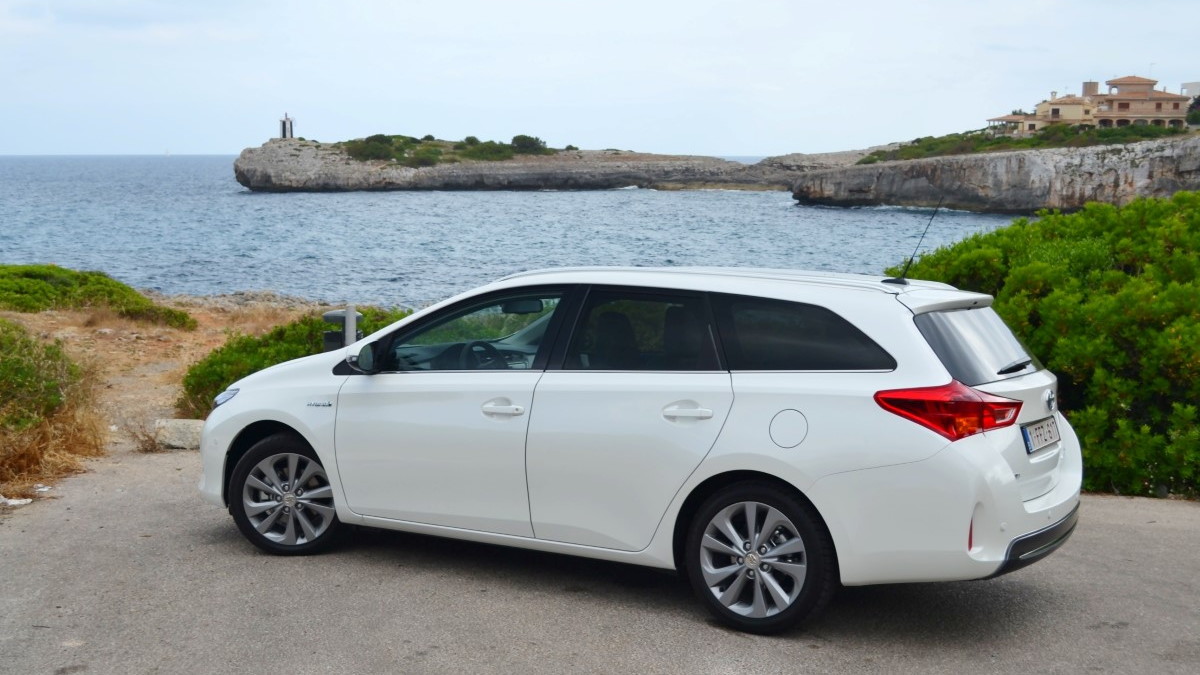 14
photos
It's easy enough to find a hybrid these days, with plenty of automakers offering cars that blend gasoline engines and electric propulsion to one degree or another.

More difficult is finding a hybrid vehicle suitable for more active families, those with greater need for space and practicality. Where are the hybrid wagons?

Europe, it seems, where we drove Toyota's new Auris Touring Sports in hybrid format, on the sunny Balearic island of Mallorca.

Toyota says the Auris Touring Sports Hybrid (TS, from now on) is the "first full hybrid compact wagon" on the market. That market, in Europe at least, is typically full of diesel wagons.

The elephant in the room is the Prius+, which you'll be more familiar with as the Toyota Prius V.

In Europe, the Prius+ is a seven-seat vehicle, so there's no real overlap between it and the TS. You can see where this is heading: If Toyota decided to launch the Auris in the U.S. (unlikely, since the hatchback would tread on the Corolla's toes), the Prius V wagon would be the main excuse not to bring over an Auris hybrid wagon.

Similar under the skin

In terms of powertrain, the V and the TS Hybrid are very much cars with the same Prius parent.

Both use a 1.8-liter Atkinson cycle four-cylinder gasoline engine, paired with an electric motor through a planetary gearset. While Toyota claims the setup has been tweaked to give a more natural feel between road speed and engine revs, it's a system we're still very familiar with--the car can run using the electric motor alone, the electric drivetrain can assist, it can back out of the equation, and it can recharge using regenerative braking.

Anyone put off by the Prius V's drivetrain won't find much to tempt them here, and the Hybrid's 11.2-second 0-62 mph time and 109 mph top speed won't satiate the speed freaks.

However, the Auris is one of the quietest cars we've driven with this drivetrain, and while it still drones away under hard acceleration, it seems a little more muted than in other applications. 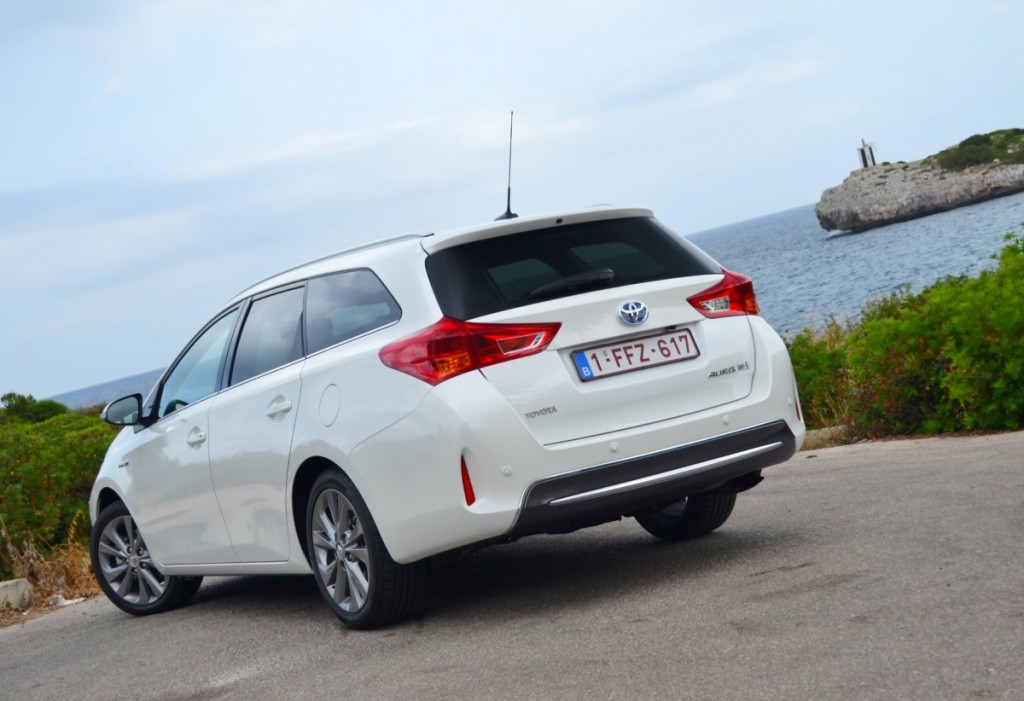 It's also frugal. Over a test route comprising freeway, twisty roads and some admittedly traffic-light town driving, our car returned an indicated 50 mpg.

Possible inaccuracies with the trip computer aside, it doesn't seem like a difficult figure to attain. While we drove relatively economically, our co-driver made little such deliberate effort before going 1 mpg better over his own route, albeit slowed by a little more traffic.

That's better than the 40 mpg average drivers are attaining in the Prius V, according to figures submitted on the EPA's fueleconomy.gov site. Our disclaimer is that the TS Hybrid achieved that 50 mpg figure with only two passengers and little luggage. Load it up with a family and their paraphernalia, work the engine harder (and you do need to work it hard to make swift progress sometimes) and watch those numbers tumble. 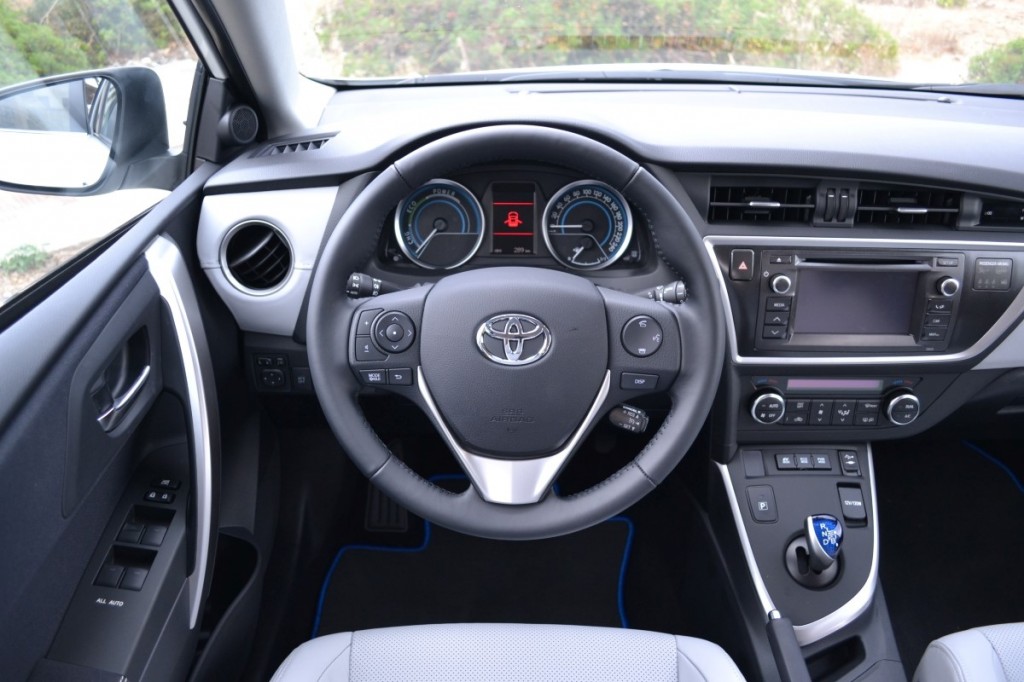 While the TS Hybrid is undoubtedly a practical car, it can't quite match the Prius V for luggage space.

Its 18.7 cu-ft load space lags the Prius V's 34 cu-ft, which isn't too surprising--the V is a larger, taller vehicle, and one with the luggage space you'd expect of a car offered with seven seats in some markets.

The Auris's seats do tumble forwards (easily, with a simple handle in the trunk) to extend that to 58.5 cu-ft when required, and for front and rear-seat passengers there's still plenty of space, if not the wide, airy feeling of the V.

We found the leather seats of our test car particularly supportive and comfortable, though we're not sure such a light shade would withstand the dirt of family use for long. The cabin itself might, with a chunky, well-built feel.

There isn't much eye-candy, with only a light-colored dashboard inlay and splashes of hybrid blue here and there to distract from a fairly generic dashboard. On the other hand, its dissimilarity to a Prius might go down well with some customers.

Not fun, but not bad

The same could be said of the way the Auris TS Hybrid drives. It won't raise the pulse with excitement, but nor will it raise it through stress.

It's a relaxing car to drive, feels planted at speed and the low noise contributes to a car you can ease along a road with little effort. When the roads get twisty it serves up plenty of grip and the steering, while feel-free, is accurate and nicely-weighted.

It does feel every pound of its 3,240-lb curb weight as you hustle it through turns, but then the Prius V is even less suited to spirited driving, and on balance the Auris is the better car to drive. Ride quality isn't compromised either--our drive started with a pitted, poorly-surfaced track, over which the car felt firm but not uncomfortable. 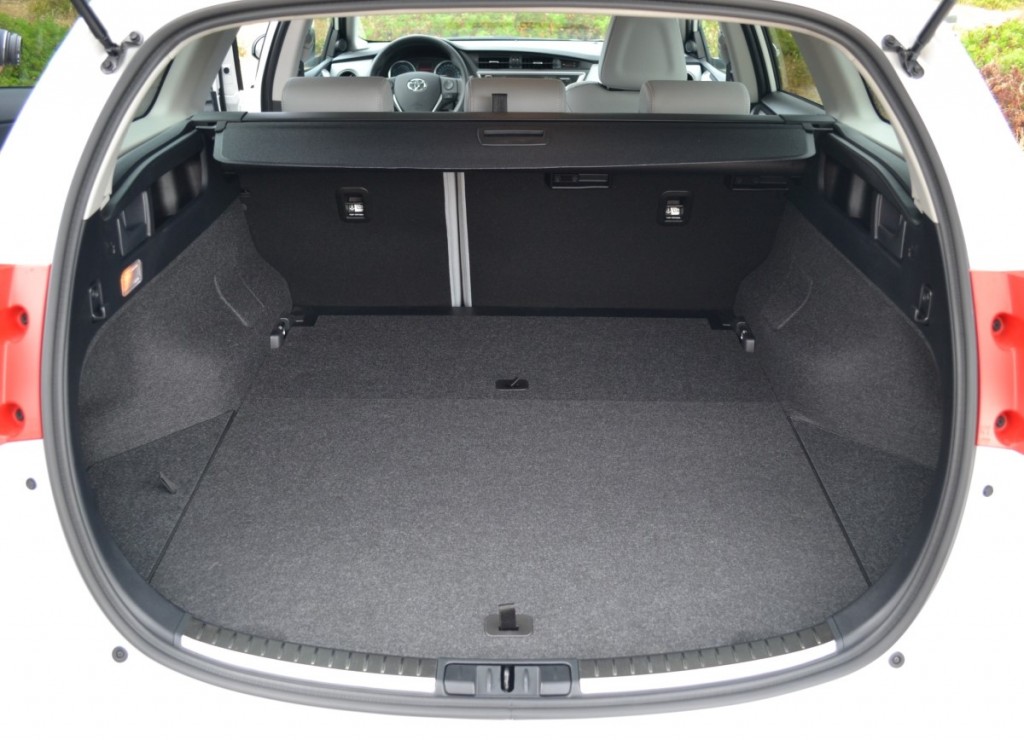 Is the U.S. missing out by not getting the Auris Touring Sports Hybrid?

To a degree, yes. It's easier on the eye than the Prius V, drives better, and at the end of the day it would offer consumers more choice. And in Europe, the TS is cheaper than the Prius+ by a significant margin--the cheapest + costs $40,600 in the UK (yeah, we know...) while the Auris TS Hybrid starts at around $32,300.

But the Prius V remains the more practical vehicle, more suitable for those family users mentioned earlier. And it's hard to judge how the TS might be priced in the U.S.

Ultimately you don't get a say in the matter, as too many factors preclude the TS arriving in the States. But next time someone asks "where are the hybrid wagons?", at least you can give them an answer: Europe.