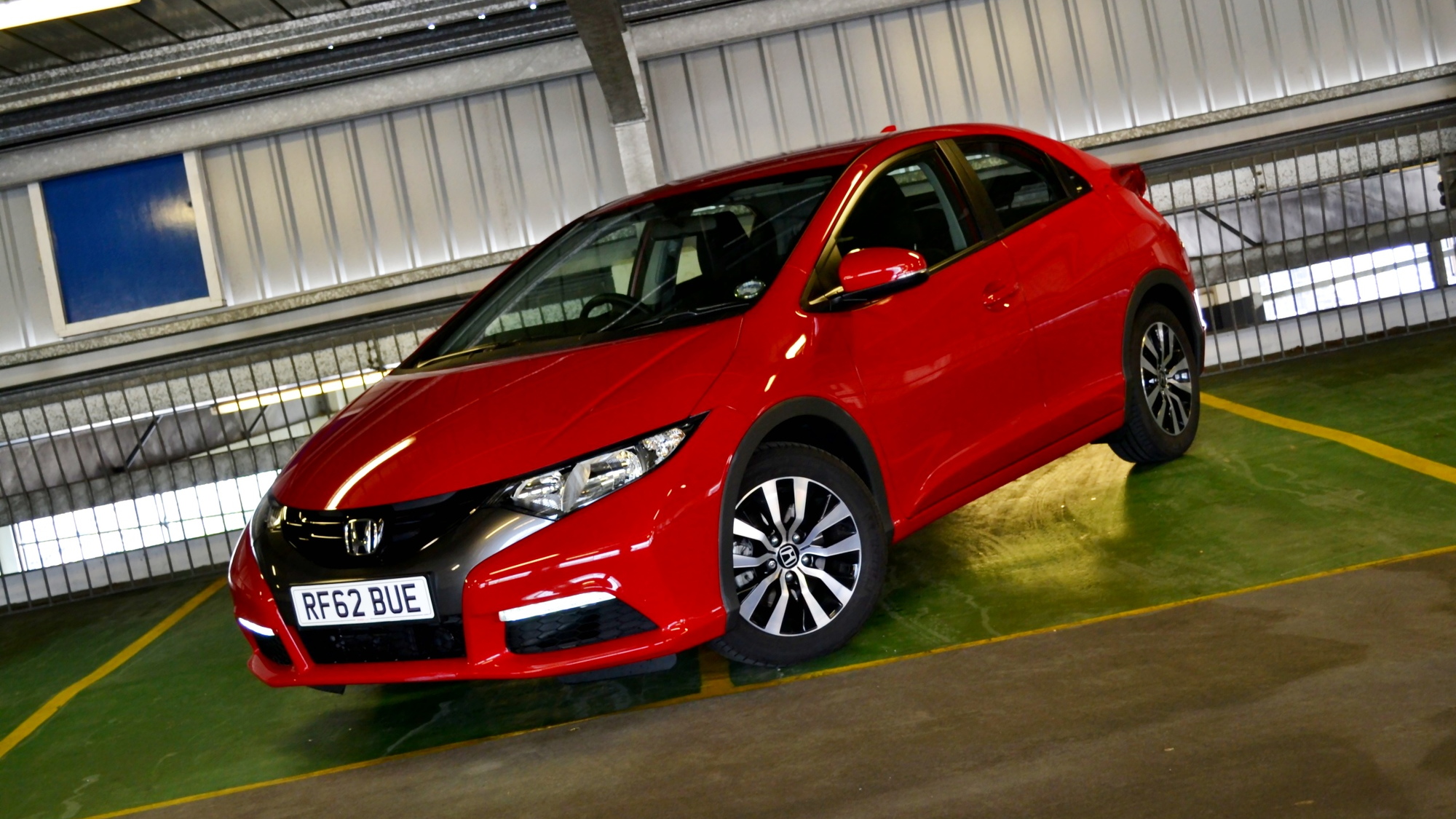 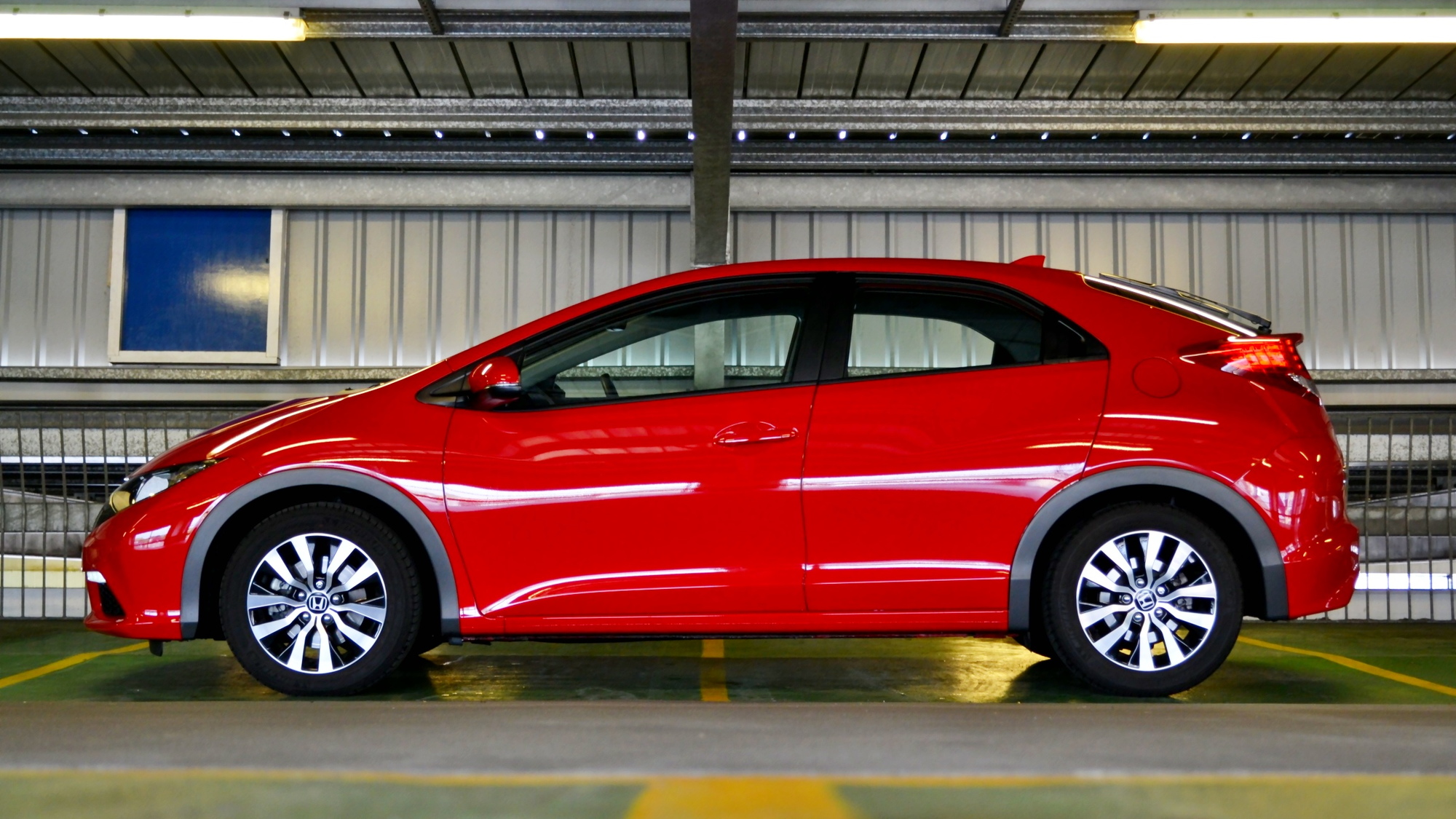 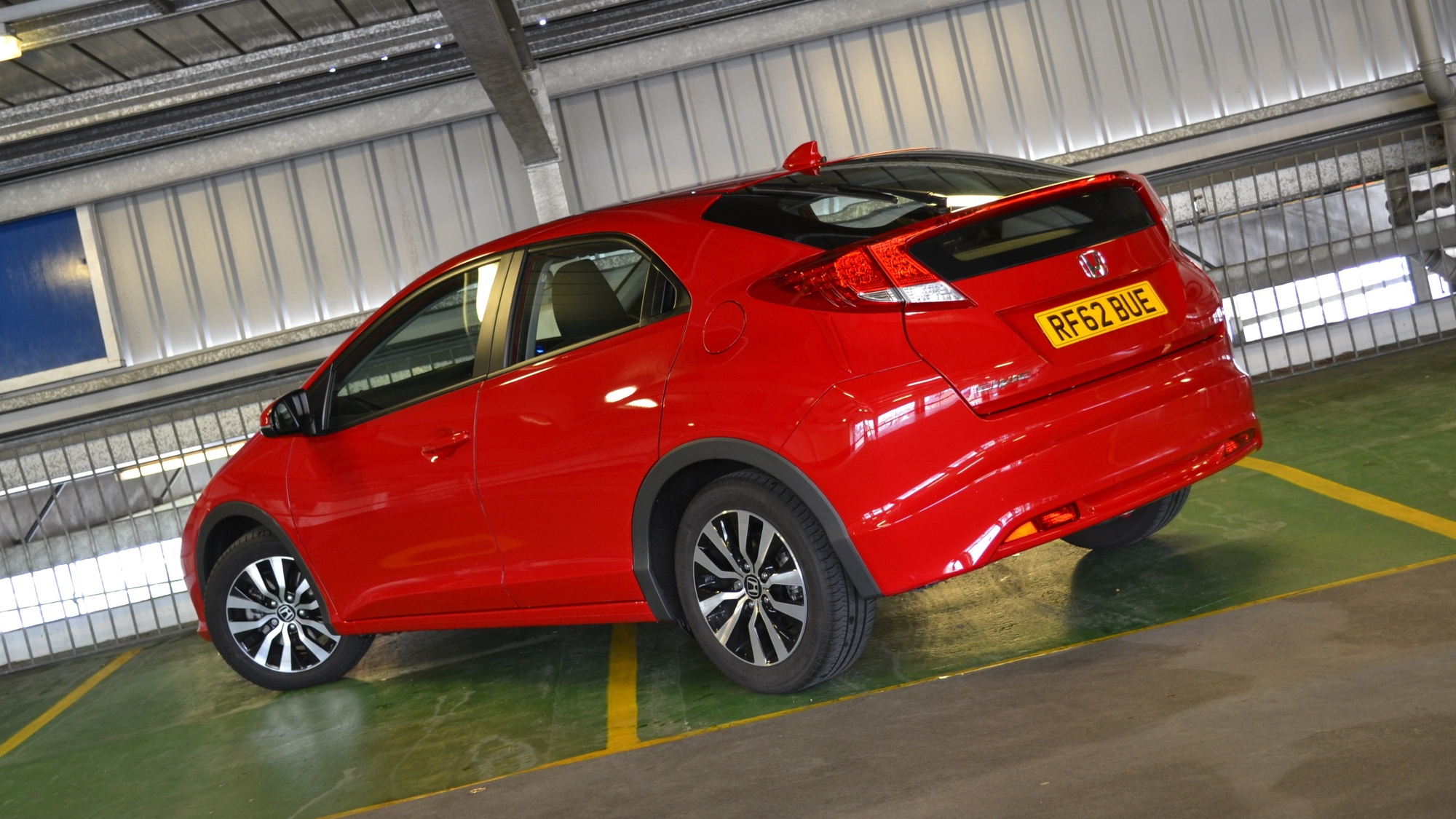 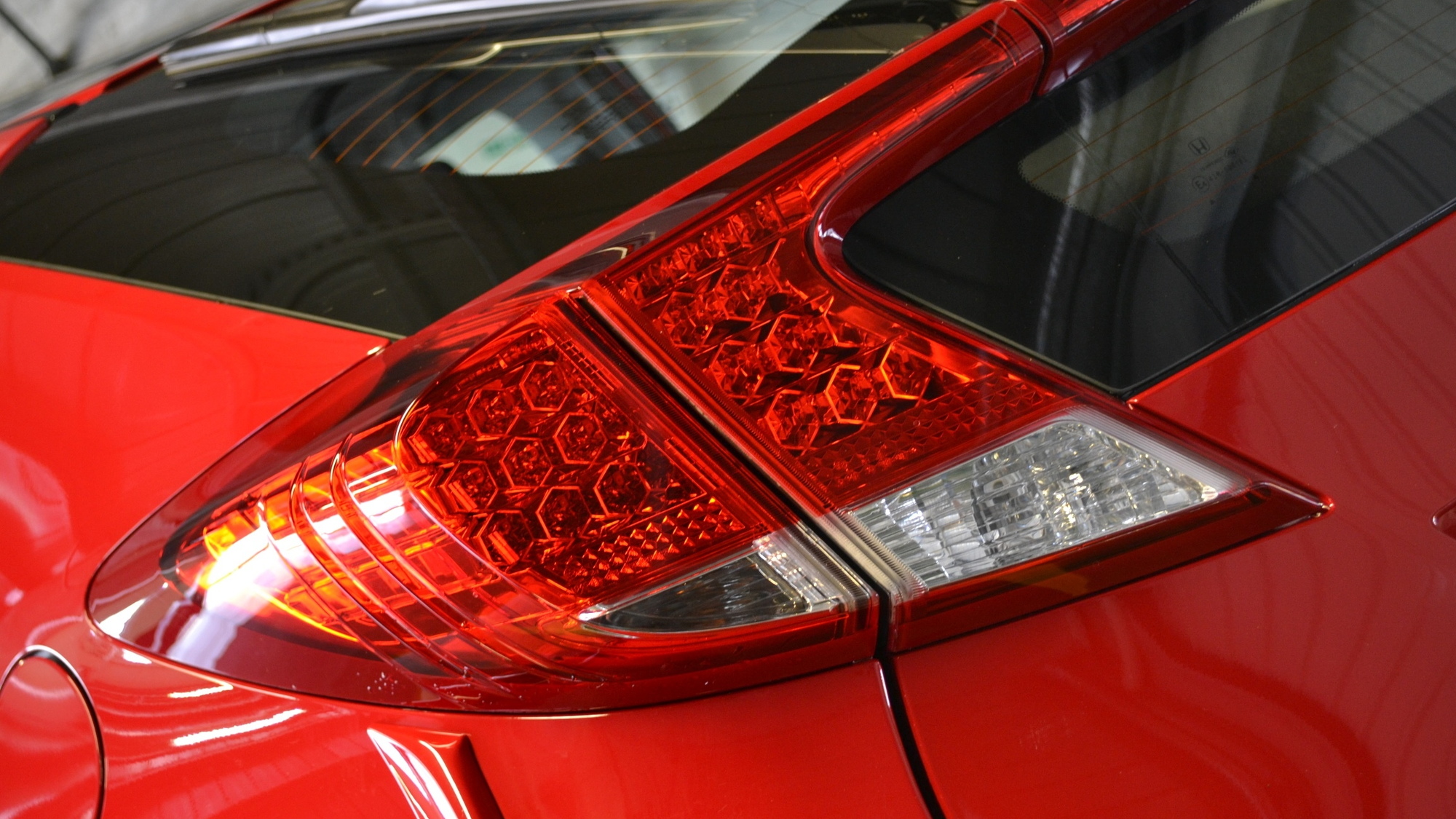 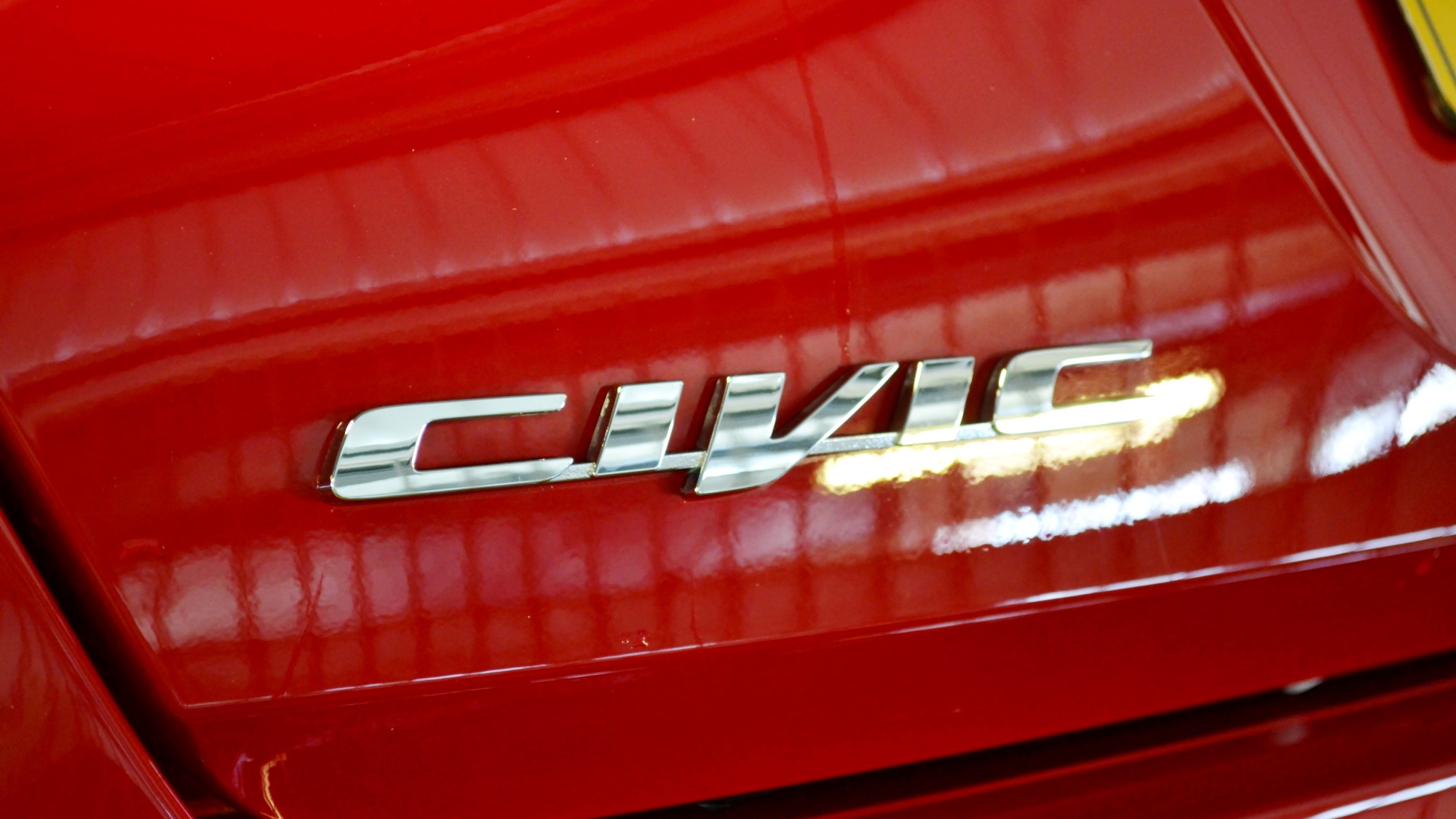 8
photos
The most frugal Civic U.S. drivers can currently buy is the 2013 Civic Hybrid.

The low-key sedan manages 44 mpg in city, highway and combined driving, sips gasoline, and goes about its business with relative anonymity.

In Europe, things are a little different. There, the Civic is a five-door hatchback rather than four-door sedan, and the styling is a little more space-age. Oh, and the diese variant has the potential to hit 60 mpg.

That's no pie-in-the-sky claimed figure either--though Honda does quote an official 65.3 mpg for the 1.6-liter, four-cylinder diesel Civic in question.

Instead, it's the figure we took from the car's trip computer after over 900 miles of mostly highway driving, most of which was done at the UK's speed limit of 70 mph, with 90 minutes of driving in London traffic thrown into the bargain.

The trip computer figure of 74.5 mpg in imperial gallons translates to 62 mpg U.S.

Using fuel tank range as a slightly more accurate measure, we drove 710 miles before chickening out and filling up, with only 15 miles left on the range computer.

A total range of 725 miles (it would likely do more before actually running out, but we weren't about to see how much) divided by the car's 13.2 (U.S.) gallon tank works out at 55 mpg.

That figure is obviously subject to change, depending on driving conditions--flatter roads and lower speeds would quickly see economy climbing beyond 60 mpg; more city running and 80 mph highway speeds would likely drop it to nearer 45-50 mpg.

Like its American counterpart, the Civic competes in the compact class against rivals such as the Ford Focus and Volkswagen Golf.

Its interior and trunk are larger than either though, Honda maximizing interior space with close to one-box profile. The stubby nose hides a 1.6-liter four-cylinder, 120-horsepower turbocharged diesel engine, with 221 pounds-feet of torque.

Performance is respectable--0-62 mph takes 10.5 seconds, aided by a slick six-speed manual transmission. Thanks to the healthy torque there's always urge on offer at highway speeds too, though not as much as you might find from one of VW's 2.0-liter TDIs, for example.

Honda does also offer a 2.2-liter diesel model with more performance and slightly less economy, so diesel buyers aren't stuck with a lower-powered model. There's little to fault with the way it drives--the handling is neat and precise, refinement is good (both wind and engine noise are low) and the ride quality capable of dealing with pot-holed UK roads.

The exterior's quirky styling continues inside, which shares some similarities with the U.S. models--the split-layer instrument panel and the steering wheel design, for example.

It's comfortable too, and while this base model lacked navigation, auto lights and wipers, cruise control and a few other toys, it still featured air conditioning and USB connection for smartphones.

Not for the States, with good reason

Our readers are often frustrated that models such as this don't reach U.S. shores, but there are a few good reasons why this isn't the case.

The first, for this model at least, is that the Euro 5 emissions-rated engine doesn't have urea injection, and would therefore be unlikely to meet tough U.S. emissions regulations for diesel vehicles.

The second is that with a body style designed exclusively for Europe, this particular car probably wouldn't meet U.S. crash safety regulations either. And as a five-door hatchback, it's a less popular body style than the sedan sold in North America.

But it shows the potential of diesel vehicles, particularly when they sacrifice some of the performance of the larger engines typically offered in the U.S.

For some perspective, 55-60 mpg is also better than we've achieved from any other European-market diesel we've tested before, on fairly similar routes and with fairly similar engine capacities.

From Honda, a company that has only really dabbled with diesel in the last decade, that's quite an achievement.