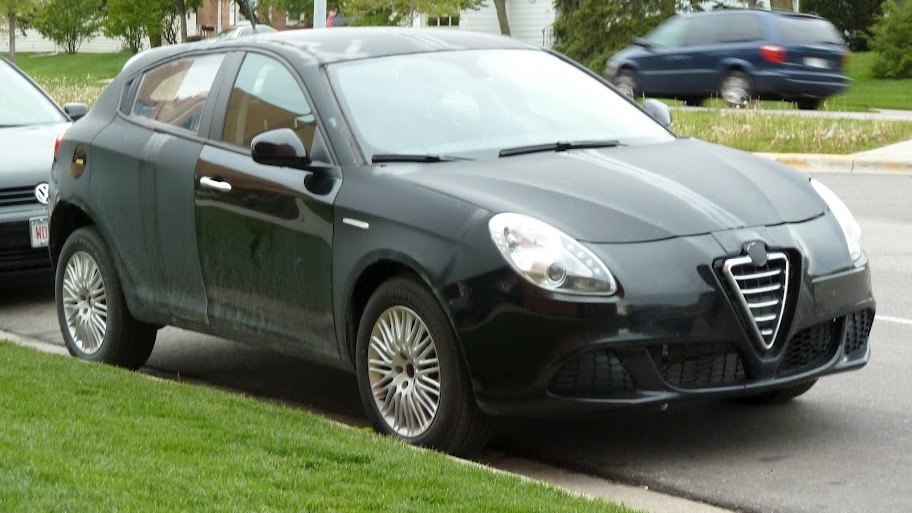 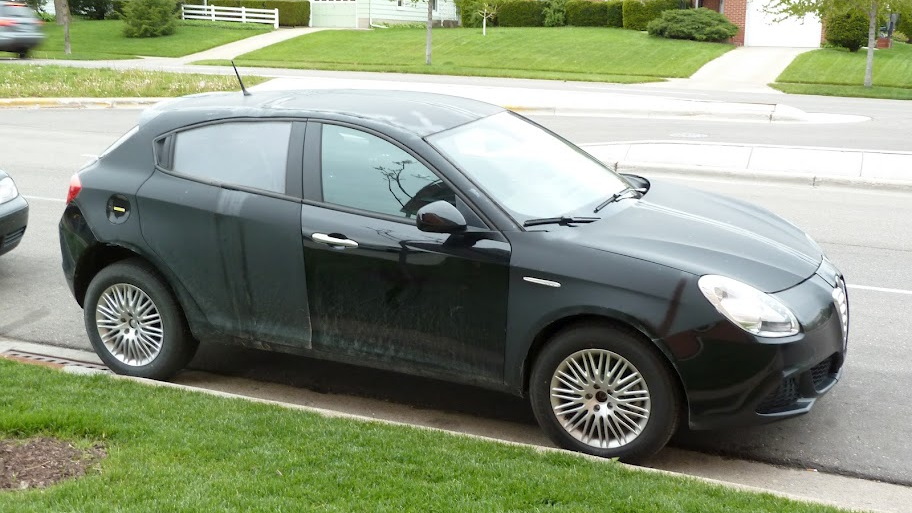 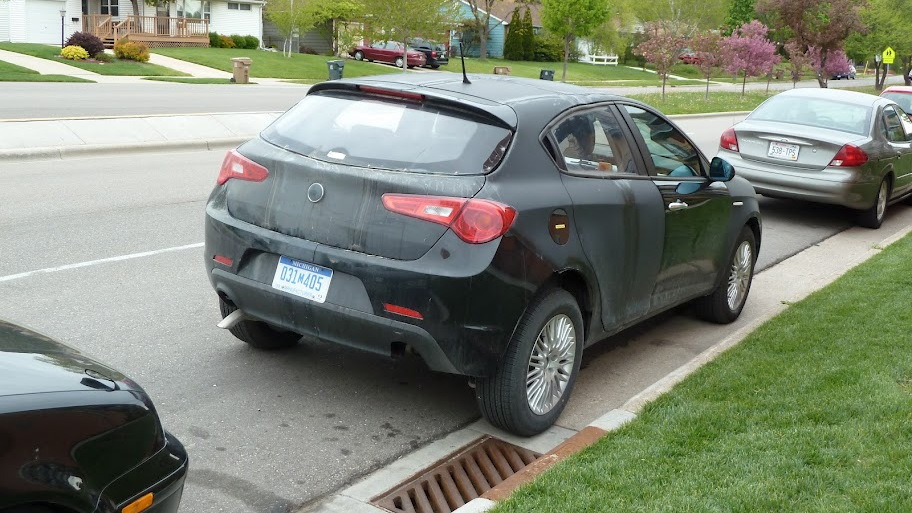 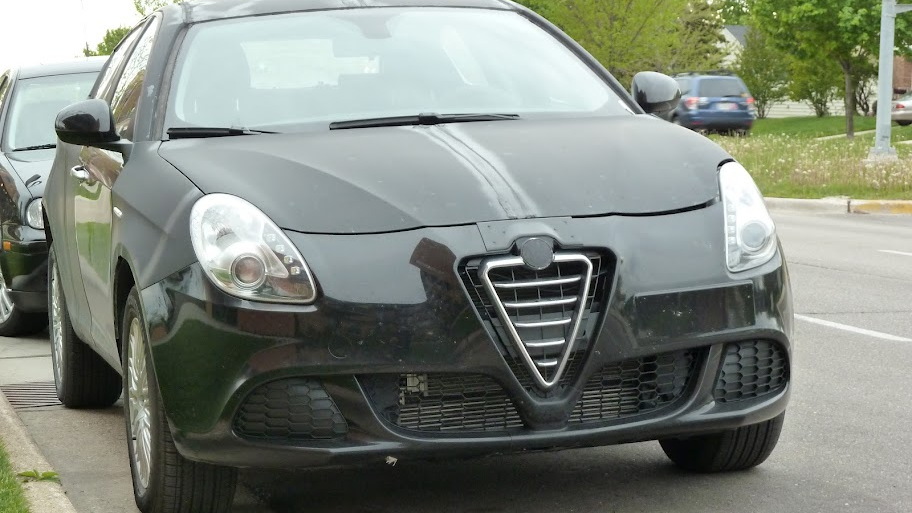 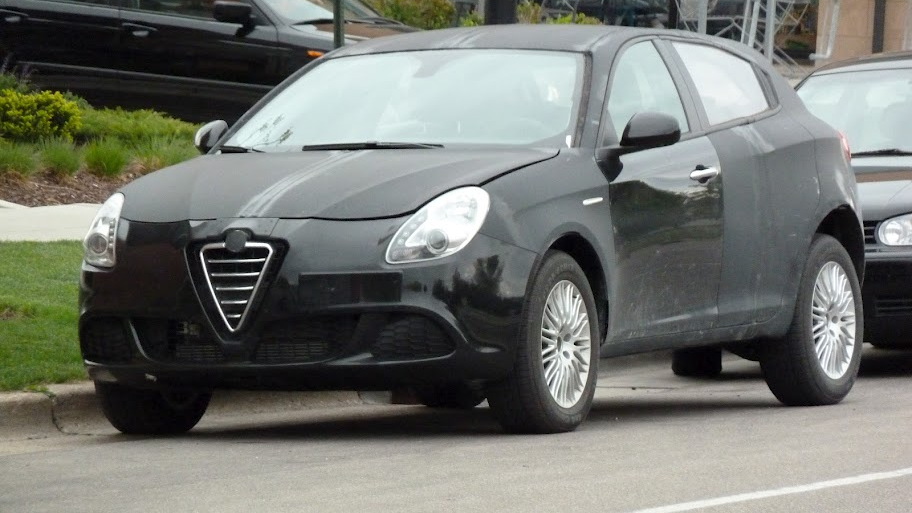 Always carry a camera; you never know what you'll see parked on the street.

That's how our contributor, Thomas Bey, shot these exclusive spy shots of an engineering prototype for what may be a future hybrid Jeep or Dodge model to be based on the same running gear as the 2013 Dodge Dart compact sedan.

We think this car serves the same purpose in developing a powertrain for a future Jeep or Dodge model here.

It will be one of quite a few future Dodge, Jeep, Chrysler, Alfa Romeo, and Fiat models that the combined Chrysler-Fiat company will build on the Dart's underlying platform.

[UPDATE: We have now been told by two industry insiders that this is a mule for testing the next-generation Jeep Liberty powertrain only--not a hybrid.]

We think this particular vehicle is testing components for a future Jeep compact crossover to be launched next year. And we think its powertrain could be a hybrid; it might even be a plug-in hybrid. Here's why.

First, the big red shutoff button on the dashboard is the major giveaway. Engineering mules with gasoline engines don't often have those. Bey tells us the label below the button says something like "Power Only Stop."

On the other hand, a colleague points out that the big kill switch is commonly used on mules testing various new electronics, including traction control and electronic stability systems--so it may not imply anything about the powertrain.

Second, look closely at the ride height. You'll see that the Alfa Romeo body rides higher than a standard Giulietta, especially at the rear, which could indicate an all-wheel drive system underneath.

The Dodge Dart is front-wheel drive only, but we know a Jeep all-wheel drive crossover is coming.

Third, the single tailpipe emerging from the left-hand of two cutouts in the lower rear panel is not a finished item--probably indicating a powertrain under development. Bey notes that the yellow label over the fuel filler door says "premium fuel only," but he didn't open the gas door to see if there was a plug-in electric port behind it. Drat.

Finally, think back to 2008. You may recall the Jeep Renegade concept shown at the Detroit Auto Show that year. The small Jeep plug-in hybrid concept used a lithium-ion battery pack to deliver about 40 miles of electric range, after which a 1.5-liter three-cylinder diesel engine switched on to provide up to 400 miles of total range.

Let's be clear: The Jeep Renegade concept was created well before Fiat took over Chrysler following its 2009 bankruptcy and U.S. government-backed restructuring. It had nothing to do with Fiat or Alfa Romeo running gear.

But Jeep needs a compact (or C-segment) vehicle to replace its Compass hatchback and Patriot crossover (based on the running gear of the discontinued Dodge Caliber). Now that the 2013 Dodge Dart has been launched and will reach dealers in June, those vehicles are next on the list.

Chrysler-Fiat will launch a Jeep compact crossover early next year that will compete head-to-head with the Toyota RAV4 and Honda CR-V, replacing both the Compass and Patriot. Alfa-Romeo will get its own derivative, to be sold in Europe.

Given future regulatory requirements for zero-emission vehicles in various markets around the world, the product planners at Chrysler-Fiat at least need to experiment with a hybrid and associated plug-in version of its highest-volume global platform.

Thus far, the company has said nothing about plug-in vehicles, aside from a planned low-volume electric version of its Fiat 500 minicar. That vehicle will be introduced late this year for 2013 sales in a handful of states.

Chrysler is also known to be planning a hybrid version of its Chrysler 300 full-size sedan, as well as a hybrid option for its signature minivan.

Of course, we could be entirely wrong about what vehicle these photos show.

If you think we got it wrong, leave us your ideas on what this vehicle actually is in the Comments below.