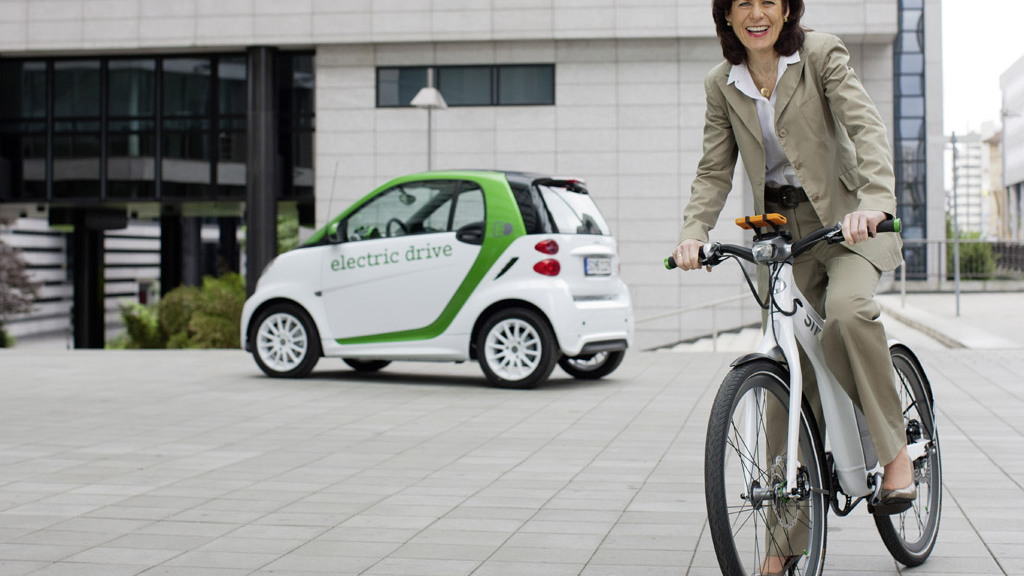 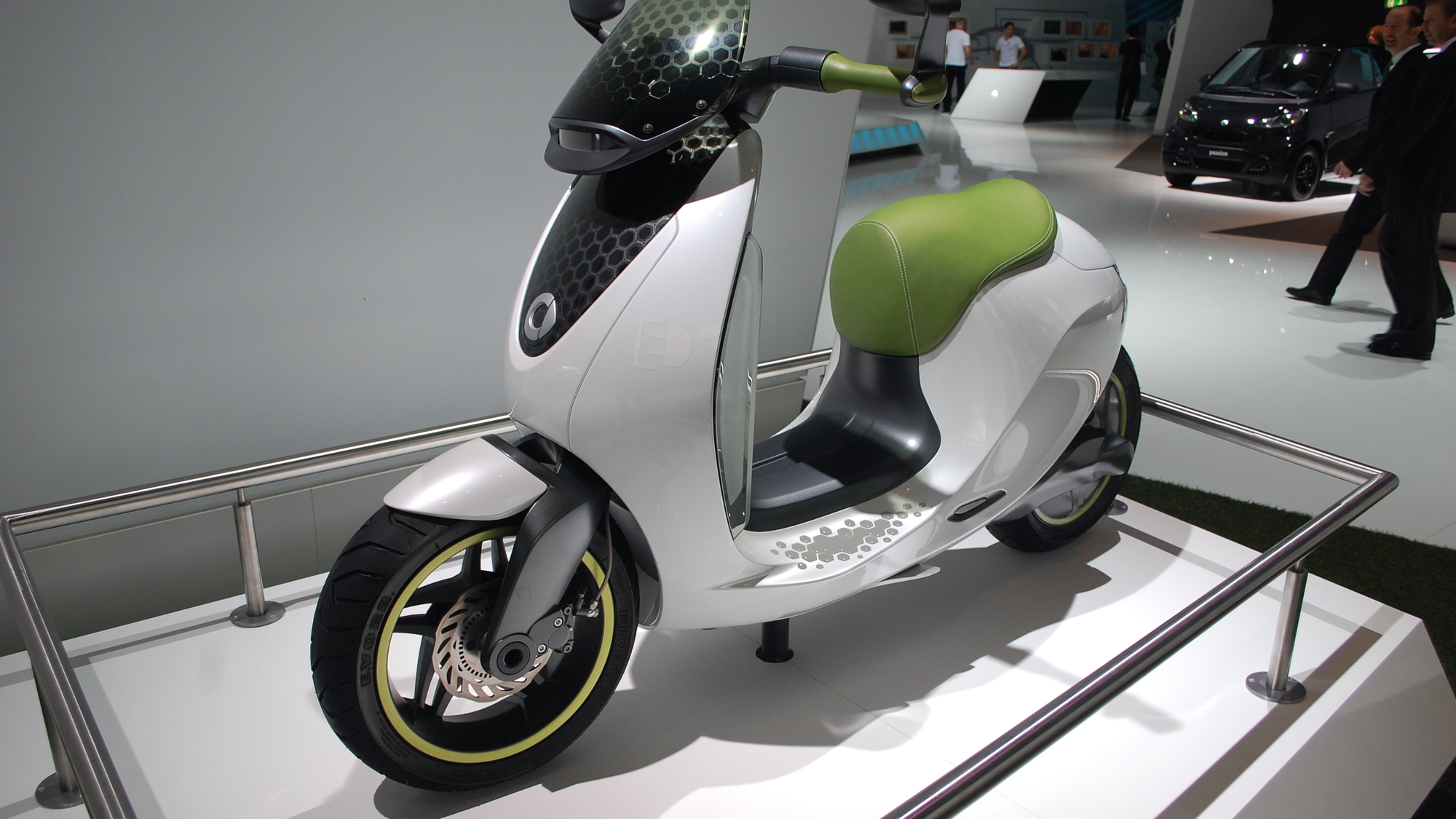 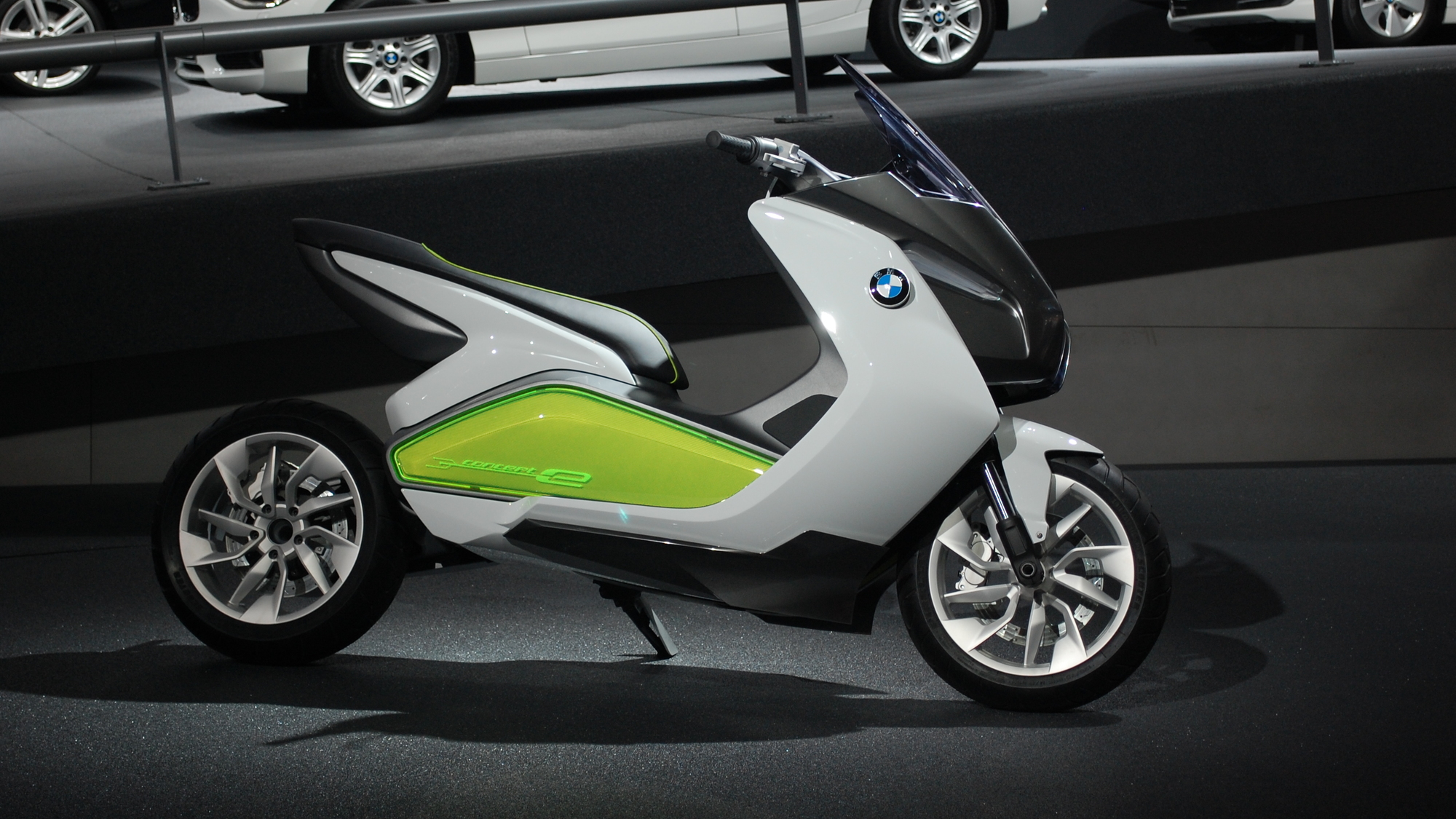 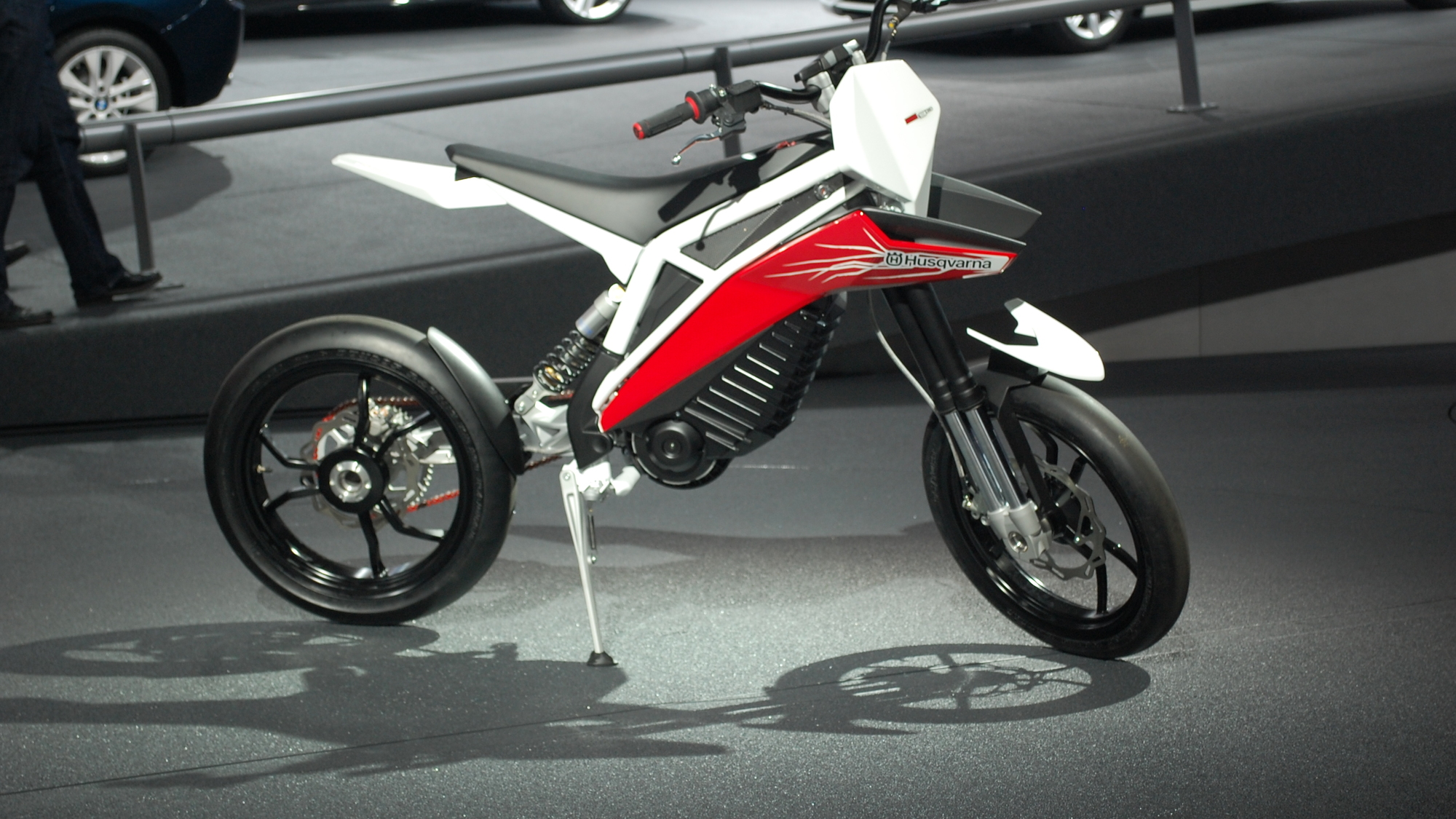 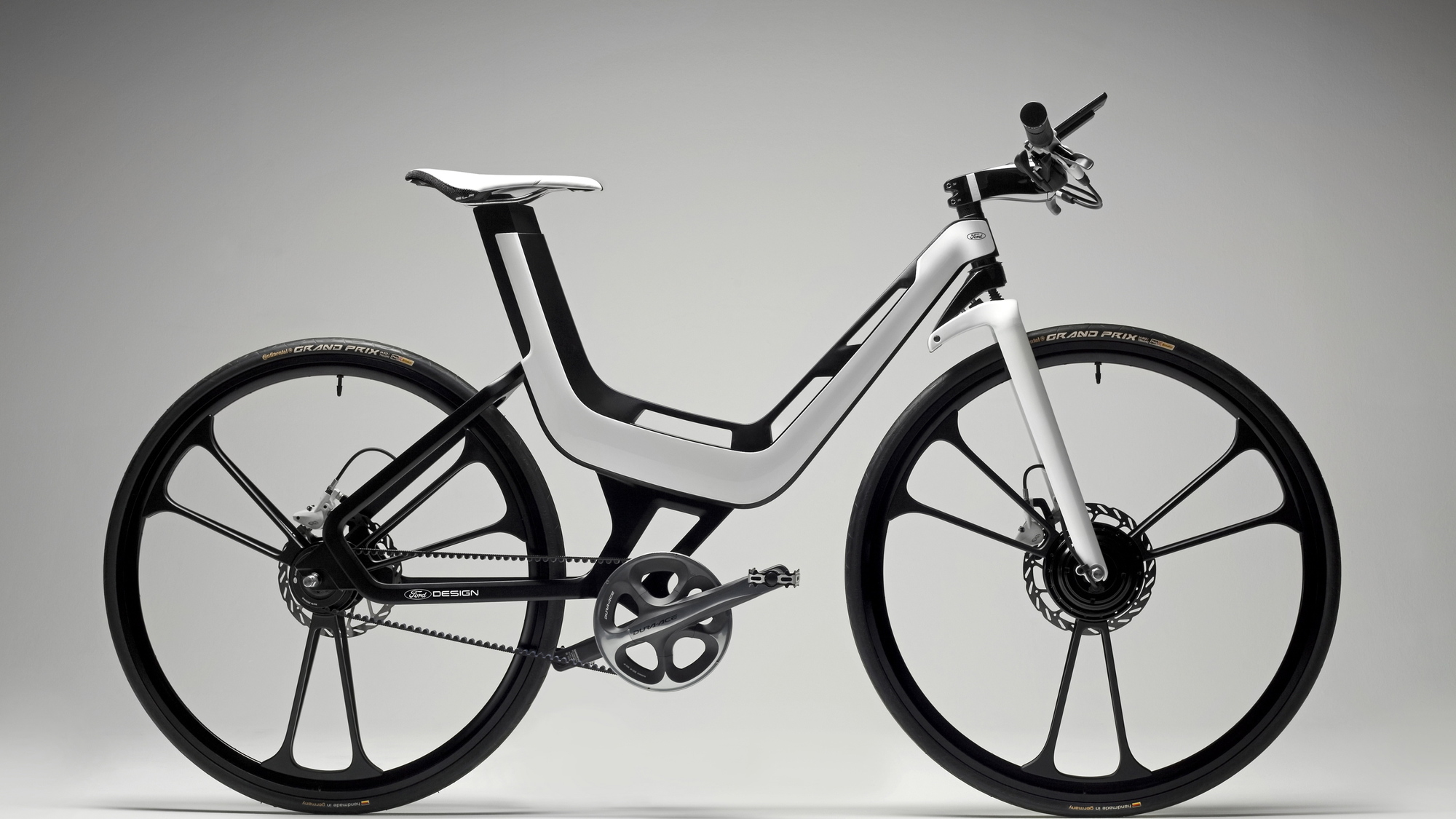 It isn't just the cars that are going electric at the Frankfurt Auto Show, currently open to the public until September 25.

Two-wheeled electric vehicles are popular too. Frankfurt show is very much focused on urban mobility - and having driven through the city during the press days last week, we're not surprised!

The major German manufacturers all used the show to preview small, urban electric vehicles, but many makers showed off electric scooters and the occasional electric bicycle too.

Downsides? There's no word on price yet, but we can't see it being particularly low. Many pedelecs seem to retail for at least $1,500, even for basic models. The eBike doesn't look basic...

Also making another appearance was the eScooter concept. As yet, this still seems no closer to production, but it's a pleasingly clean, modern design.

Think of a BMW scooter and you may remember the C1 - an odd scooter with a roof and seatbelts. The Concept E is more conventional in its styling, but also fits in well with the i3 and i8 concepts of future mobility.

The battery provides enough juice for around 62 miles of range and the electric motor should give enough power to keep up with 500cc and 600cc "maxi scooters". Charging from absolutely zero takes less than three hours.

Ford explains its decision to preview an E-Bike fairly easily: "The E-Bike market is growing very, very rapidly, with some 30 million units sold globally last year". The company has tried to apply some of its current design language to a two-wheeler, and ironically ends up looking better-resolved than some of its cars.

The frame is incredibly lightweight at 5.5 pounds, and range on electric mode is just under 53 miles courtesy of a 340 watt-hour lithium-ion battery. 80 percent charge comes up in 2 hours.

Also on the BMW stand was BMW Motorrad partner, Husqvarna, with an electric supermoto-style bike. It weighs in at only 176 pounds so should be light to maneuver.

Beyond that, there aren't many details about the bike, nor has Husqvarna confirmed whether it will make production or not. For the time being then, Husqvarna's claims that "urban traffic will seem like a videogame" are equally as virtual.

The E-Vivacity isn't all-new, but a conversion of one of French marque Peugeot's current best-sellers. As such it doesn't break any new ground, with a 37 mile range at 28 mph and no real styling flourishes.

It does feature four different operating modes, though: Normal, eco, walking pace and unusually for a scooter - reverse. At the very least, it'll make the average European city a little quieter than the current crop of two-strokes...

We'll save you the translation - it means e-Swallow. It's not particularly bird-like but it does have funky retro styling and larger wheels than the average scooter, good for stability on rough city roads.

It has a lithium-ion battery pack and comes in two speed variants - one that does 28 mph and the other, 50 mph.

Honda has gone for simplicity with its EV-neo, at the expense of performance and range. This means a poor top speed and range of 21 mph and 21 miles, but a full recharge in only 30 minutes.

The company is currently trialling the EV-neo in the Spanish city of Barcelona, where small scooters are abundant and the lack of speed is less of an issue. We couldn't see it catching on in the U.S. though.

Are EV bikes and scooters worth it?

There's no doubt that for devices of urban mobility, an electric scooter or bicycle is incredibly useful, often more so than an electric car. Range is often enough for shorter city journeys, and their narrowness means nipping through gaps in traffic is incredibly easy.

However, not all will be suitable for longer journeys. Top speeds of only 20-30 mph in some electric scooters limits them to strictly city use or quiet urban streets. The BMW Concept E would be an exception to this - with performance equivalent to maxi-scooters even highway journeys should be possible, providing your commute isn't too long.

Pedelecs like the Smart eBike make sense if you already commute on a bicycle. You get the best of both worlds - pedaling when you feel like getting exercise, but electric power if you want a more relaxed journey to work.

The only issue then may be price, the importance of which depends whether the bike would replace or simply supplement your regular car.