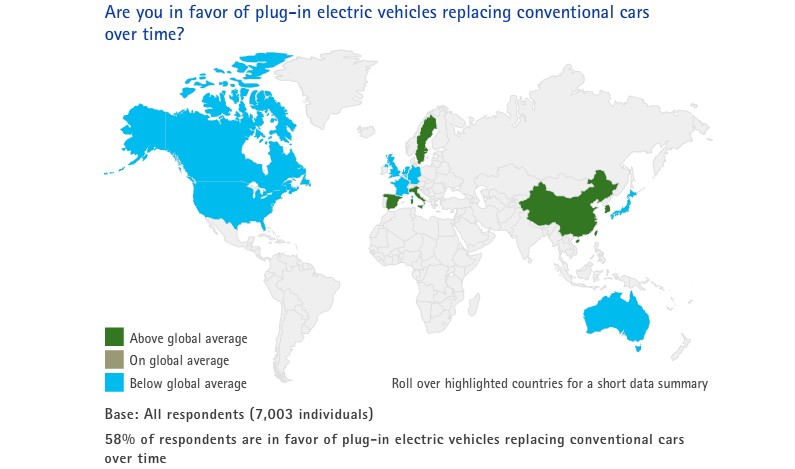 If you plan to shop for a new car this year, there will be a range of plug-in hybrids and EVs competing for your attention. But according to a new survey, only about 30% of you feel comfortable considering them -- and some of you are downright offended by their presence.

The news comes from consulting firm (and former Tiger Woods employer) Accenture, which recently issued a report entitled, Plug-in electric vehicles: Changing perceptions, hedging bets. It's a compilation of several thousand surveys conducted with consumers around the world, gauging their understanding of electric vehicles and the likelihood that they'll purchase one in the near future.

Over the course of its work, Accenture discovered four "themes" running through the survey data:

1. On average, consumers are curious about electric vehicles (though there are exceptions in certain locations and age groups).

4. Charging preferences and habits could prove challenging to the infrastructure.

But then, if you're a regular reader at GreenCarReports, you already knew most of that. And so, in the interest of making your Tuesday a little easier, we've dug deeper into Accenture's report and pulled out the more salient bits. Here are a few of what we'd call the "high points":

• 70% of consumers don't understand electric vehicles (plug-in hybrids or full EVs) well enough to consider them for their next purchase.

• Consumers in China, U.S., Sweden, Holland, and the U.K. understand electric vehicles than elsewhere -- though even in China, where shoppers seemed most-informed, only 44% said they felt confident in their understanding of the technology.

• 58% of consumers are in favor of electric vehicles replacing conventional cars over time, with only 13% are staunchly opposed. Interestingly, in China, the figure was 88%, while the U.S. rang in at just 48%.

• An impressive 60% of shoppers who plan to buy a new car within the next decade intend to look at electric options. In China, that figure was 95%, while in the U.S., 67%. Holland -- which we in America tend to consider pretty green-minded -- only registered 41%.

• Logistically, the most important electric vehicle considerations for consumers are the ability to charge at home, battery range, and the total cost of operation when compared to a conventional car.

• As far as incentives go, consumers would be most swayed to purchase an electric vehicle by paying no sales tax and being offered free parking. (Lots of commuters were included on the survey, apparently.)

• One of the more interesting facts: 48% of those surveyed said that they'd want to know how the electricity powering their car would be generated (an important consideration for those truly concerned about environmental impact). In China, the figure hit 62%, but in the U.S., just 43%. On the brighter side, younger respondents were more concerned than their elders.

• Given a choice between a plug-in hybrid and a full EV, a whopping 71% would take the hybrid.

• 62% of those surveyed would want to charge their car's battery when depleted, but an impressive 38% would chose to swap it out for a new one. (That's good news for Better Place.)

There are, however, some major caveats we should point out -- particularly when it comes to the survey's poll sizes.

In all, Accenture interviewed 7003 respondents in 13 countries: Australia, Canada, China, France, Germany, Italy, Japan, Netherlands, South Korea, Spain, Sweden, the United Kingdom, and the United States. Of those, all were drivers, and 97% owned automobiles.

Accenture interviewed approximately 500 consumers per country, which would seem like a tiny sample size in Holland, much less China. For reasons unknown, Accenture chose to interview 1,000 consumers in the U.S. However, the company insists that its samples were "representative of the general population, in terms of gender, age and income in every country, with the exception of China, where the sample was representative of the urban population."

Translation: this isn't a definitive study -- not by a long shot. But it's an interesting starting point for others to begin gauging perceptions of electric vehicles.

If you'd like to skim through the data yourself, you can find an overview and the full PDF at Accenture's website. And we're sure we don't have to tell you to share your own feelings about the future of electric vehicles in the comments section below.