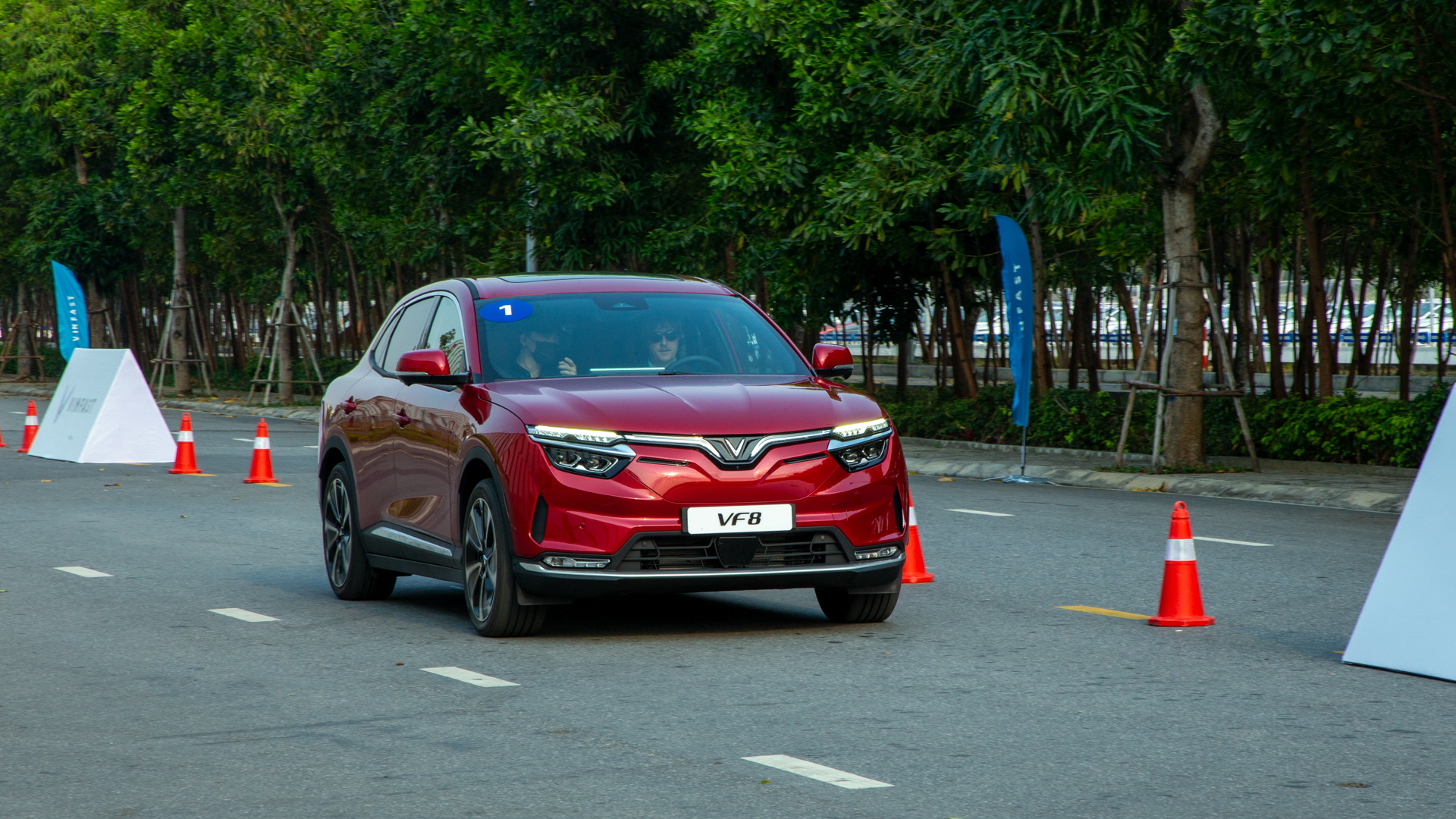 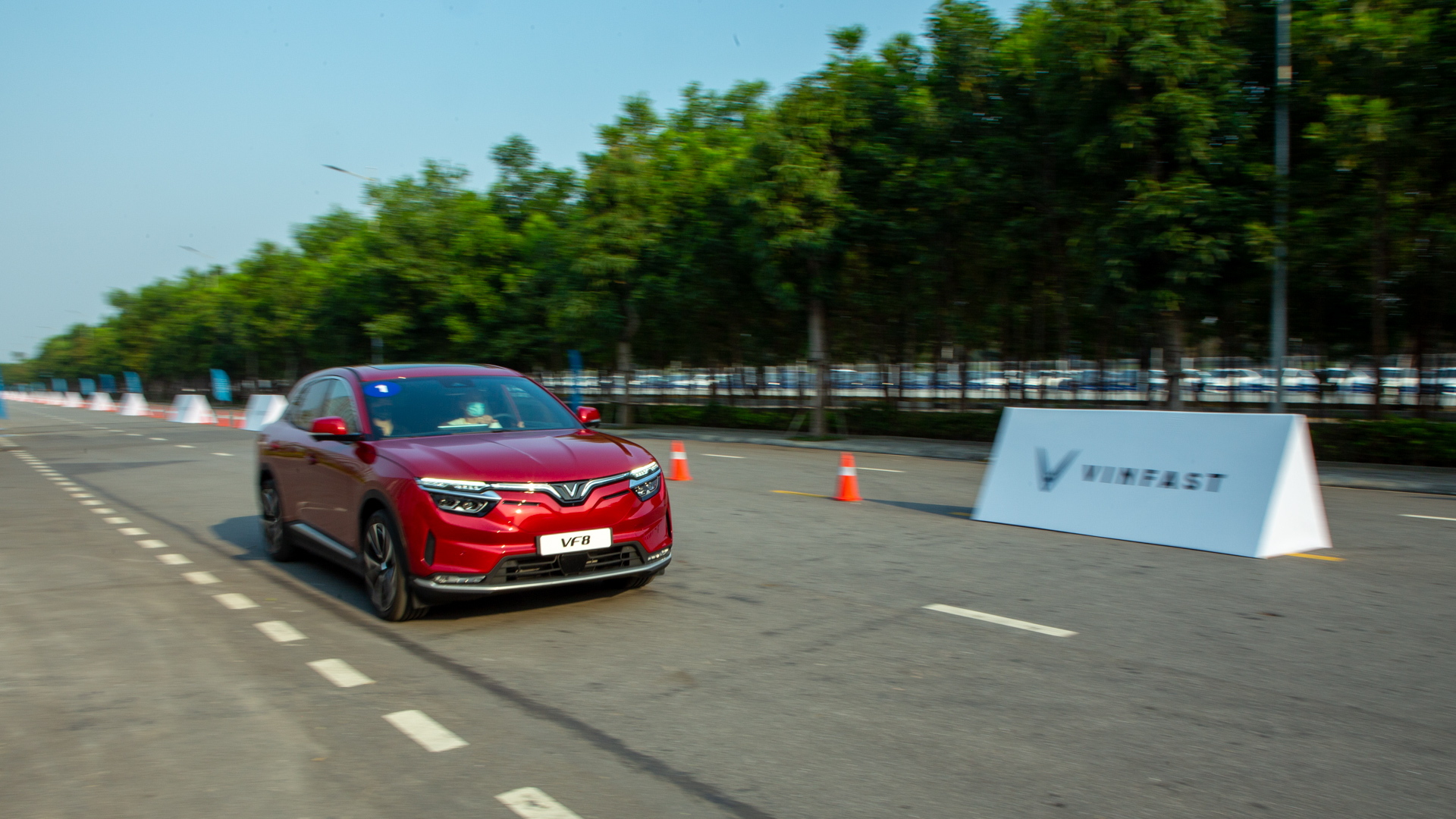 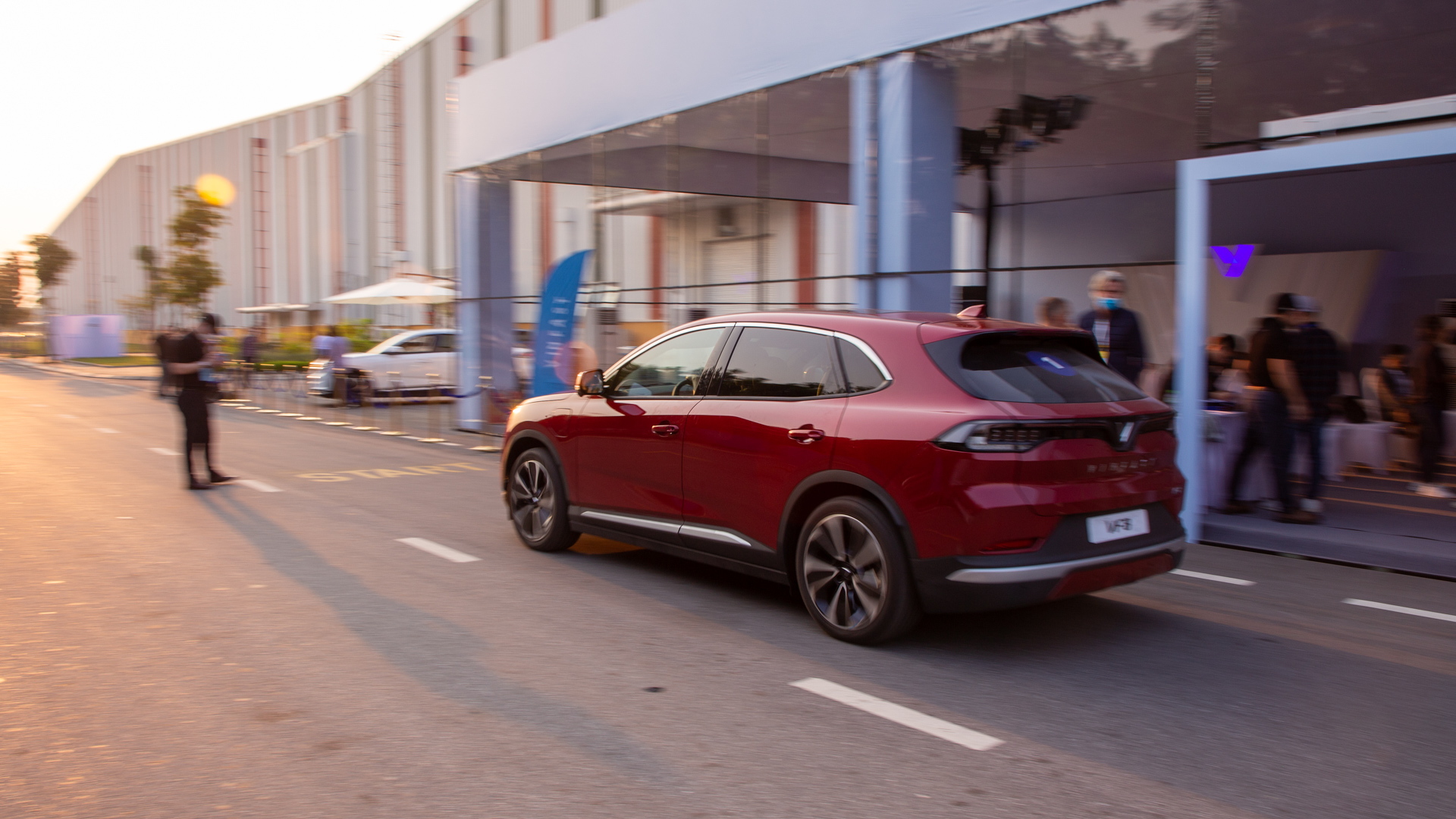 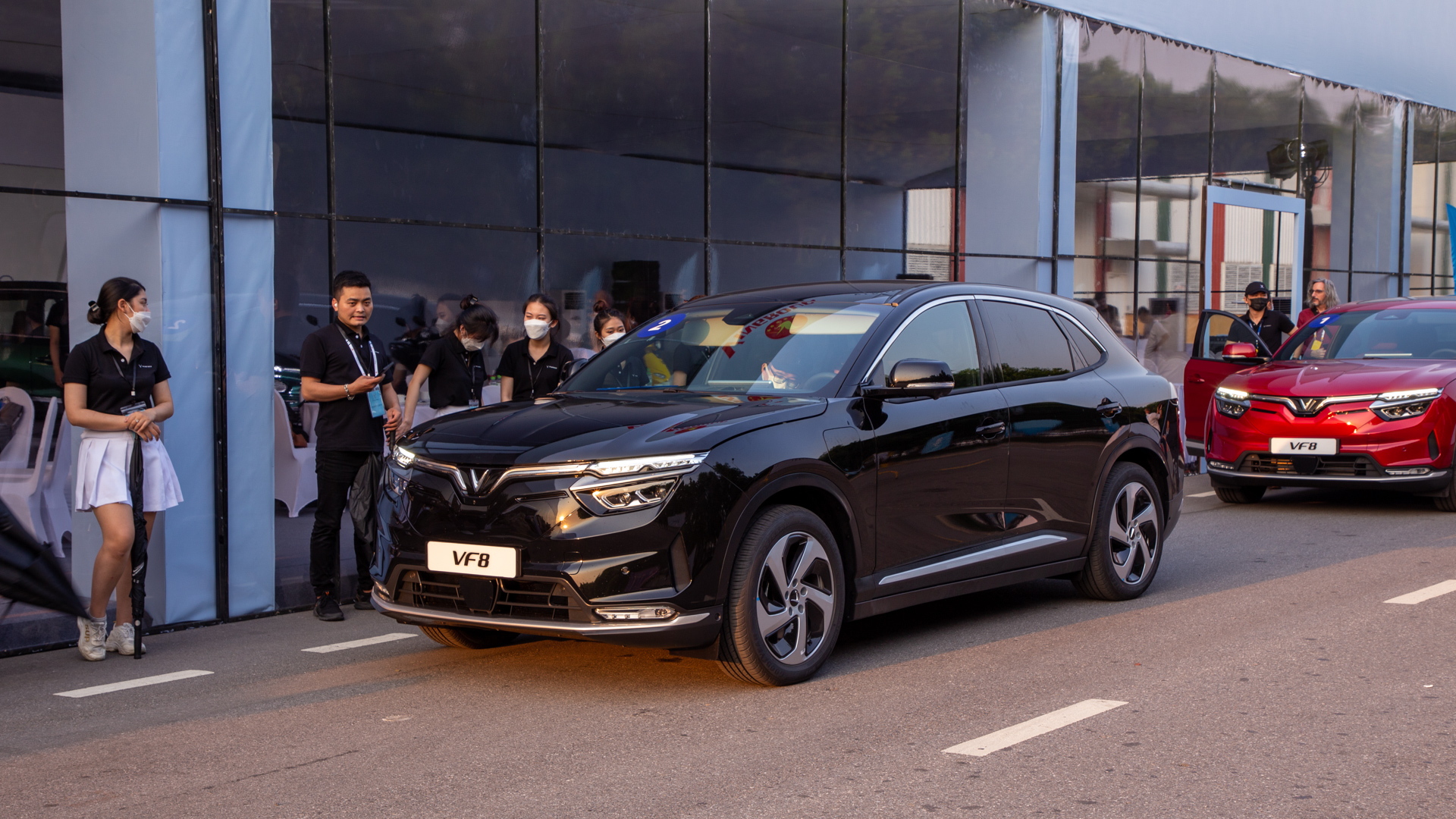 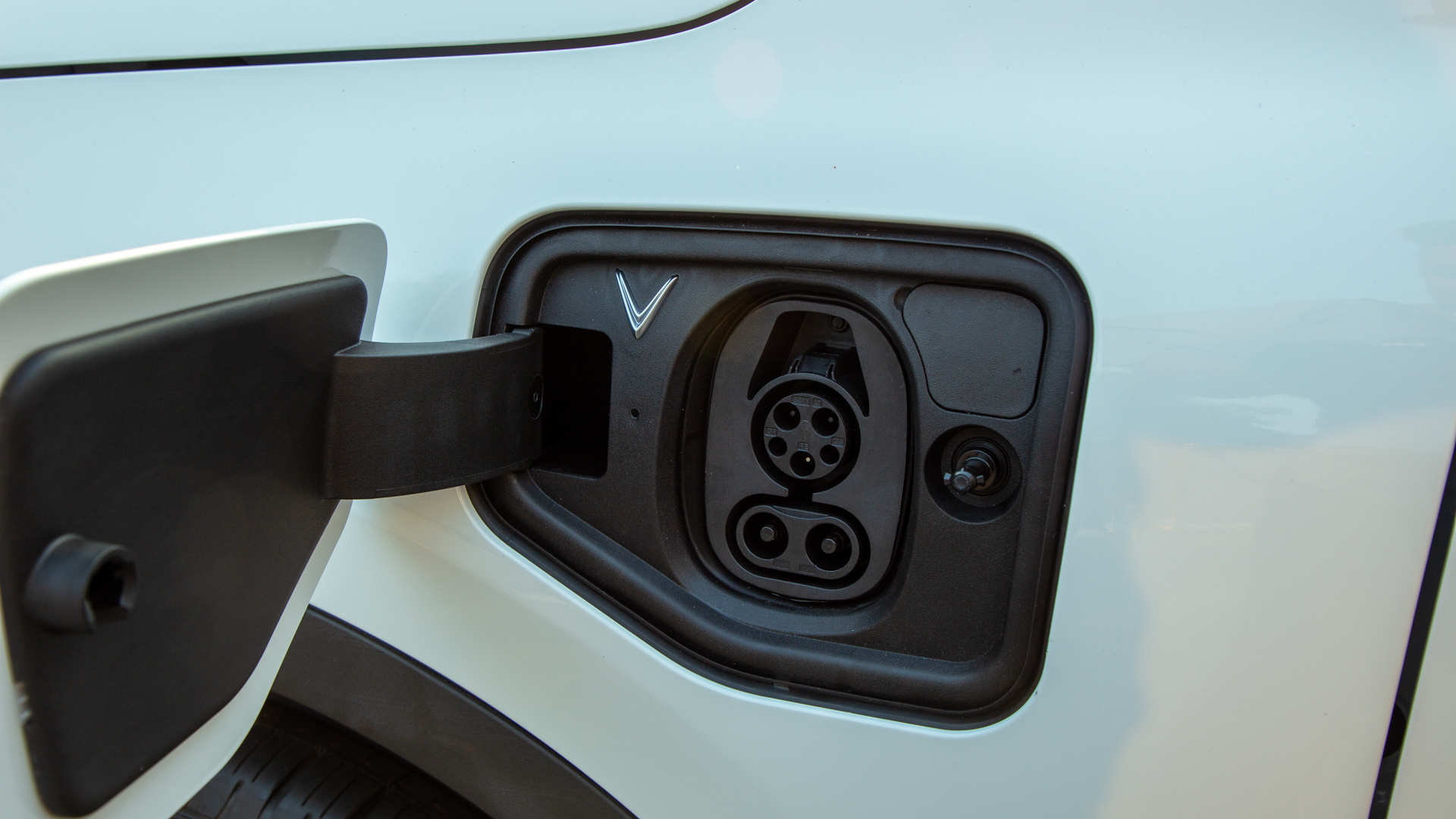 “So, how fast can I really go?” I ask the Vinfast handler sitting next to me in the passenger seat of the VF 8 prototype. I’ve been told before my first chance around the short test loop to keep it under 80 km/h (or right around 50 mph) but as I get ready for my second run I’ve seen a few other drivers zip by at much higher speeds.

Instead of a number, I am greeted by a shrug—so before he can change his mind we are off.

The first run was too conservative to give me definitive impressions, and I’ve traveled 18 hours to get here, so it’s time to cut it loose. This time on the straight I get the speedometer up to near 145 km/h (90 mph) and get a much better sense of the VF 8’s performance and braking—and some reassurance that this is more than a showpiece.

Likewise, the company is moving fast. The fact that the company has fully drivable prototypes after only introducing the vehicles about six months ago is laudable. But the company’s aggressive timeline for launching these vehicles—incredibly, this year—also means that despite that progress, there’s still a lot of work to be done to get them ready in a short period.

I’ve traveled to Vietnam alongside a group of journalists, investors, and customers to see the Vinfast facilities and get our first seat-time in a VF 8 prototype. Our long journey to Hai Phong, Vietnam resulted in around five minutes behind the wheel of the VF 8 (by far the highest ratio I’ve ever had of travel time to driving time). But we have a lot of questions about this new EV automaker that need some answering.

Our short drive loop is on a course setup next to the Vinfast manufacturing facilities, and it only consists of two long straightaways, bookended by a wide U-turn at one end and a small chicane into a tight left turn at the other end. I took both runs in a red VF 8 prototype that Vinfast says was the most developed of the three vehicles available on the day, which all apparently came from different points in the VF 8’s development cycle. One of those models would encounter a braking issue and be removed from the rotation by the end of the day.

Each of the prototypes available to test were dual-motor all-wheel drive vehicles, and the model I tested was a Plus trim that is outfitted with more powerful motors that produce 402-hp and 457 lb-ft of torque, compared to 348 hp and 368 lb-ft in the Eco models. It was also outfitted with the smaller, standard range 82-kwh (usable) battery.

Vinfast estimates a 0-62 mph time of around 5.5 seconds for the Plus, and that feels accurate. It doesn’t offer the same super-snappy off-the-line acceleration you get in the Tesla Model Y, but it’s at least as quick as a dual-motor VW ID.4. The speed builds quickly enough and the VF-8 powers up to around 100 mph with relative ease. The throttle tuning is in need of a lot of refinement, at tip-in there isn’t enough responsiveness and on my first run when I just kept pushing the throttle down after the VF 8 didn’t move for a beat it lurched forward with a jerk that startled the same Vinfast employee in the passenger seat I’d ask later to exceed the posted speed limits. I raised a hand to apologize (my Vietnamese isn’t great) and he waved me off with a laugh, I’m guessing I wasn’t the first one that day to do that to him.

Vinfast engineers indicated that the vehicle will have more regenerative braking options down the line, including a one-pedal driving mode, but those were not ready at the time (even though I found those modes in the menus when I played with the screen more on a static prototype). The regeneration that was present on the prototype was very light and allowed for sustained gliding as an ICE vehicle would. Similar to the lack of throttle responsiveness, the brake pedal wasn’t responsive enough at the top of its travel and slowing down quickly and smoothly was difficult. With regen so light, it was impossible to get a feel for the brake-blending, that’s something we’ll have to get another look at later.

The road we drove on was perfectly maintained so it didn't provide an opportunity to see how the VF 8 will handle pavement imperfections, but on a good surface the SUV rode well and the cabin was well insulated from wind and tire noise. The suspension was sprung softly, with very noticeable body roll especially when exiting the chicane into the tighter turn, as the tires started to protest very quickly. Some added stiffness to the front springs would be very welcome.

Similar to the suspension, the steering also felt light, though it seemed to track well on center. There wasn’t much feedback to speak of but the brief time behind the wheel wasn’t quite enough to get a good sense of the car’s dynamic tune between the steering/suspension.

I poked around the interior of the prototype I tested, as well as a static version that Vinfast had available for photographs and to try out the infotainment system. Each had some of the usual caveats that we’d attach to hand-built prototypes with inconsistent panel gaps and materials, but the design of the interior seems to be finalized.

The VF 8 opts for a very simple dash setup that the VF 9 will use as well, with a 15.6-inch touchscreen serving as the main hub for everything. There is no instrument panel, but there is a standard head-up display so you don’t have to shift your head to look at the center screen to know your speed each time. This is somewhat similar to the Tesla Model 3 setup, but there are also more controls on the steering wheel to help control audio and safety features, like the adaptive cruise control (also standard).

Size-wise, the VF 8 is roughly the size of a Ford Mach-E but has a better backseat that feels more spacious. It has plenty of room inside for four adults, but the center passenger will have to contend with a floor hump for some reason. It’ll be hard to get a full gauge of interior quality until we get something closer to a production version and more time to see how the seats hold up on longer stints. The infotainment system at least felt a bit more complete, all of the functionality may not have been turned on but the screen was snappy and the screens were intuitive, if a bit too wordy (see the safety feature menus above).

Vinfast has announced preliminary pricing for the VF 8 and the VF 9, as well as how much the battery subscriptions required to purchase each vehicle will cost. A VF 8 Plus with the smaller battery pack will start at $47,700 (not including destination charges as those have yet to be finalized), though the larger battery version will only cost $48,000 so I don’t really see a reason at this time to go for the standard battery.

The company also doubled down on its plan to begin deliveries on both the VF 8 and VF 9 by the end of the year. That still feels ambitious for the VF 8 given how much more work it needs, let alone the VF 9, which we’ve yet to drive or even see a prototype with a complete interior.

Our next seat time in the VF 8 won't happen until this summer. If the team at Vinfast is able to improve these drivability and tuning issues markedly by then, it would be a big signal that the company’s aggressive timelines and plans for massive expansion could actually come true—if we momentarily wear our blinders about supply chains, manufacturing ramps, compliance, and delivery and support logistics. On top of that, there are also details that need to be worked out with the battery subscription program and the related liability with insurance companies.

This is a long list of to-dos even if the VF 8 felt more ready and we’ll be keeping an eye out on how Vinfast is able to navigate those issues, while waiting to get more time behind the wheel in June.