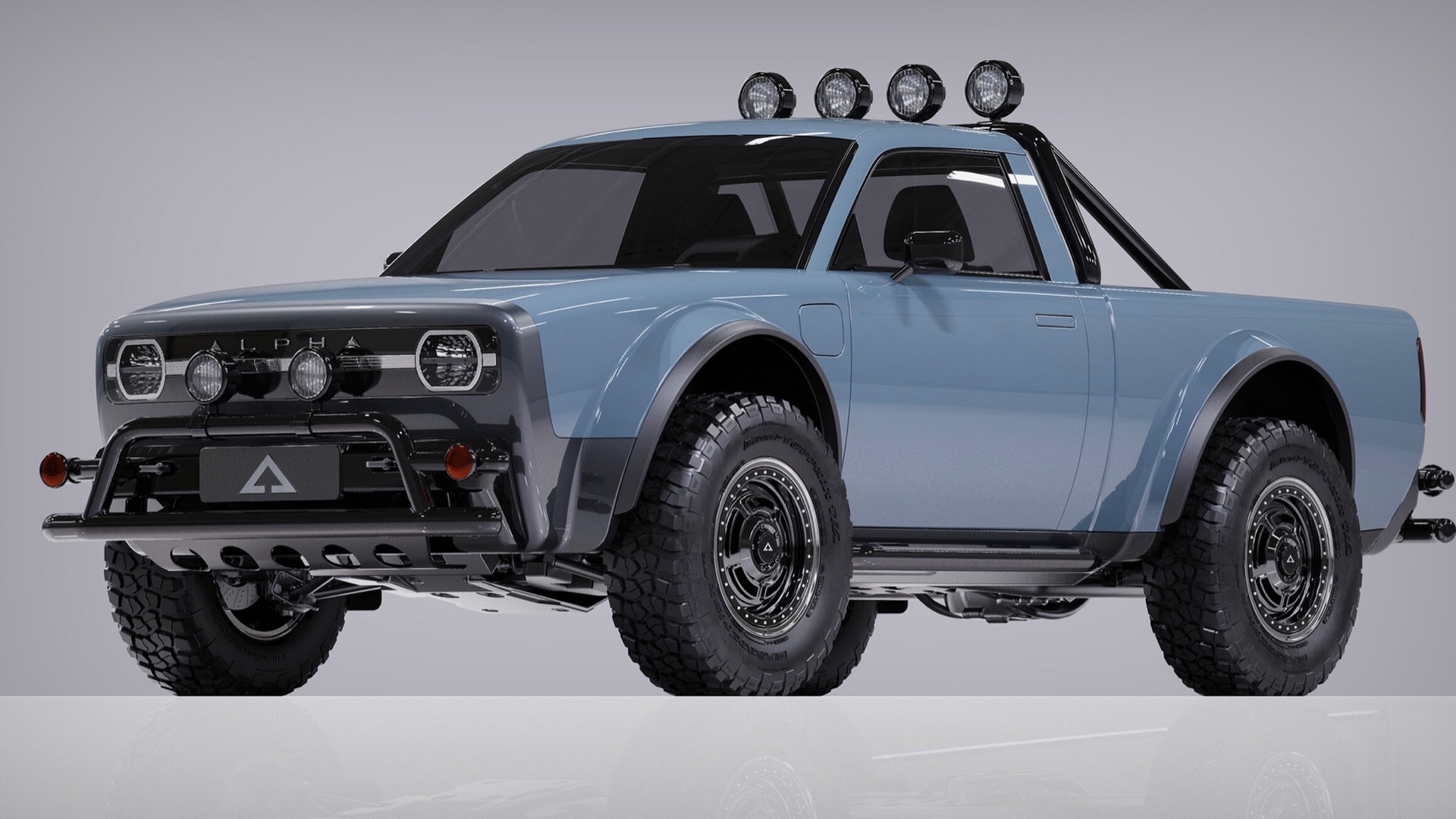 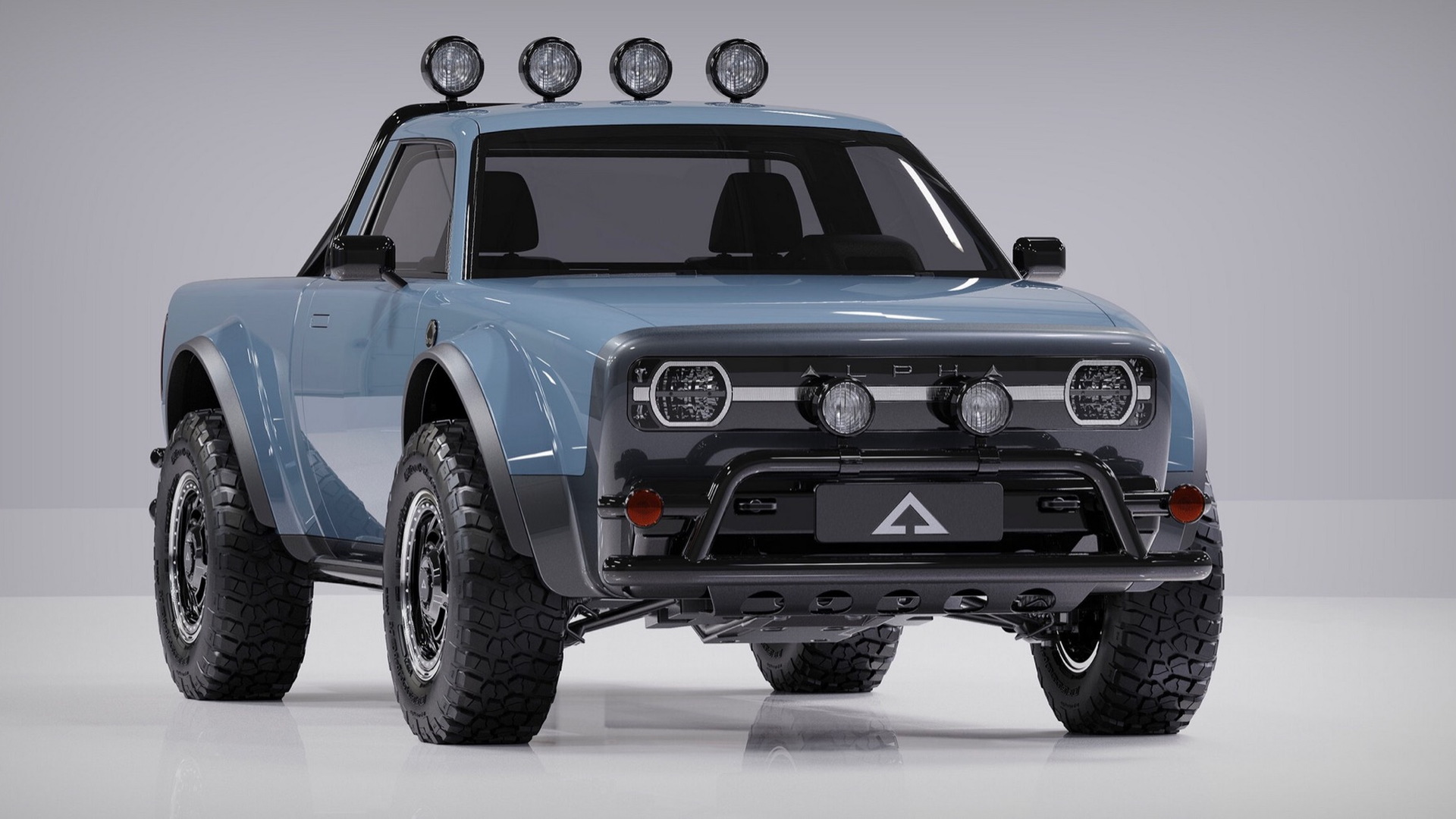 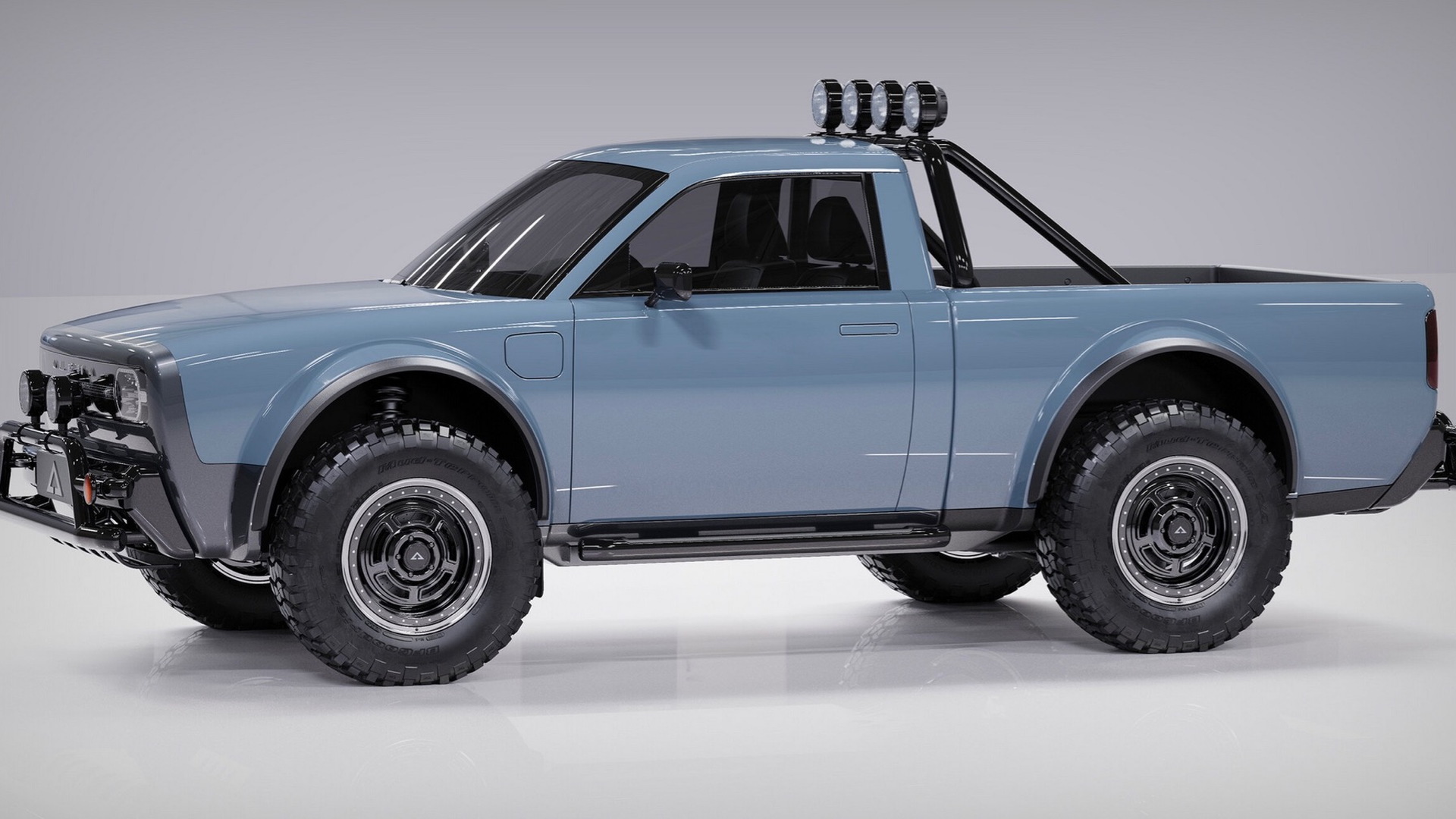 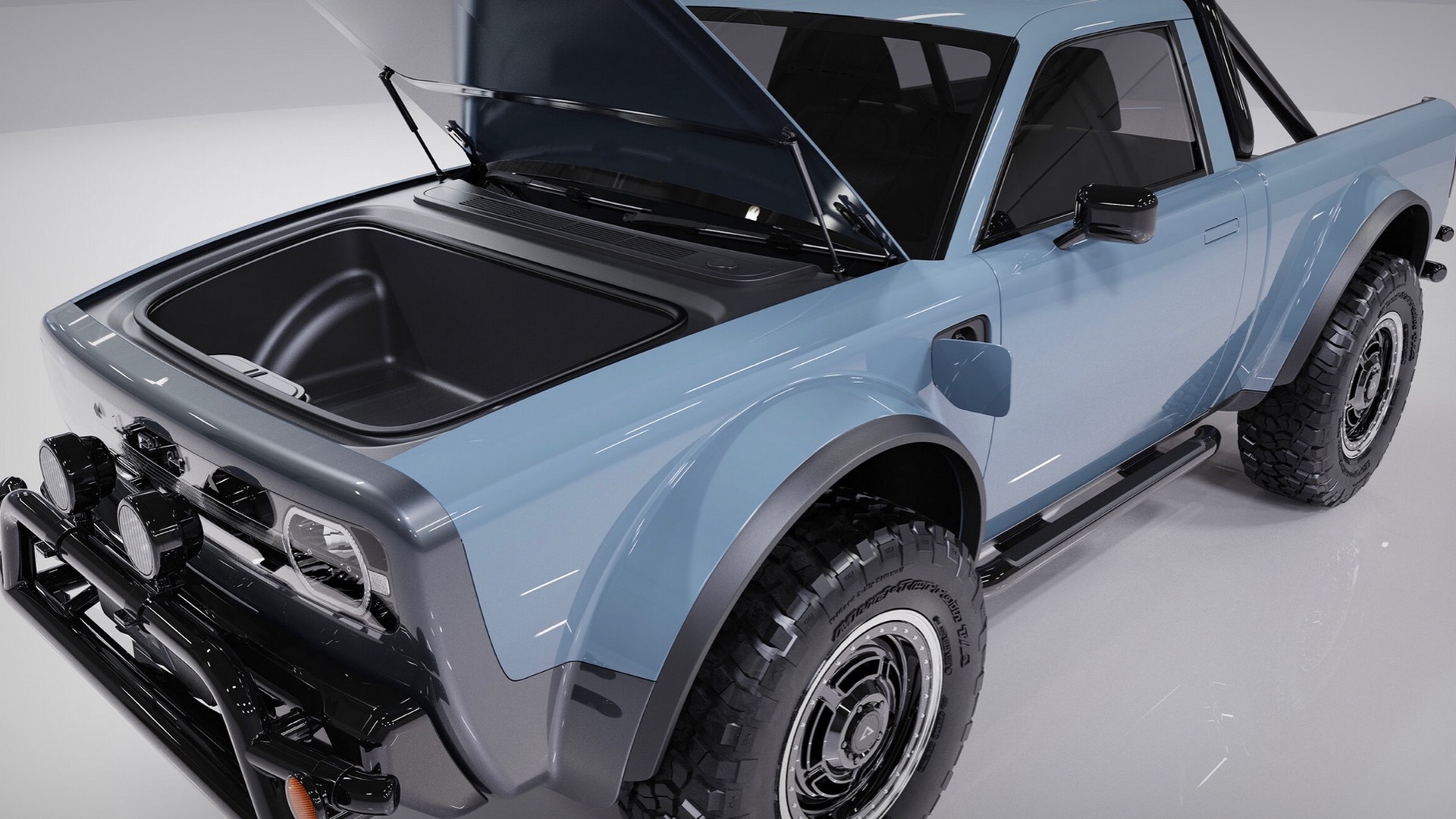 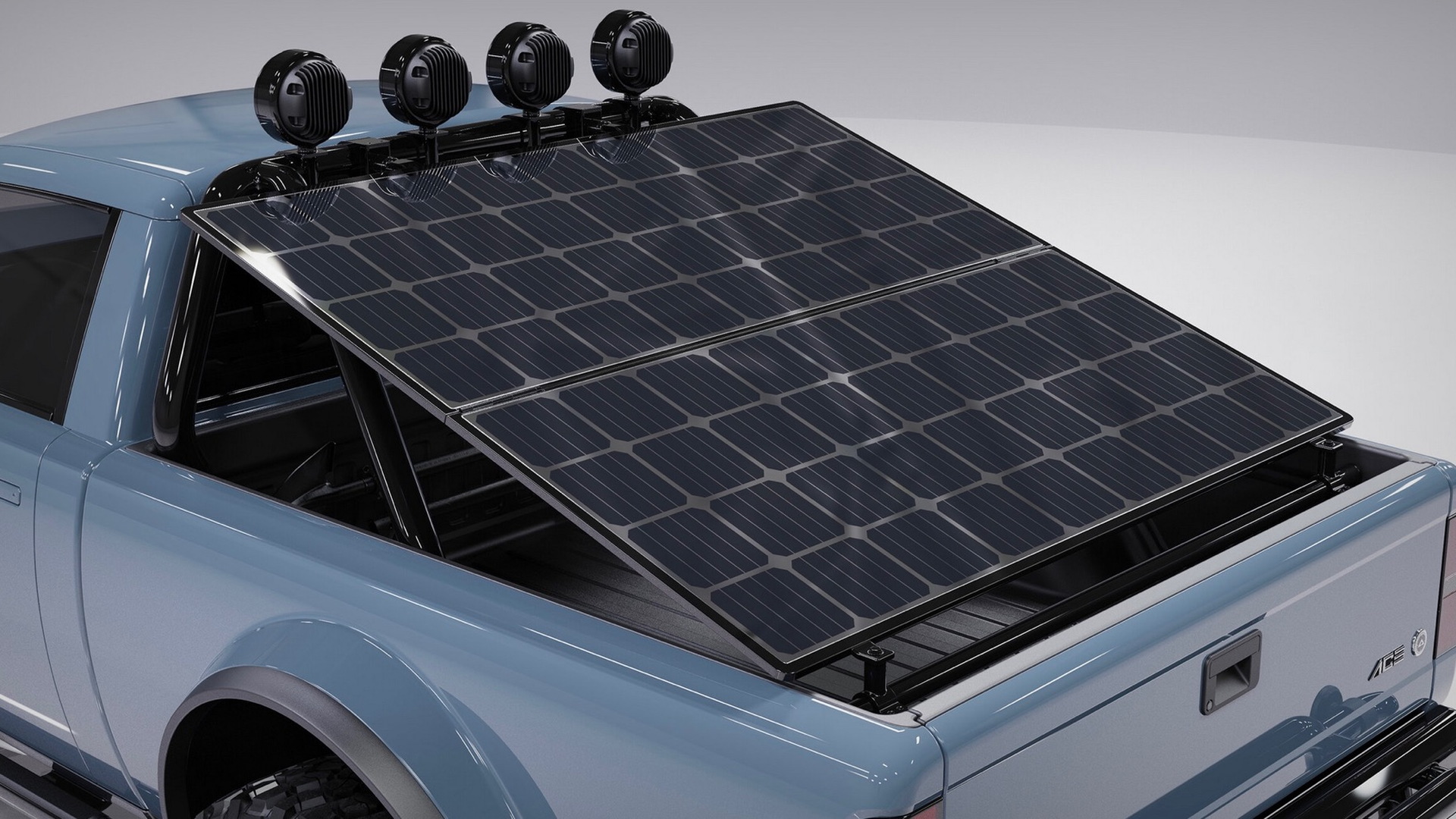 Alpha Motors stands out among the many current EV startups by bringing a retro-cute styling sensibility to its vehicles. The startup's latest EV is a pickup truck called the Wolf, joining the Ace coupe and Jax crossover coupe.

The Wolf continues the same styling theme as the other two models which, on a truck, most closely resembles old Japanese compact pickups. To our eyes, it seems like a throwback to the original Chevy LUV (light utility vehicle) of the 1970s, itself a product of Isuzu.

Under the sheetmetal, the Wolf appears to have the same powertrain options as the Jax, meaning single-motor front-wheel drive or dual-motor all-wheel drive configurations. Alpha estimates 250 miles to 275 miles of range, 0-60 mph in 6.2 seconds, and a 3,000-pound towing capacity.

Like the Ace and Jax, the Wolf has a "frunk" for added enclosed storage space, but images posted on Alpha's website also show a solar bed cover, plus a light bar that really drives home the retro styling theme.

Alpha is currently taking reservations, and quoting pricing between $36,000 and $46,000, but the company hasn't delivered a single vehicle yet, and isn't expected to start deliveries until 2023. It's becoming typical of EV startups to announce plans for multiple models before the first one is even out the factory doors.

The Wolf isn't the only pickup to present a downsized but dramatically different vision of electric trucks. Just before it was revealed, Canoo unveiled its own electric pickup, based on a "skateboard" chassis that will also be used for a delivery van and subscription-based people carrier.

Canoo's truck features a cab-forward design reminiscent of a Volkswagen Type 2, plus a 200-mile range and 600-horsepower dual-motor all-wheel drive powertrain. Volkswagen, incidentally, sidelined its plans for a compact pickup for America—although the idea might come back all-electric, according to recent reports.

Canoo hasn't delivered any vehicles to customers either, but it has at least shown running prototypes of its people carrier and the naked skateboard chassis. Alpha has only shown images so far. It hasn't responded to queries from Green Car Reports about funding, development, or its executive team, so at this point it's just a very good-looking set of concepts.

Both the Alpha and Canoo pickups are truly compact—something that hasn't been seen in the United States for some time. That distinguishes them not only from internal-combustion trucks, but from the numerous proposed electric trucks as well. The Tesla Cybertruck, for example, is so huge it might not fit in some garages.

Rivian is also targeting a different kind of truck buyers, with its R1T focusing on towing, hauling, and off-road ability. However, the R1T has more conventional styling, and is closer in size to current midsize pickups.