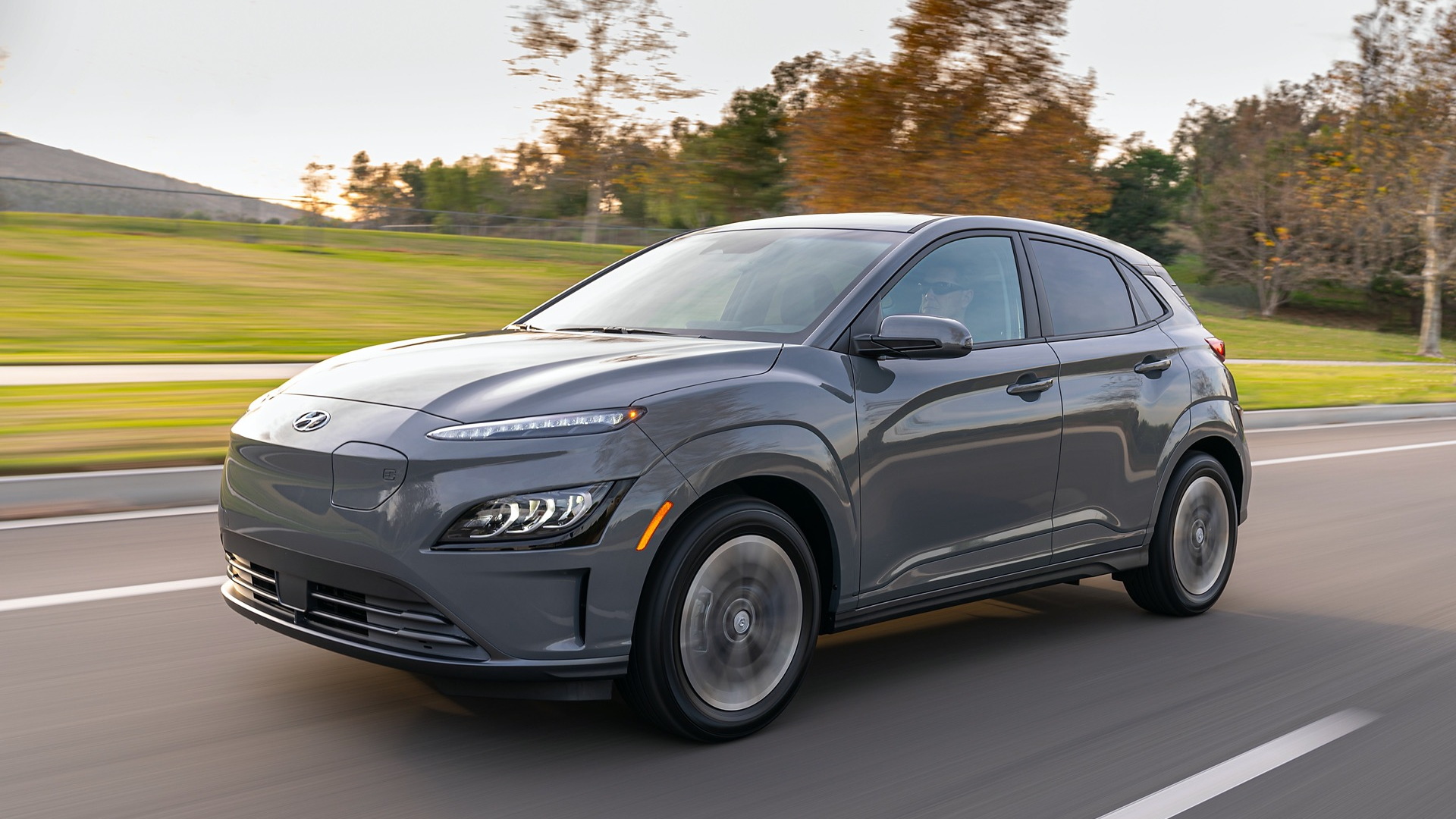 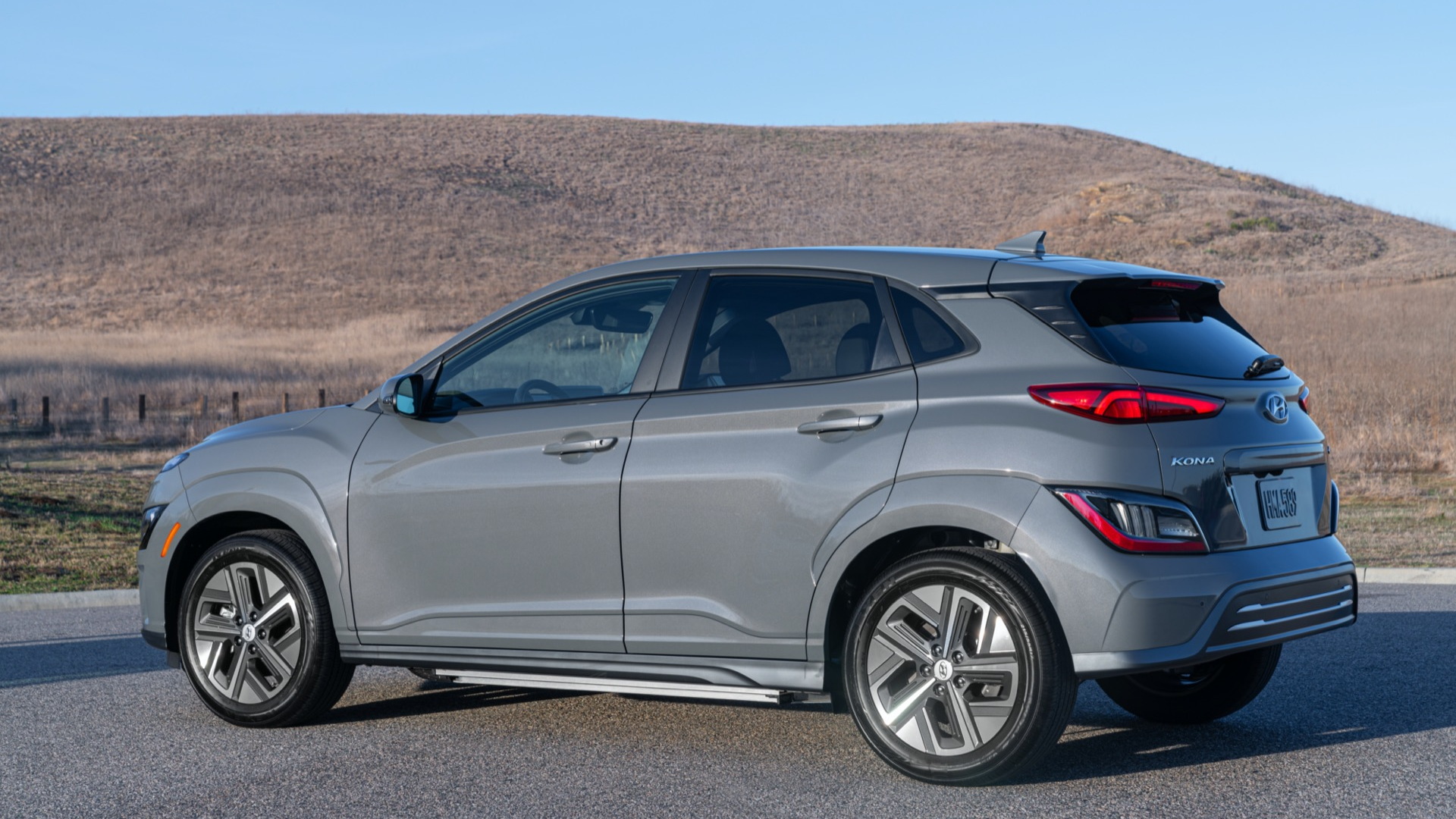 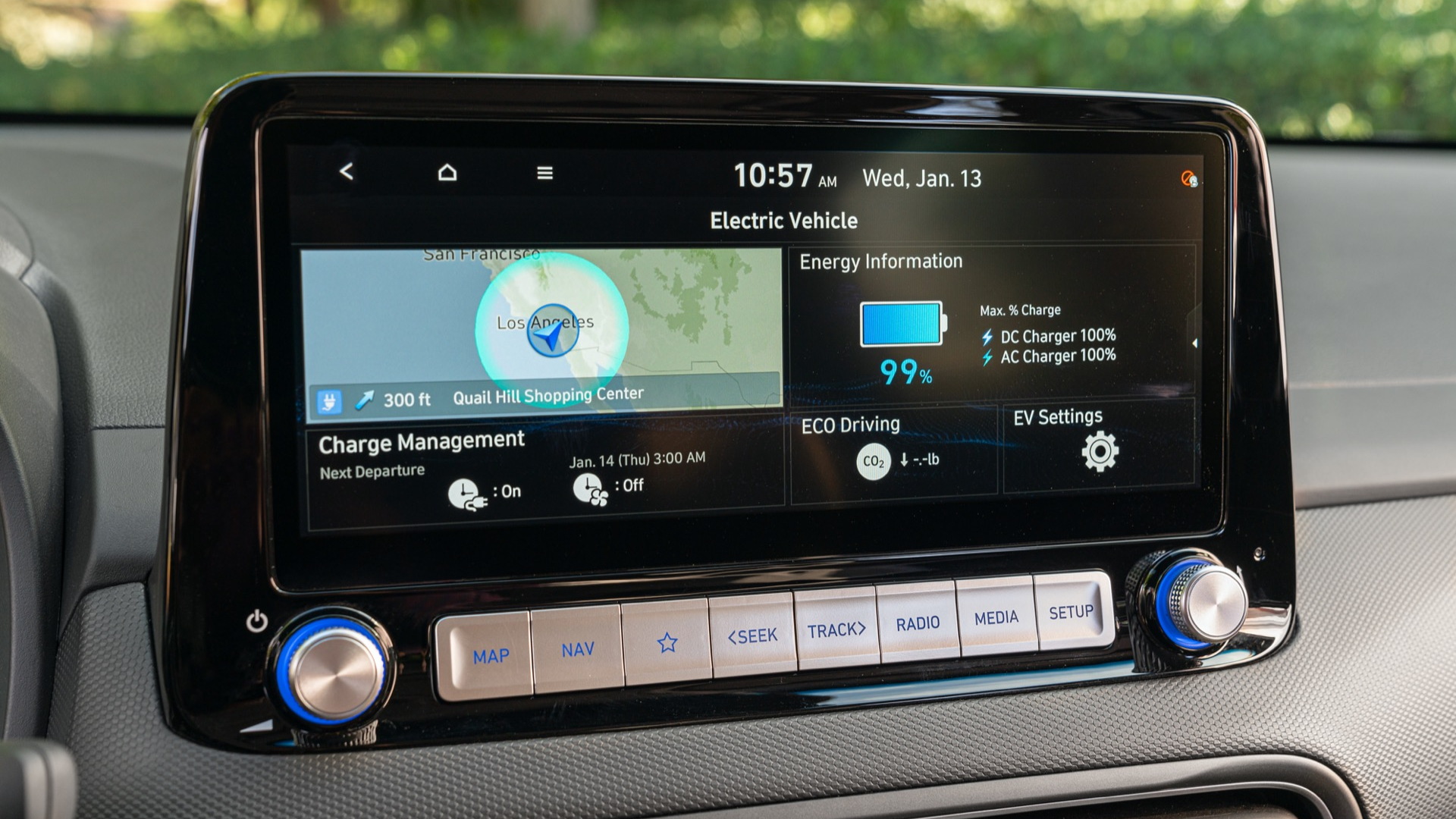 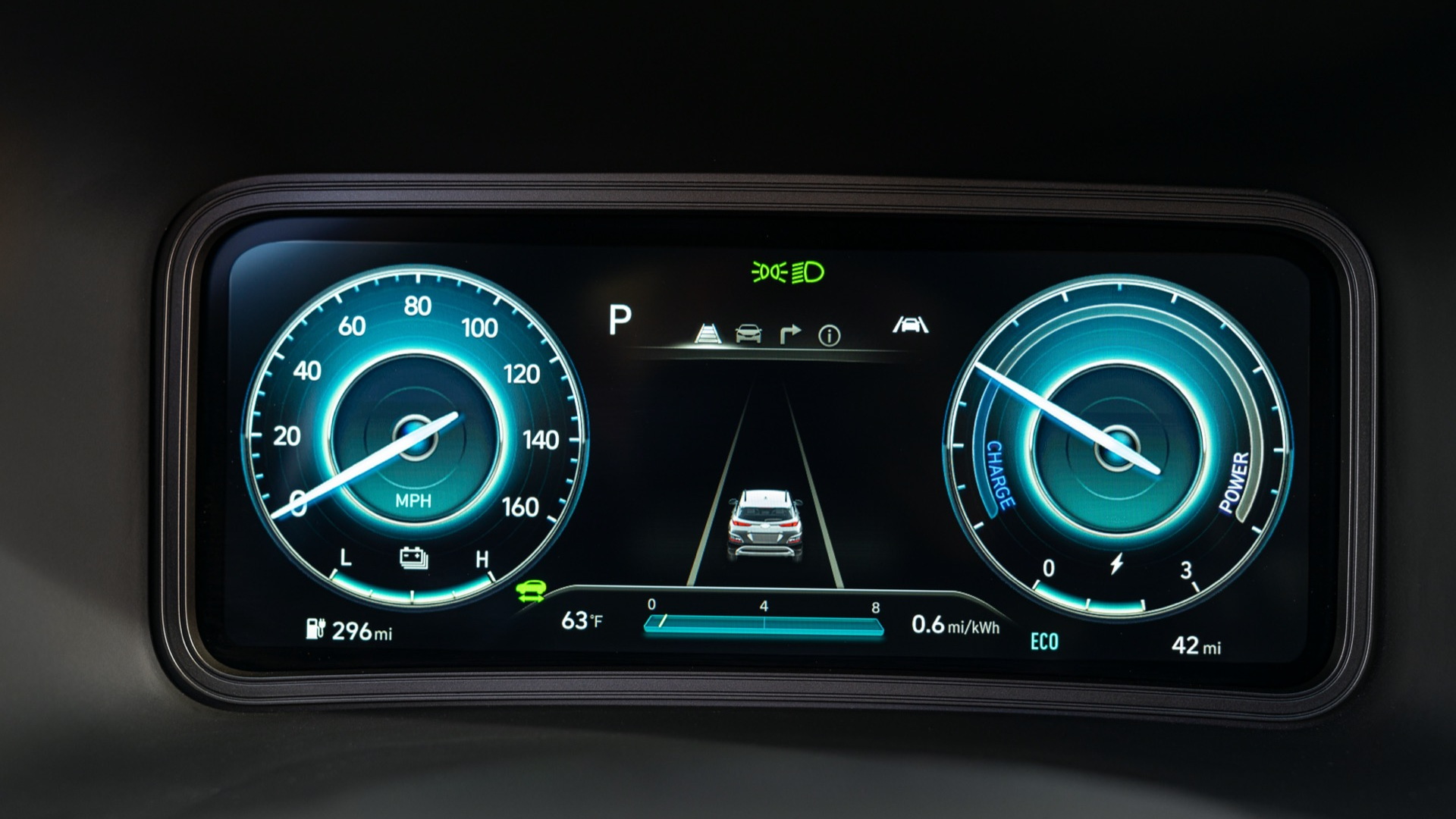 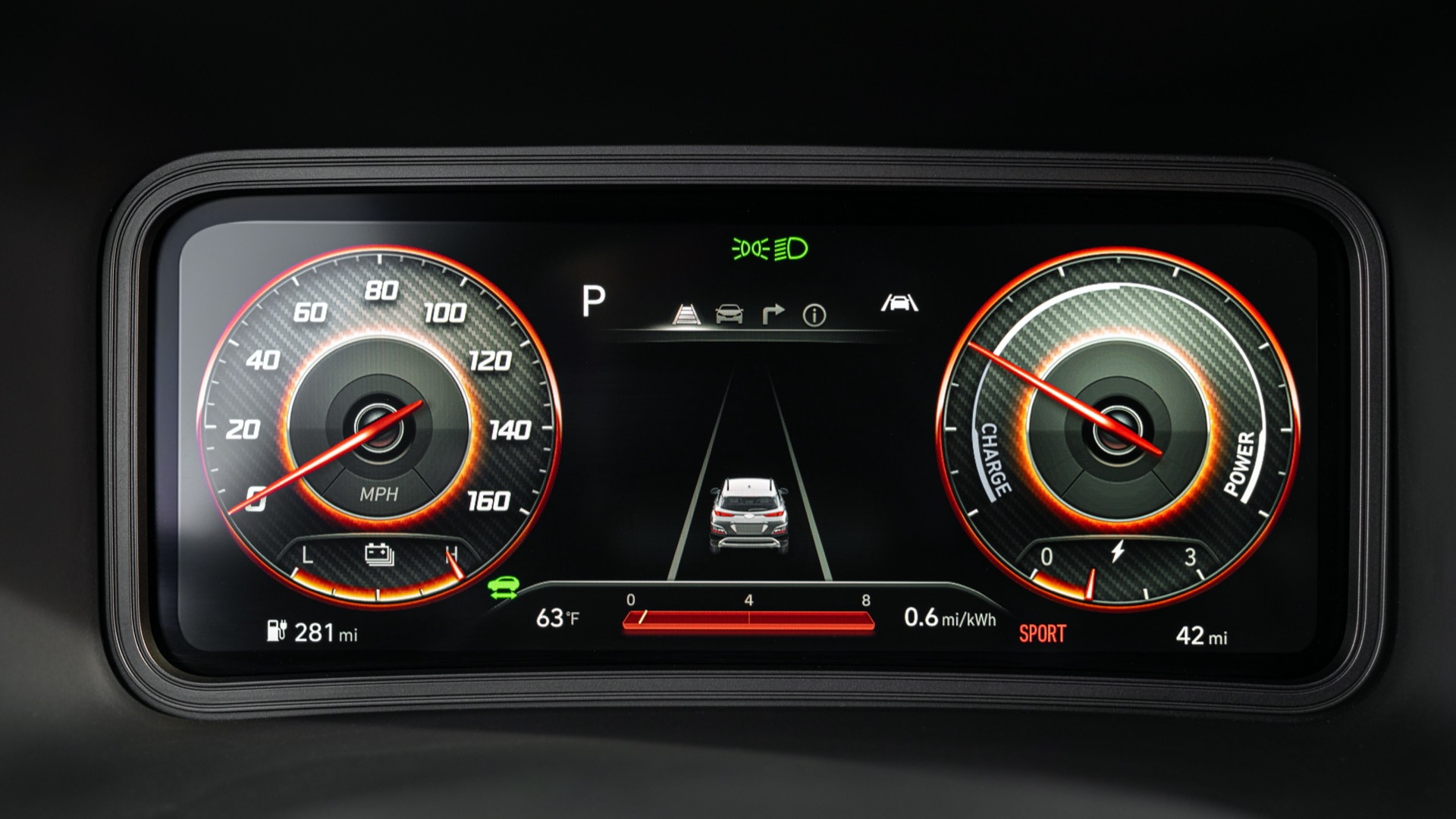 Hyundai on Tuesday announced a 2022 model year refresh for the Kona Electric, which was its first fully battery electric SUV available in the U.S., starting in 2019.

Most notably, the 2022 Kona Electric dashes the dimpled look and loses the legacy hints of an engine under the hood. Instead, the new model has a sharper, smoother, and less busy front-end appearance that some might say echoes the grilleless treatment given to the Tesla Model 3 and Model Y.

The simplification isn’t just at the upper grille. Around the corners of the car the look is cleaner, too—although headlights and running lamps remain split into a two-tiered setup. In back, the Kona Electric’s lower lights have a new design that flows more cleanly into the flare around the wheel. A new alloy wheel design helps with aerodynamics.

The revamped Kona lineup is 1.6 inches longer overall, but it’s all from those front and rear treatments. Inside, the revamped Kona Electric carries over its fine textures and silver-faced dials and buttons, but its lower console storage gets wireless charging and a new design. A revamped instrument cluster and upgraded 10.3-inch infotainment system round out the changes.

The core numbers haven’t changed, though. The Kona Electric delivers 201 horsepower and 291 pound-feet of torque through the front wheels. Four regenerative braking modes allow a “0” mode for true coasting, while the top “3” is close to one-pedal driving.

In drive reviews of the Kona Electric, we’ve noted the model’s sporty, well-balanced handling feel that makes this model feel friskier than its 0-60 mph time of 7.6 seconds might suggest. That might partly be due to the Kona Electric’s trailing-arm independent rear suspension, an upgrade over the torsion-beam setup in the gasoline car.

With the modestly resculpted front and rear, range and efficiency might change slightly but insignificantly for this model. The Kona Electric is also one of the highest-rated electric crossovers in terms of efficiency, and for 2021 it comes with a 258-mile range rating and 120 MPGe combined rating. Its 64-kwh battery pack can be recharged from 10% to 80% in just 47 minutes, according to Hyundai—reaching a peak charge rate of just past 70 kw, hardware permitting. With its 7.2-kw onboard charger, it can get from 10% to 100% in about nine hours.

Hyundai says that the refreshed Kona lineup—including the Kona Electric—will arrive later this spring. That will give it a head start prior to the arrival of an upscale Ioniq 5 electric SUV that premieres February 23 and arrives later in the year.