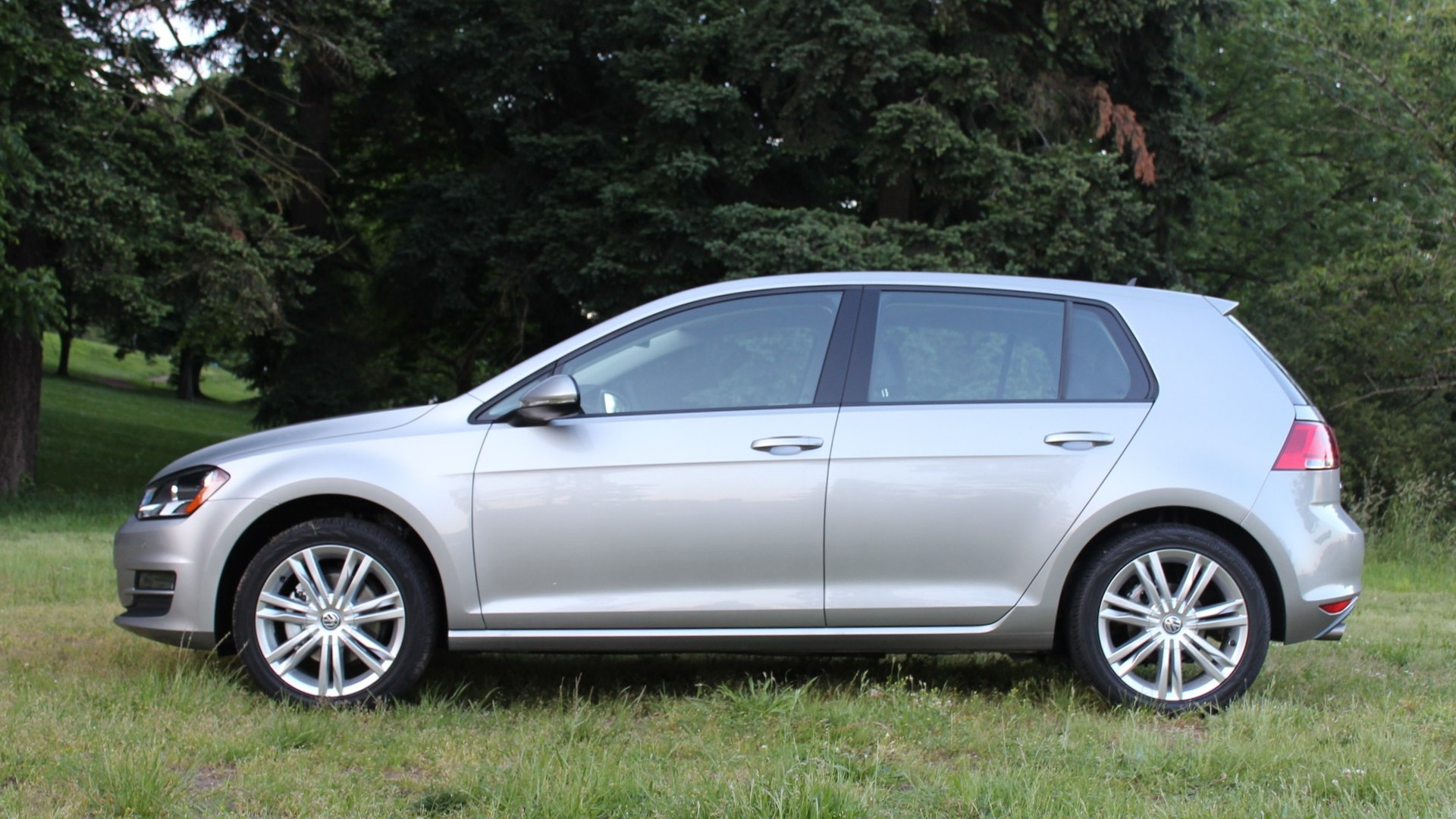 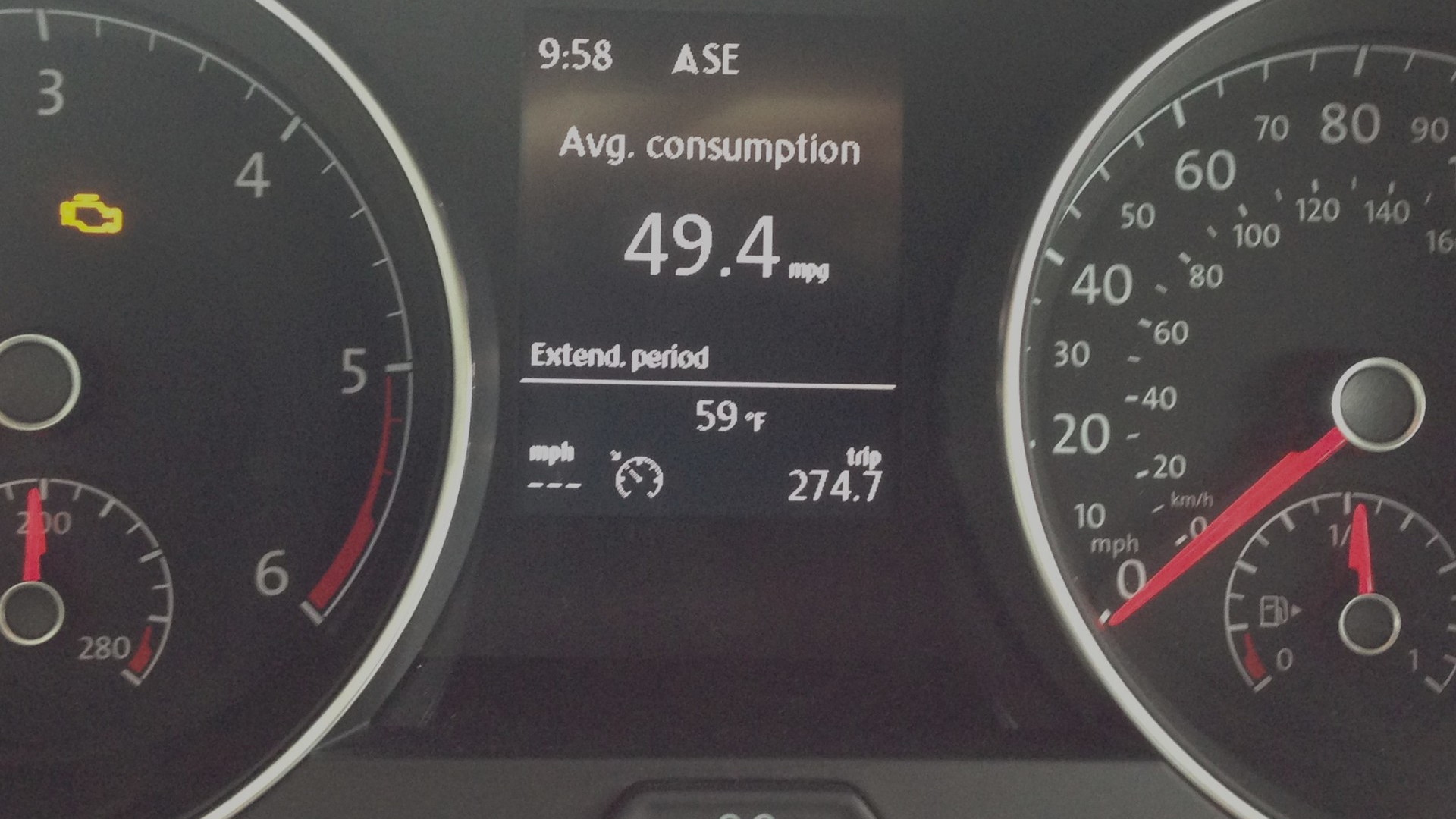 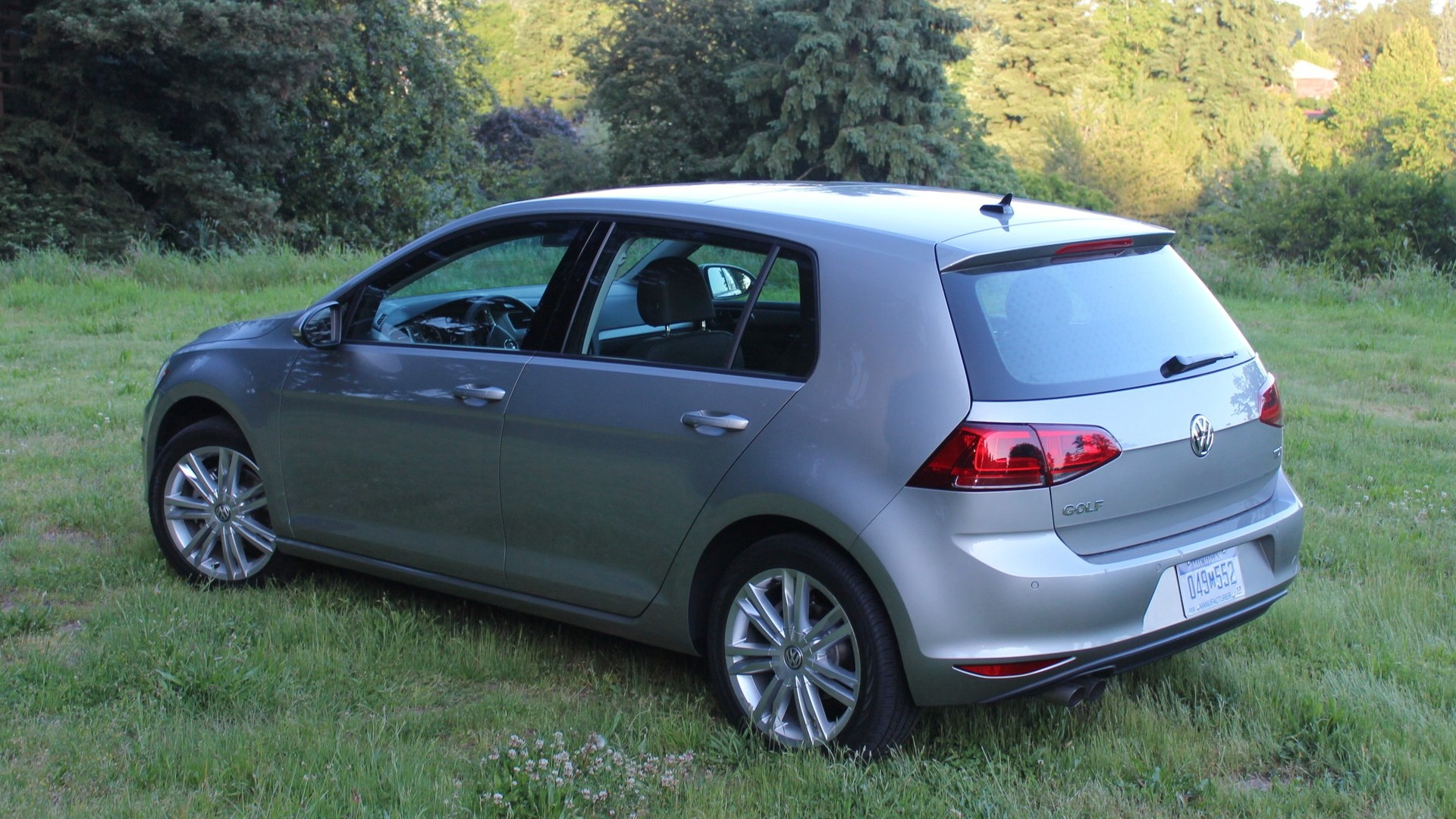 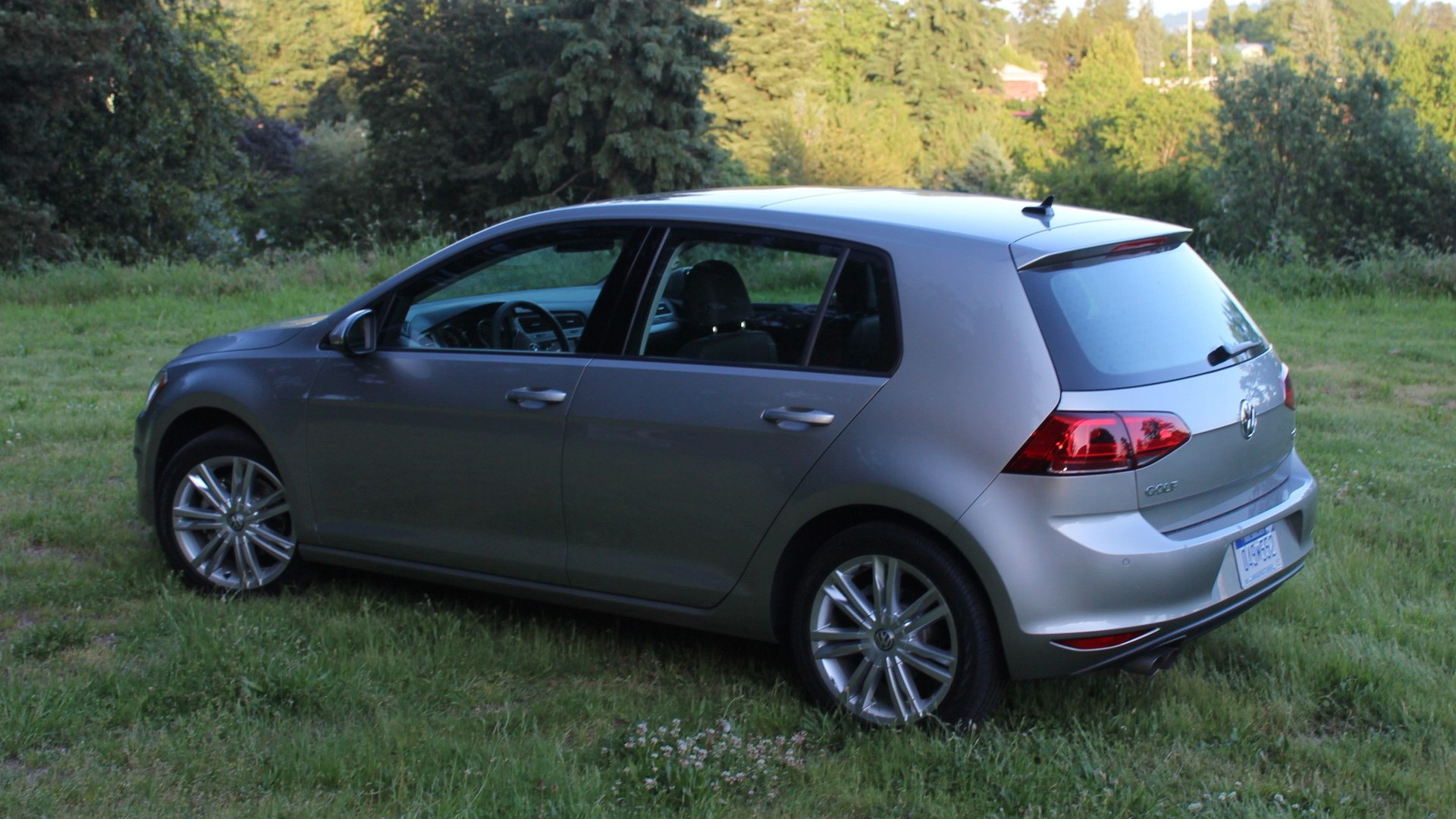 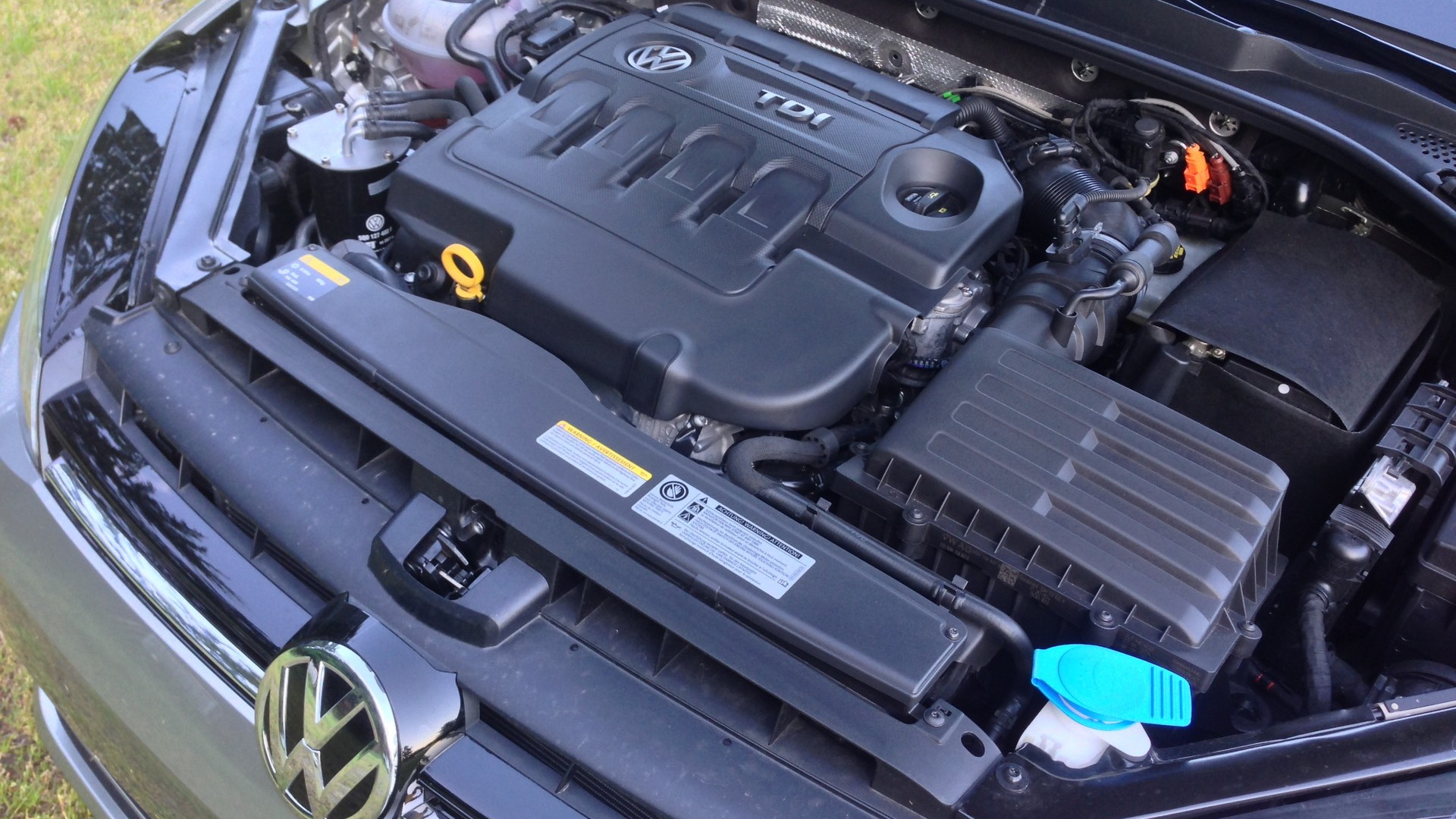 Enter the 2015 Volkswagen Golf TDI, a vehicle that seems to buck those generalizations completely, with the commendable 49 mpg we averaged in a week and 275 miles of driving. And this was all achieved in comfort, from a car that feels zippy and responsive.

Every other car we can think of that returns mileage even approaching that range seems to involve some glaring sacrifice—in performance, comfort, or refinement, for example. But in our week with the new Golf TDI, we intentionally drove it with flow of traffic, and used it as we normally would as a daily driving or commuting car—not as complete leadfoot drivers, but by no means hypermiling or being exceptionally mileage-minded.

Even in the possibility that the trip computer was a little optimistic, our test number is significantly better than the 2015 Golf TDI's 31 mpg city, 42 highway rating with the six-speed manual transmission, as we tested it. And it's a few mpg better than what we saw with the last-generation Mk6 Golf.

This is the new, seventh-generation (A7) Golf, and under the hood there's also a new version of VW's well-established 2.0-liter in-line turbocharged diesel four. According to VW there are no parts carried over to the new EA288—only the cylinder bore spacing. This engine is now up to 150 horsepower (10 more than the previous version), with peak torque at 236 pound-feet. Internal friction has been reduced a significant 15 percent; it moves to a SOHC design; and there's now variable cam phasing for both the intake and exhaust valves. Emissions have been reduced by about 40 percent versus the previous engine, with the help of exhaust after-treatment.

An even smoother, more rev-happy TDI

In character, it's a step smoother and quicker-revving than the previous/outgoing engine, especially once it's fully warmed up. We revved it up near 5,000 rpm once or twice to see what it's like, and it's still surprisingly smooth. But there's really no need; this is an engine that is best kept between its 1,750-rpm torque peak and its 3,500-rpm power peak when accelerating. We generally upshifted before revs reached 3,000 rpm and followed the shift guide that's built into the instrument cluster, advising you which gear you should be in for best fuel economy. When cruising, as that system points out, it's happy lugging even at 1,100 or 1,200 rpm.

We didn't hesitate to tap into the Golf TDI's tremendous torque, which allows you to pull easily up to speed at rates that would require extra downshifting in most gasoline models. The majority of our driving loop took us mostly on a series of two-lane roads over a low range of mountains—we did have have the A/C on about half the time—our cruising speeds were mostly between 55 and 65 mph, although we did go a bit higher at one point, and our week included several cold starts and a couple of shorter trips.

The new 2015 Golf is the first U.S.-market model (other than the GTI) to arrive built on the new 'MQB' modular global platform that uses more high-strength steels and new construction methods allowing a slight weight reduction versus the previous generation while increasing body rigidity. Curb weight for the test Golf TDI is around 3,125 pounds.

Not entirely sporty, but very nimble

Nimble yet low-effort is how we'd describe the driving experience. The suspension doesn't feel especially sporty or performance-tuned (and oddly in the TDI you get a torsion-beam rear suspension while other Golfs have an independent setup); but we really like the way the Golf combines a relatively firm, controlled ride and great isolation of road noise with good body control and precise steering. The electric power steering in particular is one of the nicest systems in its class, feeling settled and confident on center but loading up nicely off-center.

The interior of the Golf feels airy, with the corners of the dash pushed outward and forward and the dash also pushed forward a bit. Overall, the driving position doesn't feel as 'sunken in' as in other previous Golfs—not a bad thing, as visibility seems to have improved for it. As always, seats are far better than most other models in this price-conscious compact class—very supportive. Although we'd probably want cloth over the somewhat rubbery leatherette upholstery.

Legroom is definitely more limited in the back seat of the Golf than in some rival compact-class models, but the front seats do go back farther than in many of those cars and so if you're taller you'll tend to take advantage of that. But getting in and out is easy, thanks to a roofline that actually doesn't cut downward near the back (refreshingly, today), and the cargo area is a boxy 16.5 cubic feet with everything up in place or 52.7 cubic feet with the seatbacks flipped forward.

Our test car was a 2015 Volkswagen Golf TDI SE, equipped with the included power sunroof, heated washer nozzles, heated front seats, rain-sensing wipers, automatic headlamps, front fog lamps, rearview camera system, and Fender Premium Audio. It also had the Lighting Package, with Bi-Xenon headlamps, LED running lamps, adaptive front lighting, and interior ambient lighting with LED reading lamps, as well as the Driver Assistance Package, which includes front and rear Park Distance Control plus Forward Collision Warning. The latter system, by the way, beeped at us a few times through the week, whenever we were about to change lanes around a slower-moving vehicle; it's simply not attention-getting enough, as it sounds an awful lot like any other dashboard warning when it goes off.

Volkswagen is pricing its diesels more attractively than ever, and the 2015 Volkswagen Golf TDI starts at just $22,815 (really just $3,000 over a comparable 1.8T gasoline model). The bottom-line sticker price of our car as tested was just $28,005.

One interesting side note: There's no stop-start in the Golf; that's a feature that Mercedes-Benz, BMW, and Audi have brought over in their diesels, and it can yield some significant savings in suburban driving. One such system that worked very well, we found, in a recent drive of the Mercedes-Benz E250 BlueTec diesel, over which we averaged 41 mpg in mostly highway driving.

The new Golf is also one of the quietest, most refined small cars in its class, which includes everything from the Ford Focus and Mazda 3 to the Hyundai Elantra Touring and Kia Forte5; it might even be better than the last-generation Audi A3 or VW Jetta Sportwagen (the new/upcoming 2015 SportWagen is part of the Golf lineup, so that's not at all a bad thing).

Diesels definitely aren't the right choice for everyone. Those who make mostly short trips are probably going to be better off with a hybrid, or a plug-in or all-electric. But if you have a long commute, diesels can save fuel and money—over hybrids—while allowing you to cruise effortlessly and go with the flow of traffic.

Again, leave it to Volkswagen to make its diesels no-brainer picks for anyone who needs to drive longer distances. While the Golf TDI pretty much has the market on miles per gallon without any hybrid hardware, for now it also has the market on the most fun above 40 mpg.