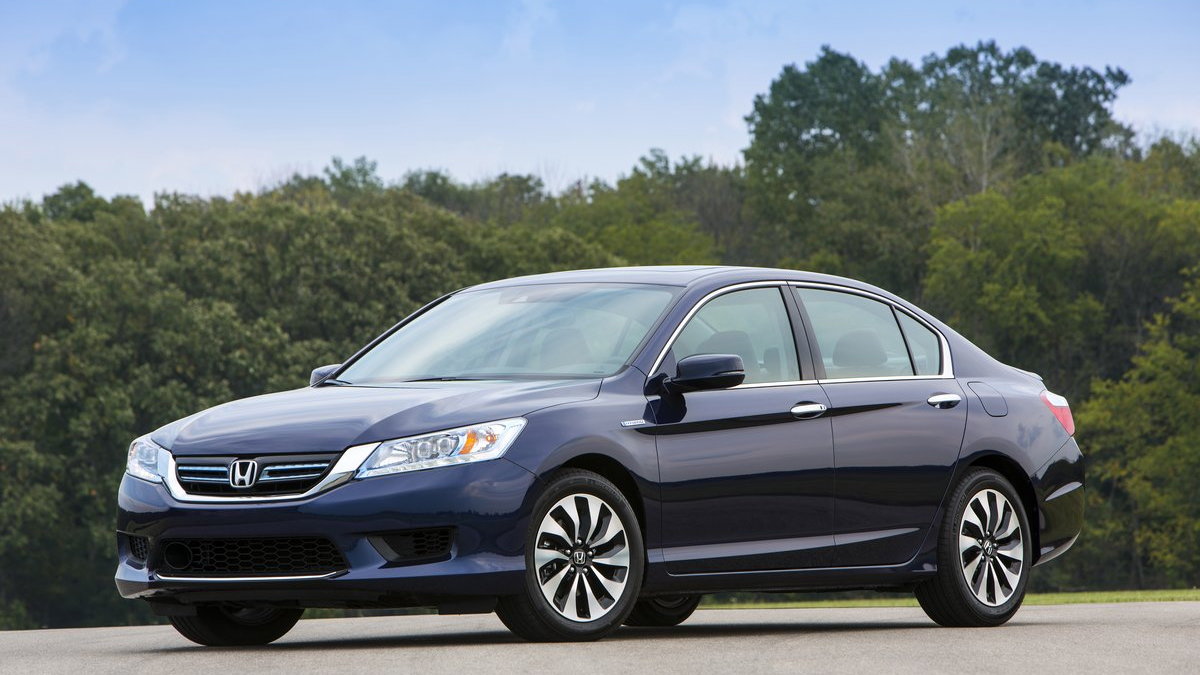 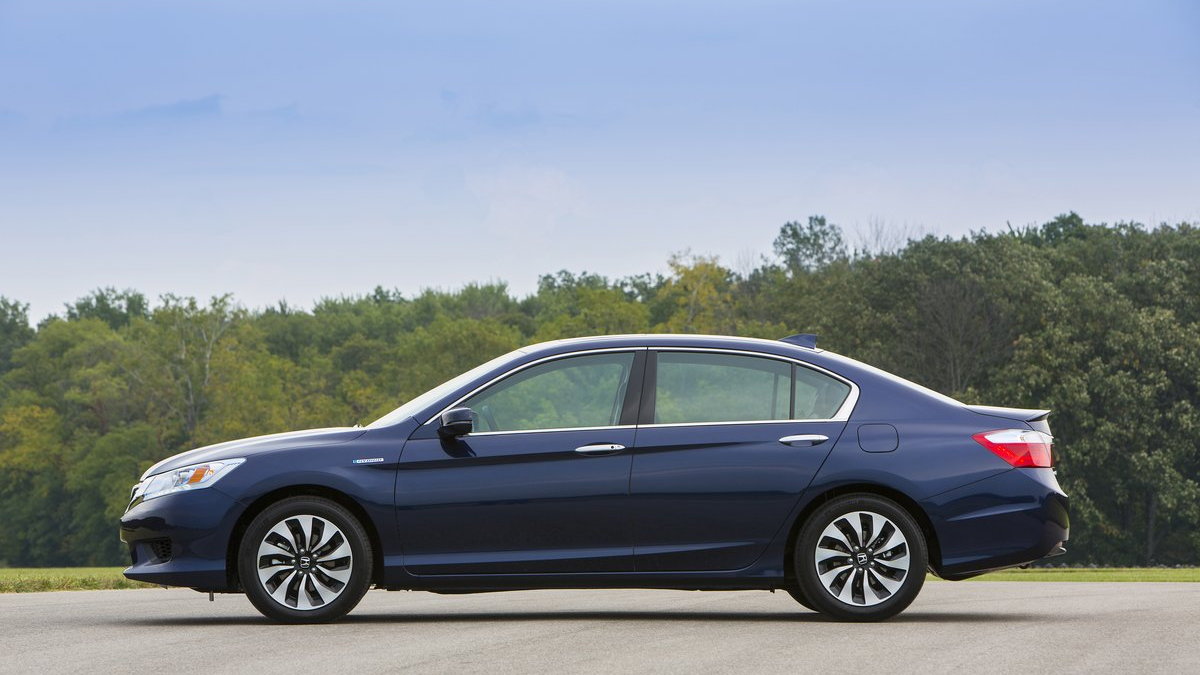 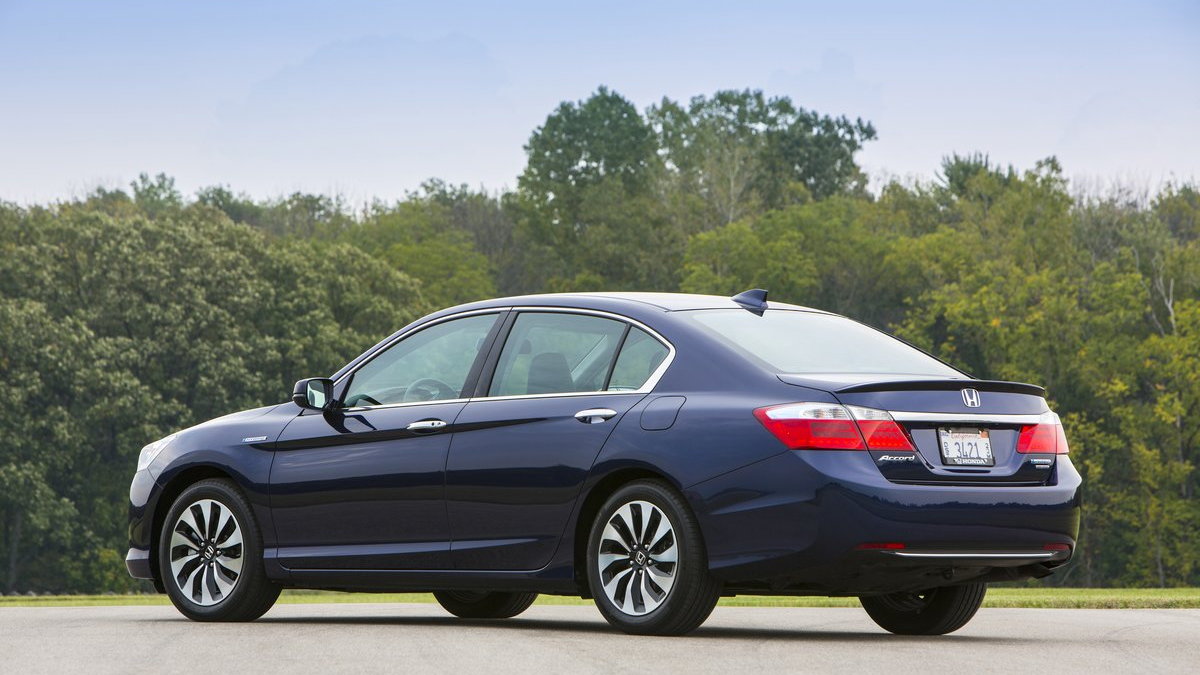 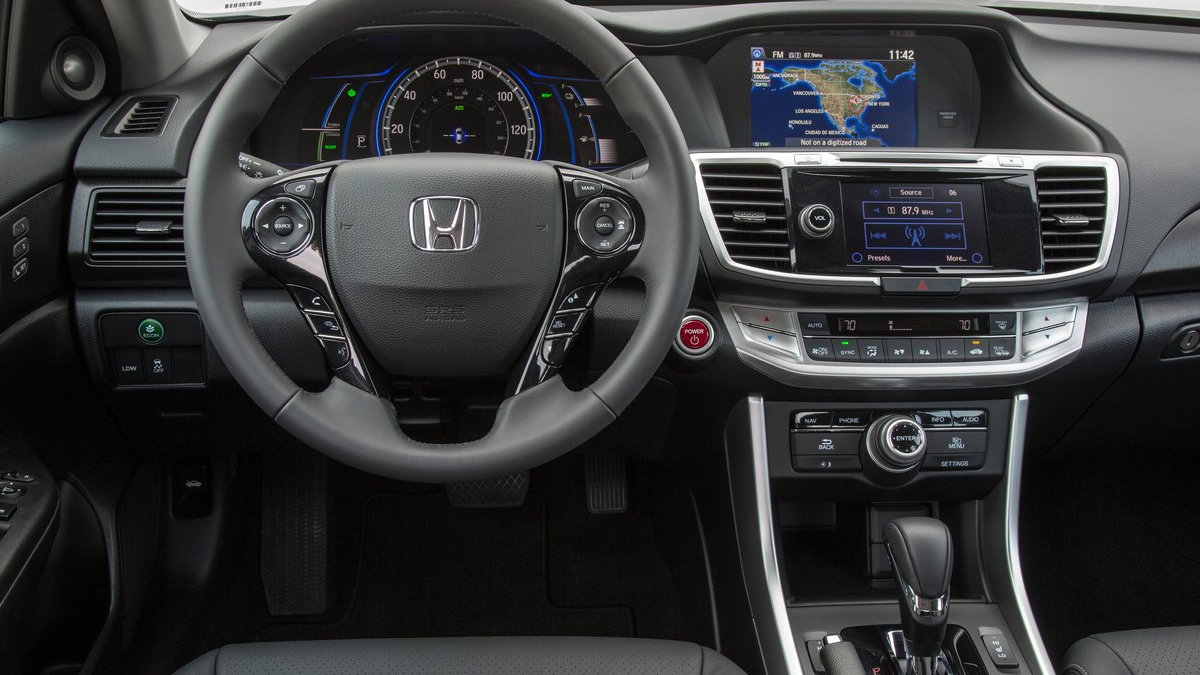 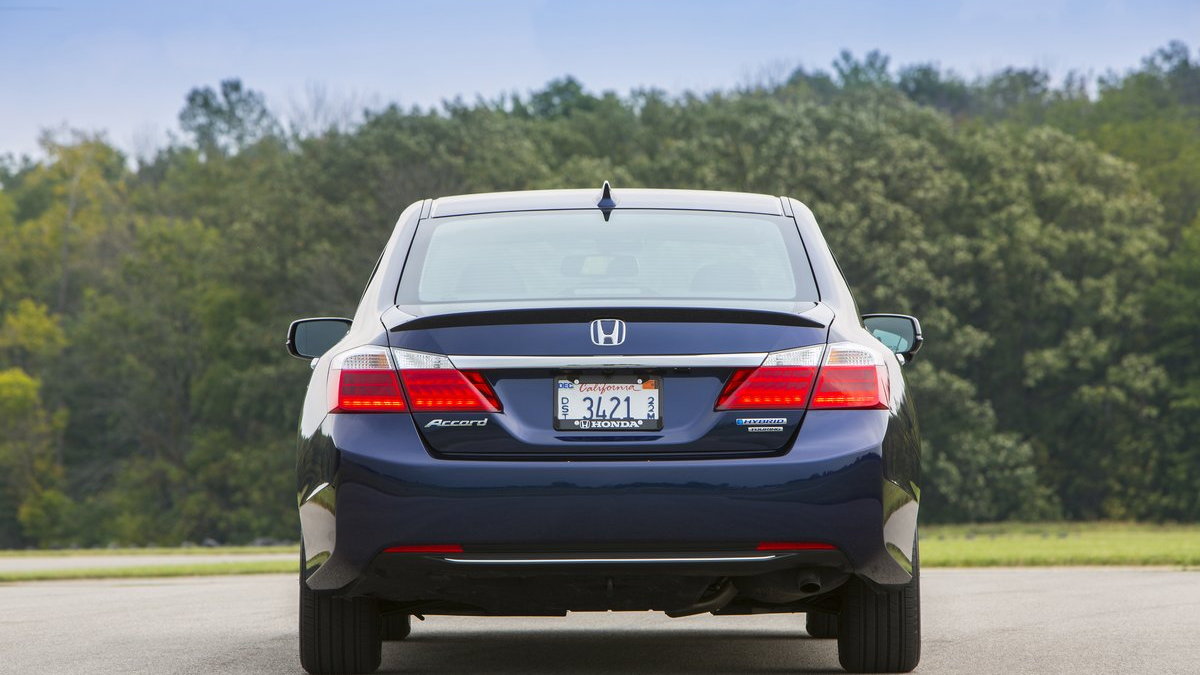 51
photos
Does the all-new 2014 Honda Accord Hybrid really get 50 miles per gallon? And does it drive as well as a regular four-cylinder Honda Accord?

To cut right to the spoiler: yes and yes.

For some shoppers who already know and like the Accord, that might honestly be enough—once they run the numbers and see that this is a car for which hybrid ownership will make fiscal sense. Fortunately, we have many more meaningful impressions and numbers to share, as we just returned from spending most of a day with final, production-spec variants of the 2014 Honda Accord Hybrid, which will be Ohio-built for the U.S. and begins reaching dealerships late this month.

If you haven't read our explanation of how the 2014 Accord Hybrid powertrain works without any conventional transmission, you'll want to. In short, the Accord skips it all—even the torque converter and drive clutch—and moves with a system of two nested motors, of which one is mainly a generator and the other is for propulsion. The generator is always connected to the gasoline engine, while that engine only sends power directly to the wheels at steady highway/cruising speeds, when a clutch pack connects it.

The rest of the time, the propulsion motor delivers power to the wheels either from the generator (run by the gasoline engine), the 1.3-kWh battery, or a combination of both. And energy, of course, is recovered when coasting or braking.

What seems puzzling at first is in truth a remarkably elegant solution. And friction reduction is the real benefit; by eschewing conventional transmissions and relying on direct/gear drives, the setup cuts friction by about 70 percent, overall.

So how does such a system drive? The best way to describe it is responsive and linear, like an electric car—sometimes quiet, sometimes with a completely out-of-sync gasoline-engine soundtrack.

Two of typical driving scenarios feel particularly odd at first. One of them is in moderate acceleration. You take off from a stop, and the Accord Hybrid steps off quietly with its electric motors only. Then as speed gathers, you hear (but don’t feel, thankfully) the gasoline engine start up and rev, to deliver (combined with the battery) enough power to the propulsion motor.

From the driver’s-seat, there’s not always a direct momentary connection between those revs and the level of acceleration. Although full-throttle acceleration can bring out a sort of 'motorboating' sound as with a CVT, it's different in most other cases. If you’ve driven the Chevrolet Volt after its charge has been exhausted, it’s closer to that; give the accelerator a push and the vehicle moves forward responsively, with the gasoline engine revving up a moment later; lift off the gas and it’s left revving for a second or two, charging the battery and giving you a buffer to 'get back on the gas.'

The other strange sensation happens when you're cruising at steady speed (of say 60 mph) and you floor the accelerator to pass. You momentarily feel the motor system give the tall-geared gasoline engine a respectable wallop of supplemental torque, but as you keep your foot pegged, a fraction of a second later the gasoline engine decouples from the drive wheels and races to its upper ranges, sounding like a very quick-reacting CVT, all as a much stronger kick of acceleration is felt—as delivered, again counterintuitively, by the electric motor that's connected directly to the wheels.

The figure that matters the vast majority of the time is that the electric motor system can deliver up to 226 pound-feet and 166 horsepower. Having acceleration (almost) always handled by the electric propulsion motor altogether makes it feel very linear and predictable—especially if you can ignore the sounds from the gasoline engine.

That 141-hp, 2.0-liter four-cylinder i-VTEC gasoline engine, by the way, is noteworthy not just for being Honda's first Atkinson-cycle engine but for being the most efficient internal combustion engine in the world.

Anyone who’s spent a lot of time driving a hybrid vehicle knows that there’s a familiarity curve. After you get to know the system and the displays, and anticipate behavior like when the gasoline engine might turn on, and how much all-electric operation you have, you may start to ‘game’ the system, and modify your driving.

The problem is, traffic doesn’t necessary follow those patterns—and the sluggish starts and pulsing-and-glide business you might need to do for the highest numbers might be enough for road rage. Or, perhaps, driving as gently as your hybrid demands is actually adding to your own anxiety level.

And to that, we can report that we saw great mileage in the Accord Hybrid—and met the EPA Combined estimate, coincidentally—by merely driving normally, with traffic (and actually with some rapid starts and exuberant driving at a few points). Averaging results from me and another drivers over about 130 combined miles, we saw 47 mpg.

To conduct a couple of experiments, we then took the Accord Hybrid on two back-to-back runs of the same vehicle on the same 13.3-mile suburban loop, with lots of traffic lights and cruising speeds of 30 to 55 mph. Turning off the A/C and driving very gently—no less than five under the limit, and never blocking traffic—we saw more than 72 mpg (returning with the battery at about the same level). With the same car, we headed out with the A/C set cold, taking off full throttle as many times as we could (the electric motor system has tire-scorching torque off the line), driving much faster, and not braking in a smart way, we returned with an average of nearly 37 mpg.

From that (provided our trip computer was accurate), we're quite convinced that very few, if any, drivers are going to see running averages below 40 mpg. We're of course eager to see how well we do in a follow-up drive, on familiar drive loops.

As pleasant-driving as other Accords, for the most part

If you can manage to set the powertrain and mileage thoughts aside for the moment, the Accord Hybrid steers, rides, brakes, and functions—most of the time—much like any Accord. And Honda has introduced some special measures to make sure that they're smooth.

Hybrid models get a new all-aluminum subframe, along with a liquid-sealed subframe mount that helps quell vibration, while the suspension components have been bolstered in back for the addition of the battery pack (about 155 pounds together with the power control module). Active noise control provides yet another measure of quietness inside the cabin.

All Accord Hybrid models get dual-path, amplitude-reactive dampers that help damp any harshness introduced by the hybrid system’s additional weight—and altogether, the Hybrid drives better because of it. The steering doesn't feel quite as crisp at turn-in as in the other Accord models—possibly a result of those different dampers, or the somewhat less sticky run-flat tires. But overall, its handling is surprisingly engaging—far more so than the Toyota Camry Hybrid, for instance.

The Accord Hybrid’s braking system is a special electric-servo regenerative system that follows technology developed originally for the Fit EV. And it’s excellent here. Among hybrids, we think it’s the best-coordinated yet, with absolutely none of the grabbiness you have in some hybrid systems when you press lightly at lower speeds or the unpredictable lurching you get from some other systems in the last several feet of a stop.

The back seat of Hybrid models is just as roomy as that of other Accords, but rear seatbacks don't fold forward and trunk space is cut to 12.7 cubic feet—still enough, we'd think, for a large grocery run.

Compared to what's offered in Toyota vehicles, as well as to Ford's interactive customizable displays, we found the displays and guides in the Honda Accord Hybrid to be refreshingly simple—with gauges for battery level and fuel level off to the right and a charge/boost gauge to the left. The center, reconfigurable area can display a number of trip-computer readouts, show a dynamic power-flow schematic, or even display navigation prompts (if so equipped). For those competitive types, there's also an Eco Guide and Eco Score system, with arcs that advise you momentarily on driving style.

The shift knob is conventional—nothing bewildering or exotic—but there’s an EV Mode button just aft of it on the center console, and if you press it when you’re driving within light-load conditions the Accord Hybrid will run with the gasoline engine off until you either run the battery to a low point or press the accelerator to a certain point for more power. Once you have, you’ll need to back off and again press that button.

There is an Econ Mode button over to the left side of the instrument panel; just as in most other new Hondas it softens powertrain response, as well as runs the air conditioning and climate control at a more conservative setting.

The EPA ratings for the 2014 Accord Hybrid are impressive: 50 mpg city, 45 highway (and 47 mpg Combined)—the highest EPA rating of any five-passenger, four-door hybrid sedan.

Visually, there are only a few minor cues to differentiate the hybrid. Blue accents have been added to the grille and a few other areas around the exterior; there's a special rear spoiler and diffuser; and Honda is introducing a special 'aero' wheel design. The Hybrid also gets its own exclusive gauge cluster, and the steering-wheel is finished in a gloss-black finish.

Really what it comes down to is whether or not you can love this very responsive, pleasant-driving car that happens to have an off-kilter soundtrack.

Honda has started from scratch and created a new hybrid system that might just to get better real-world mileage than all the rest. Added to the goodness of the Accord, we think that's a winner.