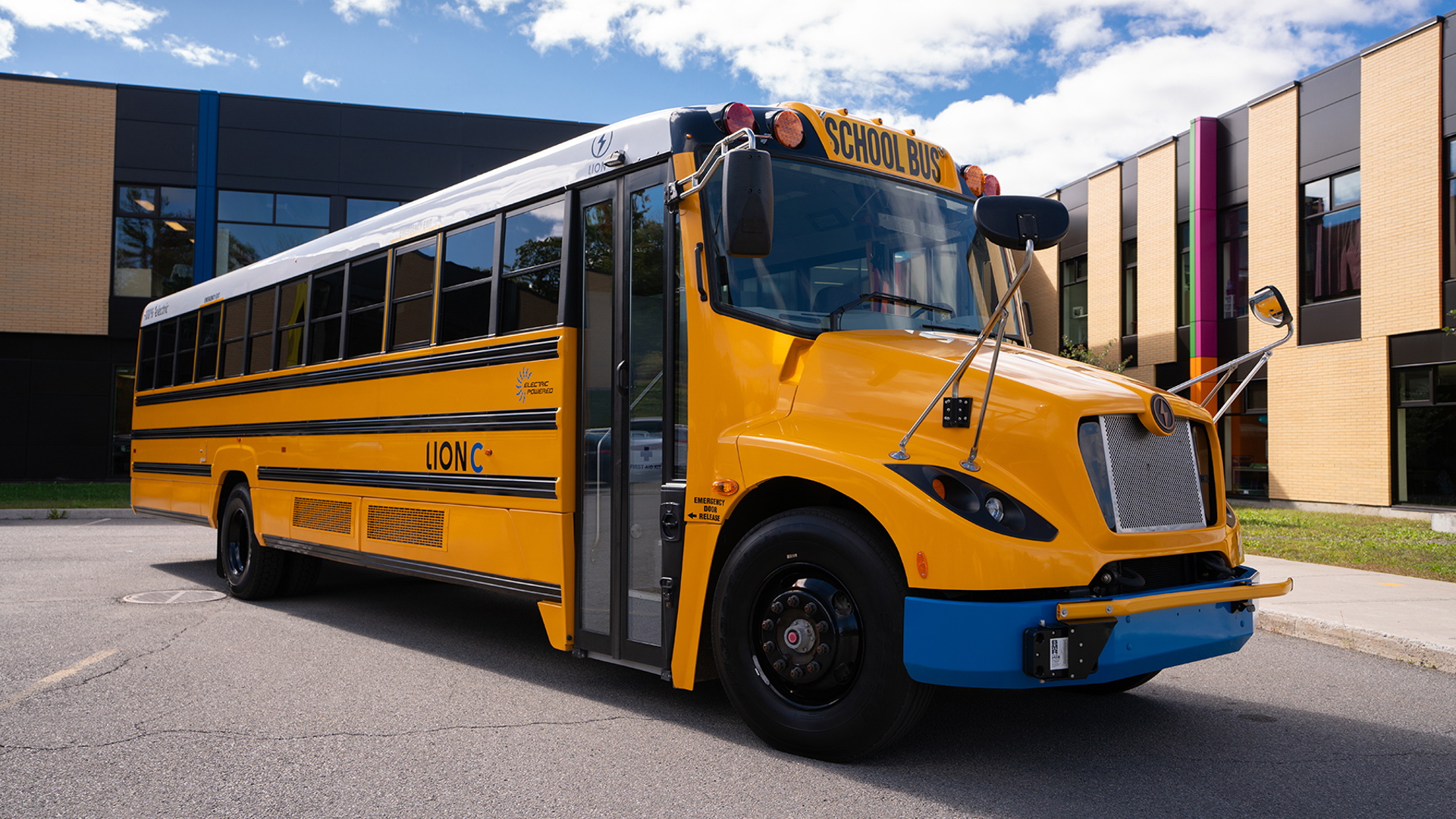 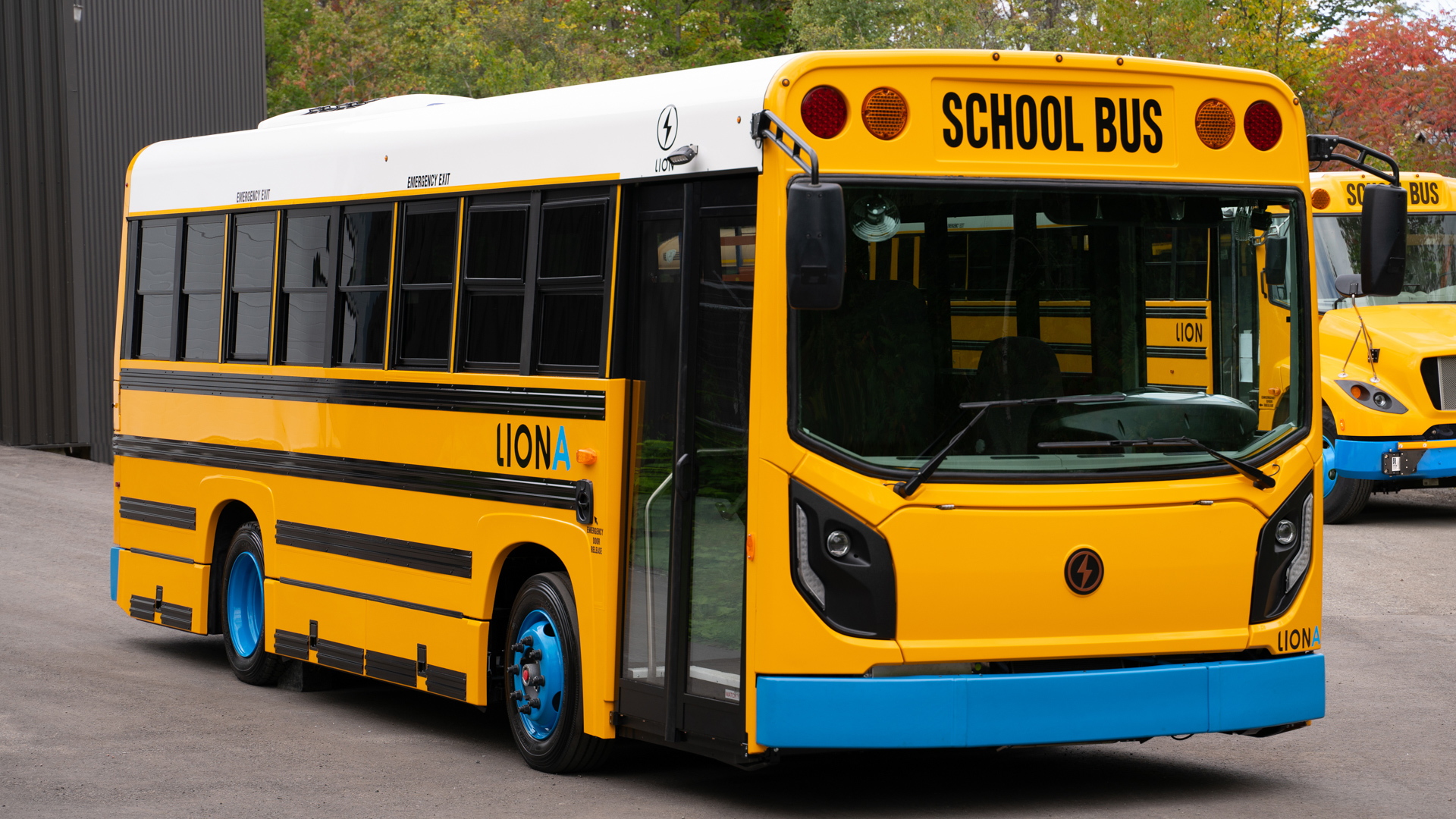 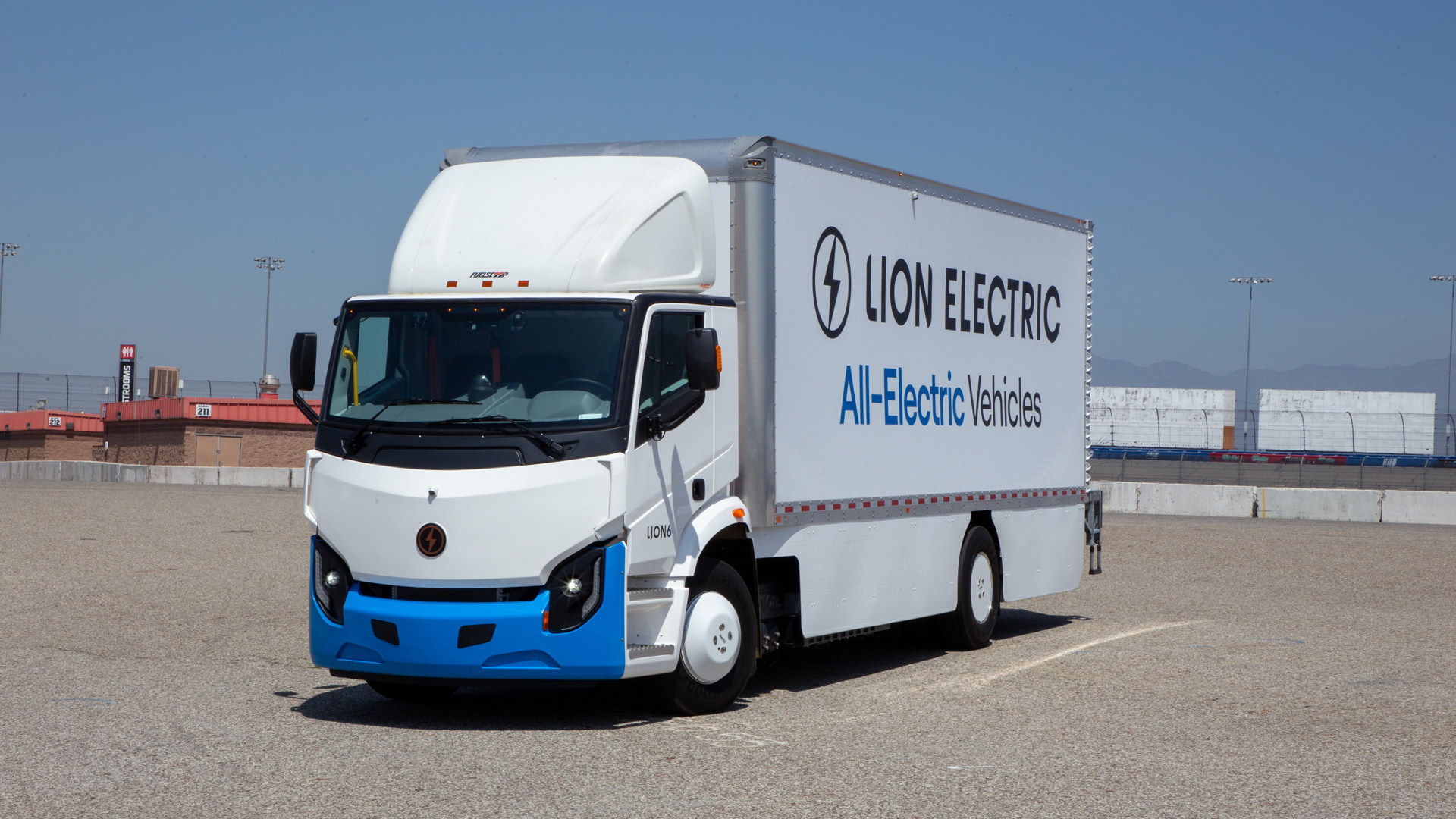 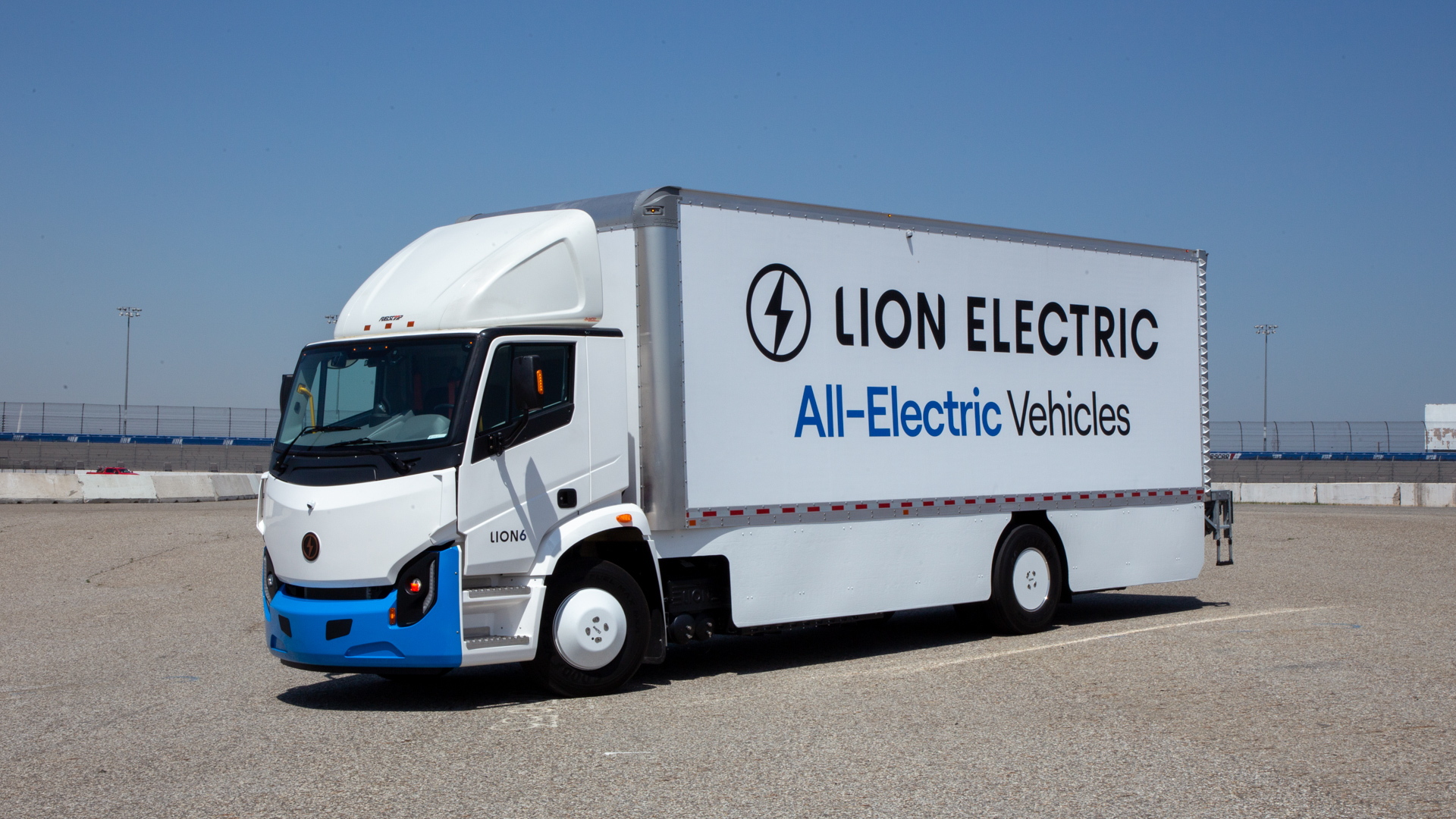 Like most American school children, I have enduring memories of traveling in big yellow school buses and inhaling big diesel fumes.

Companies like Lion Electric are looking to change the diesel school bus experience by offering a trio of electric school buses that will transform and make greener (not yellower) the school commute for students across the country.

Electric school buses are ideal for large commercial adoption, they are the largest form of public transportation, with 480,000 in service on school days. They generally don’t drive very long routes; they stop and start frequently; and they have wide predictable periods of down time.

This would allow a school to use one even without the installation of higher voltage fast chargers on site. Level 2 charging would be enough to get the buses charged up overnight or even as they idle during the school day and it’s much cheaper/easier to install than a DC quick charging station.

The EPA has also targeted school buses as a way to reduce pollution widely, and the agency recently announced details to its $5 billion electric school bus program, including an initial installment of $500 million as a part of the latest infrastructure bill. The program includes a lottery to receive funding and prioritizes applications to replace internal-combustion buses in high-need, rural, and Tribal areas. And the rebate program doesn’t only apply to the vehicles, it applies to the installation of needed charging hardware as well.

To get a sense of what these electric school buses will be like, I traveled to the Auto Club Speedway in Fontana, Calif., to get some time behind the wheel of the Lion 6 commercial truck that shares a Class 7 chassis with the Lion C school bus. Lion makes another large school bus, the Lion A, but that has a monocoque chassis of its own. The buses weren’t available for us to test at this event and there’s a big difference in the heights of the vehicles, but from a driving standpoint the two should be pretty similar with the same power output and the same battery packs underneath.

We unfortunately didn’t get to take the truck on the NASCAR-ready oval track, but the infield course had been repurposed for test drives of the Lion 6 and several other commercially available electric trucks.

Lion offers several battery and range configurations for the Lion 6 and the school bus as well. The version I tested came with the largest battery setup. Three battery packs were mounted around the frame (two in the middle, one in the rear) for a total of 252 kwh and 200 miles of estimated range. On the school buses, range will drop down to an estimated 155 miles. The packs are composed of a pair of 42.2-kwh BMW i3 battery packs stacked top of one another, so they can be cooled concurrently. Power figures check in at 335 hp and 1,800 lb-ft of torque, at maximum.

The first thing you notice when driving these large vehicles with electric drivetrains is how easy it all seems. Hop into the seat, push a button to put the vehicle into drive, release the airbrake, and roll away. Thanks to all of that instant torque from the electric motors, acceleration is surprisingly linear and it makes these vehicles feel smaller than they actually are (I felt the same sensation testing Thomas’ Jouley electric bus last year). If not for the oversized steering wheel, it would feel much like driving a big SUV or an HD truck.

As good as a diesel engine might be at low-rpm torque generation, it isn’t in the same class as an electric motor that requires no spinning up. Driving a truck without the diesel hum takes some getting used to. It’s eerily quiet in the Lion 6’s cabin minus the sounds of the air suspension bounding on the track’s uneven surface.

The Lion 6 doesn’t offer different regen levels. It keeps it simple with what I’d describe as a medium amount of regen that’s very noticeable if you lift off suddenly but still requires the brakes to slow the truck to a complete stop. Lion representatives said this was to give truck and bus operators less complexity as they adapt to electric vehicles, and to prevent drivers from turning off the regen for initial ease-of-use that would undermine some of the efficiency that these vehicles are trying to deliver.

Lion lists charging times as 11 hours on a Level 2 charger, which drops down to around four hours on a 50-kw DC-fast charger. That’s plenty of time to get a school bus charged up overnight. Lion also says another advantage of an electric school bus is that it can be cooled or heated while plugged in and idle, in preparation for a route. On a diesel bus, the engine would need to be running for that to take place and that contributes to the amount of emissions a school bus produces over its lifetime.

Lion Electric’s three school buses make up a large percentage of the company’s future sales. Of the 2,422 vehicles in its current order book, nearly 90% of that (2,136 vehicles) are electric school buses. And the company has detailed plans to open up a large plant to build electric buses and HD commercial trucks in Joliet, Illinois, by the end of the year. The plant will have a capacity of 20,000 vehicles, and Lion says it will scale up production to match orders and demand. The company’s current plant in Canada only has the capacity to produce 2,500 vehicles, so this is a gigantic upgrade in its ability to produce these vehicles.

In addition to the Illinois plant, Lion also plans to open up a battery factory of its own in Quebec later this year and batteries from that facility will begin to show up in Lion vehicles by the end of the year. That factory will have an eventual 5 gigawatt-hours of production capacity annually, or enough batteries for 14,000 commercial vehicles per year. It also gives the company better control over the form factor and size of its batteries to better integrate them into the various chassis that Lion offers.

It’s encouraging to see government investment and private sector production ramp up in lockstep to address environmental and emissions concerns. School kids will still get to make their own yellow school bus memories, but this time they won’t be so stinky.

Editor's note: This piece was updated to reflect the Lion A being on a separate chassis from the Lion 6 and Lion C school bus.