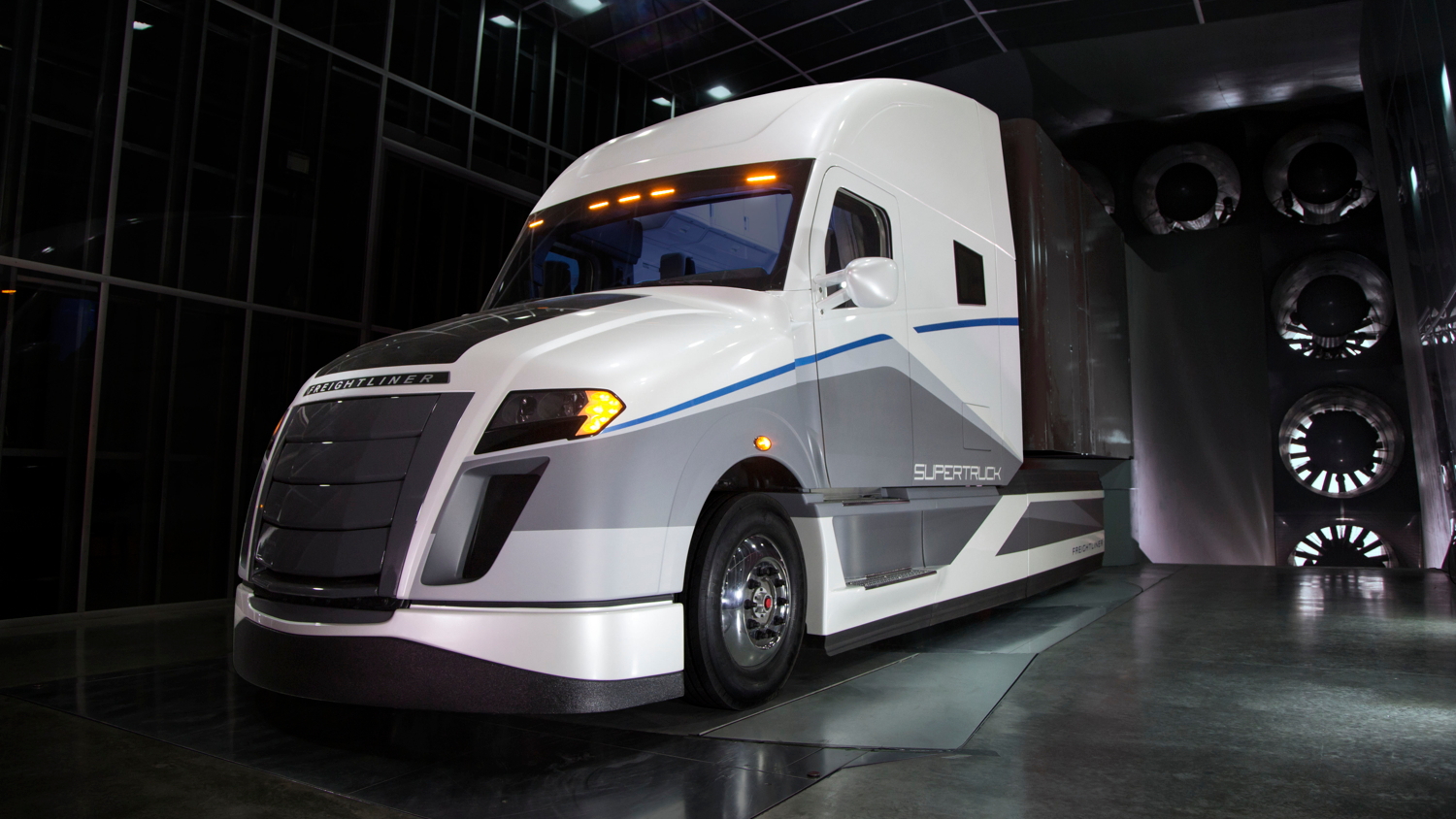 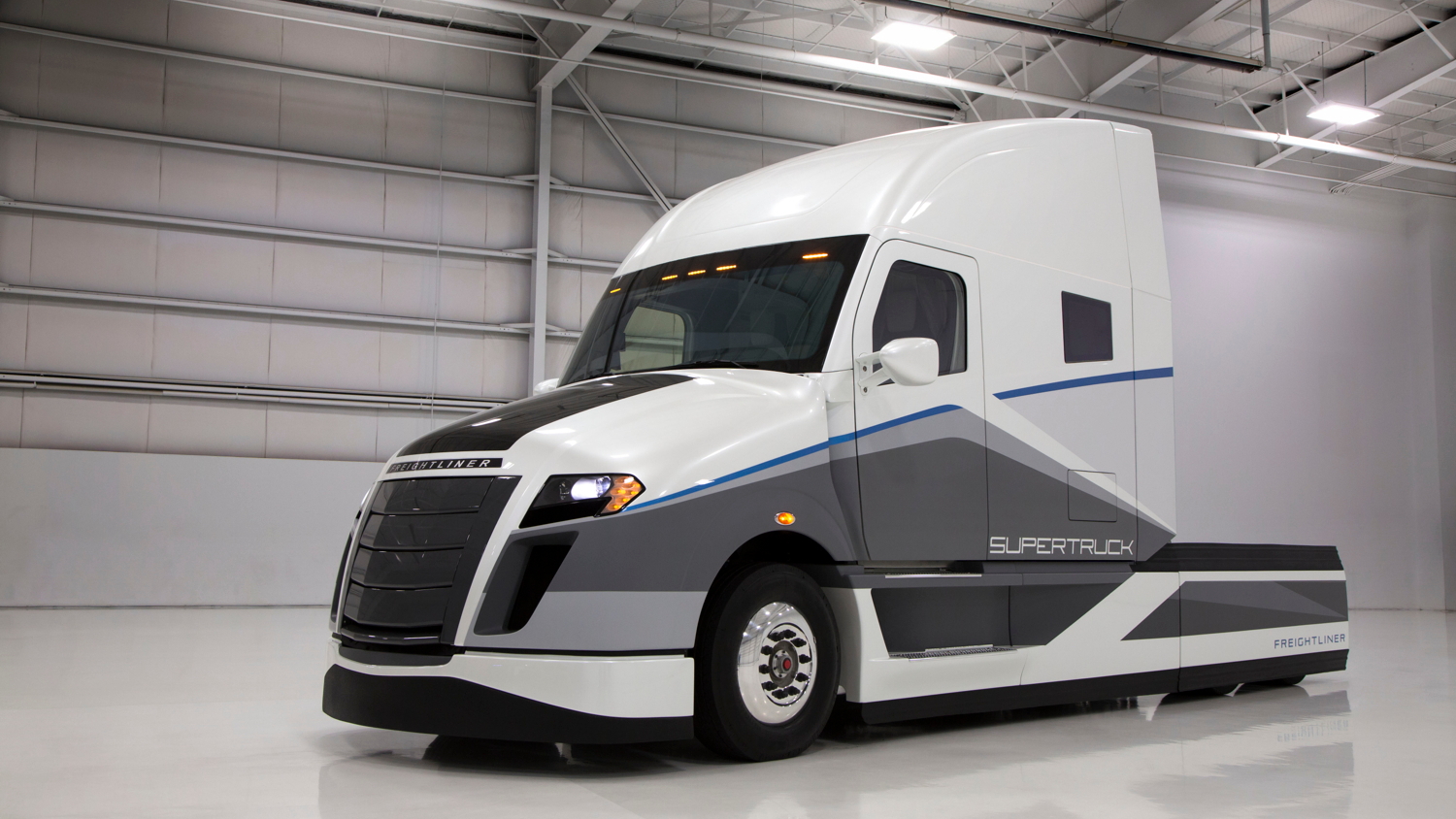 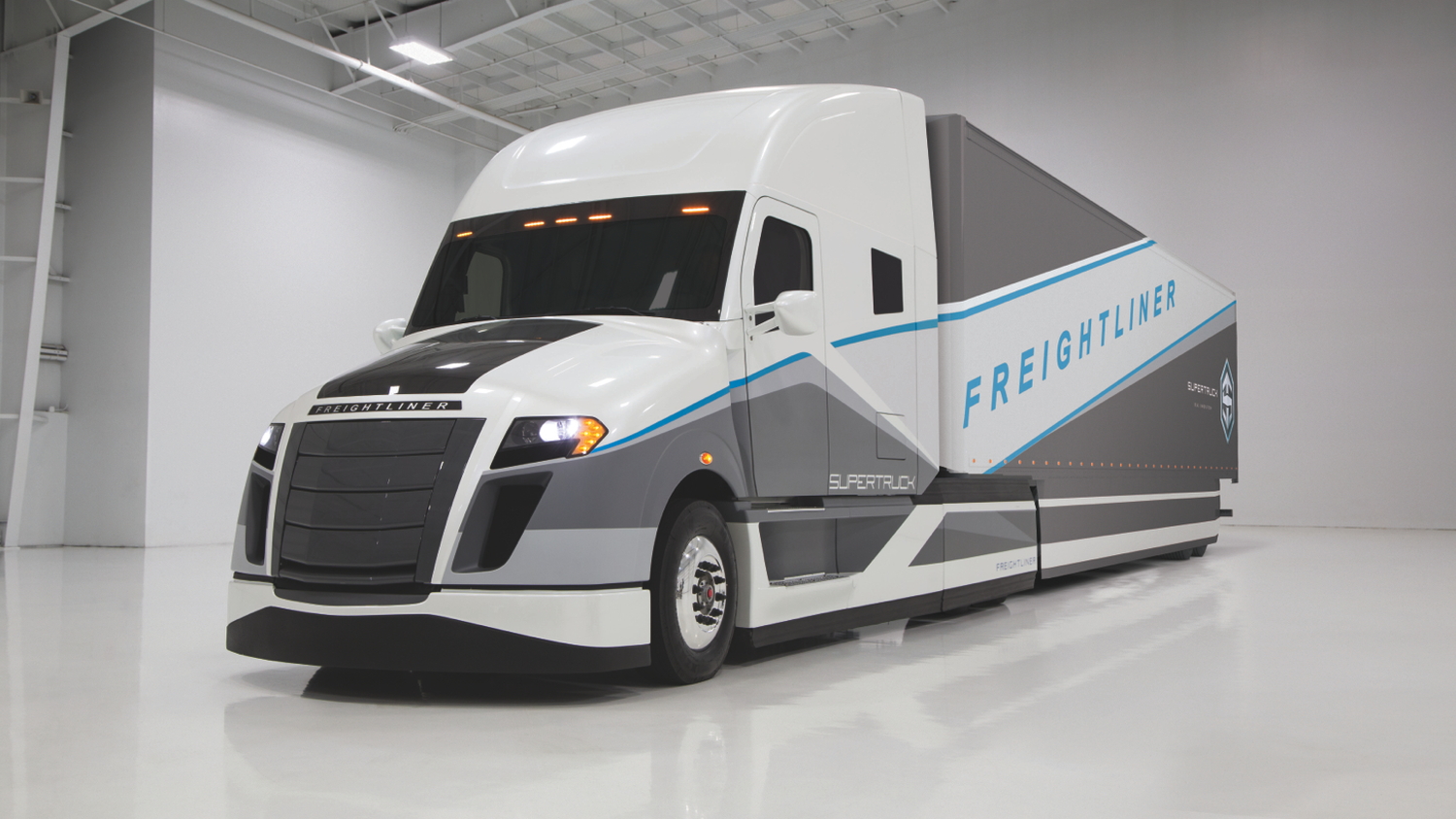 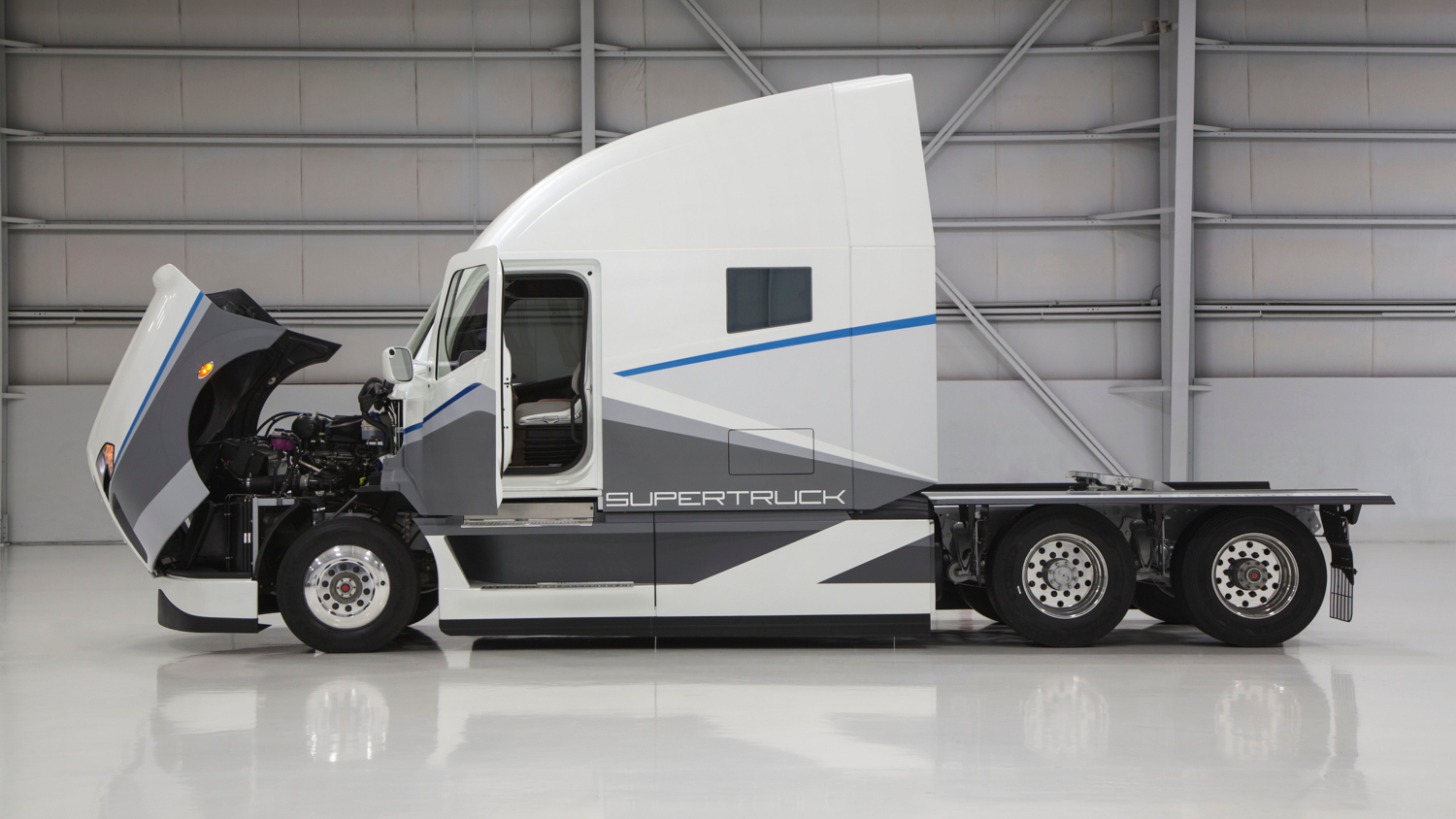 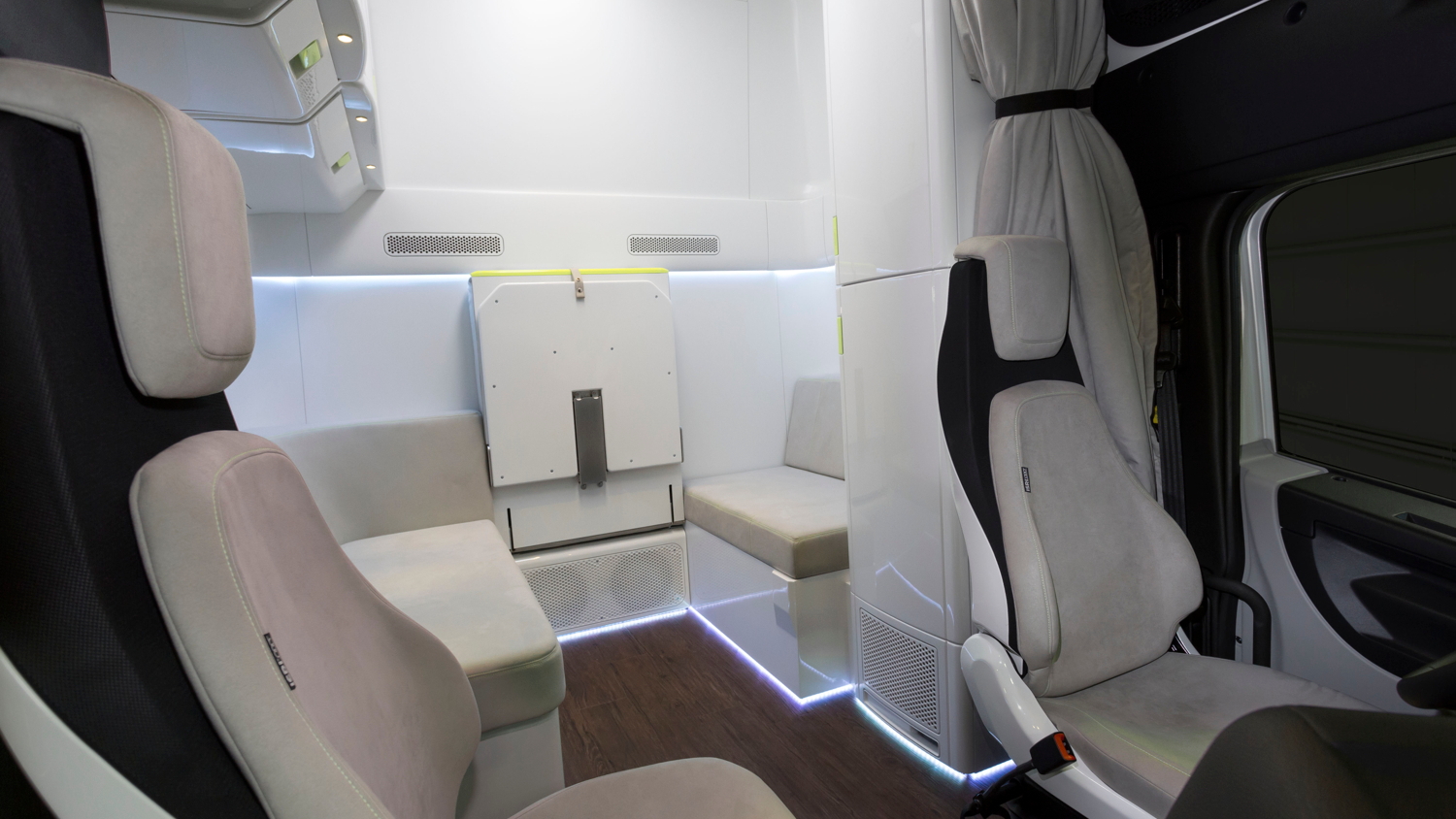 Heavy-duty trucks make up a fairly small percentage of the traffic on U.S. roads, but they cover many more miles each year than the average passenger car--with much worse fuel economy.

Even small efficiency improvements for the biggest trucks can have a major impact on overall emissions, and perhaps lower the cost of the goods they transport as well.

In that context, the Daimler Trucks North America "SuperTruck" is definitely worthy of its name.

ALSO SEE: How To Make A Semi Much More Efficient: Cummins 'SuperTruck' (Mar 2013)

Debuting this week at the 2015 Mid-America Trucking Show in Louisville, Kentucky, the experimental SuperTruck achieves a 115-percent improvement in fuel efficiency over a stock 2009 model.

That far exceeds the goal of the Department of Energy-backed SuperTruck program, which aimed for a comparatively smaller efficiency improvement of 50 percent.

Daimler received a $40 million Federal grant to develop and test the Freightliner-badged SuperTruck.

The improvements were confirmed by highway test drives in Oregon and Texas, city driving in Portland, Oregon, and laboratory tests at Daimler's Detroit engineering facility.

During the 312-mile Texas highway drive, the truck averaged 12.2 mpg while cruising with a gross weight of 65,000 pounds at an average 65 mph between San Antonio and Dallas.

CHECK OUT: Is Walmart's WAVE Concept Truck The Fuel-Efficient Future Of Semis? (Mar 2014)

To achieve these results, engineers adapted some components from production trucks, and added other custom features.

The bodywork incorporates aerodynamic elements available on the production Freightliner Cascadia Evolution, but adds a more streamlined grille with moveable shutters to ensure the truck's engine gets enough cooling air, according to TruckingInfo.

Daimler claims certain Federal regulations prevent putting the truck into production as is.

The company was one of three truck manufacturers awarded grants as part of the SuperTruck program. Another vehicle built by Cummins and Peterbilt achieved 9.9 mpg under similar testing conditions.

All of this interest stems from operators looking to save money, and manufacturers looking to stay abreast of new fuel-economy standards.

Current Federal regulations require heavy-duty trucks to achieve a 10- to 20-percent increase in fuel efficiency by 2018.