Commercial uses of the element sulfur date back centuries, but it may be the key to a new generation of batteries with high theoretical energy density and relatively low cost.

The principles of a lithium-sulfur battery have been known for decades, but practical solutions to the chemical challenges inherent in the cells remain to be found.

Now, a new study the journal Nature Communications (via ChargedEVs) describes a possible way to solve one of those challenges.

In a lithium-sulfur battery, the sulfur and lithium sulfides insulates the reactive elements, making it harder for ions to pass through--which requires the addition of conductive additives. 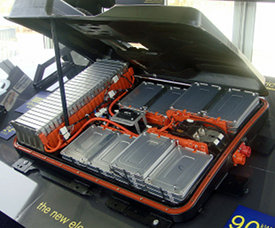 That, in turn, lowers the active fraction of sulfur that can react with the lithium to produce electricity.

There's a second problem, too: Sulfur slowly dissolves into the electrolyte that carries the ions from one element to the other, contaminating it and slowing ion passage.

While it's long been known that titanium oxide metal will stabilize the sulfur, a team of researchers from the University of Waterloo in Ontario, Canada, and chemical company BASF found that nanosheets of manganese dioxide work even better.

She noted the irony of having to "look so far back in the literature" to solve such an important problem for the modern century.

Those versed in battery chemistry can read the original paper, A Highly Efficient Polysulfide Mediator for Lithium–Sulfur Batteries.

The paper's excerpt reads, in part:

The lithium–sulfur battery is receiving intense interest because its theoretical energy density exceeds that of lithium-ion batteries at much lower cost, but practical applications are still hindered by capacity decay caused by the polysulfide shuttle.

Here we report a strategy to entrap polysulfides in the cathode that relies on a chemical process, whereby a host—​manganese dioxide nanosheets serve as the prototype—reacts with initially formed lithium polysulfides to form surface-bound intermediates.

The ​sulfur/​manganese dioxide nanosheet composite ... exhibits a reversible capacity [that is] among the best reported to date. We furthermore show that this mechanism extends to graphene oxide and suggest it can be employed more widely.

As with any potential breakthrough in advanced battery chemistry, it's worth remembering that promising lab results may not translate into working cells that can be economically produced at high volumes.

It's also important to note that the time between such lab results and incorporation of the resulting new batteries is at least 10 years, given the need for carmakers to test and validate early production cells before committing to use them in mass-produced vehicles.